There is a real distance between you and me

This profile is a mess, but so am I

The world is fairly simple, it's just me who's bizarre... with complication..

Head for the hills! The kitchen's on fire!

Now we know that life will change

> "Welcome to the ThunderDome, let us prepare for the rain to transform!"

> Warframe on the outside, Sackboy in the inside

> Today is all we have, so try for a moment to break from the torment and sing this to yourself: It's a pleasure to meet you.


“Are you feeling fine?”

Twintails are the greatest thing ever

You've pulled away from me in every single way.
You don't hear anything at all.
"I am a dirty, fast, happy, and emotional rock song."


I consider myself a perfect being

I accept all of my problems and shortcomings

I am so visceral yet deeply inept


How unfortunate that I don't post it here yet kek

You know that I’m a dreamer
I’m not a vicious schemer
Oh please won’t you.. ah

"I apologize if I do not care."


Voltear in Italian is Voltear unless it's in Spanish in that case it is ɹɐǝʇןoʌ. If it's English it's V̶̡͉͓̫̱͕͉̹͇̗̹͚͆̃́͋̇ͧͮ̿ͪͤͮ̔́́͝o̸̪̦̯̳̝̰̥̗͉̲̞ͭͤ͒̎̾͛̅͡ͅl̶̸̶̡͙̤̳͖̳̠͔̹͕̖͎̼̦͉̣̘̞̹͑ͥͥ̉͆̽̀͒̿̎̓ͫͩ̈́̀ẗ̵̘̫̖͔̰̙̗̯̟̲̗̫̞͓͓̜̼̦̙́ͩ͋̅͒̽̒͌͊̃́͝ȩ̸̶̷̦̪͇̜͕̬̭̤̺̼̬̬̬̜ͮͩ̀̃̾̎̿a̵̯͕̙̣͙͔̲͓̰͖̱̪͙̘̹̱̬ͣ̌͌͋̒̑̈́̀r̶̵̷̛̥̦̺̪̭̱̯̟̥̝͖͌̓̾ͩͯ̔ͯͨ̏ͩ̂. In oodle language it's Voodleltoodleoodler
One of my OCs has red eyes and a gun but in reality they're a huge dork
my iq is over 270 so if ever speaking speak to me again you speaking again you again ever speaking speak to speak you again speak speak to me speaking to me again you speak of crap then die
Through other people's descriptions of life...

That's the only way I have learned to express myself.

But to be honest that is part is my fault

But for any campaigns requiring me to roll spellcaster

im lost in thought and my memory lacks initiative 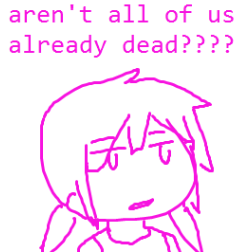 it's good to have one on your side

W1k is makes pizza for a living

Sol has money
Char is also a mod

said the knuckle to the concrete

i did everything right
i did everything i thought was right
I can't see anything over the horizon of the deep blue ocean, the black broken skies, and anything else in between.​
I am thou, thou art I
Thou hast acquired a new vow,

With the birth of the Prime Persona
I have obtained the winds of blessing that
shall lead to freedom and new power... 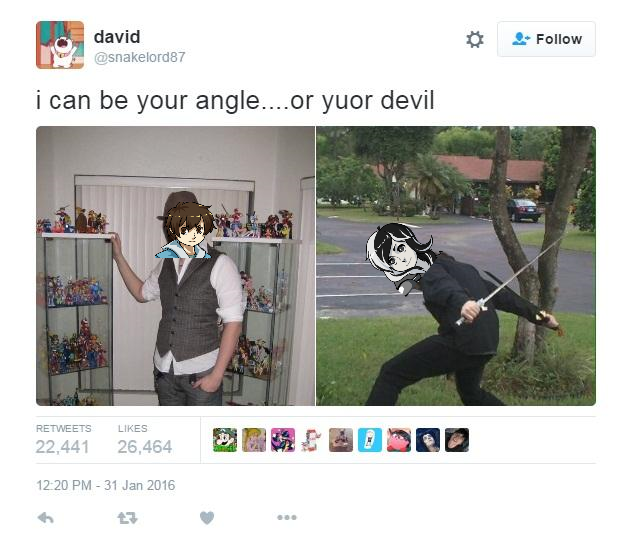 hes a bit of an italian but thats okay


"Not terrible, but not impressive."

Occupation
Swatting lies in the making

Check out my creative curator contents thread! Come on, grab a drink and give yourself a nice read!

"Let's have an even more wonderful conversation."​