Catnose said:
Sounds like there are plenty of issues with the new release? Can we expect a 1.3.1.1 release in the near future? I was thinking of holding off starting playing the new version, if hotfix version is on it's way. Or is there such a version coming? I can play some other games in the meantime.
Click to expand...

Only minor things as far as I can tell. I'm having no problems playing 1.3.1 in anyway. So don't let it stop you from playing.
I

@iVelseo
I suggest you post your problem where it's supposed to go that is in pc technical support : http://forums.terraria.org/index.php?forums/pc-technical-support.112/

this is a thread for bugs & feedback, chances are the problem is on your computer rather than a general terraria 1.3.1 bug
make a new thread in the appropriate forum & post what happens exactly, & all steps you tried to solve it already.

Is it intended for player-placed hive blocks to no longer drop honey? Or is that related to the liquid bug?

Phoenixruby said:
Is it intended for player-placed hive blocks to no longer drop honey? Or is that related to the liquid bug?
Click to expand...

Hmm, I can still get honey.. 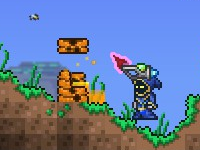 The puff of smoke for circuits without actual feedback loops is awkward. Makes lots of real world circuits require unnatural "delays". This spoils an otherwise awesome logic gate system. I assume it's to prevent an infinite loop. Maybe another way can fix that. Something so that only an infinite loop without flipflop in the circuit makes it puff. There are many online or installable logic circuit simulators without this issue (but not sure if terrarias pulse system is a complication). Would you consider fixing it if technically possible? Thanks!
Last edited: May 31, 2016

I'm not happy about the nerfs to statue drops or the inability to farm statue critters. I understand, and even agree, with the balance. But it just leaves me feeling very underwhelmed about the new statues.

Also, I don't like the Medusa's move to hardmode. If it was an artificial balance issue; then I feel whatever problems anyone had with Medusa before, will still have those problems in Hardmode. And if the problems were simply numbers based, those could have been adjusted without the removal from normal mode. Also, the nerf to the petrify attack removes a majority (if not all) of the Medusa's threat, so I'm still not sure why Medusa had to be moved to hardmode at all given that particular nerf.

Additionally, the Marble biomes feel a bit empty (emptier) with the move -- leaving the Hoplite to pick up all of the slack.

That's just my feelings about it though; I wish I had the choice to exploit the new statues, and I wish Medusa was untouched.

Feaw said:
Just reporting this in case it hasn't been yet; if you leave the world while standing on a weighted pressure plate, it will still be activated upon returning to the world, making that plate act opposite to how it should.
Click to expand...

@BuIlDaLiBlE, the changelog specifically lists which bugs were fixes for 1.3.1.1. If its not listed, its unlikely to have been fixed at this time! Rest assured, that issue is logged in our system, and hasn't been forgotten about.

Leinfors said:
@BuIlDaLiBlE, the changelog specifically lists which bugs were fixes for 1.3.1.1. If its not listed, its unlikely to have been fixed at this time! Rest assured, that issue is logged in our system, and hasn't been forgotten about.
Click to expand...

I understand the bugtracking system is complicated (even more when there's so much feedback), but removing 1 letter in code isn't that hard. I'm not trying to be rude, just logically thinking, dunno why didn't that get a fix straight away after it's noticed.
R

ToP said:
There have been a number of ways to get around the temple door in the past, and I am no longer sure which ones work or not
Click to expand...

I know a way but I'll be damned if I say anything for fear they fix it. It's got more uses than just bypassing that door.

BuIlDaLiBlE said:
I understand the bugtracking system is complicated (even more when there's so much feedback), but removing 1 letter in code isn't that hard. I'm not trying to be rude, just logically thinking, dunno why didn't that get a fix straight away after it's noticed.
Click to expand...

Bug fixing is a matter of priorities. There are plenty of "easy" bugs to fix, but the people making the actual code changes aren't the ones who are directly collecting the bug reports, and its very easy to get derailed and distracted from important bugs being worked on by every report that pops up "at the moment". Sometimes, other, relatively minor bugs DO get fixed early, because they are related to other issues and its easier to fix multiple ones involving the same mechanics. When you have enough issues, you can't fix them all, and you have to make judgement calls!

As for whether its hard or not, I learned long ago that its rarely as simple as expected for little bugs (and sometimes, its far simpler than you might expect for big bugs). If the pressure plate isn't detecting when someone logs out, that may not be as simple as "1 letter in code". It may require making multiple, additional changes to facilitate the new pressure plates interacting with circumstances like logging out while they are activated. These changes may inadvertently impact other mechanics, which requires additional oversight and retesting. So again . . . not as simple as all that.

Whilst I was exploring a cave in the forest biome, I found a explosive-detonator trap which was on top of a large deposit of gold ore. I mined through ~4 blocks of stone to get to the detonator and noticed there was no explosives anywhere. I mined the detonator using my copper pickaxe (new playthrough) and the wire didn't connect to any explosives whatsoever.

Gotcha! said:
Only minor things as far as I can tell. I'm having no problems playing 1.3.1 in anyway. So don't let it stop you from playing.
Click to expand...

Looks like I did right by waiting a day or two before starting after all .

Catnose said:
Looks like I did right by waiting a day or two before starting after all .
Click to expand...

I highly doubt it would have changed anything for you.

Gotcha! said:
I highly doubt it would have changed anything for you.
Click to expand...

Well, I just like as bug free experience as possible anyway . And who knows...

i'm so sorry.. =( i wrote that i couldn't start terraria via steam after update, but problem was solved by reinstalation steam.. i think the problem with steam started after updating windows =) nevermind..
T

I have one small issue: you can't use anything while you type. I know that a feature in 1.3, but now it's gone.

I don't think this is a bug, but a forgotten. The portal gun with a Xbox360 controller can only shoot one type of portal ?
This is just to prevent in case it would be important.

Would someone make the copper ore look like real unrefined copper in terraria ?
If you ask
How did you know this?
Im from Chile (Country with copper mines)
Also,
If you don't believe me, look for the second image of this page :
https://infogr.am/el-cobre-y-sus-caracteristicas