check logs, you probably messed up the install instructions and deleted the vanilla terraria.exe (needed for gog to work)
G

jopojelly said:
check logs, you probably messed up the install instructions and deleted the vanilla terraria.exe (needed for gog to work)
Click to expand...

I was not wrong! I did everything right and did not remove terraria.exe. Only it doesn't just load when I turned on the new tmodloader version!

Gretrut said:
I was not wrong! I did everything right and did not remove terraria.exe. Only it doesn't just load when I turned on the new tmodloader version!
Click to expand...

I find logs!
What should I do now after finding the client.log file?
A

Hi, my Terraria opens normally, tModLoader v0.11.3 doesn't open. I tested the tModLoader v0.10.1.5 and it worked. What is the reason?? and how to proceed??(Ps: Calamity Mod dont appers in search)

Abelishe said:
Hi, my Terraria opens normally, tModLoader v0.11.3 doesn't open. I tested the tModLoader v0.10.1.5 and it worked. What is the reason?? and how to proceed??(Ps: Calamity Mod dont appers in search)
Click to expand...

Search for your client.log on "C:/Documents/My Games/Terraria/ModLoader/Logs" and there will be the reason why, maybe you have a pirated version of the game (like me)
[doublepost=1565919241,1565919187][/doublepost]

jopojelly said:
The most common cause for this issue is pirated Terraria. You can check ":\Documents\My Games\Terraria\ModLoader\Logs\client.log" if you are unsure, the file should have hints to the cause.
Click to expand...

I already find the problem, thanks for the support!
C

ghostspy said:
I installed this mode I get this error constantly when I open the game please help I can not figure out what I can not install a mode at all
Click to expand...

try updating to 0.11.4, if you still have issues after that, edit the config.json and change
"AvoidImgur": false,
to true

Hey guys!First of all I'm sorry if my English isn't that good. Ok,now to my problem:I wanted to play Terraria with tML but when I was in the menu, a message that said, that something went wrong while loading, the problem where unknown, and that I need to restart my tML showed up. But how do I do that, and what's the problem? By the way, I already re-installed tML, but this message is still there.I'm sure that I replaced ALL files in my Terraria folder.

I hope, that somebody could help me! I would really appreciate it!

tModLoader
v0.11.4 has been released. 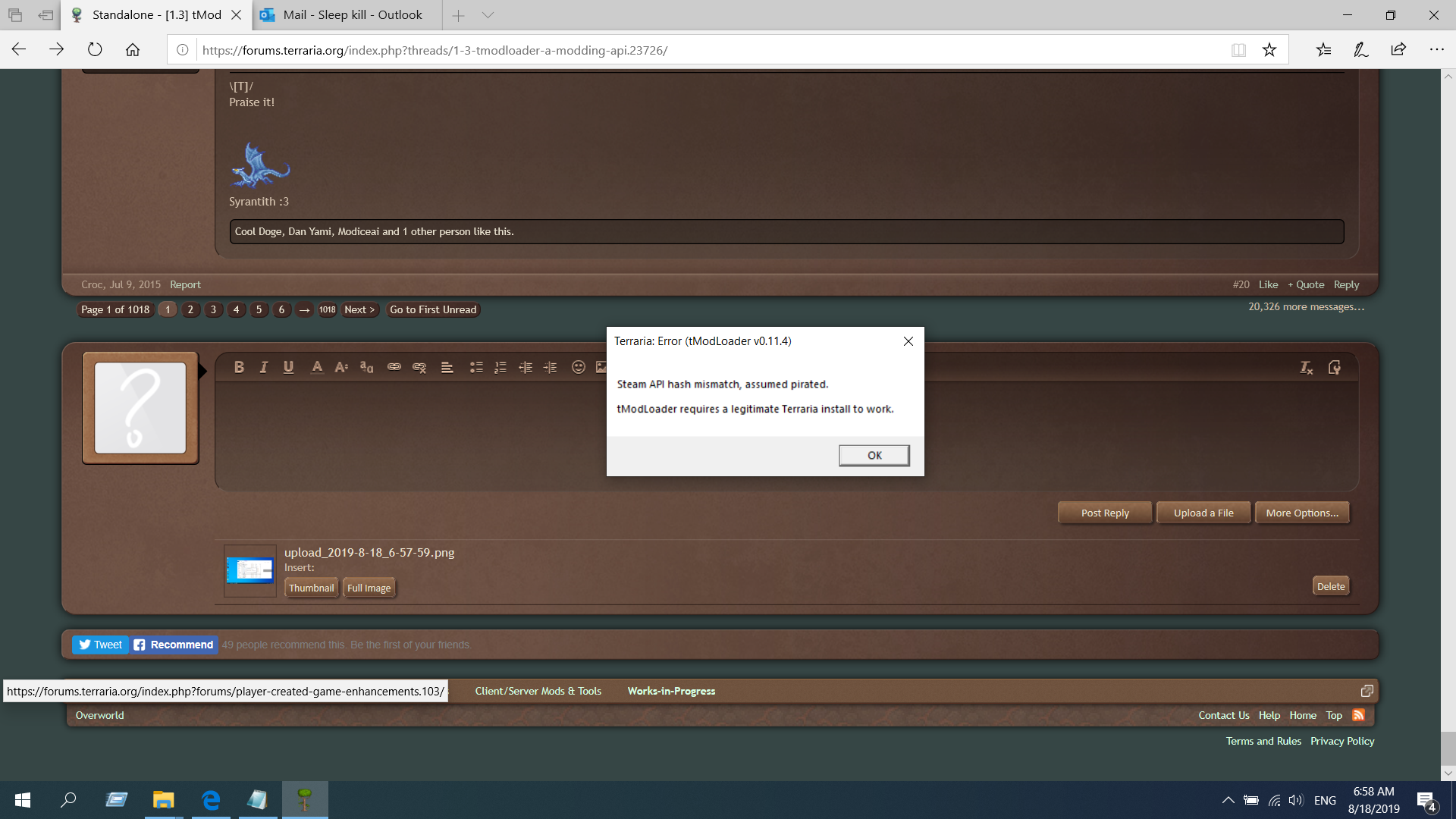 There are links to buy the game on the Terraria website: Terraria
G

Hello! 1.11.4 doesn't work for me! It pops up when I run and when I got this new version I made and the same error was!

Unfortunately, if you do not understand Polish, you can translate it to English, because I am from Polish and my computer is also in Polish.
E

Translation: impossible to create a file because it's already exist

I have the same problem... v0.11.3 and v0.11.4 both give me the error shown in the image that I uploaded attached to my post. (I also attached the client.log file showing the issue.)

For reference, I'm using an old PC, Windows 7, with pretty bad specs. I've installed and ran v0.11.4 successfully in two other Windows 10 PCs without problems, and v0.11.3 also works on them.


On this PC, I was able to use v0.10.1.5 briefly, used it to install Thorium + a few quality of life mods and played for a bit, without any problems. However, recently an error whenever I attempt to start Terraria has been happening (gives no error message, but it does generate a Logs.txt file that I also attached). Terraria.exe starts normally, the mods seem to be initialized normally, but it crashes in the "Setting up..." screen.
EDIT: got v0.10.1.5 to work again by going to My Games -> Terraria -> ModLoader and putting everything mod-related in a backup folder, then reinstalling the mods I wanted (sticking to the absolute essentials) and restarting.

Vanilla works normally, as I am able to enter a world and play without any crashes.

Any idea on what to do here? I've tried various versions, as well as reinstalling, and nothing solved either of the problems. If possible I'd like to make a version of v0.11 work, but if someone finds a workaround for v0.10 that'd be appreciated as well.

Technical mumbo-jumbo aside, I'd like to thank the developers for this tool... enjoying it a lot in the other PCs I set it up. I'm glad to have a tool that makes modding this easy