I've been experiencing a significant sound glitch with the Dimensional Casket possibly since TMod updated?/suddenly. For whatever reason, it causes the Sound slider in the audio settings to stay at 100%, regardless attempts to change it. When I exit the settings menu, it resets to 100%. I've tested it with other mods and with it and just cheat sheet. Seems reproducible.

Just having it in the inventory seems to cause the 100% sound setting glitch.

EDIT: Apparently this is a known glitch. I hope eventually there's a fix for it, since it's rather inconvenient.
Last edited: Jan 12, 2021

DragonMasterGD said:
which bosses in calamity mod drop which tiers of reversity coins?
Click to expand...

im sure that any prehardmode boss until WoF drop tier 1 coins, WoF to mechbosses tier 2 (cryogen and acuatic scourge), tier 3 plantera and golem (i think), tier 4 duke fishron and moon lord, tier 5 any post moonlord calamity boss till polterghast, and tier 6 yharon and SCAL......I think thats the order from calamity but im not gonna play it again since my pc cant handle the insane fps drop and anti butcher kill to verify this.
C

So the GRealm mod's Cosmic Potions will not be planned to add to the Brewer's shop?
I'm so sad because the GRealm itself is a very good mod, but gathering the materials for making the mod's potions is very painful.
Last edited: Jan 2, 2021

I'm not sure if this is the right place to put this, but for some reason when I put the fixed dimensional casket in my inventory it forces my sound up to 100%, is this a known issue?
Last edited: Jan 17, 2021

How do you get the rampage components?
R

yes, i have this mod... but i need to check out the version .
Is there any problem about alchemistNPC and thorium mod ?

roger00067 said:
yes, i have this mod... but i need to check out the version .
Is there any problem about alchemistNPC and thorium mod ?
Click to expand...

So is there a way to stop the Laetitia set from spawning the spore pods? cause they heavily impact the dps I can do due to the fact they give invincibility frames to enemies.

VVV101 said:
Currently, there is not way for fixing that.
I messed up and put price scaling code for Tinkerer inside players checking...
I can suggest buying something in SP by host then relogging.
Click to expand...

You still haven't fixed this after 6 months of being aware of it, have you stopped supporting this mod? 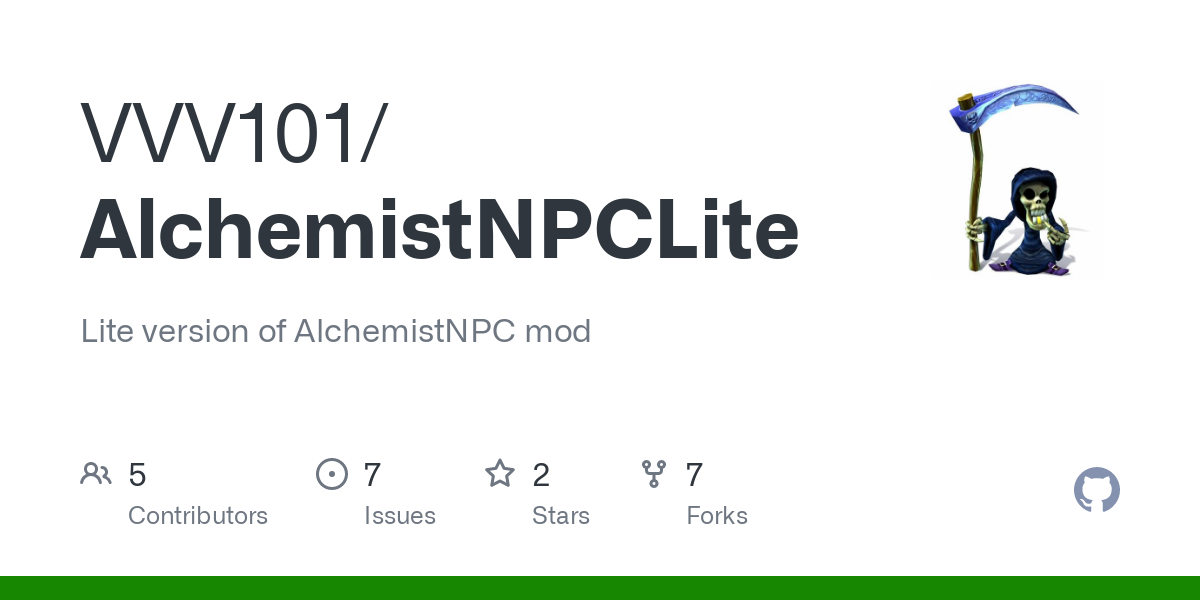 Lite version of AlchemistNPC mod. Contribute to VVV101/AlchemistNPCLite development by creating an account on GitHub.

Code:
Just get rid of this surely? Why do we need price scaling depending on the players? Seems completely unnecessary to me.
Last edited: Mar 11, 2021

VVV101 said:
This mod adds 8 NPCs, which are selling most potions in the game and some basic ingredient. NPCs has custom sprites, animations, can attack.
Spawn condition for Alchemist, Brewer, Tinkerer & Jeweler is kill the Eye of Ctulhu. Spawning condition for Young Brewer is having both Alchemist & Brewer alive in the world and Hardmode.
Spawn conditions for Operator is to beat EoW/BoC and Wing of the World is placed inside free housing.
Spawn condition for Architect is to have at least 3 NPCs alive.
Spawn conditions for Explorer are secret (but they are related to Torn Notes).
Spawn conditions for Musician is to beat Skeletron.
Some custom phrases while both NPC are spawned.
Mod has full Russian language support (and partially, Chinese translation).
New Discord: Join the AlchemistNPC Discord Server!
OLD Discord: Join the AlchemistNPC, MoreAccessories+ Discord Server!
Github: VVV101/AlchemistNPC
Link to the wiki:
AlchemistNPC/Moreaccssesories+ Wiki
There is also bot_helper channel in Discord. But its info may not always be up to date.

_Kickem007#1531).
Upgrade v4.3
-Added Emagled Fragmentation and Otherworldly Amulet.
1st - Can be bought from Alchemist for 8 gold while 2nd lying in inventory. Also can be gathered from Dungeon Guardian.
On normal mode they drops from 5 to 10, on expert from 15 to 20.
25 of Emagled Fragmentations could be transformed into 2 vanilla pillar fragments.
2nd - Can be gathered from Dungeon Guardian with 10% chance on normal mode or 20% on expert.
Big thanks to

Big thanks to «Temple» for his MorePotions mod.
tModLoader - MorePotions


My co-authors:
Frank#1531 (First Co-author, made some sprites)
RebooT#8695 (Another coder)
Skyline222#0060 (Mostly an idea generator)
Shade#0216 (Spriter)
somebody0214#2327 (some sprites, Architect NPC)
drh#1109 (Translator, helper)
ELMO#0138 (some sprites)
Other help:
Thanks to drh#1109 for fixing grammar errors and improving localizations.
Thanks to Badluck Gamma#9283 and Chiya#0662 for testing new builds.
Thanks to somebody0214#2327 and DESPERATION#4629 for testing Russian localization.
Thanks to Dark;Light#2919 for help with some multiplayer code (server sync).
Thanks to Neptune#0662, TheGameDevourer#3954, somebody0214#2327, and DESPERATION#4629 for testing v6.0.
Thanks toCheezegamifor other price changing method.
Thanks tojopojellyfor helping with making other shops and multiplayer issues.
Thanks to Count Tobi for texts fixes.
Thanks to Sir Mirsario for helping with sprite.
Thanks toLuiafk and DivermanSamfor helping with Rampage Components code.
Thanks to 抗药又坚硬汉化组 (SBMW GROUP) for their Chinese translation of the mod.
Thanks to monkeyzilla32 for awesome SAO pixel art:
Maple Kirito (made in minecraft)
And of course, biggest thanks to RiverMouse for the original idea.
Wow! Mod had reached more than 1KK downloads! You guys are awesome! Thanks for your support.

Apparently, this can happen

Something can line up with a button in a way that causes the casket to register something on a vendor when you click holding the casket. Now I can only trade with the merchant.

(bruh.png: holding click, note that the arrow holds the GUI by the merchant button) 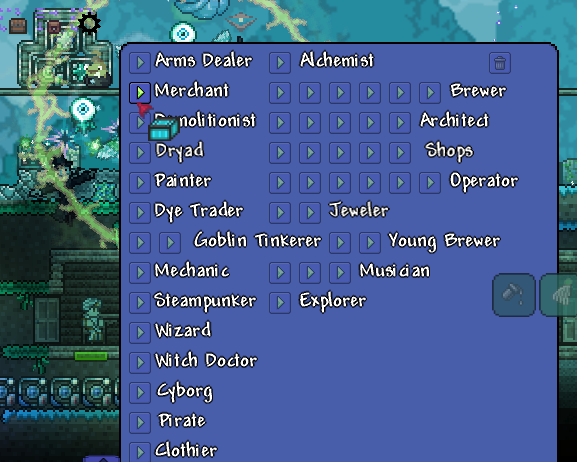 (bruh 2.png left: using casket from hotbar by clicking on screen, GUI appears with merchant button under arrow again)
(bruh 2.png right: after releaseing mouse, releasing seems to have registered as a click on the merchant button) 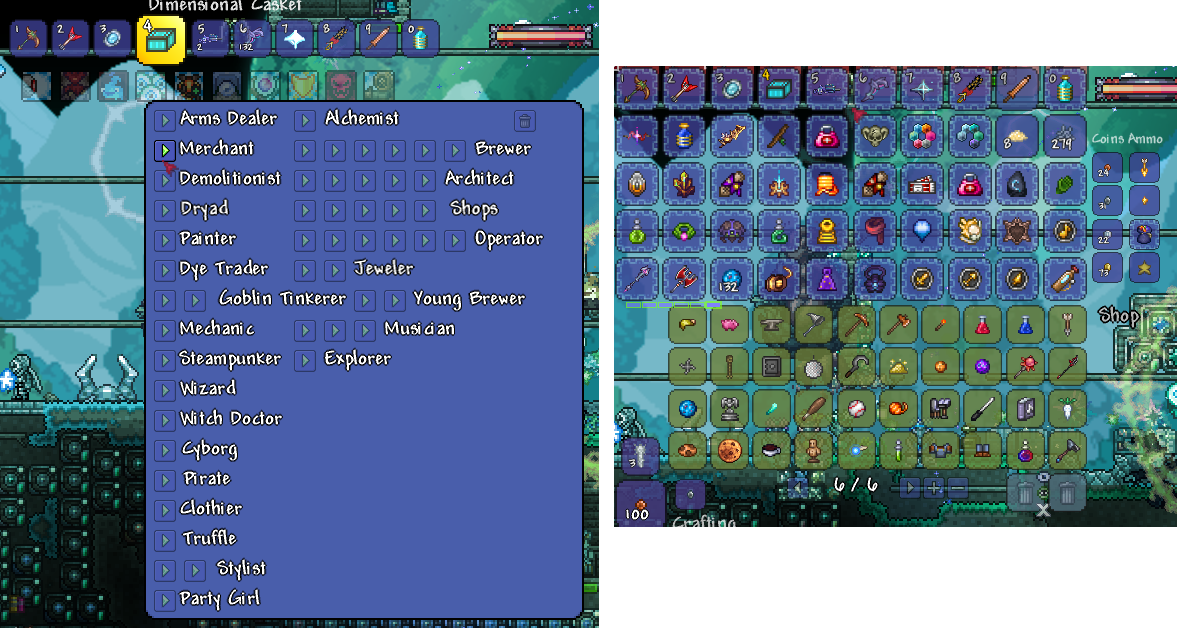 Edit: restarting tModLoader freed me of the merchant's curse. 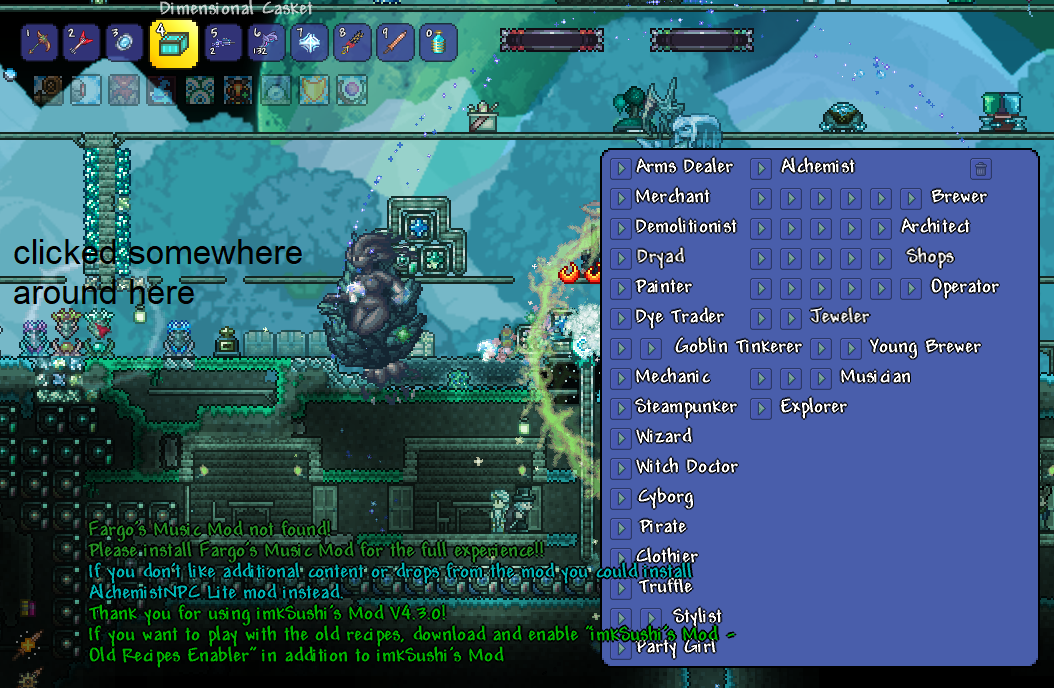 So ive been playing Calamity mod for a couple days and I decided to get the alchemistNPC lite mod because I was too lazy to get the ingredients for potions.I downloaded the mod off the mod browser of TModloader and when I downloaded it said problem with Calamity and my computer was getting very slow so I went and deleted the mod and it went back to normal so. Idk if my pc is a piece of literal garbage or Calamity and AlchemistNPC Lite is not mixing even though it should.

i think the 1.4 alpha is a little wonk. worked yesterday but i keep getting an error that crashes my game lol 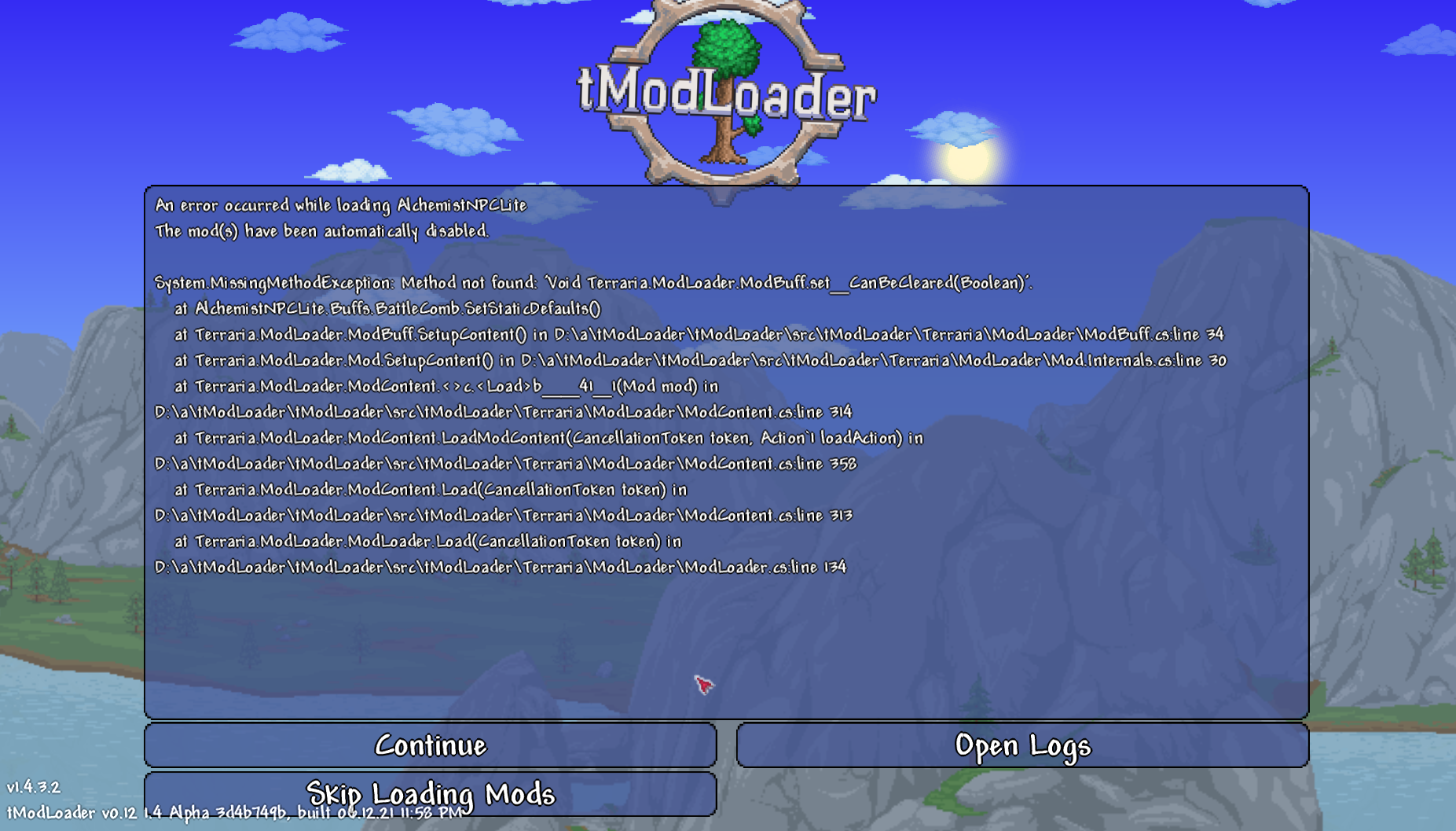 worked fine when i played like 3 days ago, now i cant get this to work and i'm not even sure why it's talking about D:\, my one and only drive has the letter C
S