What Is This Mod?​
Assorted Crazy Things (or ACT for short) is a mod that aims to implement a wide variety of content, ranging from the mundane to the humorous. Over the years, this mod grew wildly in size from a small mod to a large collection of fun ideas, thanks to the introduction of a very patient and heavily-overworked coder. With the eventual full release of tModLoader for 1.4, we've been working hard to bring this mod to 1.4. Now, let's skip the fluff and go straight into the meat of the mod.

This mod contains a wide range of pets. No, seriously; we've got a lot of em. Each pet was given a unique recipe, location, or acquisition method that fits the pet, and some have been hidden behind interesting recipes. Be sure to ask the Guide for help when you see that something is listed as a material! One of the major attractions of the mod is the Cute Slime pets; a collection of slime NPCs that resemble cute girls. In regards to their art, we went a little overboard in making sure they had unique designs and expressive faces. On the coding side, we made sure that they had customization available in the form of costume parts that can be crafted with silk. Show the Guide some silk and look at the bottom of the list for a knitting set; these are used to make those costume parts. We also added a way to customize some of the other pets, so be sure to check out our wiki for an explanation on that aspect if you're interested! 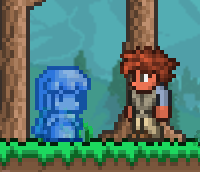 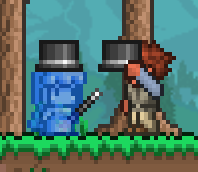 Pets are not the only thing we offer in Assorted Crazy Things. We have a wide variety of interesting equipment, ranging from summoned mechanical drones to shoes that make you slip and slide! We have a bunch of accessories fit for helping struggling players to defeat a difficult boss to a variety of vanity balloons, an assortment of simple yet entertaining weapons ranging from pocket sand that confuses weak enemies to a backpack full of slimy companions, and even a suit of armor fit for a reckless summoner. We are primarily focused on summoner-themed content, as I personally enjoy making monster sprites, but we've got a bit of content for melee, ranged, and magic as well. 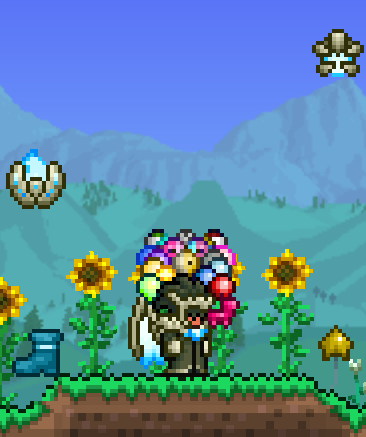 Finally, we come to another aspect that I've just hinted at; monsters! Initially, this mod was small and only had a handful of vanilla sprite edits. Now, we've expanded quite a bit from the basic modded enemies into having a plethora of interesting monsters. Specifically of the slime variety, but there are several enemies that fill a few interesting niches while remaining as inoffensive as possible. You may even mistake some of them for vanilla entities, as I've tried my best to make sure that they fit in with the vanilla game aesthetic. For a bit of fun, we've set up many of these monsters so that you can capture them with a bug net. These specific enemies are simple-minded, and they will become your pet when captured with said net. Not all monsters are so friendly, of course. Especially not one that you may encounter after diving into the dungeon. 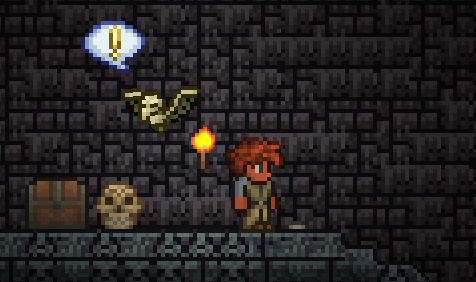 The concept of this mod was to have an assortment of crazy things. We've stuck true to that, as the majority of our content was thought up on the spot. We have no real aim, no narrative to tell, and no agenda to follow. If we come up with something and we like it in the overall scheme, it gets made. Usually at the expense of a certain coder's sanity, but still. Dive in to Assorted Crazy Things, and enjoy a large amount of non-intrusive additions to the world of Terraria!


Note: The 1.3 version of Assorted Crazy Things will remain as it once was. It will not be updated any longer, as we have focused heavily on updating for 1.4.
Click here for the 1.3 wiki!​
Last edited: Jun 30, 2022

Looks like an enjoyable mod which I hope to see more work in.

Dang, I wanna help with this now

I suggest making a Discord for this

EDIT: Found a problematic flaw with the mod after uploading. Don't worry about the details, it's fixed when you update! I promise!

Update 11/26; Mod received a bit of love. Got a bunch of folks who said spawns were overwhelming, and I had to agree. Full changelog in the opening post's pastebin.

- New Monsters
- Lower spawn rates for everything (Please let me know how it is!)
- Still no flamethrower or rifle like I initially listed!

@RiverOaken : I don't do discord that often, so I won't make a discord right now, but I have a name I use somewhat sparingly. I'll send it to you via whispers so we can try to work something out.
Last edited: Nov 27, 2018

Is this the mod that has the wanderer's journal? Trying to remember what mod it is because I can't use it.

These sprites are beautiful! You should feel proud. ^_^ I am most definitely going to be keeping track of this delightful mod. I can't wait to see what you do with those slime girls. Why do I have this feeling that they would be animals or pets?

*Installs mod* Gets swarmed by every type of slime girl that exists in the mod currently(I think), loves life. Blue, pink, raibow, black and purple right? I love you for this! Thank you for making the world more fun to explore! I now need to get those other pets...

EDIT: Can someone make a "I support" banner for this mod please?

Mod updated to version 1.1.2! New icon, new content, and more! Word of early warning; The mod will be undergoing a bit of an internal name change soon, and that requires a new mod altogether. This is for future mod pack reasons, should it ever be included. Right now, I have a stupid filename that has nothing to do with the mod's title, but I'll be rectifying that soon-ish. This release will warn you about that, as well as let you know the details when you load up a character.

Full changelog for this update: (Also in opening post)

Code:
Edit; I also updated my avatar, though that's unimportant and not interesting news.

Double Edit: I know it's a bit silly to release an update only for the update to be obsolete later with a new filename. I just felt like releasing what was out right now for those who wanted to try out the new stuff while the tedious reworkings are being done behind the scenes.

Triple Edit: New name is up. Download the latest version with the GOLDEN border from now on!
Last edited: Dec 2, 2018

Harblesnargits said:
View attachment 214081 WELCOME TO ASSORTED CRAZY THINGSView attachment 214081
Most recent version: 1.1.2
​
Welcome to Assorted Crazy Things, my second time modding in Terraria. My first time ended in failure as I lost everything, and had to start fresh. Start fresh I did, as I managed to put together a new WIP mod full of wonderful and delightful things.

WHAT THIS MOD DOES;
This mod adds quite a few different things to the game, be it monsters, critters, accessories, or whatever else. There's a lot! As this is an early release, I want to make it clear that what I've made is not perfect. Nothing is ever perfect. As of now, you can expect things to simply work. Most of my monsters have low spawn rates as not to disrupt a normal playthrough too much, and my items are not balanced in a way that makes the game unfair. At least, that is the goal. I want to add to the game without detracting from it, and that is a difficult challenge.


SAMPLE OF THE CONTENTS:

View attachment 213959
Minor typo: 36 pets. Too lazy to fix.
View attachment 213960
GEE WILIKERS BATMAN, THAT'S A LOT OF STUFF:
You're right on that. I spent a lot of time just goofing around, having fun, asking of my peers, and finding ways to make things become things. That's not all though; I plan to add MORE.

MOD CONFLICTS: None so far.

This post was recently edited with what I have SO FAR on my end, and does not reflect the current state of the mod. Expect an update in December!

I want some light pet (with variant like slime girl pet)...

It's fixed in the next update

Is that an anomalocaris enemy?

The gold, silver, and reflective dyes (and probably other metallic/shiny dyes) do not appear to affect the slime girls. Or rather, they do recolor them, but don't add any shine effects to them.

Zauber Paracelsus said:
The gold, silver, and reflective dyes (and probably other metallic/shiny dyes) do not appear to affect the slime girls. Or rather, they do recolor them, but don't add any shine effects to them.
Click to expand...

works right now for me, though the dev build is ahead by a few changes, also to the slime girls. http://prntscr.com/lu074u