I've gone a pretty long time without having an actual discussion page for my mods, and so I wanted to make one here. This is also my first time using the forums, so if I mess something up, scream at me and I'll fix it.

Hi! This is my place for holding the mods I work on. I mainly made this so that people could talk about the mods, as well as offer feedback about them.

Loosely inspired by the Minecraft mod Thaumcraft, Thaumaturgy is, at its core, a hybrid between a content mod and a utility mod. You won't find shiny new bosses, sprawling biomes, or earth-shaking world events. Instead, what Thaumaturgy aims to do is add measures to the game to make menial tasks easier and to add variety to combat. To get started, either play an Expert world or beat the Eye of Cthulhu - either condition will prompt a new NPC, the Thaumaturge, to move in, who will provide the thaumatrestle, which is a workbench required for all things auric. The mod uses two main components: auric shards, of which five can be made from a fallen star, and auric cores, of which one is made from two mana crystals.

Thaumaturgy has three pillars: synthesis, transmutation, and replication. Synthesis involves the creation of magical objects, tools, and devices; transmutation involves turning one material into another; and replication involves duplication of mundane materials through auromancy. The Thaumaturge sells the foci for these three pillars for 50 silver each, and you can place a focus near your thaumatrestle to access that pillar.

Some examples of items Thaumaturgy offers include:
Thaumaturgy is available on the mod browser. It's also my first mod, so if I mess something up, please let me know in this thread!

You can find its source code on GitHub. 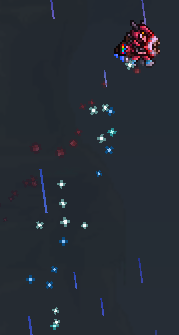 A little while ago, the Calamity mod introduced several challenge items to the game. These items added additional challenge to the game but greatly increased rewards; for instance, the Armageddon item made any hit kill you while fighting a boss, but dropped 10 treasure bags upon beating it.

These items have been in a state of constant flux since their addition, and come tied to a massive content mod. Though I like Calamity, I found myself wanting its runes during a vanilla playthrough, and so I adapted the idea into a standalone mod. Thus was conceived Challenge Runes. For no cost, four different runes can be crafted at a Demon or Crimson Altar, and activated at will* to toggle their effects on and off.

*The runes do not like being used during boss fights.

Note: I kept the names of Armageddon and Defiled so that their effects could be well-understood between the two mods. If MountainDrew or anyone from the Calamity dev team has a problem with that, please let me know and I'll change them to something different.

The runes include:
There is also a rune called Apocalyse, which enables all four runes at once. During Apocalypse, enemies have a 1% chance to drop a Basalt Chunk, which sells for 1 gold. Bosses are guaranteed to drop 3 Basalt Chunks during Apocalypse.

You can find its source code on GitHub.
Yet Another Boss Summon Shop Mod

Yet Another Boss Summon Shop Mod, or YABSSM, is meant to be a lightweight, low-footprint mod for letting you buy the summoning items for vanilla bosses for money as you beat them. Many mods serve this purpose, but they often conflict, doing things such as adding new town NPCs (which can mess with existing town plans) or editing the inventory of NPCs commonly used by mods (such as the Dryad.) YABSSM avoids both problems by adding these items to the Clothier, who is almost never utilized in mods.

YABSSM also includes "easy" summoning items for the Wall of Flesh, Plantera, and the Moon Lord. Specifically, they summon the boss instantly, without requiring any criteria to be filled first. No more guide murder! Finally, the Moon Lord summoning item is buyable after Lunatic Cultist, not Moon Lord himself. I wouldn't wish farming Lunar Events to retry the Moon Lord on anyone.

You can find its source code on GitHub.
Rod of Discord Hotkey That Doesn't Suck

A hotkey for the RoD is hardly a groundbreaking idea, and I'd wager they've been around as long as tModLoader has had hotkey support. In spite of that, though, all of them that I've played with suffer from one of three fatal flaws: they're tacked onto the end of an already-existing mod, the Rod must be kept in a certain inventory slot, or the mod equips the Rod, uses it, then unequips it. All three of these have problems that have made using them frustrating for me.

To that end, I made RODHTDS. Quite simply, it gives you two hotkeys and that's it - one for Safe Teleport, one for Unsafe Teleport. If you use Safe Teleport, you'll teleport to your cursor, but only if you don't have the Chaos State debuff. Unsafe Teleport will ignore Chaos State, possibly causing damage. The Rod of Discord itself isn't actually equipped or used in the entire process - the mod instead uses the same vanilla checks and runs the teleporting code itself.

You can find its source code on GitHub.
All of my mods are currently licensed under the MIT License, meaning you can use their code or icons in any way you see fit, or adapt them to new forms. I do ask to be credited, but that isn't a requirement.

Comprehensive, detailed changelogs for all of my mods can also be found at their GitHub repositories.

glad to see you've come down to the forum. now I can tell you that I love how you handled Thaumaturgy. It's such a fun way of dealing with potion making! since stars and mana crystals kinda lose importance after reaching max mana and the Star Cannon gets outclassed, it's nice to give them a new usage too(that can last up to lategame!). overall, it's a nice addition to any QoL package that shines in creativity. Definately a personal favourite!
I will now try the Challenge runes out, they seem fun

KBitegp said:
glad to see you've come down to the forum. now I can tell you that I love how you handled Thaumaturgy. It's such a fun way of dealing with potion making! since stars and mana crystals kinda lose importance after reaching max mana and the Star Cannon gets outclassed, it's nice to give them a new usage too(that can last up to lategame!).
Click to expand...

I appreciate it; the potions were, iirc, the first thing I made in the mod, and it was very deliberate. I think that "reusable potions" in Terraria modding tend to be incredibly easy to get; usually either bought from an NPC or crafted at a workbench into a reusable version. I wanted to deviate by making them at least require a certain point in progression, and then afterwards a bit of work put into them.

Unrelated - I'll also be putting YABSSM on this thread shortly.

Flesh Rune
Your armor is cut in half. Enemies drop various potions

I like the idea of adding more runes than just the first four. I think slow movement speed feels really sluggish and generally not fun to play with, so I'd probably massively drop acceleration instead of just movement speed.

The ore idea in particular kind of got me thinking; I imagine that I would probably make them drop an ingredient that you can craft into different ores instead, so that you don't have to grind for ores and sift through ones you don't want. (The same principle might not apply to potions, since potions are always useful. Maybe make killing enemies give random buffs instead? Just spitballin' here.)

I know your Thaumaturgy mod is mildly based off of the Minecraft mod Thaumcraft. So as a suggestion, I would really like there to be Thaumium Tools and armor, like the ones in Thaumcraft. You can use the sprites I attached in the zip file if you want. (The helmet looks best with the player hair showing). Since the Thaumaturgy mod is about magic, the armor should probably give magic stat boosts in my opinion.

Those are good sprites! For the most part, however, I would rather not implement thaumium directly, as I'm worried about being a direct ripoff of Thaumcraft rather than a homage. Instead, I've been using alchemical brass (soon to be starbrass), and I'll use those sprites for the starbrass - albeit a little recolored.

Edit: 1.0.18.4 is going onto the mod browser shortly. Included is the Starbrass armor set, which uses modified versions of the sprites you provided. I put you into the credits wherever I can think of. If you'd rather I not use the sprites after recoloring them, then let me know and I can replace them.

Since you don't want to add thaumium directly, you could add tools and stuff under the name 'arua infused' instead of 'thaumium' (thaumium pickaxe = arua infused pickaxe, thaumium bar = arua infused bar, etc.)

Despite my reluctance, for now I've implemented it under the name "auric steel", and included it as a crafting ingredient for auromechanical armor as well as a new weapon, the auric steel waraxe, which has a high crit chance and deals magic damage instead of melee damage.

One more suggestion: Some resprites for the potions and elixirs.

Those are very good - much better than my codersprites. Thank you kindly; I'll put them in and credit you fully.

I've temporarily removed Challenge Runes from the mod browser due to issues with its function and general instability caused by my messy code. I'm currently in the process of rewriting the whole thing from the ground up, after which I'll put it back on.

Edit - Now back as version 1.0.1. Singleplayer is confirmed to be working, but multiplayer isn't; give any and all experiences you have with multiplayer in this forum thread so I can work towards making it stable. At the worst, no rewards will drop; your character and/or world won't be messed with at all.
Last edited: Aug 17, 2019

I have a question about Thaumaturgy.

The recipe browser mod can't tell me how to make Starbrass; how do I craft it?

Mythrrinthael said:
I have a question about Thaumaturgy.

The recipe browser mod can't tell me how to make Starbrass; how do I craft it?
Click to expand...

You buy it from the dude. Rather pricey for the long road, but useful if you want a Magic Focus Build.

HallowKingJerrold said:
You buy it from the dude. Rather pricey for the long road, but useful if you want a Magic Focus Build.
Click to expand...

He doesn't sell it:

Yes. But after I beat the Wall of Flesh, everything appeared as it should, including the special bottled water.

Bro... Honestly, I'm a pretty big fan of Thaumcraft. It's nice to see that someone made a Terraria variant to it.

I also really kinda wanna see the spritework for this, I'm gonna see it when I get home.

Does anyone here know how to get Starbrass??

It's been a while since I played Terraria, so sorry for the wait. It turns out I accidentally flagged Starbrass to sell after EoW/BoC, not after Skeletron. I've pushed a quick update to fix that!
You must log in or register to reply here.
Share:
Facebook Twitter Reddit Pinterest Tumblr WhatsApp Email Link
Top Bottom