Hey, have you ever realized that some day your Terraria world will be almost completely full of corruption/hallow and that you will have to spend lots of platinum on solutions if you wanted to "fix" this ? Well then this suggestion might be something for you.

Introduction:
If you already know how Corruption/Hallow works, you can skip this part, but it can't hurt to revisit it. Also for this guide I mean Corruption AND Crimson when I only say Corruption.

With 1.1, the Hardmode Corruption and Hallow was added, both biomes are able to spread by doing the following things:
Both can:
grow grass on dirt blocks
convert normal grass/background walls/vines
convert stone/sand/ice
The corruption has an extra feature which allows it to convert any near mud blocks into dirt, jungle grass and jungle thorns, effectively enabling it to eat away the entire jungle.

Ok, but at least you know roughly where that corruption/hallow V is and the corruptions that were right there from the beginning of the world, right ? No. Each broken demon/crimson altar spawns 1 random block of hallow/corruption somewhere on your world. Have you built a 3x3 wall around your jungle and checked every single block that there is no corruption ? Well if you break another altar, because you either need ore, accidently broke it with the drill mount or another friend just did, all that is possible and puts your world at the danger of getting fully corrupted once again.

While 1.1 was an revolutionary update and got quite a lot of content, it also had it's flaws, like for example only having one or two "ultimate weapons" no big choices in weapons or the biome spreading. I think the original thought was that Hallow/Corruption should be everywhere as it's the only biome you will need, why have those basic weak biomes when you can have this new stuff and get more money ? You won't even need those old biomes for crafting the new stuff. And well, that wasn't really thought out well, as it makes it impossible to get past ressources and there aren't even certain enemies for some biomes, for example the oceans will just spawn corrupt mummys, no sharks, nothing.

Now Corruption was always able to spread but it was heavily reduced:
Thorny Bushes and Corrupt Grass were slowly able to turn nearby grass into corrupt one, and corrupt grass could spread on dirt of course, both could be easily stopped with sunflowers, and since the spread is super slow and most natural blocks usually get in the way, this was never really an issue.

1.2 did add a few things against it, first of all, once you defeat Plantera, Corruption/Hallow does get slowed down to 33% of their original spread, Chlorophyte Ore can also convert dirt into mud, althrough this effect is very slow and I haven't really seen it being useful.

And then there is the Clentaminator with the Solutions, a wonderful tool but rather expensive, costing 2 platinum itself and a full stack of solutions costing about 2.5 platinum.
What's my problem with this ?
It's possible for the complete world to turn into hallow/corruption like originally intended, after a long playtime, since random blocks of both can spawn anywhere.
Sure, you can say that you will notice those biomes when travelling around, most players don't seem to care through and removing them is really expensive, also they don't simply make an existing one harder but completely REPLACE it sometimes making it impossible to get certain things.
Even if you remove it, you can miss one single block and it will come back again, yes, all those gold coints wasted because you tried not to waste that much solution while cleaning a biome.

What changes would I suggest:
Now I know that some of you like fighting against hallow/corruption, I wouldn't mind an item that allows corruption/hallow to still spread as agressively as it did before plantera without those limits, but you see there are quite a lot of people who don't want to spend all their time fighting biomes that were just put at RNG places.
In one world I could for example get in no trouble with the random spawns at all, while in the others, the corruption could go right through the jungle, eating away the entire surface, random corrupt/hallowed blocks spawning inside the ocean and taking it away, limiting shark fins and other items.

As for the Clentaminator "it allows changing you biomes of course it's expensive duh", yeah that's true, but unless you are fully in endgame you always need money, for expensive modifiers or other things, and you can't really keep running away until the endgame and then start cleaning, almost noone is going to do that. 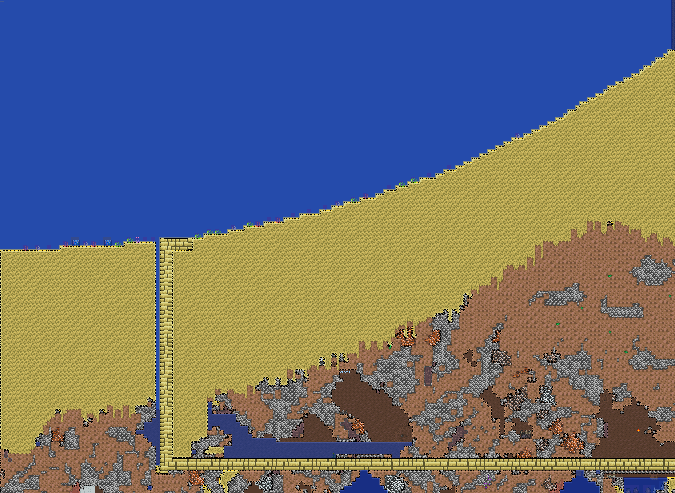 Better Biomes
A completely different suggestion than the one above, this would change the way how some biomes work in Terraria: