hiquirio said:
my mod browser is not letting me update calamity mod
Click to expand...

Its not on the browser currently. To big of a file. Your going to have to update it manually.

Moonshadow said:
You can find it in the underground desert. Sometimes you can find it aboveground at night, too. (Stay close to the hole)
Click to expand...

I believe a bug fix.
S

In the future would a low FPS mode be achievable? My computer is very weak and can barely handle the game as is

Noctus said:
Where is the information about V1.1.7.01? (How many have added new items and etc.)
Click to expand...

Main post really hasn't been updated, but @Ziggums posted this a few pages back:


Ziggums said:
Hellow fellow terrarians! As you can see, the update is out, and with an update, comes a changelog!
Version 1.1.7 changelog:
-Several new enemies!
-The Profaned Crags Biome!

If you already have a world, dont worry! There is an item that spawns it inside your world in case it hasnt been generated yet. (Do not freak out if it freezes, the game is simply generating the biome, be patient)
The biome will continue to be expanded upon in Later, smaller updates.
-3 New Bosses!

-Providence, the Profaned God! Pre-devourer of gods boss, Pay close attention to your suroundings, as attacks Can and Will come from everywhere.

-Ceaseles void, spawns inside the dungeon, post-providence, drops a unique weapon and spawn items for the DoG.

-Storm Weaver: Spawns in the "space" Biome, drops an ingredient for the Devourer Of Gods Spawner.

-A New Way to play Melee!

The Counter Scarf: Provides several "true" Meleeboosts, and a 100% guaranteed dodge, which further increases damage, allowing you to get close and personal with enemies!
(Dropped by demon mode Eye of Cthulu)

The mod will recieve an entire soundtrack treatment, stay tuned for future tracks from the genious himself!
[Re-posting in other websites without DmDokuro's permision will result in immediate action]
-Several new items, Including a Post-Devourer Of Gods armor tier!
taking the total up to 520, find them all!

-and much, much more.

I'm assuming Alpha And Omega got scrapped in favor of Braelor and Statis for future updates?

Cryogen downed on my ninja character. 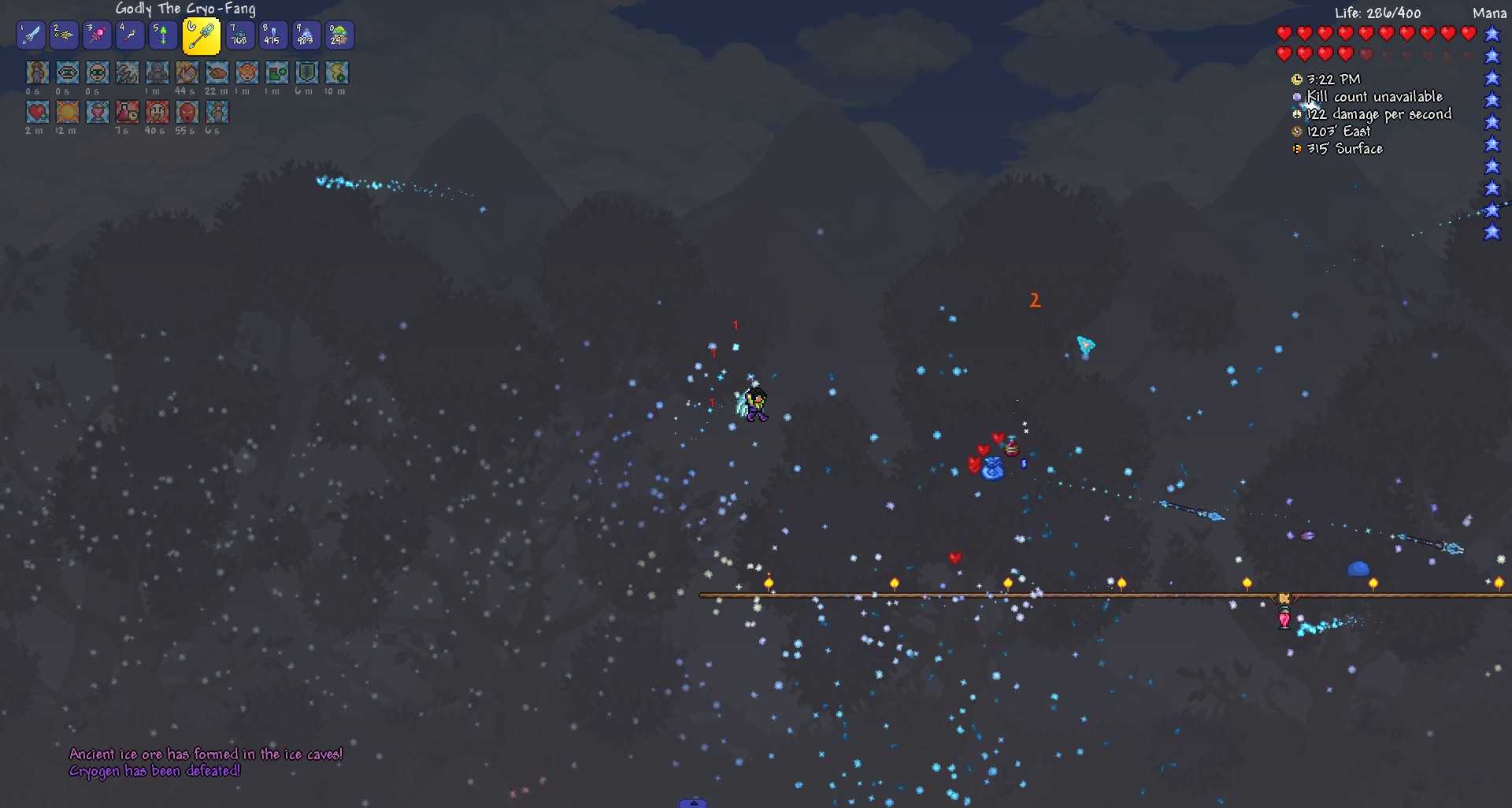 Definately the most fun out of the three pre-mech bosses I have to fight in my playthrough.

Khaelis said:
Main post really hasn't been updated, but @Ziggums posted this a few pages back:

Thank you very much, Khaelis!

1.1.7.01 Merely patched a glitch with the boots, it's not the next major update.

Ziggums said:
1.1.7.01 Merely patched a glitch with the boots, it's not the next major update.
Click to expand...

I just need information for my wiki, and I got it

Mechantera said:
I'm assuming Alpha And Omega got scrapped in favor of Braelor and Statis for future updates?
Click to expand...

Yes Alpha and omega where scrapped for Braelor and statis

For some reason, even though I'd died, the Slime God didn't despawn.
The two halves are just kinda chilling at random points in the underground. Anyone know why this happens?

I think my character has been lost. all it shows is a blank icon character which has been favourited. can anyone help. please

L_Strongo said:
I think my character has been lost. all it shows is a blank icon character which has been favourited. can anyone help. please
Click to expand...

Go to mod browser and open up updated and where you can see the update on the mod and click the update and go back to your mod and reload the mods and done your mod has now updated.
L

so i'm going to have to restart. curse you apple!