So this is an RP about dragons. "Why dragons?" you may ask. Because dragons, that's why. Anyway, maybe I should get on to the rules now since I've already explained the main point of this roleplay.

1. Your character doesn't have to be a dragon, but dragons are preferred, this is about dragons, after all. But if everyone makes non-dragon characters they will not be accepted. Remember, this is meant to be about dragons. (This rule is subject to change if there are too many non-dragon applications, this RP is primarily meant to be about dragons.)
2. You can have up to three characters and however many NPCs you want.
3.There is no single gm for this, but anyone can gm, however if there is a disagreement, I will have the final say in what goes.
4. Your characters have to be accepted to get in (Well, primaries do.), mainly to keep power in check, you can either apply here, or send yours to me privately.
5. Speech in draconic (dragon language) should have asterisks surrounding what is being said.

Other:
This RP will be in a medieval fantasy setting. (So no guns.)

Backstory:
Will be revealed as we go.

Personality:
Vulnerable to guilt, doesn't tend to talk about his past.

Powers:
Has power over electricity, can sense it, and cannot be hurt by it.
Appearance:
Human, longer, blonde hair

Backstory:
Will be revealed as we go.

Powers:
Not really, just skill and equipment.
If you want to design yourself a dragon: Dragon Maker

Appearance: (originally this but without a tail, but I thought, why not have a tail?) 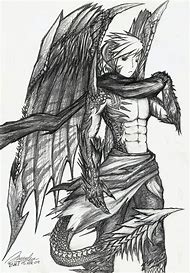 Backstory: Jackalore, or simply Jack, is a human-dragon hybrid whose family was outcast for his hybridism. Dragon fighters, collectors, and hunters sought him for his exotic appearance, which was one never seen or studied where he came from. He was often thought of as a freak by humans and a monstrosity by dragons, and as such was hated among all. He left his home country after receiving so much hatred simply for existing, and sought for people, human and dragon alike, who would accept him for who he is.

Personality: Jackalore is untrusting due to his harsh past, and very secretive. He refuses to open up about his early life, and as such is a very mysterious fellow. However, when you get to know him, he is kind, loyal, protective, and loving. Alongside these traits, he is a jokester and a prankster at heart. He will often introduce himself by pretending to be a monster.

Powers:
Fire immunity- He cannot be harmed by fire, and can swim in very hot substances like boiling water or even lava.
Fire hands- He can conjure fireballs from his hands.
Flight- His wings are larger than his body, so he is very capable of flight.

Other:
- He has a mostly humanoid appearance with dragon hands, feet, and wings. His scales are black.
- He is both named and inspired by my younger brother.
Last edited: Mar 21, 2019

Maybe slight rewording of the backstory would be in order, they wouldn't know about DNA. And on my part editing the application format to include appearance.

Defure said:
Maybe slight rewording of the backstory would be in order, they wouldn't know about DNA. And on my part editing the application format to include appearance.
Click to expand...

Name: Trebonth
Appearance: A very small, barring the height of half of metre, and length of 2 metres, cyan-ish fur (yes, he's literally covered in that). The wings, although short, allows him to glide short distances, too. He seems to have a scar on a belly, and various injuries in their body. The eyes are cream-reddish, with narrow irises.
Backstory: Well, what can I do say about this little... dragon? He kind of was abandoned in their hatchlinghood, as there were already too much dragons in his breed. Then, he struggled to life... well, he still does, but somehow manages from scavenging. By the way, you do know why he has a gaping scar on their belly, right? Well, they got hit by a sharp hurty thingy, and that's why he has it.
Personality: Essentially, he's a mostly reckless dragon, he doesn't really think before doing something. He also trusts other dragons way too much. It seems like the loneliness is annoying them, because they're trying to get attention, to mixed result. But if successful, well, he seems to be a mindless childish at the first glance, but a playful one once you meet them. They still are inept of their powers, and they will probably gasp if he accidentally injures/kills something. Especially they'll love the juicy flesh, and can't eat fruits - he spits them out...
Powers:
Freezing Scales - while still a hatchling, their scales sustain an average of -10 degree of Celsius temperatures, making him kind of heat drain. The colder climate, the better he feels, though, and the colder they can get.
Icy Spikes - Although not mastered, it can use fangs, and the water stored in them, to create very fragile, but piercing spears made out of ice. However, it's not a very good weapon - they require him to not get dehydrated.
Gliding - Pretty self-explainatory.
Other:
Only speaks a dialect of Draconic that every ferals will know.

Uh, I think we can start with you, me and Bubby (well, that's three persons, too)

I'm going to ask something. Do you want to start with others (although that isn't very many right now), or separate?

Well, if I'd started together already, it'd contradict my plans for Trebonth, so... separate with option to find the group later on.

IC thread has been started.
https://forums.terraria.org/index.php?threads/draconic-adventures.78566/

Backstory:
Al' Xulfest, is the descendant of a long fallen nation of Dragons, feared and envied for their natural ability to wield many elemental powers. That power came with a weakness however, hunters could prepare ahead of time based on the color of their scales and exploited it, wiping nearly the whole species from the land. Some learned arcane magics to inhibit this limitation. Being born after the fall of his nation, he was taught by one such survivor and knows general spells in most spheres of magic.

Personality:
May come off as aloof at first, but has a rather inquisitive nature and prefers to observe someone for a moment before an introduction. He is otherwise stoic in most situations and may even poke fun at those he becomes close to.

Other:
Wishes to have his own kingdom and to perhaps take his nation back some day.
Last edited: Apr 5, 2019

I'd recommend another way to handle the shifting as there's no time system here right now. Of course so it won't be too powerful.

I was just going to have you call the shots on that one, perhaps every day then?

I could do that, in game time of course.

Aaaaaand fixed! Just a note, when it gets to the light/dark part, you can flip a coin or just decide which happens.

It'll be a flip unless I have something planned for him that would require a particular one of the two.

Sweet, I'll be sure to get a post in tomorrow after work! (If accepted of course)

Question, is there anything I should know about this world? I am aware that there are dragons as well as those who hunt or raise them. Is there any common laws or rules for how magic and overall society works?