Console Dual Threat: Terraria is Coming to Wii U and 3DS

Wanted to address a couple of concerns raised in this thread:

The Nintendo development is being handled by different teams to the other console versions. Our efforts there aren't holding up other updates - 505 remains committed to updating the existing versions and that work is ongoing. We'll have announcements there I'm sure soon, but I understand your frustration. Updating console is much Iess straightforward than PC, and I'm happy to share some specifics on that if you're unfamiliar as to why that is. Not sure what info you've been privy to in the past.

The 3DS version is being handled by CodeGlue. It's a different team from mobile, so again updates there won't be affected. They are doing a great job, and I can't wait for you to see it. It's obviously not going to be a port of the mobile version, because the second screen and physical controls need careful consideration. We're playing to the strengths of the console, don't worry.

Wii U is with Engine, and uses the second screen and touch controls to build on what was already a very solid base in the console versions.

With Legend of Zelda slipping to goodness knows when (sad face), we're rising to the challenge of filling the adventure deficit on that platform.

I'm only involved with getting it made, the price is not my department. You'll have to wait for further announcements there, sorry I can't help.

Staff member
Re-Logic
Administrator
No idea, but you have to remember that a combination of hardware manufacturer "cut" and extra costs of manufacturing for things like carts tend to force costs to be different vs digital only like PC.

That and pricing is never as simple as "make it whatever you want" on console...

Again, no idea of the price but it's worth a bit of background on the different dynamics. 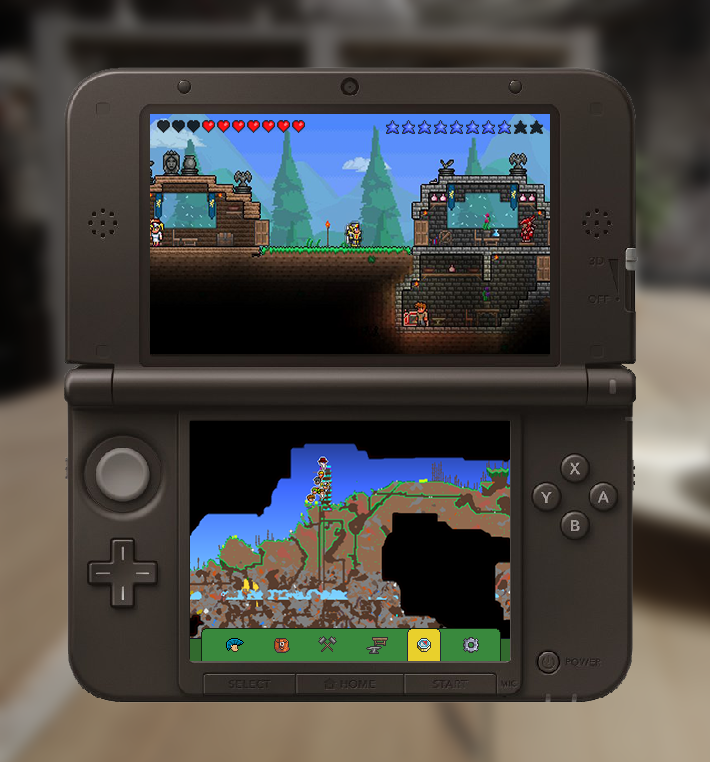 Someone leaked this image a long time ago, supposedly finding it in the files of the Mobile version. Can you possibly confirm the legitimacy of this?

Will this version get constant updates like the other versions?

Someone leaked this image a long time ago, supposedly finding it in the files of the Mobile version. Can you possibly confirm the legitimacy of this?
Click to expand...

That's not an actual screenshot from 3DS, no.

That's the plan, yes. The first post launch updates are already specced out.

This is great, terraria is going to be one of the most widespread games in existence
not that I'm complaining

AW, heeeelllll yiiiiissss!!!
Now I can tell my friends to join me online!

Deanzor said:
The Nintendo development is being handled by different teams to the other console versions.
Click to expand...

WOOT! the console and mobile versions were, in my opinion, a little badly made in comparison to the PC version. another team! this makes me happy

Deanzor said:
That's not an actual screenshot from 3DS, no.
Click to expand...

Yeah, I wasn't sure. Good to have clarification on that.

GoldenTerrabyte said:
Yeah, I wasn't sure. Good to have clarification on that.
Click to expand...

Wanted to ask again since my question got swept up by the comments. Rewording my original question... Would you know if there Is any control-scheme for lefty's planned? I heard that the Circle Pad Pro uses some processing power so the chances of that being able to be used for movement are probably zero.

I don't mean to offend anyone, but I wish the 3ds version was made geared more towards the New 3ds...I would hate to see such a wonderful opportunity dragged down so it would work on an older system equal with a newer one.

505Games said:
505 Games and Re-Logic are proud to be able to finally - and officially - confirm that Terraria will indeed be coming to the Nintendo Wii U and 3DS platforms! This represents a massive opportunity to bring Terraria to a whole new set of gamers whom may have never seen Terraria before - as well as a chance to explore what might be possible in the game with dual screen functionality. We hope you share in our excitement around the potential here!

Of course, we are well aware that there have been a number of rumors and leaked information around this from various sources - so, the way we figure it, we owe you a bit more to help make this announcement even more newsworthy! Also please note that any "release dates" given out were not official.

Let's start with some never before seen pictures of the packaging - and we will hope to bring you some screenshots that show off some of the new functionality in the weeks to come:

​
Also, please welcome @Deanzor, a 505 Games representative who will be working on Nintendo Terraria!

He's shared some information and answered some questions here in the thread, so be sure to check it out:

Question:
How will multiplayer work on 3DS and Wii U?

Question:
Will items such as the Plumber and Hero Outfits have their coloring returned to the original, in light of being on a Nintendo console?

Question:
Will this version get constant updates like the other versions?

To close out our announcement, let's give you what you are all wondering - an estimate on release timing! Of course, you will have all seen various published dates based upon the earlier rumors/leaks. For the most part, these are guesses or estimates. We are sharing here today that the expected launch for Terraria on Wii U and 3DS will take place in early 2016!

We have a few more surprises in store for this coming Holiday season, but we will save those for another time. Join us in celebrating this move that will finally bring Terraria to all of the major gaming platforms!
Click to expand...

nope, you must buy a 3DS

Will 1.3 be on the Wii U and the 3DS version when it will be released?

it's funny because i opened a tread about the Wii U version... and now it will become true! x3