I just got an idea for dyes that could be used in 1.4. I wanted to suggest this now seeing as how 1.4 is gonna be the last update. I was researching dyes on the Terraria wiki, when I realized there was no way to make specific dyes. Stuff like mixing certain dyes and having different patterns weren't in the game. So I decided to make this!

You get the Reflective Red Dye by mixing Reflective Dye and Red Dye. If you could do this with other special dyes, it would add so much customization in terms of animated and changing dyes. (of course you wouldn't be able to mix stuff like team dye with any other color)

The Cyan-Purple Up-Down Gradient is obtained the same way as the Cyan-Orange Dye, which I'll explain later. This dye basically introduces the idea of being able to craft multiple patterns.

The Blue-Orange Dye* would let you mix two different gradients to get a specific gradient. Combining 2 Gradient Dyes can give you 4 crafting outcomes. If you combine a Yellow Gradient Dye and a Cyan Gradient Dye, you could craft a Lime-Blue Dye, a Lime-Cyan Dye, an Orange-Blue Dye, or an Orange-Cyan Dye. If anyone has any idea on a better way to craft it, please let me know.

Finally, the Orange Spectre Dye is obtained by mixing Orange Dye with Ectoplasm. The idea behind this is that you can mix dyes with certain things to get armor effects you wouldn't normally get otherwise. With the Spectre Dye, your character is semi-transparent, with Hallowed Dye, your character has a pulse effect, etc. This would be a great addition because then you could get specific armor effects while not having to wear that specific armor. Normal dye of this kind without coloring would only take a bottle of water and the specific material at a dye vat.

And those are all of my ideas! Please tell me which ideas you think are good ideas and which ones might need fixing. Thanks for reading! ~ Minemaker 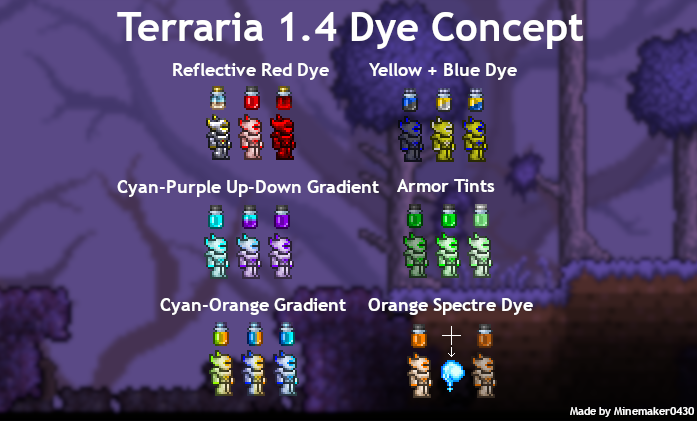 *It's supposed to be Blue-Orange in the image, not Cyan-Orange.

It's an interesting idea but I think it will take a lot of work to code for the Devs.
Furthermore, look, size ordered right now?
We are very close to this update, I think the Devs are not going to put this in the game, I'm sorry to disappoint you.

Terrarian Gamer Θ said:
It's an interesting idea but I think it will take a lot of work to code for the Devs.
Furthermore, look, size ordered right now?
We are very close to this update, I think the Devs are not going to put this in the game, I'm sorry to disappoint you.
Click to expand...

That doesn't mean people shouldn't make suggestions. Maybe someone will make it into a mod.