Remember a few State of the Game's ago when we mentioned that we were working on something pretty cool that would potentially change the way that people approach certain aspects of the game? Well, the time has come to give you a peek behind the curtain at Terraria HQ and let you in on some juicy details surrounding this new feature coming to Journey's End!


Building has always been a staple of the Terraria experience - but functionally-speaking, there has never been any real reward to making fun creations outside of the adoration of the community. Similarly, everyone builds their central base and sort of shoves everything there... sure, some folks build in other biomes, but only for fun. What if we told you that Journey's End is going to change all of this up, raising building up to being a core gameplay feature with its own rewards?

Towns will reward building like never before. Taking the time to spruce up your base(s), plan for NPC placement, and building bases in multiple locations will now provide you a variety of benefits that have never before been available. Of course you don't HAVE to partake in this new system, but we think you will find the positives in doing so to be quite tempting indeed.


Excited? Scared? Let's take a few minutes to dive into how this new approach to building works, shall we?

During Journey's End development, we conducted a focus group with all of the Terraria NPCs. Outside of some very strange requests (no, Guide, we cannot 'remove all doors at night'), their feedback was very clear: they are tired of being shoved into tiny cubicles or L shaped tubes and they want you to know this!

In order to help raise NPC morale so that they could be at their very best - and to reward players who go that extra mile to treat their NPCs with the respect they deserve, we are introducing the NPC Happiness System. How does it work? What does this mean for you? Read on....

Adding nice furniture and aesthetics doesn't directly affect NPC Happiness... but it sure will make you feel better about yourself when your friends come over for a visit.

Pretty much everyone does the same thing when base building right? A big central area right at the initial spawn point... crammed with NPCs and crafting stations and storage and more. At best, people stick up a single room with a bed for boss fight respawns. We can do better than this, and what about all of the other poor biomes that would love to have you set up shop in their neck of the woods, and - again - those poor NPCs may not want to live in the Forest Biome!

But wait, there's more! If you group at least 3 NPCs together in a given location, it will be recognized as being a Town. Towns are not subject to enemy spawning - outside of invasion events - and you will get to hear the super cool town music when you visit!

All together, with Journey's End in conjunction with the Happiness System, you will be rewarded for building multiple bases across the scope of your world like never before! 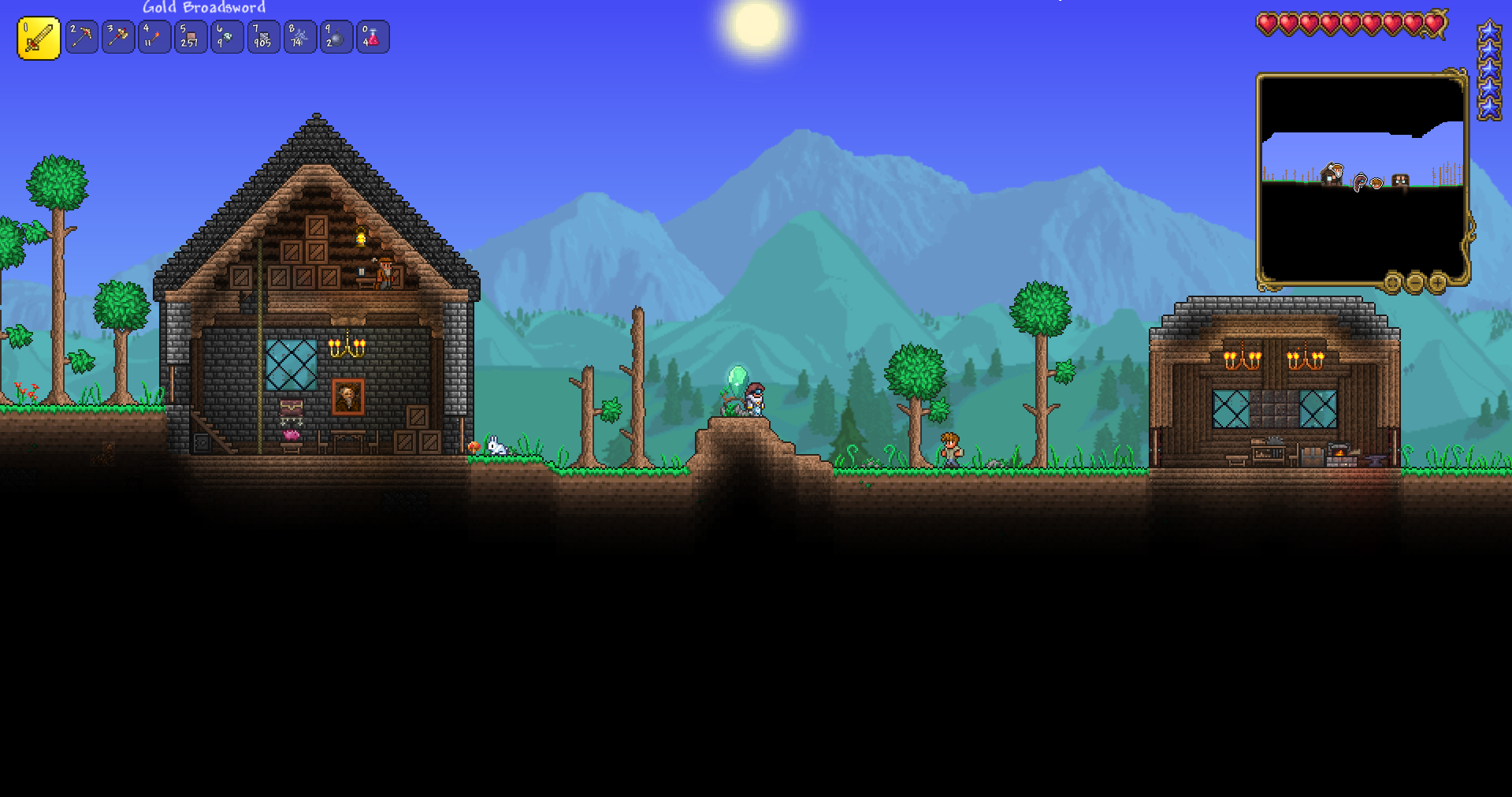 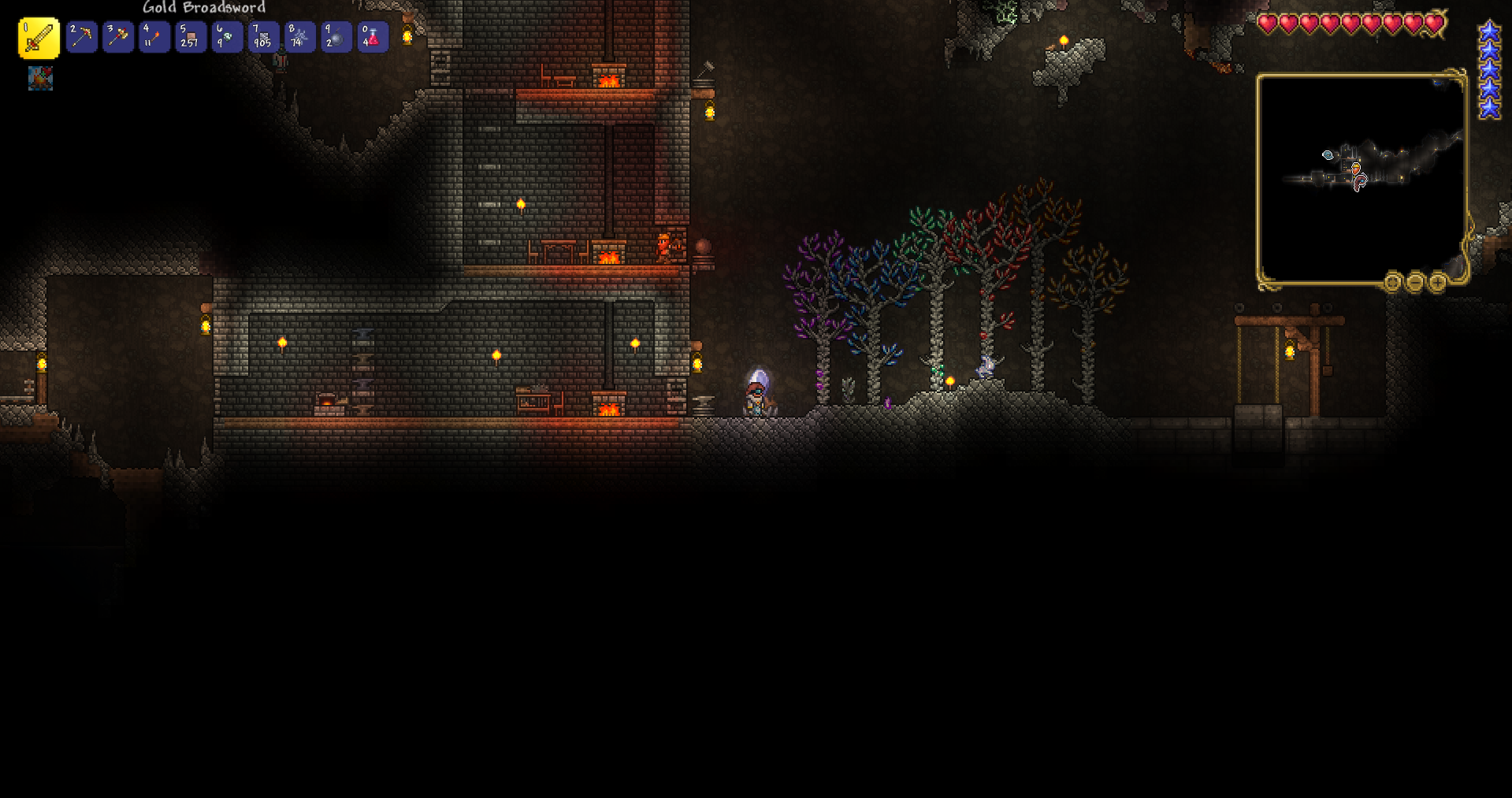 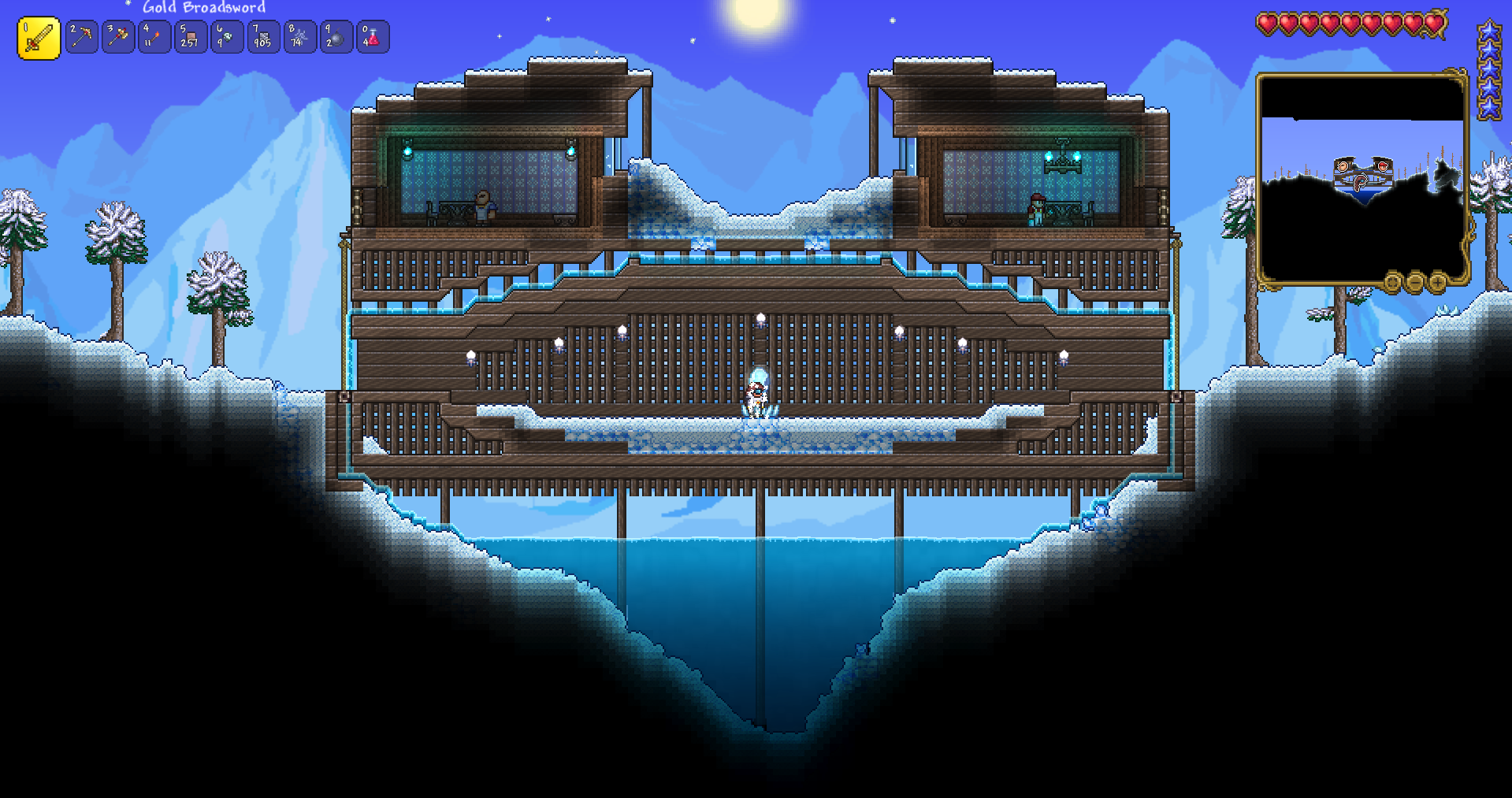 Well, that is great and all, but how will you get around your world to visit your now happy, but far-flung NPCs? Let's bring it all together and close out with the brand new Pylons!

We briefly mentioned these mysterious Pylons in our section on things you can get with happy NPCs. So what are these, and why should you care? Well, if you have enough happy NPCs in a given biome, you will unlock the use of a Pylon for that biome. Pylons allow you to instantly teleport from one Pylon to another! With Pylons in place, your "big central base" now becomes an interconnected network of cool outposts all over the world, allowing you to get around quickly without the need to lay tracks or teleporters... and providing you a home away from home wherever you are! 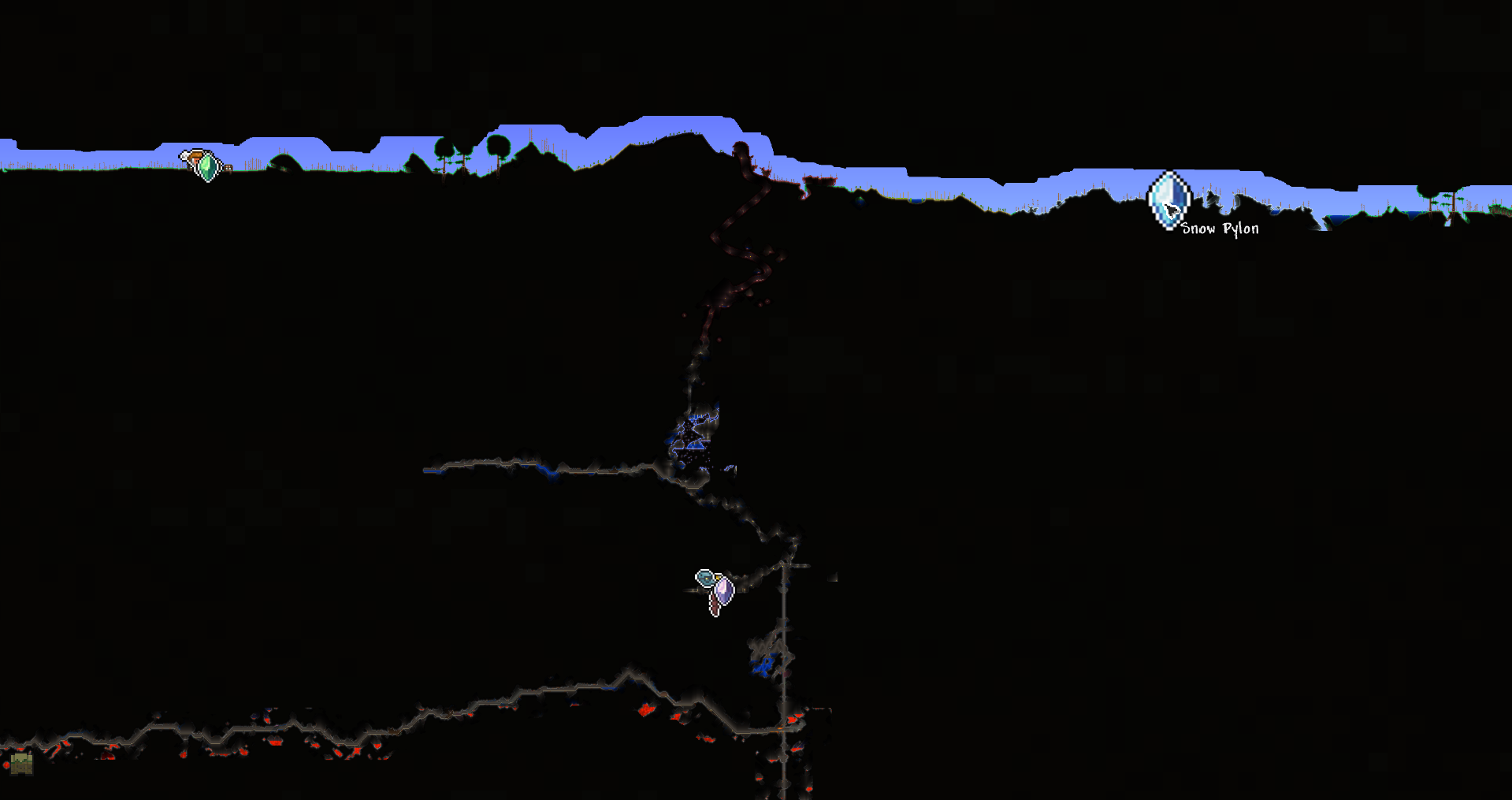 You can only have one Pylon of a given biome type placed at a time (so you can not have, for example, an Ocean Pylon at both Oceans)

Pylons must be placed in their aligned biome in order to function (you can place them anywhere else, but they will not work!)

Pylons must also have two nearby (and living) NPCs in order to function - again, the idea here is to reward building those bases/towns!

Pylons cannot be used during Boss Battles or Invasion Events!

Pylons are quite easy to use. Once placed in their aligned biome, you simply click on a nearby pylon. This will take you to the map screen where you can locate another placed pylon to which you want to teleport, click it and off you go!

That's all for today! Look forward to more Terraria: Journey's End Feature Articles throughout the next few weeks up until Launch Day, May 16th, 2020!​
Last edited: Apr 29, 2020

Whaaaaaaat this is such a big change, super cool to see!

You just keep giving more reason to be unbearably excited for this update. Stop it.

I think this is amazing

Wow, this is absolutely huge! I havent been so hyped for an update in so long...

gem trees? I didn't know I needed those so badly until now

ok this is big

this is going to change a lot of things

That looks like so much effort, but I play Terraria for the grind so I'm pretty excited and optimistic for this feature!

That's a cool addition. I hope this will motivate me to make actual bases, not just boxes with some chests lol

Good gravy. I got all worried for a moment there when I realized that my town NPCs would be divided into different biomes, but I Totally get it now. I really like this addition! It's pretty darn exciting. It'll definitely help make the world feel more alive and vibrant.

I used to exclusively build a giant walled-off town in the sky to avoid wraiths and everything, but I'm not so afraid of building smaller towns. I'll still have a central unified mass chest area for storage in the middle of the world, but at least this way it'll bring everyone closer together without seeming like they're being kept apart.

I wonder what biome the Merchant will like, given that he sells those marshmallow things in the snow biome.

as someone who enjoys making mini biomes for my npc's, i can definitely get behind this idea

That's such a good idea! I love this town mechanic and pylons. I can't wait! ❤

Welp, time to build a bunch of mini biomes around my base. Also whats up with those gem trees?
T

This is great, I'm getting more and more excited for 1.4 with every spoiler!

Early game teleporters? Lower NPC prices? This is an awesome incentive to build in other biomes and treat your NPCs well. Absolutely brilliant feature!

Those new trees and that bunny in the underground base look awesome as well!

This is bonkers amazing cool. I've always been a function over form builder in the past, but between block-swap and these new town/pylon mechanics, well maybe that's gonna change!! Hype train is a choo choo choo-ing!

This is awesome! Can't wait for a good excuse to make fancy bases in each biome.