Coming from someone who has over 4300 hours on this game, I guarantee you guys that this feature is an amazing addition. I'm no builder, and I usually build NPC prisons above my storage system and call it a base, but this feature is still amazing to me because it'll give me a reason to stop making the exact same house every single time I play this game. I finally have incentive to build houses across the world instead of placing 46 wood blocks in a line, dividing it into 5 10 block long rooms, expanding it upwards, and throwing chests and crafting stations on the bottom floor every single time I create a new world. This allows for a ton of creativity in making houses, and even if you don't like building and just prefer making NPC prisons, you can still do that just fine. Just make a tiny NPC prison in each section of the world for the appropriate NPCs and use the pylons to get to them whenever you need. If anything, this allows for NPC prisons to be way more organized and look better instead of a huge box of random NPCs in one spot that you have to scan through in order to find the right NPC. Avoiding the almost certainly negligible increase in price is incredibly easy and doesn't require any building skills whatsoever, it just requires you to build 8 sets of 3 houses instead of 1 set of 24, plus it gives you the bonus of teleporting anywhere in the world. I legitimately don't see why people are complaining about this.
R

It would be nice to have a specific panel/menu/list with all pylons. I mean, it is not so comfort to search exactly pylon you need via all map (hello large worlds).
Whatever it will be in release, I like it.

Wow, this is too good

Look at wood wall on the screenshot. We will be able to rotate wall position? 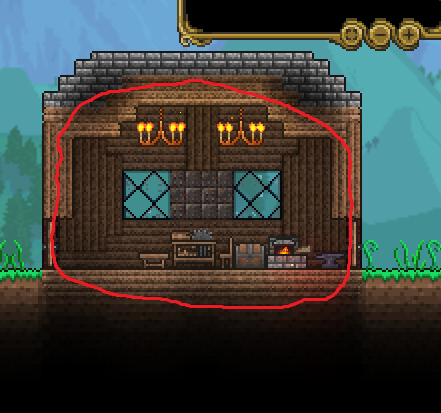 Ceramicalten said:
Look at wood wall on the screenshot. We will be able to rotate wall position?
View attachment 269184
Click to expand...

Nicol Bolas said:
I have an idea: why don't you tell us how it works in detail, then if it really is "overwraught", we won't be complaining. It sounds crazy, I know, but providing enough information to allay peoples's concerns might, just might... allay their concerns.

If you don't want "guesswork and assumptions", then replace them with facts.

I mean, look at your initial post of the thread. Look how much it talks about NPCs "are tired of being shoved into tiny cubicles or L shaped tubes and they want you to know this!" That's a pretty direct statement that this feature exists to prevent that. So when you go on to say "NPC's are happier when they are not overcrowded with other NPCs ", the natural assumption is that "tiny cubicles" == "overcrowding".

If that's not what the feature is doing, maybe you could describe it more accurately.

That's kind of irrelevant, since you have to make an NPC happy to get a Pylon for a particular biome to begin with. The issue here there is how you acquire Pylons, not how you use them.

Or more to the point, the issue is linking happiness to fast-travel.

Defending against the spread of CC was just... don't go to those places. That's how you defended against its spread; ignore it. If it is getting close to your town, you built a moat to keep it out, a gap too big for it to cross. You only need to directly defend against it if a patch of it happened to enter your quarantine directly.

The Clentaminator and such were tools for attacking the infections, for eliminating them from a specific area. Not for defending an area from them.

At least, not until now.

I don't much like the idea of having free fast-travel impacted by the rapid spread of early hardmode infections. That sounds like adding a lot of busywork to a section of the game where we're already busy. At that point in the game, I should be exploring underground, looking for hardmode ores and surviving hardmode enemies, not doing upkeep on my fast-travel network.
Click to expand...

Exactly. One sentence would fix literally every concern (if the price jump is low, that is) but the devs actively refuse to tell us how high it will be, despite numerous requests to do so.

How will pylons and NPC happiness work in corrupted/crimsified biomes?

Really excited for this since most of my NPCs are in the hallow so I got a hallow pylon.....

*blink blink* Are those gray brick doors and platforms? Life just got that much better.
Really digging the gemstone trees... and the windows!

I hope that the happiness text isn’t so blunt on release. Bluntly saying that they like another npc is kind of awkward. I also hope that NPCs with biome-specific sales will like the relating biome (like with the merchant’s marshmallows in the tundra)

JusticeForTaxCollector said:
I hope that the happiness text isn’t so blunt on release. Bluntly saying that they like another npc is kind of awkward. I also hope that NPCs with biome-specific sales will like the relating biome (like with the merchant’s marshmallows in the tundra)
Click to expand...

at the very least I'd bet money on the witch doctor liking the jungle the best.

Pokenar said:
at the very least I'd bet money on the witch doctor liking the jungle the best.
Click to expand...

and the angler and pirate liking the ocean

Enix said:
Also the Wizard better go in the mushroom biome with the Truffle or else I'll riot

He'd love it there because he needs glowing mushrooms to make his mana potions
Click to expand...

The truffle doesn’t like the wizard. If I remember correctly, the only NPC he trusts is the dryad

JusticeForTaxCollector said:
The truffle doesn’t like the wizard. If I remember correctly, the only NPC he trusts is the dryad
Click to expand...

That's just a line of dialogue as a joke. Wizard would definitely love the mushroom biome.

Intriguing bit o' update... Now my buildings will mean something to the NPCs. To me this adds a bit to the way I tend to build across the world anyway. I like building in quite a few biomes, and having the town mechanic will help with my corruption and jungle expansions. The pylons would simply be icing on the cake.

For me the price thing never really bothered me, even in early game since it is my choice when I decide to go into hard mode; if I go into hard mode... I usually have one world that never touches hardmode, while the rest I use for resources and separate islands I would visit.

Looking like an interesting turn of events for the game, and will most likely play more if I can pry away from Dragon Quest Builders 2 long enough... Loving any game I can build in, so I am sure to put more time in eventually. Can't wait to see what all the update offers.

This new NPC and town content is by far the most exciting addition of 1.4!

It is wonderful that you can go out of your way to make them as happy as possible (for the one time reward of a pylon) or keep them happy for prices or just because. And if you just need to have them in a particular place...just 'cause...you can ignore it.

Wonderful addition, only sadness about this mechanic is that 1.4 is the end...so no elaboration on this new part of the game down the road.

Also, to all the people who are complaining that this punished people who aren’t good at building, that’s not the case. It’s been stated that making the house look good is optional. All it’s doing is rewarding people to take slightly more time to put a bit more effort into their homes. You can still build an ugly wood block if you want, as long as you spread them out a bit and make them a decent size, you get all the benefits of this new system. It’s rewarding you for putting a bit of time and thought into placing your tower or noob cube with certain npcs and a certain distance, rather then just building a giant tower. You don’t have to be good at building to get the benefits of this feature.
You must log in or register to reply here.
Share:
Facebook Twitter Reddit Pinterest Tumblr WhatsApp Email Share Link
Top Bottom