Official Get Wired For Terraria 1.3.1: Calling All Terrarian Mechanics!

These things have probably been suggested already, but what the hey.

* More wrench colors.
* Switches similar to the switches and pressure plates from Minecraft, where a toggle turns it on... and then back off after a second.
* Sensors that send a signal under certain conditions. For example, a "Night Sensor" that automatically turns on all my street lamps at night, or a "Danger Sensor" that closes all the actuator'd blockades around my house in the case of an invasion.

I think it would be cool to have like a wireless transmitter. This would be especially helpful for teleporters. Instead of having to place every single wire, you would just use a transmitter. I think it could be crafted in a way similar to how you use the crystal ball to craft the endless quiver or the endless musket pouch. I'm thinking you would need a few full stacks of wire to craft.

Thread's moving too fast to see if something like this was already mentioned (my apologies that's the case), but here's another idea; I just thought of this one, so it may be a little rough...

Junction Box
You place this item, and it is separated into horizontal and vertical pairs of inputs/outputs. This way, you can cross wires of the same color without them becoming part of the same circuit. The box handles the routing of the signal, so to speak.

This way you don't have to spend hours trying to figure out how to reroute your teleporter wires because they're crossing over another set of them. 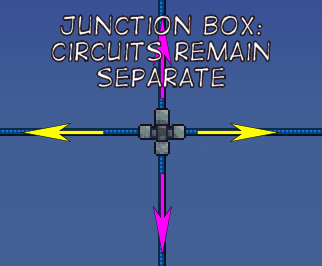 All I really want is:
- Some ideas are: bear trap, net trap, and hole covered by leaves trap that you fall into, but hardly noticeable when exploring.

I can see some intense PVP matches with the last three suggestions.​
If wireless teleporters might seem too difficult to balance, perhaps add something like power lines that would connect with each other and send pulses over long distances!!

I think that's it, I have thought about a wiring update for awhile so I could be forgetting something.
L

I'm not really much of a mechanic, but I do have a simple idea. Why not give the mechanic an item you equip as an accessory, that consumes coins to place wire. The same amount of coin that wire costs from a mechanic. I always have the problem of buying a bunch of wire and barely using any of it, or running out of wire several times during a project. That would make it so much easier to wire. And breaking wire with that accessory equipped automatically puts the money back in your money slots. (instead of dropping wire or money on the ground). Maybe you can even have the ability to combine that accessory with wrenches so you get that ability without putting it on an accessory slot, just by having the special wrench. With this accessory I would never run out of wire a bunch of times during a project, and I wouldn't buy way too much wire and lose it in a random chest somewhere, it would make it a lot more enjoyable to do stuff with wires.

And as for what a lot of other people have been saying about wireless transmitters, I think they would be cool. But I don't understand the argument for the need. Most people are saying wiring to the sides of the map sucks and not worth the effort. I wired to both oceans in 1.3 in a large world easily, i don't see the issue. With smart cursor and a crap ton of wire, it only took a minute or 2 to wire to the other side of the map, very easy.

-A new armor set for mechanics that increases the placement range of wrenches, wire cutters, etc. that has to do with mechanic stuff, the full set will allow you to see where wires are even if you aren't holding a wire tool
-The ability to craft wires

A few more ideas for Wire.

I also wish that the jungle mimic was implemented along with some other stuff that wasn't implemented like fishing pole modifiers and modifiers made for summoner weapons instead of using magic modifiers.

It would cool to see more active statues and more traps in general. I feel like right now the traps available are very limited and lose their usefulness rather quickly. Maybe have the ability to hammer traps to make them face different directions. In particular this could be helpful for dart traps, which as of now can only shoot horizontally.
[DOUBLEPOST=1439608214,1439607876][/DOUBLEPOST]Conveyor belts would be really nice for farming.

An accessory called mechanic speed dial,which lets you hit a button and it pops up the mechanic's shop, if you have the mechanic. However, this convenience come at the cost of 10% increased price.

In response to what many others in this thread have said, Would it be possible to just open the mini map and Draw a Red / Yellow / Green / Blue line from point A to point B and click done? like drawing with MS Paint this would save a lot time heh

RAINBOW WRENCH? HELL YEAH!
Terraria has all sorts of rainbow stuff and it just so happens that you are requesting stuff. So...

RAINBOW WRENCH!
Sold by mechanic like all other wrenches... (Only when party girl is active though)
It places RAINBOW WIRES! HELL YEAH!

Auto-Swinger- Place it down, right click to put your sword in, hook it up to a switch (although 1 sec-5 sec timer would be better) and it swings your sword every time you click the switch or every 1-5 seconds. If it's a ranged sword like the Terra Blade or Ice Blade it will aim at enemies. (Hardmode) (Found right outside of Temple RARELY) You can take your sword back out of it and put it back in as many times as you want.

Auto-Shooter- Exactly the same as above except you put a gun in and it shoots stuff for you. (Basically a turret)

MagneticLord said:
An accessory called mechanic speed dial,which lets you hit a button and it pops up the mechanic's shop, if you have the mechanic. However, this convenience come at the cost of 10% increased price.
Click to expand...

why stop there? make it the shoppers speed dial. can call up any npc to buy things from, assuming you have them in the world, and are willing to hand over extra dough. though you'd still have to talk to folks for anything not shopping related.
S

A few ideas that may or may not have been suggested already:

Rukrio said:
why stop there? make it the shoppers speed dial. can call up any npc to buy things from, assuming you have them in the world, and are willing to hand over extra dough. though you'd still have to talk to folks for anything not shopping related.
Click to expand...

And then it combines with cell phone, making something even better called smartphone or something

MagneticLord said:
And then it combines with cell phone, making something even better called smartphone or something
Click to expand...

well, it could also have funtionality for multiple spawnpoints (including the world's spawn) and on team warping... so maybe it merges with a wormhole potion and some luminite? (balance.)

I'm never much with complicated wirings, so wireless transmitter. But I get it'll be too easy.

or even better, a box that spawns the mob according to the banner placed in it (when triggered too of course)

You should add light bulbs to Terraria for like. Ceiling lamps and stuff. And you can wire it to a switch or something on the wall. Lightbulb would be made with like, 2 glass a torch and some wire?

Also doorbells. Why do I say doorbells? So you can annoy the crap out of your friends.

Oooo! An idea, what if instead of having to wire a teleporter manually all over the map you could place a hook on one end of the teleporter, travel to the other teleporter and place it down (like a ball of string I guess), so there is a wire that goes across the map without you having to slowly walk all the way with a wrench placing wires.

squidspeaker said:
You should add light bulbs to Terraria for like. Ceiling lamps and stuff. And you can wire it to a switch or something on the wall. Lightbulb would be made with like, 2 glass a torch and some wire?

Also doorbells. Why do I say doorbells? So you can annoy the crap out of your friends.