If you're making armor for the Mechs that aren't Spider or Frost, you probably just felt a bit of dread down your spine reading that. The Hardmode Ores of Yore have been long replaced with their fancier and newer siblings: Palladium with its hearty health regen, Orichalcum with its piercing projectiles, and Titanium with its shredding shards. Sure, the older ores have higher STATS than their younger counterparts, but their utility leaves a bit to be desired. Let's fix that.

To start off, let's look at what each armor does, and see what we can glean.

In their current state, the Original Ores (which is what I'll call Cobalt, Mythril, and Adamantite collectively from here on out) have a simple set bonus depending on which headpiece you equip:
It wouldn't be fair to fans of these sets to take them away just to give them potentially gimmicky set bonuses, so instead, we'll give the New Ores (Palladium, Orichalcum, and Titanium) nerfed versions of these to make up for it.

"But aren't you complaining about the New Ores being better and more interesting than the Original Ores? Why are you buffing them?" Calm down, that's what the next sections are for.

Let's begin with Cobalt and Palladium.

Palladium grants the user increased health regen with a buff, so the first tier could be centered around Health. My suggestion:

Yeah, yeah, it's still a stat increase, but it's a unique one. This would raise your Maxiumum Health to 500 BEFORE Mech Bosses and 600 AFTER a Mech Boss with all Life Fruit. With Lifeforce Potions, you can push it even further up to an incredible 720 Max Health.

However, the tradeoff is that you have lower defense than any other HM Ore, barring Palladium, meaning even though you have higher health on paper, you may not be able to tank as much hits. You also play a bit slower, as you won't have Palladium's extra regeneration to get back into the fight faster. However, you don't have to take those regen breaks as often due to your increased health pool.

Up next is Mythril and Orichalcum.

Orichalcum grants the user on hit a projectile that streaks across the screen, piercing through any enemy for extra DPS. Offensive damage seems to be the subject of the second tier.

Mythril is the hardest one to come up with an idea for, since I don't want to tread on other Armors unrelated to the Hardmode Ores, such as Frost (the original idea I had was letting Mythril grant random debuffs to enemies) or Forbidden. My suggestion:


Mythril gives all weapons a cone of sustained damage pointed towards the cursor while using your weapon. 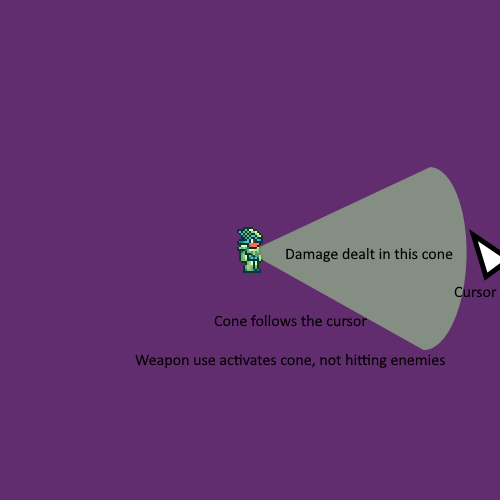 While Orichalcum fires out projectiles that can theoretically hit anywhere on the screen but is somewhat RNG-based and requires you to hit something, Mythril gives a cone of damage that supplies steady damage to anything close by in your cursor's direction, even if you aren't hitting anything. Mythril will deal less damage than an Orichalcum projectile in exchange for its ease of use.

Orichalcum lets you stay back and deal damage with higher single target damage and piercing, while Mythril lets you get up close for area damage and crowd control.

The final pair is Adamantite and Titanium.

Titanium grants the user an increasing number of titanium shards orbiting the player that generate on hit and deal damage on contact, acting as a defensive tool. Ergo, the third tier is focused on Defense.

Adamantite is meant to be impenetrable, so my suggestion is:

Adamantite applies the Adamant buff on hit that reflects projectiles for 50% damage and deals a shockwave of knockback on receiving damage. 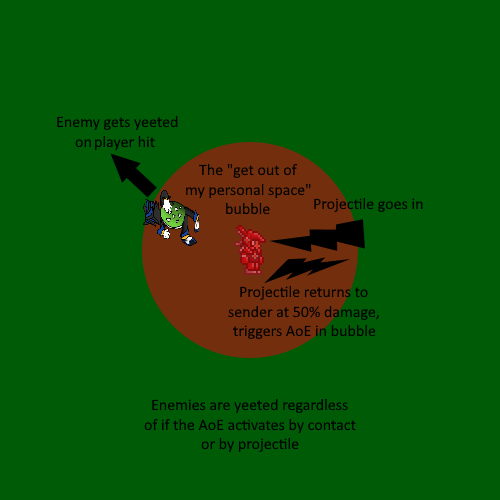 This one requires a little explaining. If after dealing damage and receiving the Adamant buff you are hit by an enemy with its own hitbox, it will release an AoE attack that does about 50 damage and inflicts high knockback on enemies, beaten only by the Slap Hand. If you are hit by a projectile, you take 50% of the damage, and reflect the projectile back at it for the remaining 50%, and the AoE knockback activates.

Say an Armored Skeleton runs into you after you hit an enemy and gain Adamant. When you get hit, your armor sends it flying back. You then manage to snipe it out of the air and reapply Adamant just as a Skeleton Archer fires an arrow at you, in which you take half damage, making a Crawdad behind you go flying back, and the arrow that hit you shoots back at the Skeleton Archer dealing the rest of the damage you would have taken.

Where Titanium lets you take out enemies that get close to you by shredding them, Adamantite gives you a "get off me" tool to let you breathe from hordes, as well as punishing enemies that spam projectiles with a taste of their own medicine. Daytime Empress is still going to obliterate you and leave, so don't expect a free win.