I haven't seen anybody else post about this, so here goes.
By far the most frustrating of the achievements at the moment is the Angler quest achievements - especially the one that requires 200 quests. Let's do some number crunching...
If you only have one character and one world without the Enchanted Sundial, you would need 200 full in-game days with one quest a day - which is 24*200 = 4800 minutes. That's 80 hours in real time. Nobody got time for that.

Luckily, Terraria allows you to have multiple characters enter the same world. Therefore the same Angler with the same daily quest. And each of those characters can turn in the quest independently.
And luckily, there's a little quirk to fishing up quest items that allows you to fish them indefinitely: if you put the quest item in a chest and continue fishing, you can find the quest fish again.

So - here's the basic how-to of cheesing the Angler's fishing quests for about 30-40 quests a day: 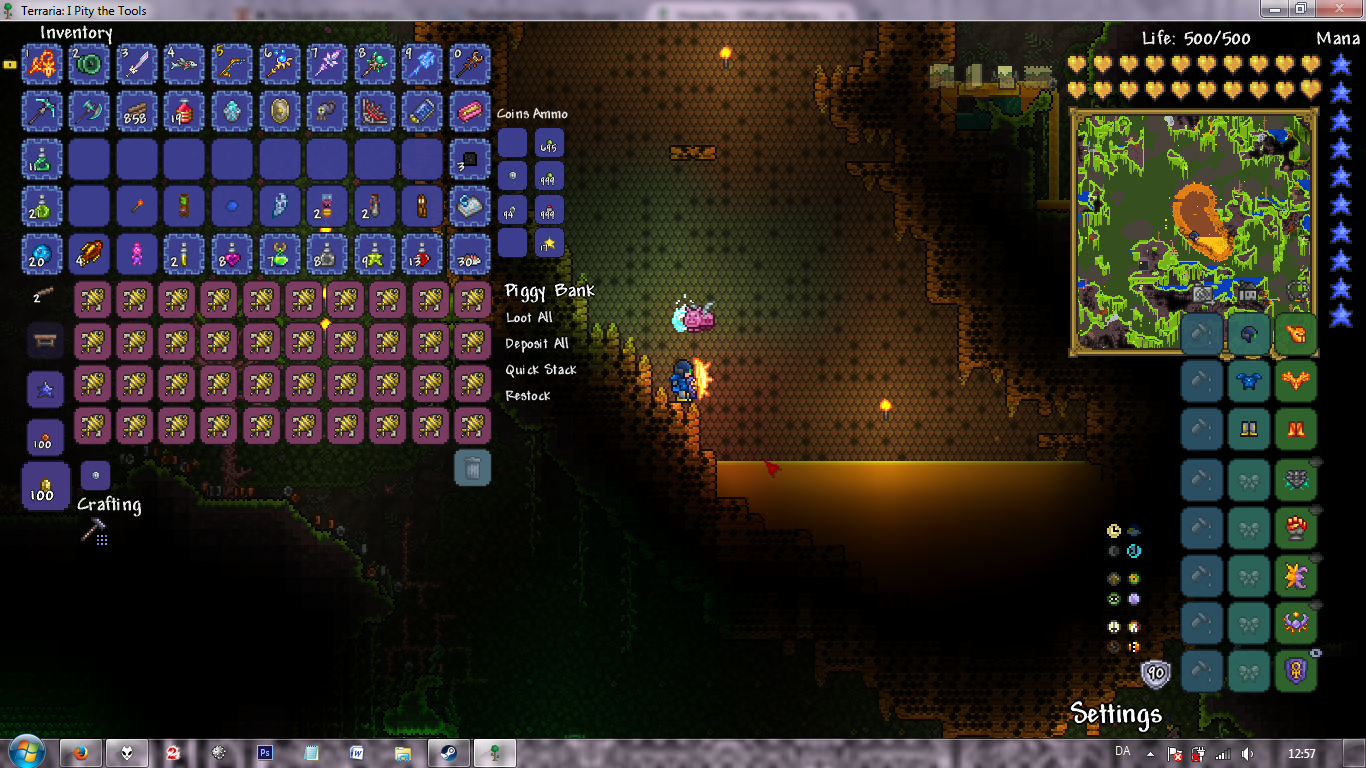 Preparation:
01 - Make sure you have plenty of Sonar Potions and preferably also Fishing Potions, as well as a good fishing rod (The Golden Fishing Rod is preferred, but in case you want to try this without having done any fishing prior, there are some other rods that are close in fishing power that can be bought from NPC's - check the wiki). I also recommend having the High Test Fishing Line for the 1/7 increase in efficiency.
02 - Make 39 new characters (I suggest naming them 01, 02, 03, 04, 05, 06, 07, 08, 09, 10, 11, etc. to keep track)
-- 02.1 - Make sure all of these 39 characters have their spawn point set as close to a chest and the Angler as possible - any extra distance will lower the daily rate of finished quests pretty significantly since you need to add the extra distance*39 to the time.
03 - Make sure you know where to go fishing (with properly sized pools) for all the different quests, and that you have quick ways of getting there. Speed is pretty important.
04 - Have an extra Piggy Bank with you. A Money Trough is a possibility too, but for convenience I recommend placing an actual Piggy Bank since the Money Trough will despawn several times during a day of fishing.

The actual fishing:
05 - Check the Angler right when the time hits 4:30 in the morning, and immediately go to a properly sized pool of water in the designated area.
06 - Place piggy bank, summon whatever minion you want for protection, drink potions - and start fishing.
-- 06.1 - Keep the Piggy Bank open so you can immediately shift click the quest fish into it whenever you catch one. Also always keep the Sonar Potion buff up - this is just generally incredibly convenient and prevents you from getting a loaded inventory. You only want the quest item preferably.
07 - And then just keep fishing until the time is about 6-7 pm. Keep track of the time - either manually or you can have the Moon Charm accessory to give you the visual cue of turning into a werewolf when it becomes 7:30. At this point you should have been able to fill the entire Piggy Bank (40 items total) with quest items. If you fill the Piggy Bank before this time, that's just bonus time for the next step.
08 - Go back immediately (Magic Mirror or similar) and fill your inventory again with the quest items and transfer them over to an empty chest near the Angler. The quest items act a little weird though, as you cannot loot all the items simultaneously. You basically need to drag and drop them individually from the Piggy Bank to your inventory. For depositing them in the chest, you can luckily just deposit one and from then on just auto-stack to nearby chest when you don't have the chest open.
09 - First take one fish and complete the quest with the character you used to gather the quest items. Then exit the game quickly.
10 - Open up character 01 in the same world, get a quest item from the chest and turn it in and immediately exit (you don't have time to look at the rewards and put them in chests and stuff - as soon as you've clicked Quest on the Angler's screen you need to exit the game)
11 - Repeat step 10 until you have gone through all the 39 characters you prepared for this.


Notes:
-If for some reason you get to 6 or 7 pm without a full Piggy Bank, you need to get back immediately anyway - you don't want to not have enough time during the night to turn in all the quest items you've fished up.
-It happens though, so you should estimate it to take about 6 in-game days instead of 5.
-Another thing that I happened upon while doing this - my game (as well as Steam entirely) seemed to crash pretty consistently after exiting and entering my world about 7 or 8 times. I don't know if this is something everyone is going to run into, but if you do it's not a big problem, just a hassle to have to reopen Steam and the game. I suggest making little rhymes or sentences for each time you load a new character to turn in the quest - in case the game crashes it's much easier to remember which one you got to that way.


I hope you can find this useful. I don't really know what the hell they thought when they made an achievement for doing 200 quests, it's by far the most grindy of them all. Weird. Anyway, happy super-fishing. It's really satisfying getting three or four quest items in a row

Heh, already knew about this :3 I just didn't say anything caused I liked my secret too much xD

GigglingTeddy said:
Heh, already knew about this :3 I just didn't say anything caused I liked my secret too much xD
Click to expand...

Yeah, it wouldn't surprise me if a lot of people already know this - but I thought I'd write out my method either way. I'm sure there are people out there who don't know about it!

Strider said:
Yeah, it wouldn't surprise me if a lot of people already know this - but I thought I'd write out my method either way. I'm sure there are people out there who don't know about it!
Click to expand...

Hope it helps people then So that your efforts won't be in vain.

You sir are amazing, great instructions too!

"Fish in the floating islands with your cruddy pet, minion!"

I used this method after getting frustrated with not getting hold of either the Weather Radio, Sextant, or Fisherman's Pocket Guide. It's pretty effective for getting hold of the rarer items and for just making money.

You don't have to use only 40 characters (39 + original one), if you're lucky enough you can get 81 rewards in one Terraria day - 40 fish in Piggy Bank/Money Trough, 40 in Safe and 1 in inventory for main character.

But remember, that it doesn't take the same amount of time as normal Terraria day - you have to also count the loading and saving screen time and because of that you should use small world.

It's pretty tight, time-wise, to get the full 40. To get 80 would require insane luck.

Yeah, BUT it's still possible so it's better to be ready for more fish than lose time, which you could use to get more fish

I'm not sure if this is use to anyone now...but if you turn on auto-pause while turning in the quests, it legit takes 2 seconds (2 in-game minutes) for each character, so you could take the rest of the day off, stay and fish longer if you don't have 40, or maybe even get more fish and make more characters to get the achievement even sooner! The picture attached is my setup, my 39 other characters spawn in at the bed, pick up a quest from the chest (stopping the timer) then talk to the Angler (which doesn't even start the time because you can just click the Angler to talk to him) and then close the convo with the Angler and put the items I get in the chest, and because I spend little to no time outside of auto-pause, I take about an hour and a half in-game to turn in 40 of them hope this helps you guys a bit!

Has this been patched? Because when I exit a world and go back into it it changes the quest.
S

Are you sure you logged into the same world? You might have 2 worlds called the exact same name. If so then choose which one to delete. Or go into the files and change the name. I hope this helps you.
Don't worry, it happens to the best of us

Is your game modded at all?