When this was first spoiled, I was beyond excited! I had made rather large builds for years, and if I wanted to post them, it could mean an hour of stitching together dozens of images. I have to be brutally honest, however, and say that the final product was a bit of a let down. Aside from the bugs (tiles not showing up occasionally, paints being ignored, and light sources being ignored if you don't want to use image packing), the thing that bothers me the most, and the sole reason I simply will not use camera mode in its current state is backgrounds.

With the way camera mode currently works, you have nine tiny water squares to click on to choose which biome you want in your background. While this can be a really fun tool to see what your build looks like with various backgrounds, it can also be extremely annoying, if you happen to forget, or can't tell which background each water block means. At the moment, there are still people who have no idea what those water blocks are. A mouse-over tooltip would easily fix both of those issues. I also suggest adding a tenth (and default) block that sets the background as the one your character is standing in when capturing the image.

Finally, on the point of backgrounds, when taking a screenshot of anything large, the perspective of the background seems to be at the very bottom of the selection frame (as if to assume you're viewing the entire build with your character standing at the very bottom). What this means is the final product of the screen capture will have a drastically lower background image than it does in game. Here's an example: 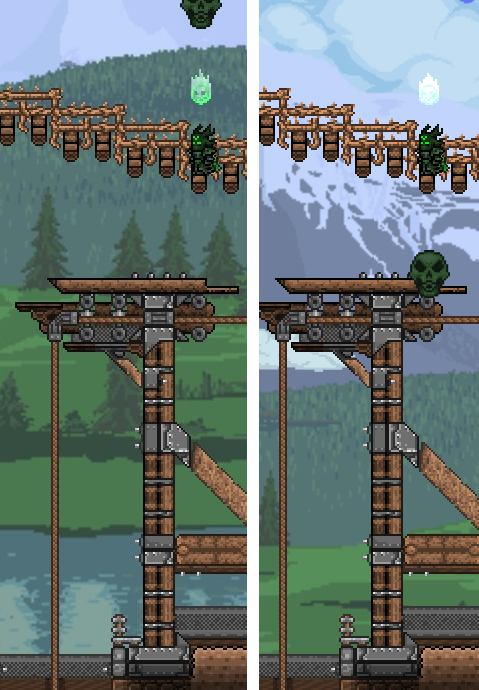 The image on the left was taken as a standard screenshot. The image on the right was taken via the camera tool. Note how much lower the background becomes. While it might not seem like a huge deal on a build like this one, on some builds, the background be so low, that it just looks like it's been turned off completely. Personally, I love the work put into the beautiful backgrounds, and I like the way my builds look in front of them.

What I recommend for this is similar to my biome selection one. Have the angle and perspective of the background be decided on the character's current elevation, and not the rock bottom of the frame. This would allow for the build to pick a desirable size background to be viewed. If that's not possible, I'd even be able to live with the perspective being placed at the top of the frame, rather than the bottom, and backgrounds are more apparent the higher you travel.

On the whole, camera mode is very close to being the best tool in a Terraria poster's arsenal. A few bug fixes and quality of life changes, and I can tell you I will never go back to stitching images again!

This is what the camera tool is missing! I love it!