I just finished my master mode journey's end playthrough and I noticed a lot of the new/overhauled weapons on this list have ? so I figured I could share some of my experiences. I focused mostly on summoner in hardmode.

The Firecracker is decent I got it at the start of hardmode and I used it until I got the buffed amarok... why did they buff the amarok... I also got the poison staff and I can pretty much say the same thing about it it was good for a weapon i got in very early hardmode but I dropped it once I got some of the truly broken weapons. Probably C or B tier.

The spider staff got a lot of changes, the spiders attack slower, but they use local immunity which means more spiders will always deliver more damage, and it means they won't conflict with your piercing weapons. Whether this is a buff or nerf really depends on what your build is. If you were a ranger that used non piercing attack and 2 free spiders this is a nerf, if you used piercing weapons this is a buff and if you were a summoner in spider armor this is slight buff since the damage output is about the same but you have more weapon options. Also spiders now use a full minion slot.
Last edited: May 21, 2020

The durandel was a decent weapon no where near as good as an amarok, especially since I had acess to ichor flask which effectively made the amarok have '10 summon tag damage' Not really sure if I would put it in A even I think B is fair for my experience with it. It grants a buff to melee speed when you hit stuff so it could potentially go well with melee weapons.

Hallowed repeater got a big buff it needs to go up to A at least. When used with jester's arrows it pretty much completely outclasses the stake launcher and it seems that fallen stars are a lot more common now so jester's arrows are very cheap.

Just wanted to gush about the rainbow rod for a bit and this seemed like the best place to do it; being able to pierce twice gives it really good crowd control capability while still being good against bosses and single enemies as it will just home back to the enemy. You also really don't have to aim at all as the homing is really strong, but of course with how fast it is now and how it follows the cursor it's still really easy to hit things with it. Plus, when you hold down left click and aim it at a wall it doesn't break the projectile, so you can easily get through small gaps walls like underground, so it's even good close quarters. It can even deal with ADDs such as destroyer probes or the queen slime slimes while still doing damage to the boss. I plan on using it against plantera and possibly even golem, though I did just reforge it to mythical which might be allowing it to stay relevant.

Plus it looks really cool and that's honestly the most important part of any weapon by far.

Morning star is kind of weak even when using spooky armor a papyrus scarab and necrotic scroll it was basicly a mediocore alternative to the death sickle and paladin's hammer. Espeically if you want to use it for crowd control since whips lose damage for every additional target they hit. And being a summon weapon it misses out on the ichor flask which makes the summon tag damage hard to argue for. If you don't have a lot of summon damage then I don't see why you would even consider this weapon.

I can say roughly the same thing about dark harvest when doing a heavy offense summoner build its single target dps is competitive with the palladin's hammer but as soon as you try to crowd control then it gets crushed by the hammer.

Eventide can be considered somewhat of a side grade to the tsunami it trades a bit of raw dps for an extra piercing arrow. It's a bit too situational to put it on the same level as the tsunami maybe S-?

Starlight is good, it has a lot of dps and it pierces its's range is fairly limited but not atrocious like the fetid banghads or phycho knife. Could argue it's an upgrade to the paladin's hammer with slighlty less reach.

Pretty much everything I said about the morning star and dark harvest can be said about the kaleidoscope, but compare it to the starlight. It has a pretty sizeable damage boost to summons but from my testing it wasn't enough to get any substantial advantage over the starlight. Not to mention a lot of the summons at this point will rush of screen and murder everything before you can even get in whip range...

Terraprisma... S+ This is basically everything you love about the xeno staff and stardust dragon in one package, it has high dps and goes though tile like the dragon and is arguably even better at keeping up in fast fights than the xeno staff. You have to kill what is arguably the 2nd hardest boss in the game without getting hit so it's availability may be low but it's also a guaranteed drop if you do so. This weapon is so good I didn't even bother with the stardust dragon.

This hasto be updated.

Lord Ecramox the Almighty said:
This hasto be updated.
Click to expand...

Give it time, there's a lot of things that have been added/changed and a whole new difficulty to compare against, it's only been a week.

Baconfry said:
You won't find a better source of tag damage until after the Empress of Light,
Click to expand...

What about the flask of ichor that effectively adds 10 tag damage to every melee weapon?

What about the flask of ichor that effectively adds 10 tag damage to every melee weapon?
Click to expand...

Funny, that. I'm actually using a melee/summoner hybrid set (Chlorophyte/Spooky/Squire) that combines Flask of Ichor/Vampire Knives with the Durendal's tag damage, and it works incredibly well. You can basically stack summoner tag damage with melee tag damage. Works like a charm.

Baconfry said:
Funny, that. I'm actually using a melee/summoner hybrid set (Chlorophyte/Spooky/Squire) that combines Flask of Ichor/Vampire Knives with the Durendal's tag damage, and it works incredibly well. You can basically stack summoner tag damage with melee tag damage. Works like a charm.
Click to expand...

I just posted about this, but it's interesting to know that Dark Harvest makes nearby enemies take 10 damage per minion attack, and doesn't increase single target DPS at all. It's great for events, though.

mathbrush said:
I just posted about this, but it's interesting to know that Dark Harvest makes nearby enemies take 10 damage per minion attack, and doesn't increase single target DPS at all. It's great for events, though.
Click to expand...

I know you’re kinda overwhelmed by all the buffs, nerfs and new weapons in the update, but you forgot to include the Super Star Shooter, that can be purchased from the Travelling Merchant after defeating a mechanical boss for 35 gold. I think it’s pretty strong, although the hard-to-get ammo makes it prohibitively expensive for anything other than bossing.

Bvdrst said:
I know you’re kinda overwhelmed by all the buffs, nerfs and new weapons in the update, but you forgot to include the Super Star Shooter, that can be purchased from the Travelling Merchant after defeating a mechanical boss for 35 gold. I think it’s pretty strong, although the hard-to-get ammo makes it prohibitively expensive for anything other than bossing.
Click to expand...

How well does it match up against Plantera and Solar Eclipse? I reckon it probably rips eclipse monsters to shreds, but you're right that ammo will be an issue. Most people probably know about the ammo issues, so I'll probably rank it based on performance alone. (working on the first 1/3 of the guide right now)

Another thing the Arkhalis is now a hardmode weapon, it has been moved to the Arkhalis dev set and the rare enchanted sword variant has been replaced by the terragrim.
M

Once your done with all the changes, it would be interesting to see rockets ranked now that there's cluster rockets, mini nukes, and lava rockets.

From my experience I'm a bit confused why the kaelidiscope is higher tier than the starlight, yes the boosts to minions is very significant but so is starlight's damage output. When using the Xeno staff with spooky armor a papyrus scarab and necrotic scroll the best performance I got of of the kaelidoscope + Xeno staff was roughly the same dps against a single target as the starlight + Xeno staff. The starlight performed noticeable better than the kaelidosocpe in every other situation I used it in.

Kaleidoscope has better range/area of effect, and only needs to perform one smack every four seconds, between which you can swap to something else like Vampire Knives.

Starlight just hasn't been all that useful because all the weapons in this tier easily melt normal enemies anyways, and it has terrible bossing performance. For example, let's say you're doing the Frost Moon. Kaleidoscope can smack the Ice Queen once as she passes by and boost Xeno Staff DPS to insane levels for the next few seconds, whereas Starlight accomplishes literally nothing in the same situation.

on the other hand, Starlight can do this... 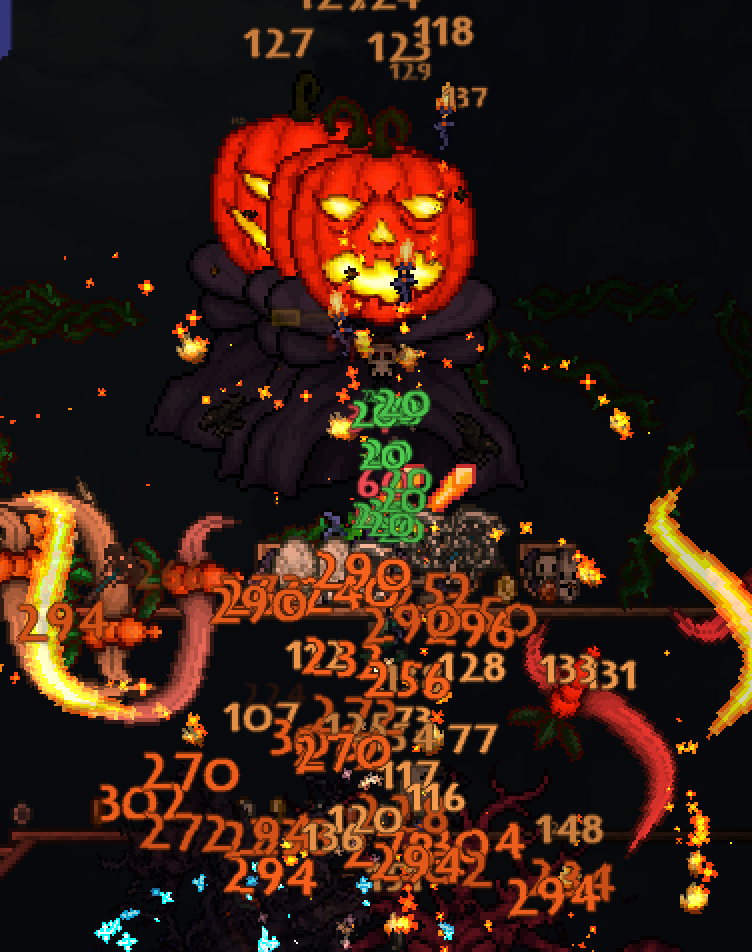