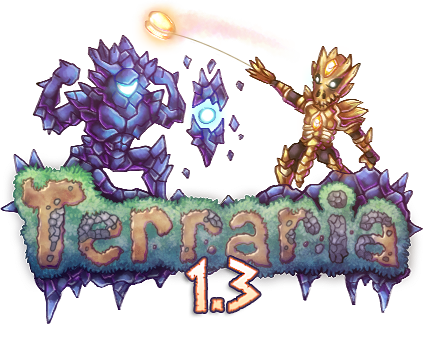 It has been a long road - one full of sleepless nights and tiring days, laughter and tears, successes and setbacks - but the time has finally come for us to turn our labor of love for the past year or so over to you, our loyal fans. Terraria 1.3 touches on many aspects of the game - from re-imagined sprites and backgrounds to new features and - of course - the new content that you crave - that we truly feel it refreshes and revitalizes the entire Terraria experience. We are confident that you will enjoy what it has to offer!

Perhaps most exciting to the team are the ways in which Terraria 1.3 streamlines the multiplayer experience. Gone are the days of port-forwarding and endless IP sharing for anyone seeking to connect quickly with their friends for an ore-hunting session or to team of up that tough boss fight. We have always felt Terraria was best with a buddy (or ten) - so if you haven't yet, now is an opportune time to try out multiplayer! (Do note that dedicated servers will still need to use the standalone server software, which you can download HERE).

Well, enough "memory lane" from us - on to what you came for: the specifics of the launch!

SPECIAL TERRARIA 1.3 LAUNCH DISCOUNT
We will be running a two day launch promotion with Steam and GOG in honor of the launch - Terraria will be 25% off ($7.50) today and tomorrow - starting when 1.3 launches at 1pm Eastern! If you are looking to get a new Terrarian with whom you can play multiplayer - this would be a good time to leverage those savings.

Click the logo above to head to our Steam Page to purchase!

TERRARIA 1.3 CHANGELOG*
*Please note that Re-Logic makes no promises as to the completeness of this changelog. It's a game about exploration - go explore!

Please click the text above for a link to our Official Terraria 1.3 Changelog.

FEEDBACK, DISCUSSION, AND BUG REPORTING
Want to share your feedback about the 1.3 Update: OFFICIAL FEEDBACK THREAD

Have a Terraria 1.3 Bug to Report (please give as much information as possible): TERRARIA PC BUG REPORT SECTION

​
So, what now? Now you go play what we have worked so tirelessly on all these many months while we sit back and await your feedback. Who knows, we may spend some time hanging around in streams or just chatting with you guys.

What's next? Well, besides any needed hotfixes, we take a deep relaxing breath before we launch headlong into our next projects - for Terraria, Terraria: Otherworld, and beyond!

Thanks - as always - for your passionate support for our game, our team, and our vision as a game developer. This community is truly special, and we cannot wait to continue bringing you amazing gaming experiences in the months and years to come!

Wow! This is amazing! Thanks, Loki!

EDIT: Omg, first, I would like to thank everyon-

WE SHALL ENJOY!
I want to thank the staff for making such an awsome game. Keep up the great work, everyone at Re-Logic!

Holy bajeezus, it's a thread we can reply to!

The hype has been boiling in my stomach for months, and it's all gonna be released today... when... when I catch a few winks after a whole ton of air travel... no matter how tired I am, it's gonna be a sleepless night. Gosh darn it, I can't. i gotta stay uppppp

I will be one of the MANY streamers! my link is in my sig!

We're gonna start 30 mins before and update there on the stream!

I can't wait another 44 minutes!

Awww yeah! I need this! BBL when the update goes live, I'm gonna be busy with 1.3! Thanks Re-logic for all the time and effort spent on this update, as well as all of Terraria!

I've got one question, though..

MY RAINBOW CONDITION HAS HIT A CLIMAXE! I can't even describe how excited I am! Thank you Red, Cenx, and everyone else on the team for this awesome game and update!

Well, it looks like the time has finally arrived. The day and exact hour the majority of us have all been looking for. This isn't the end, folks, this is only the beginning of a franchise, so to speak, that will blossom. 1.3 is here, at last, after all the waiting, and we can damn well say it was worth the wait. The future of Terraria is only going to get better and better. We have Terraria: Otherworld to look forward to, and further news concerning the game, as well as Terraria 2 which will excite us for the years to come.

Here, I'm not going to talk specifically about the wonderful update the developer team and testers have helped produce, I'm going to say a huge "Thank You" to everyone that's helped bring this update together. Thank you, of course, to the current developer team as a whole, as much as you've changed throughout the years and updates with departures and arrivals from developers old and new. Thank you especially, to Cenx and Red. I remember Blue and Red first releasing the game in 2011, when the game was bare with content compared to what we see here. I remember all the individual moments from there up till now. The alchemy update, introducing the potions and such, the 1.1 update, bringing in a bunch of new mechanics and a lot of new and exciting content. The 1.2 update, where things only got better. And of course, every update in between fixing bugs and adding smaller things to the game. We won't forget the April Fool's Duke Fishron, will we?

Well, Red has pretty much sticked to Terraria from start to finish as a loyal developer. Some of you may know that he originally stopped Terraria after 1.1 because he had, if I remember correctly, a baby to care for. But no, he continued the game and saw what the community wanted. And there, we met Cenx. Cenx has been a supportive developer and has taken our community suggestions into consideration. To add, she's been very helpful and been covering for the absence of Redigit as he has other plans for projects of his.

All the moderators and other staff members, have also been amazing throughout TO and TCF. Loki as a Community Manager was a great decision, considering he puts a lot of work into helping with the forums and making sure everything is OK to some degree, whilst also supervising the update a good bit and giving a helping hand. Everyone who has contributed to the new TCF forums deserve a pat on the back, as much as the developers do. TCF would be hell if we didn't have moderators to keep people in line within the rules and guidelines, and give out warnings and bans when needed.

Overall, as much as I loved the past and miss it so much, I am looking forward to the future. I believe, as a fan of this game, that Terraria can only get better from here on out.

So thank you, again. Thank you to the awesome community, and enjoy the 1.3 update!

I am so pumped for this. (Going to insta-fail my course in approximately 40 minutes, but whatever!)
Thank you so much Relogic for bestowing this gift upon us.

Yes, it's so close. Best birthday ever! Not only do I get to play this amazing game but everyone gets to as well! So many people are happy C:

It's gonna be better than drinkin'. waiting for it! time to go no life mode!

Well... It's finally here... less then an hour left before launch. I can't wait to finally see this for myself, thank you Re-logic for making this!

His reaction to the need for port-forwarding was " THANK GOD!"