JoJoStands is a mod where I'm trying to implement many stands and items from 1-7. 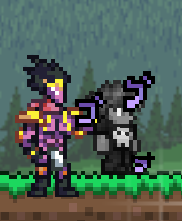 How to obtain Stands:

If you have a stand idea or feel like contributing to the mod, you can join the JoJoStands server on Discord: Join the JoJo Stands Discord Server!. Or you could look at the JoJoStands Wiki if you need to find something.This is my first experience with code, if you want to help out, just know we aren't professionals at this.

​
JoJoStands v2 Update Changelog (Alternatively known as "Rework Update")
+ New mod icon
+ Recreated stands so that instead of being items, they're now models that punch for you (Most of the controllable stands belong in the Stand Slot, can't use items during control)
+ Stands in the stand slot are summoned with the keybind "Stand Out"
+ Auto Mode. Stands in the Stand Slot can be minions when you press this bind (items can be used)
+ Magicians Red as a Stand!
+ Aerosmith as as a Stand! With radar passive!
+ Sex Pistols as a Stand! (Now separate from the revolver)
+ Added Rusty Revolver, Purple Revolver, and Modified Revolver
+ Epitaph Ability for King Crimson
+ 20m Emerald Splash ability for Hierophant Green and also added a 4th tier
+ Zipper to 30 tiles away ability for Sticky Fingers
+ Gave The World a Road Roller ability
+ Added Timestop Effects like a negative effect and a greyscale effect
+ Gave Century Boy another tier and added equip visuals
+ Crafting station for stands, The Remix Table
+ Special crafting materials, Wills (Will to Fight, Will to Protect, Will to Escape, Will to Destroy, Will to Change, life forces)
+ Stray Cat and Mature Stray Cat enemies
+ Stray Cat Item
+ Viral Miner enemy
+ Recreated Yoshihiro AI
+ Gave D'Arby Bet. You can play against D'Arby in 3 minigames for coins
+ More ways to obtain stands:
+ Kakyoin vanities
+ Doppio vanities + diavolo hair
+ Slow Dancer mount added
+ Made TA4 require spin energy, which you get by riding on Slow Dancer and running at max speed
+ Multiplayer Effects! (We'll leave this for you to find out)
Already comes with multiplayer compatibility!

YouTube link to VM theme:
I'll also take this edit to say that the next update is almost done. "Stand Class Update" is to make stands more viable throughout the game with accessories and armors to help you buff your stand before we jump into updates by parts. (There'll also be some new stands!)
Last edited: Jul 10, 2020

It'll be items from parts 1-7 (eventually 8), but there may be few spoilers for anime-onlys.

AnotherGuy said:
It'll be items from parts 1-7 (eventually 8), but there may be few spoilers for anime-onlys.
Click to expand...

Having some pictures or gif's would be nice, looks like a pretty cool mod though.

NuovaPrime said:
Having some pictures or gif's would be nice, looks like a pretty cool mod though.
Click to expand...

I'll try to get some in right now

I love the mod and Star Platinum is RIDICULOUSLY overpowered but they despawn after a while. Please make it so they dont naturally despawn

Have you thought on upgrading the sprites and attack animations?

AlainZv said:
Have you thought on upgrading the sprites and attack animations?
Click to expand...

So When do you think this will be released?

adooglewop said:
So When do you think this will be released?
Click to expand...

What's on top is already in the mod browser, but if you mean the next couple of stands, we're working on them

What you have right now is pretty bare bones.

It could be done way better.

Is there currently any way to get the Stone Mask or has it not been implemented yet?

Question: How do you get a Requiem Arrow? I'm trying to get Tusk Act 4 but can't seem to find any.

raskev said:
Question: How do you get a Requiem Arrow? I'm trying to get Tusk Act 4 but can't seem to find any.
Click to expand...

It's a moon Lord drop
Y

bruh, its a joj mod, there is gonna be stuff you may not wanna see before you see it in the anime.
H

Look i dont know if it is me but i dont get an arrow when i create a new chracter ._.

HumanMan said:
Look i dont know if it is me but i dont get an arrow when i create a new chracter ._.
Click to expand...

You now get a 'Wrapped Picture' when you spawn, which spawns Yoshihiro. After you kill him, you get the arrow
I

How do i upgrade my stands?
O

So I've been playing for 6 hours now and I haven't seen a single yoshihiro. Also I've been killing birds a lot and haven't got a paper. Is this not working or am I unlucky
You must log in or register to reply here.
Share:
Facebook Twitter Reddit Pinterest Tumblr WhatsApp Email Link
Top Bottom