This is my entry for this vanity content, and i hope i did ok 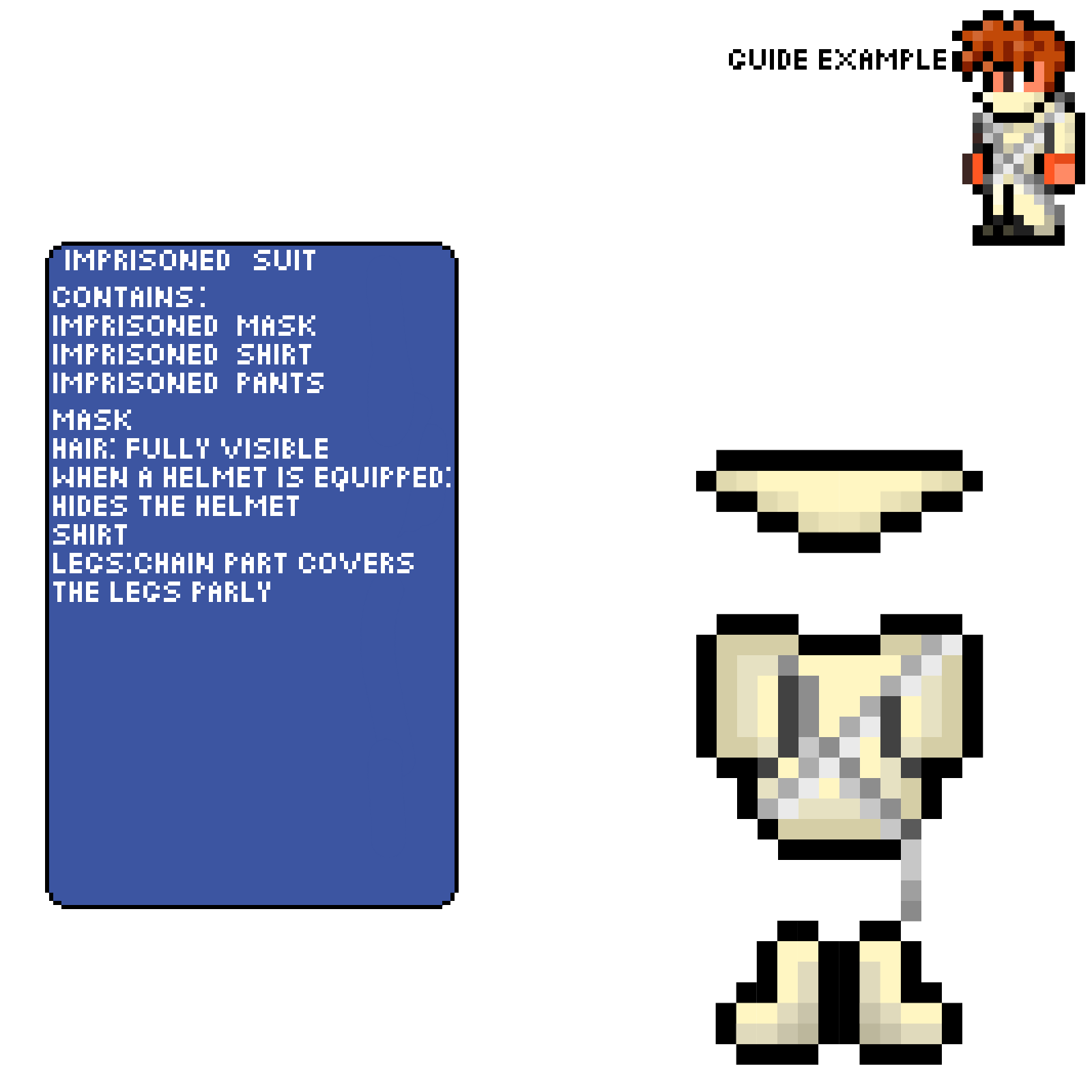 It might not be the best, but at least i was trying
i also wanted to say Dyes do not change the chain color
Last edited: Mar 24, 2020
O

FIRST OF ALL, I don't know what happened with the background but we must deal with it. But today I present you, Tikru the cat! I know it's a weird name but I used to have a cat named Tikru.
He is a white cat (the real life one wasn't white though) and he has a blue collar and blue shoes. He does look scarily very humanoid, but my skills to draw a cat in pixel art is as impossible as getting the nymph banner! This was drawn in some free pixel art website, well maybe that explains the background.
But anyways, here is my entry.

So...i tried using the remains of the Wall of Flesh to create a new vanity set, and this is the first thing i came up with: 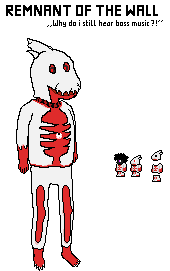 Also please note: Shortly after that part of WoF (you can see that eye right?) regains conciousness it tries to turn the set into armor - and fails miserably, accidently swallowing your soul in the process. While it may take some time after that, once it's over you're gonna be best buds.

PS: Do not be deceived by the look of the bone plates, Smador managed to make them quite stretchy.
S 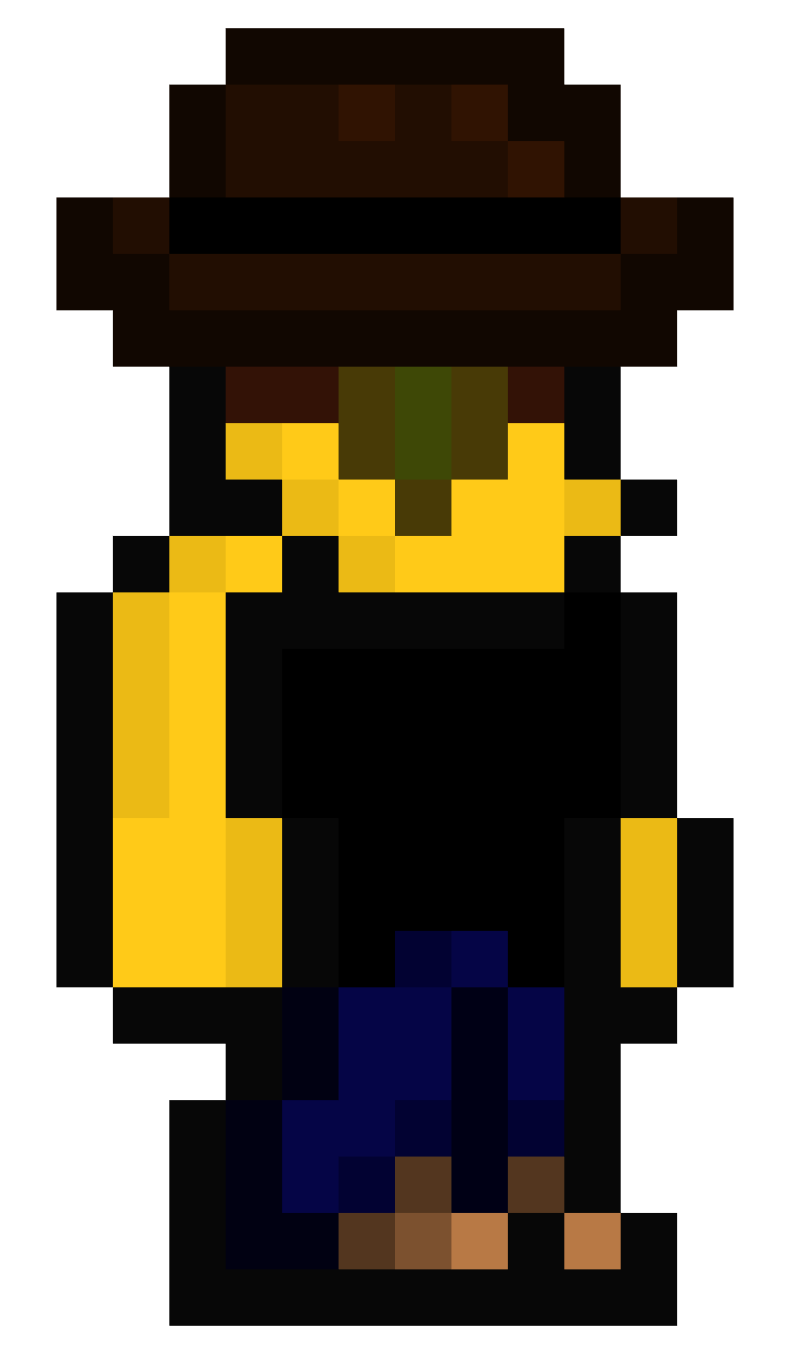 Ok, this has probably been posted somewhere far back in this thread but I'm too lazy to check.

My idea is an japanese lucky cat, nothing too special but still quite cool/iconic/whatever i think. 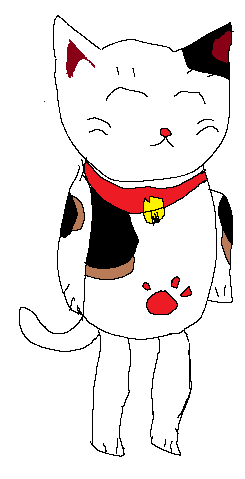 Here's my take on the thing (I think i did pretty good for a mouse+ms paint honestly),
Head
Happy eyes, two small thingies as eyebrows, cat mustasche feeler thingies, and ofc ears - one of them black. And a red nose.

Torso
Red paw on stomach and a red bell necklace thingy. Some black-brown larger dots like shown in pic. Arms with paws.

Pants
Tail! And then legs with paws and the same black-brown large dot thingy.

It should be quite chonky, not a thin cat. But not as chonky as the pumpkin armor. (Imagine one of the mascotsuits that childrens-fun-places-hotels have)
A bell sound when hurt/walking/doing something would be cool.
Extra super cool if player animation become like a cat when walking, but maybe thats too cool.

Remember to make the face look like it's stoned with the eyes and smug smile, thats important to these cats.
B

This is my set, Blazing Knight
J

Thanks for your consideration & the contest opportunity 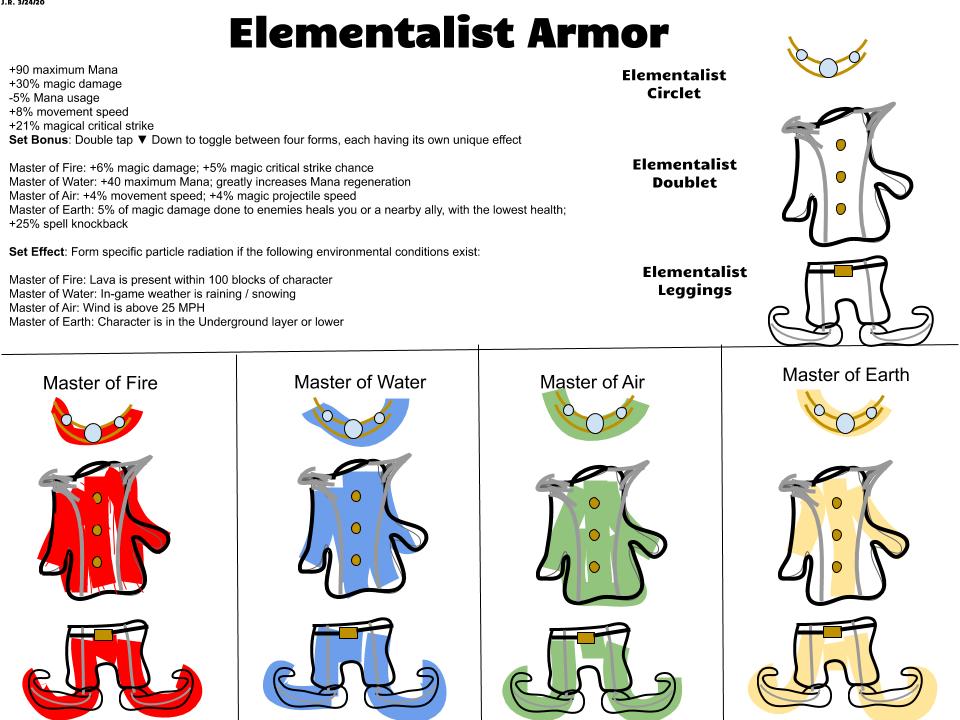 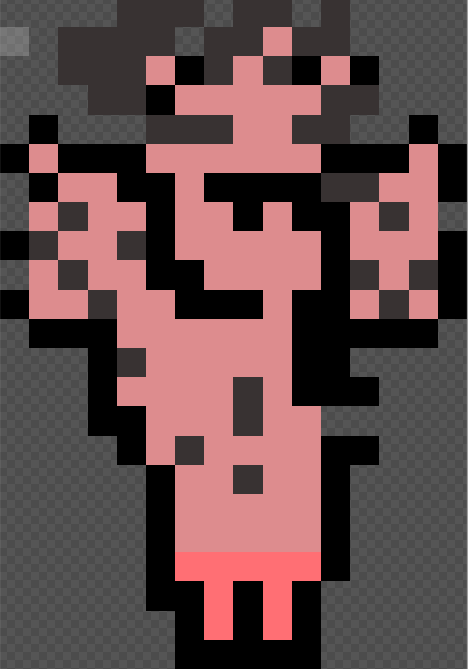 I based it of a wyvern _(._.)_ I suck at pixel art so I wasn't sure how to carry the idea across very well, but hopefully the other version helps 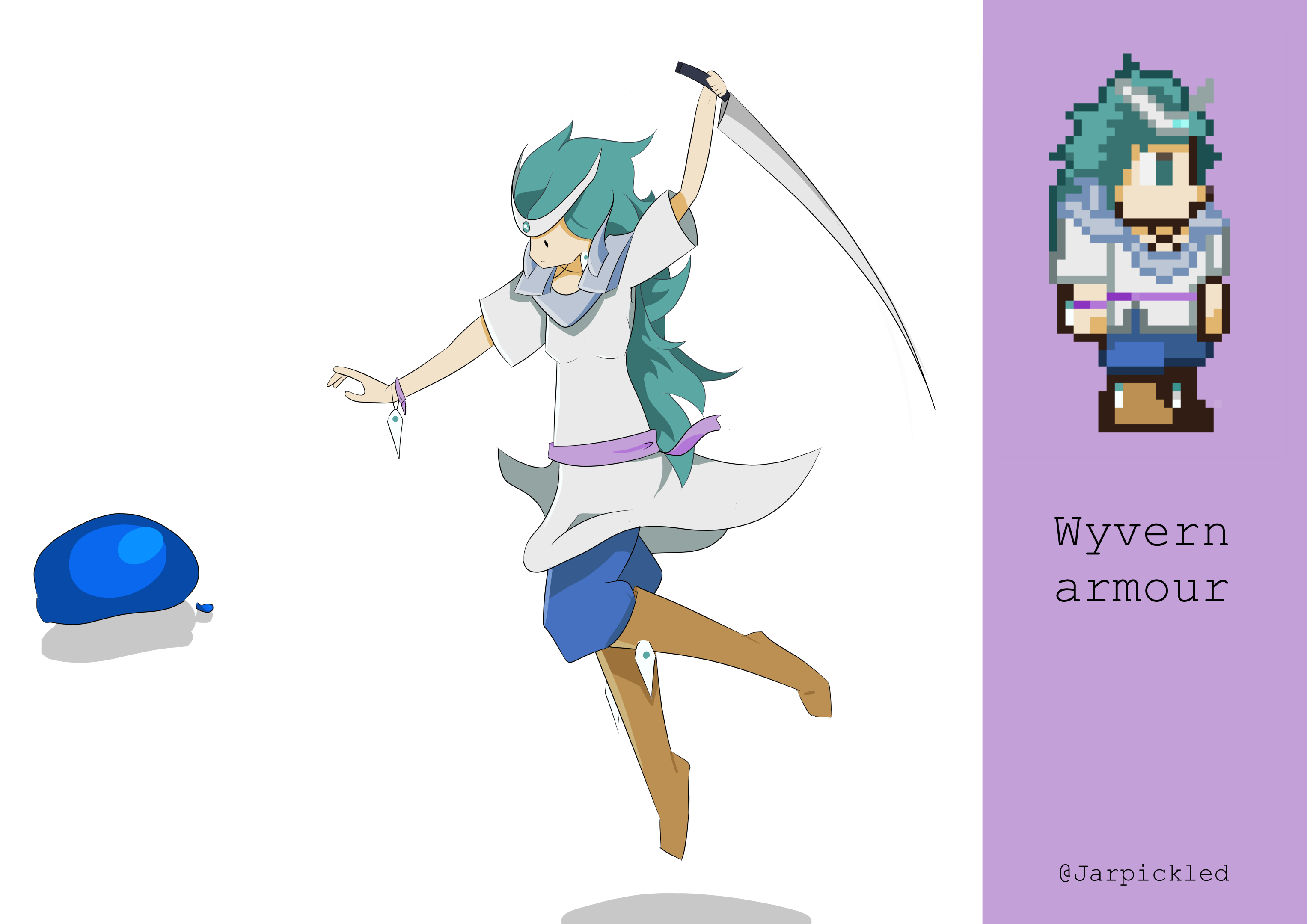 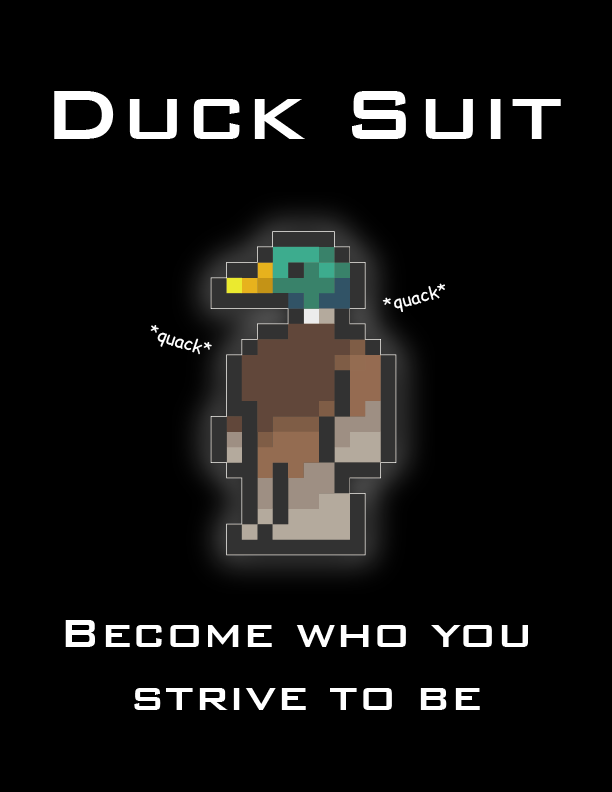 A long time ago, I made this pixel art and used muramasa as an easter egg, but I think now it would be a good idea to share this pixel art with the community
my idea is a female samurai (ok, it may not look like a samurai, but I really liked the result), wearing armor that looks like a dress and a steel mesh underneath and with a hem at the waist (not required if approved to enter the game )
(google translator) 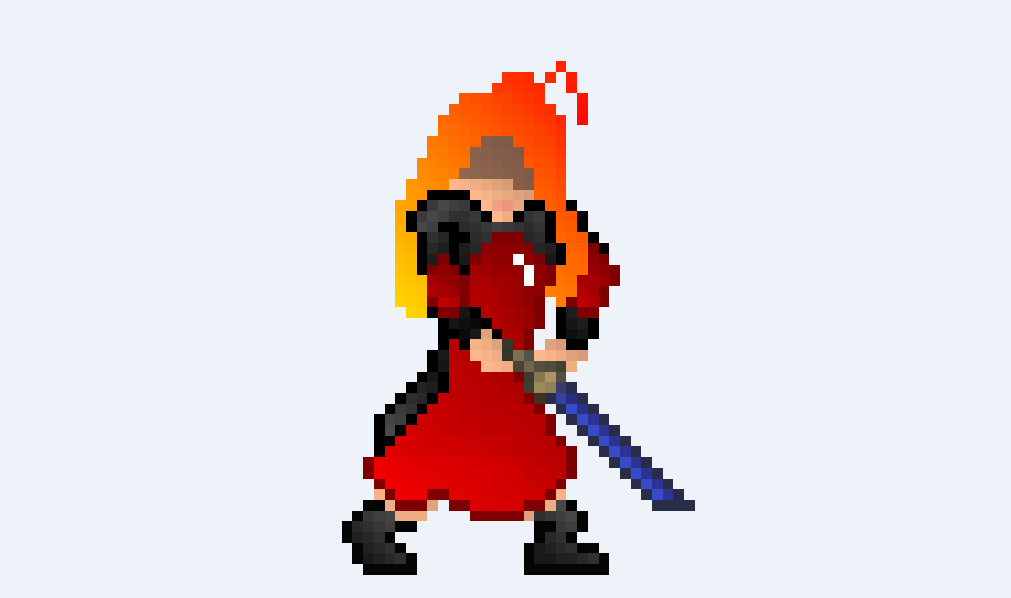 Forgotten Guardian
In ancient times when plantera was first born a lone guardian had been self assigned to the position of preventing the overgrowth of plantera herself.
This Guardian had continuously stopped the neverending onslaught of the growing jungles, crimson, corruption, and hollow.
In the midst of his greatest battle against the natural elements the Guardian had been slowly petrified due to his constant interactions with deadly flora and fauna.
As the petrification had slowly taken place on the body of the Guardian it was soon seen as just another statue among the caverns.
Due to the long state of its Petrification it had been forgotten over time and many generations. It seems to be unknown to even the Order of the Guides.
In Modern Terrarian times The Guardian's original petrified Armor can be found in the jungle almost disguising itself as a regular statue. 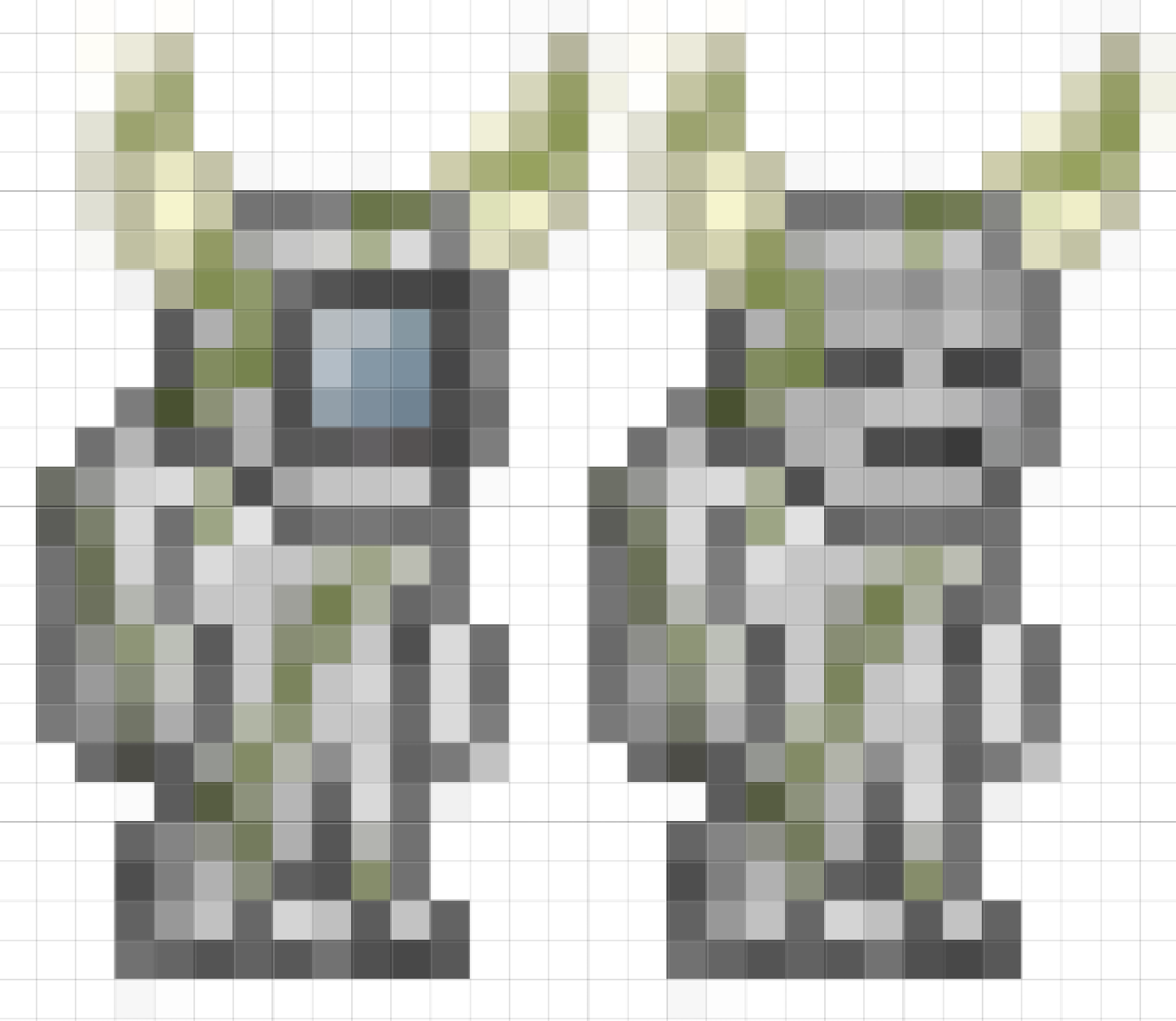 This Old armor is merely cosmetic now as it has been petrified for many years.
The armor looks to be a simple set of plate armor with overgrown vines
The Helmet seems to be the same type of armor but in addition has two horns on either side possibly coming from a large monsters teeth

This is my buse suit, the full set allows you to summon a flying fish that will attack for you. 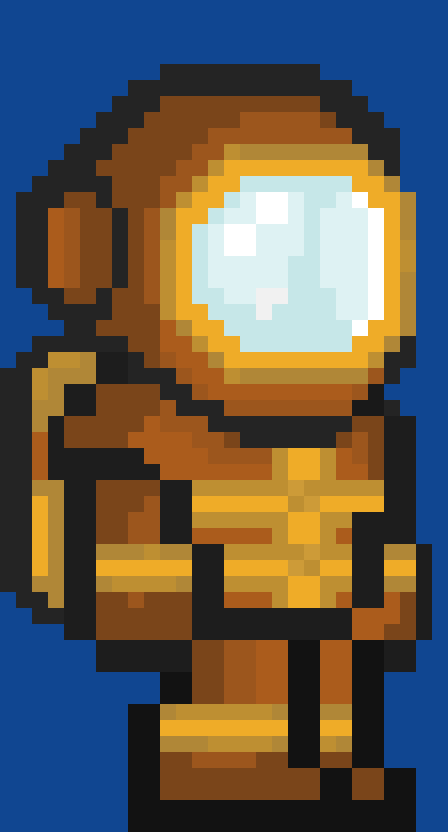 Classic Templar garb, white tunic with a cross, the cloak-type thing does not have to be included, if not the arm is dark grey chainmail (same as the legs) and the gloves are the same color as the helmet and same design as the vanilla metal armors. 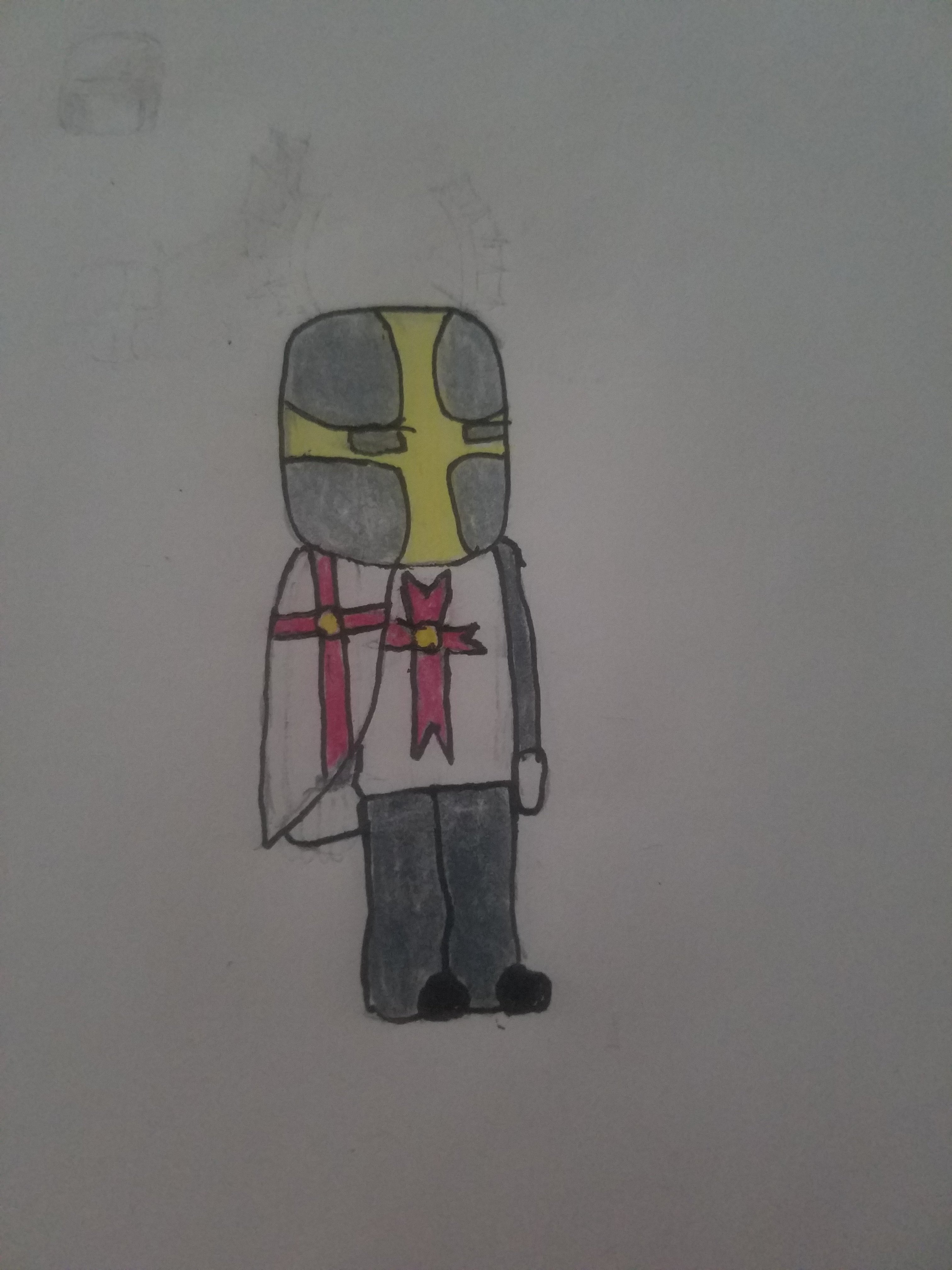 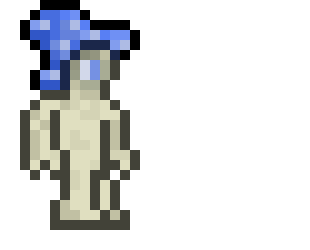 Just as a placeholder, I'm calling this the "Mycosuit"

There's some obvious inspiration here, but mushrooms are sick and it'd be cool to see more of that aesthetic in the game. The goal of this was not to make a Truffle cosplay set, but to make a set that lets the player individualize themselves from him while still looking like his species and leaving the option of wearing armor. I've never done pixel art before and I don't know exactly how terraria's vanity system works, so there might be some changes for the final version if this gets chosen - that's totally fine. There are some issues I have with the current model that may need to be fixed depending on if they actually cause problems as vanity items and a few options to the current model if everything stays as-is. They are as follows:

- The four light blue pixels are directly on top of the normal PC eye. It may be possible for these pixels to be hollow to allow for emoting, though difference in skin tone may make this look weird.
-The face may be removed entirely, as the cap of the mushroom works well as a standalone hat. While this wouldn't work with the rest of the outfit, even just wearing a mushroom hat like this could make for some cool vanity combos using dyes.
-The very back of the cap overlaps the shoulder. By default, I think Terraria places head vanity above chest, but I drew this as is to create a sense of depth. I think it looks fine either way, but wanted to show this as an option

- The head does not account for the nose of the PC model. If left as-is (and not made into the hat mentioned above), it would have to be either shifted forward or replace/alter the sprite underneath to not have a nose sticking out the front.
- There are similar sprite changes throughout the model. These were made to slim the charachter to a more lanky and "Truffle-like" appearance, but would only work if they replaced their respective body part sprite in a similar way to the Djinn's Curse. However, they do appear to be compatible with other vanity items, making them not seem too out of place when not worn as a full set. The parts that are slimmed down are the nose, shoulders, front upper chest, hands, top of front leg, and all of back leg.
- I've always seem Truffle as having not an eye, but a sunken, glowing depression. I'm not which this sprite conveys better in its current form.

As stated above, any changes the official Terraria artists make to this are totally fine.