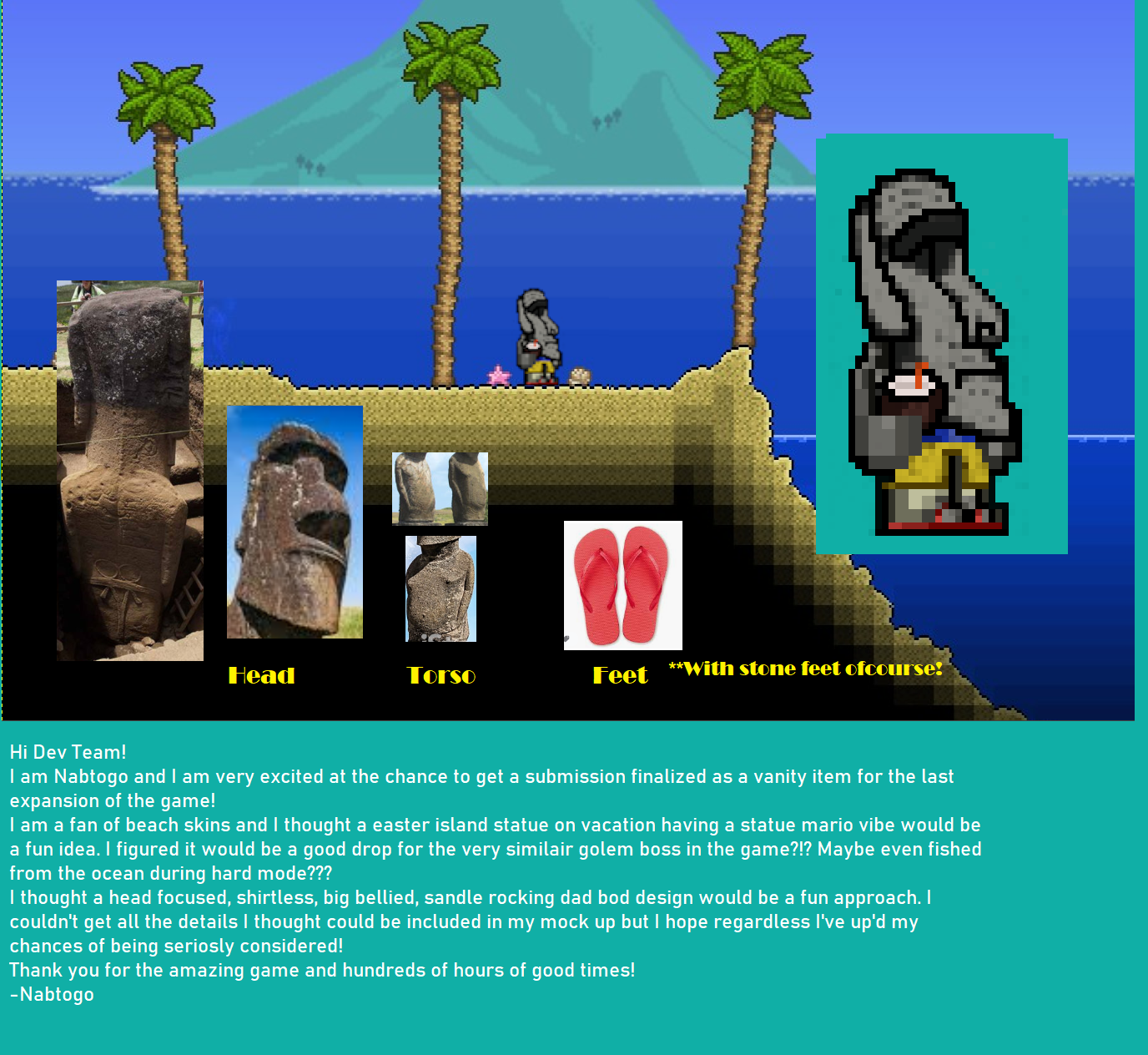 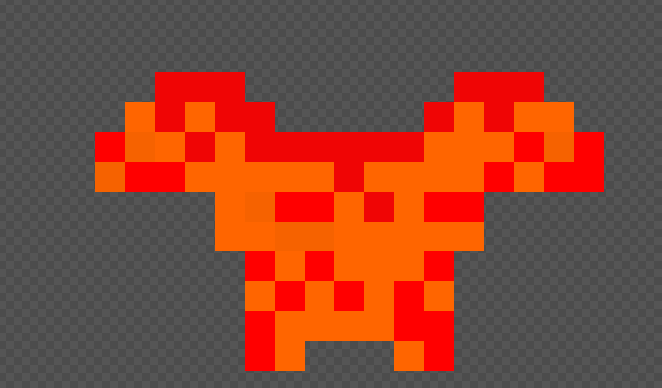 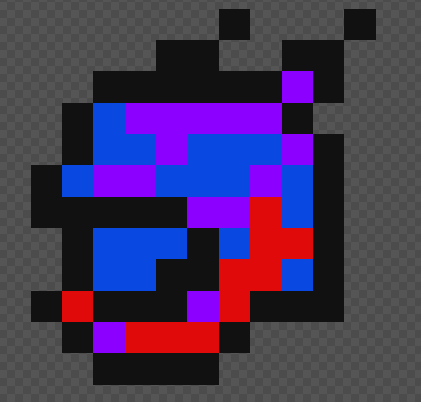 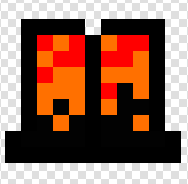 I call this flame emperor armor, the idea is the fire is hotter the higher on the armor, the helmet has purple and blue flames while the bottom of the boots are looking like obsidian. My name is Cole Salmond, I decided the visor would be blue fire because blue fire looks cool, it could also have a cool affect where above it things look hazy, like on a hot summer day things far away look wavy. Thank you for your consideration.
D

I made a Jester set with a Jester hat, Jester Shirt, and Jester pants. Good luck to everyone.

Image is a little blurry so here is a link without the image being blurry https://forums.terraria.org/index.php?attachments/pixil-frame-0-1-png.250230/ 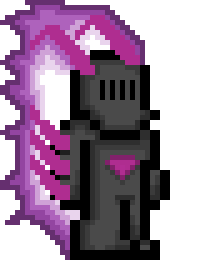 it's like a shadow knight with sick flames coming off of it and stuff, I'm not the best at pixel art but I gave it my all
G

Hey! So, this is my vanity set. Its supposed to be a mutated zombie, with glowing eyes and hands, a half burned body and its larger than normal zombies. Could be called
King of Mutants, but I am not really creative with names. When worn, the custom character will be invisible.

I forgot if I submitted this already but I might as well. If I already subbed it just ignore this.

Even a hero needs rest and why not in comfy pajamas?
Pajama vanity set that starts plain white with bunny slippers
And maybe the design changes per dye...? 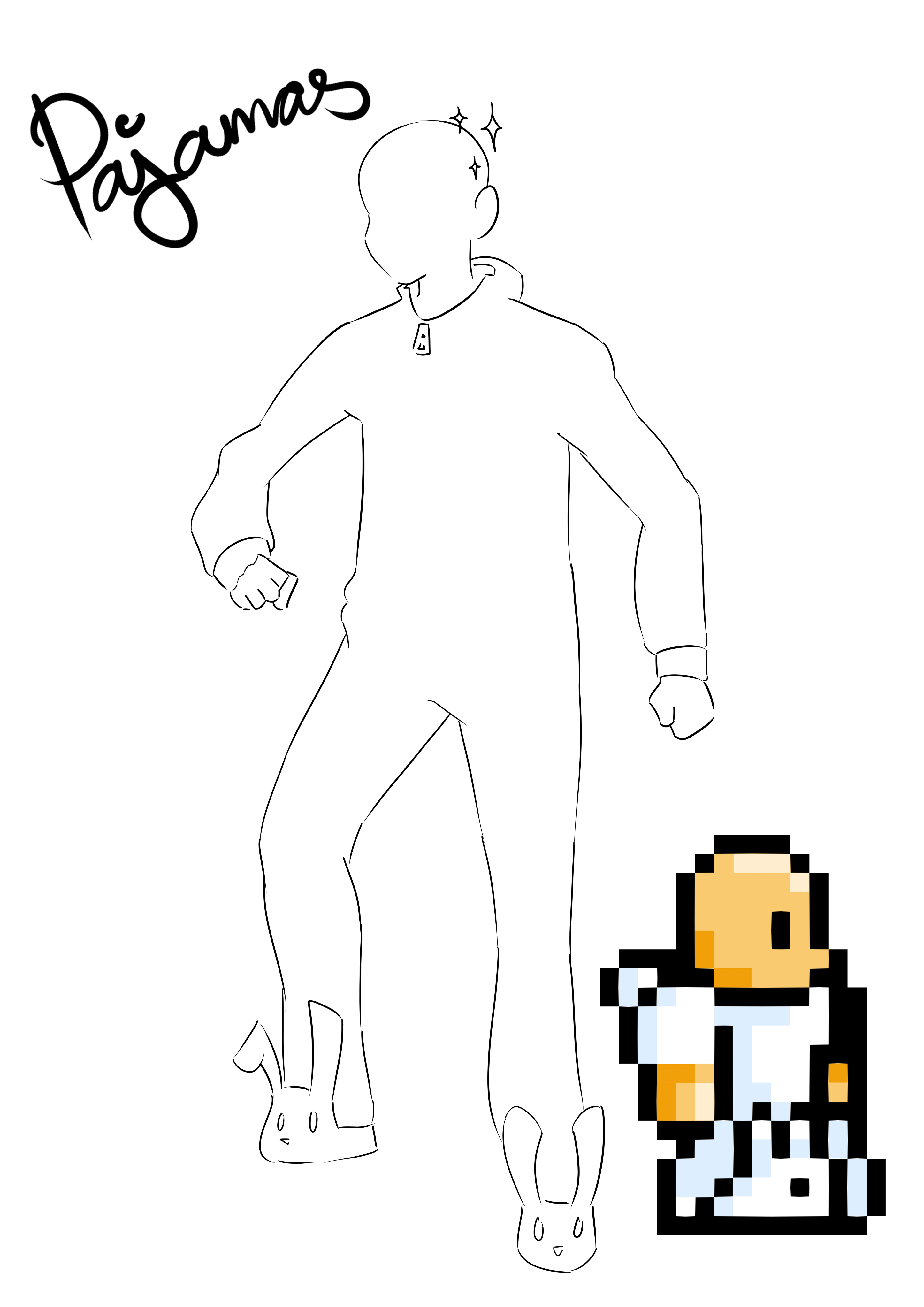 helo this is my submission

i call the set "muffin set"
the torso part can be called "muffin wrapper"
idk what to call the head maybe something like "blueberry cap"
torso tooltip: "hmm... smells like 14 kids"
head tooltip: "somewhere in these blueberries there's an idot"
theres no legs


all speling mistakes are on purpose

The flames change based on world evil or due 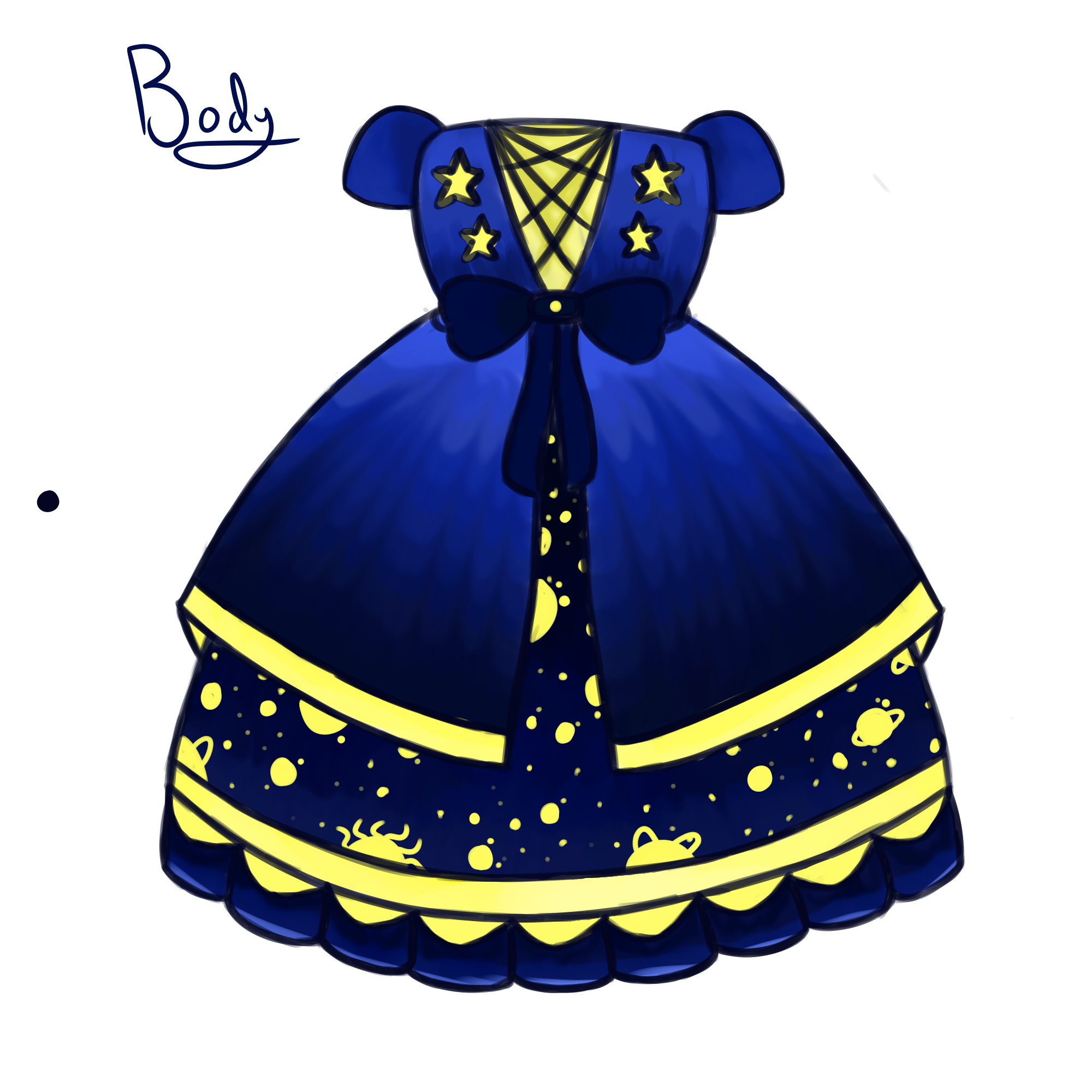 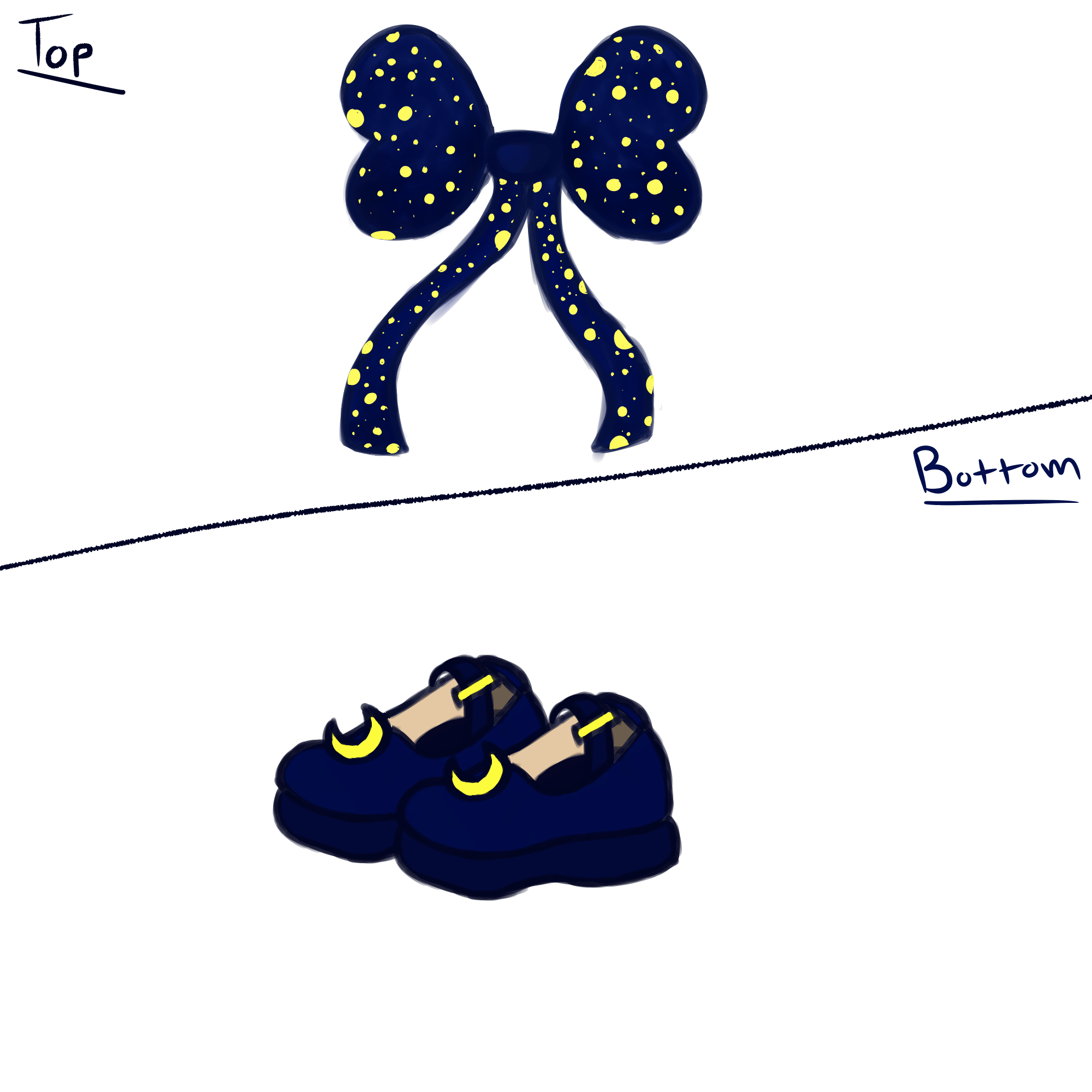 I tried my best to create an awesome lolita-fasion type dress!! I hope everyone likes it!! 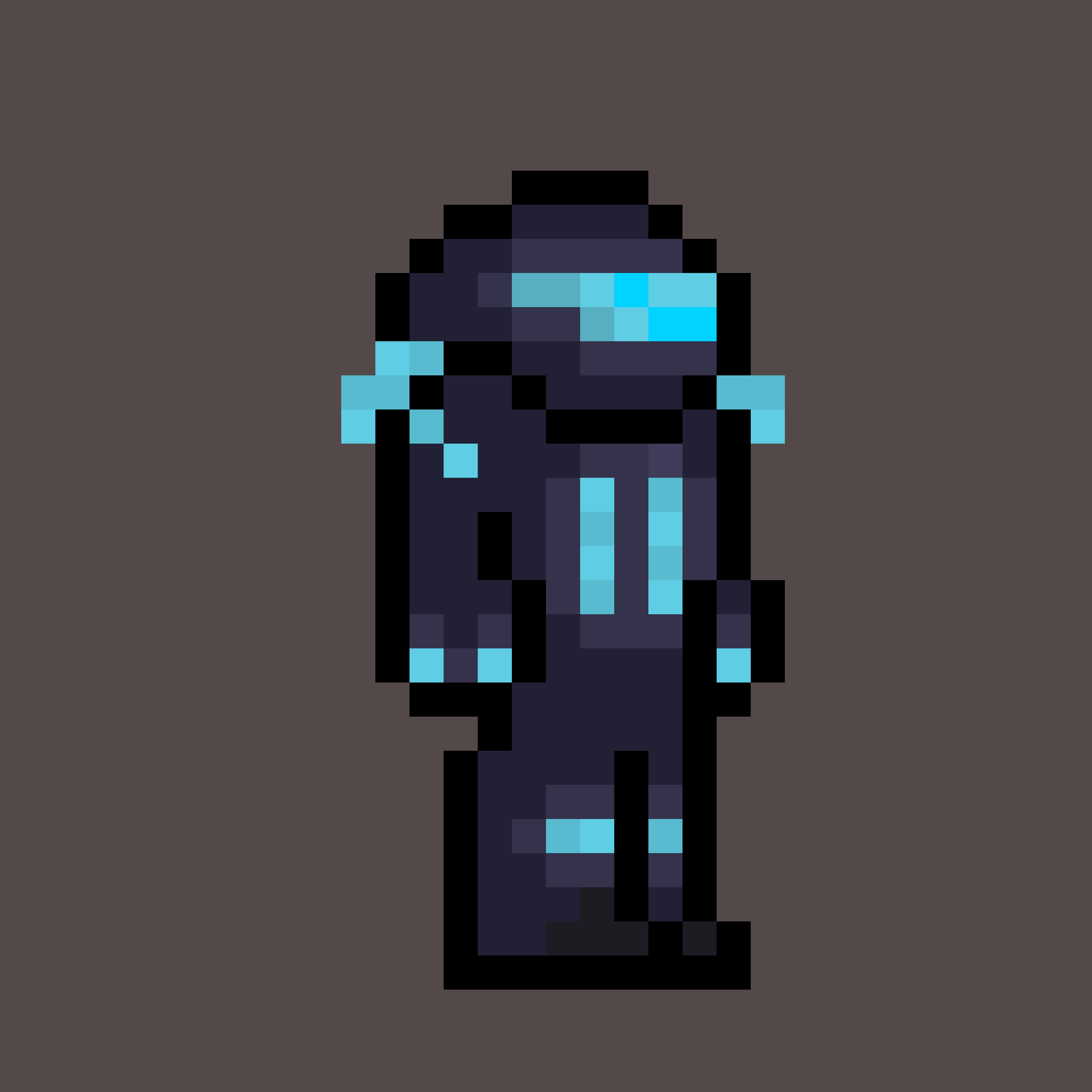 behold! the worst set in this competition
Last edited: Apr 11, 2020

Did you get the joke?

Vanity Set can be dyed to look like a ton of different species of Mantis.

I made a Pancake Vanity.

All the things are pretty much the same:
Butter = Helmet
Pancake/s = Chestplate
Plate = Leggings

Choose whatever your preference is. I can't decide whichever one is better. But If I do have to choose I go with the option on the right.

I Also forgot to mention that these are not 100% finished. I may update them over time 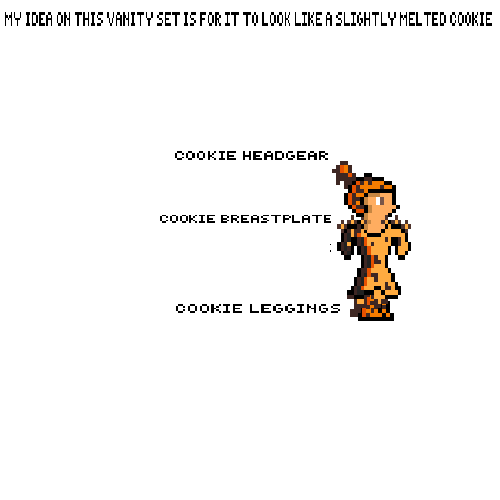 I hope this is okay but it was a design for a slightly melted cookie vanity set, his armor is meant to look like a cookie

For as long as the shoes existed I've wanted a chance to refurbish them, and I'm so glad I might have a chance! The others took a little longer to think up, but I think they turned out pretty good. admittedly I'm no artist, but I hope you consider my contribution anyway! (Thinking of something for the seaweed was a little difficult if we're being honest, but I think I thought of something clever.) 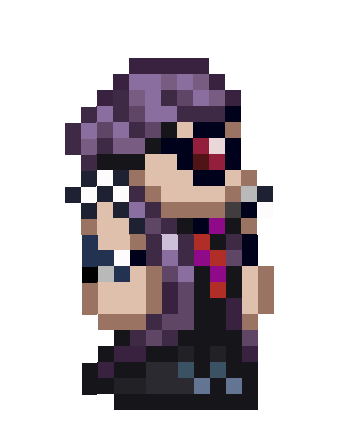 Beanie, goggles, leather coat with spiky sleeves, spiky bracelets, graphic t-shirt, and boots. (Pants don't matter too much. They are hidden by the coat.)

Colors are simply a suggestion. I only chose purples and reds because I think they fit the magical vibes.

For a female design, it could have a cropped shirt, shorter coat, and heels.

The goal is for it to look like a sort of punk wizard.

Been playing Terraria for a very long time and it is something I am very passionate about.

Also I made an account just for this, so it better be worth while lol

Hello! First of all, this vanity set is called the Cryptic Set
Whereby, there is the ...
- Cryptic Leggings
- Cryptic Torso piece
- Cryptic Headgear: the headpiece has its own animation of 6 frames [hence the 6 copies of models and gif (the animation doesn't have to be a necessity)]

I personally like Aaron's Set, Red's Set and Loki's set and used them as an influence for this concept [I especially like the Set animations of the armour]
Hopefully, you guys would like this vanity set to be seen in the game!

This is my submission: 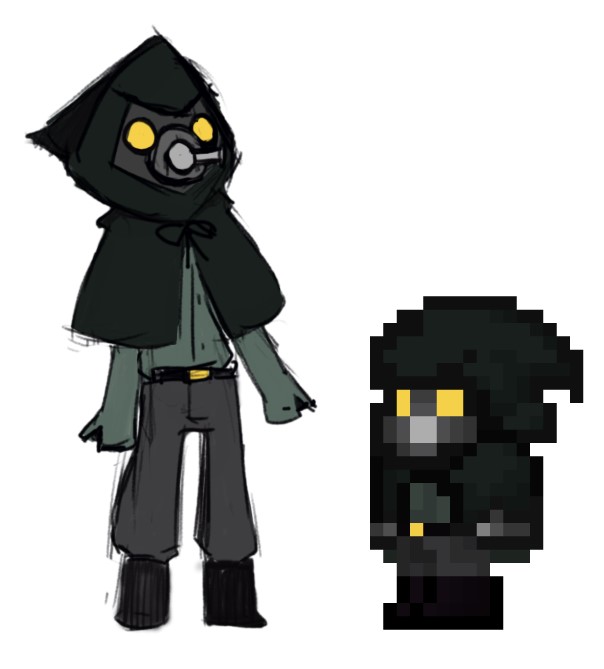 It consists of:
a hood and gasmask as the head accessory,
a cloak and button up shirt for the torso,
pants and black boots for the legs

The sprite made is not the best but it's just a rough idea of what I think the design would look like in game (I am also sorry for the rough sketch if it's hard to understand...)​
S

Hello. I am sending a goblin slayer to the contest (oh, I'm afraid for the originality). 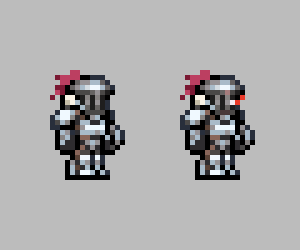