Pixel Art Kerem(Me) made sprites from my collection! & howdy!

Oh boy! It's about time that I need to get out from shadows! It' s boring around here actually but I believe I can spice it up with my skills.
I'm not taking requests; because I encourage you to sprite too.
I'm not good at huge sprites but others; let's go baby! Actually I can do them but it will take me an eternity to finish least one of them.
So lets upload some dope sprites: 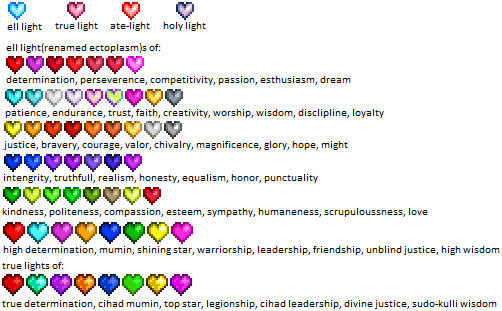 Gold standart whey(for your muscles). Just don't take over amount.(Even the H2O's over amount kills you! More we know!)

So someone tried make tf2 mod and made some sprites: but all tho, they needed some remakes: so i remade them and added new things to them to such as christmas version of a shotgun, australlium scattergun and shortstop pistol with Bla2e's weapon palettes.
(And there are 3 Bla2e's sprites here to complete the set but i don't own his sprites.)

So this is my favourite one: this is a ancient bird being called diatyrma. Straight savage massive birds that eat ancestors of horses. If they lived in modern life tho... they would attack the regular horses.

Moas: you know them! But interesthing enough they managed live up to 17th century. But geographic expeditions what made them eradicated.

Omg! Look what i did just make: dragons: they have only one type but with their power of advanced adaptation their types are fire(regular), ice, dark(shadowflame), phantasm(soul), cursedfire, ichorfire, thistlefire(contagion)(ps i did sprited them but those are for tomowrow.)

Un-adaptable kind: crystal dragon: made by zero exodus, heavily rewamped by me. Ability to shoot lasers.

Stardust dragon: crystal dragon's lunar counterpart and stronger one. And made it more dragon like btw.(ps. since they're much more stronger and clever; you can only summon 1 of them!)

Your not the only one that played whole kingdom rush series. This is bandersnatch. From kingdom rush origins i say.

My version of echo flowers in undertale.

Elderberries from calamity mod now has ability of grown in a bush.

Life fruits has a growth cycles and farming functions now!

Senzu bean. Why not?

Those are my versions of turkeys. Male is being prettiest while female is regular. Did you know? When they first discovered they weren't so fat. Time and time they gained more weight. Talk about more meat service.

Phantom ruby: an enigmatic gem that contain soul of Infinite: a limitless foe to be exact.

Awards: trophies, medallaions, medals. Bases: trophies by starbound, medallions and medallion heads by zoomo. Improvements by me.
But i deserve the platinum.

Now that's a cool one: barret-50cal. This guy can one-shot the tanks with it's 50cal ammunation. Shocking ain't it?

Benelli nova tactical. Wanna go hunting with me for some venison?

This is for JPAN: freezing fishing knife.

Sonichogs: Unlike hedgehogs: they don't carry cancer & rabies. They won't get nearly blind & deficate all the time while running. But just like hedgehogs: male ones eat their on babies.

Sharks: regular shark with to palette. 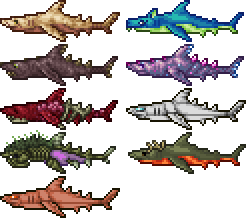 New rage inducing enemy called: kafirun. Means this is true form of heretic. They know Allah(God)'s existance but they refused to go it's path. They're are one with Sheytan(Satan). Casting forbidden spells is in their nature. Just good luck beating them. 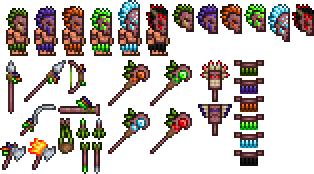 Base: by Eli: idea, edits, colors: by me: i present you the notch's diamond sword.

Now the fishes: zoomo attemped first, anubscorbiak did second and i used those to finish them all. Killing them on water have %50 chance to drop their item form. You can do it if you want to.

Part 2 of the fishes mates: now you can see them in water.

Utility fish mobs: anubscorbiak did most of them, miltvala did the crimson hatchetfish's item form, and i finished this.

Bunnies: terraria's most iconic creatures with major realism on their bodies. And i did hare too.

Can only be used by ben gallados: child of kawa minion rewamped.

Elin la verde.:3. Oc in terraria style with her old and new attires.

Mices are renewed by me + venomious hostile rats! Did you know? Venom equals as hemotoxic poison.

Bats: renewed. First row is passive now, second row is neutral(new idea: friendly till you attack), others are hostile.

Silverfish: hostiles that are hide in stone blocks.
Bedbug: same as silverfishes except they hide in wood planks and they're much more hostile. 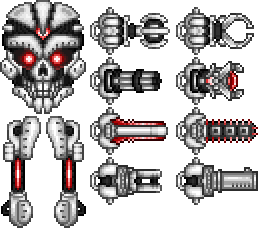 Skeletron prime has been renewed with: shape of brutallama and shading of re-logic.

Aluminum: industrial and can't be used in battle: highly corrosive that can cause rust poisoning and it's very weak(like copper)!

Diverman sam, it is for your usage: banjo but advanced banjo: greater than eskimo banjo.

I'm a huge Bear Grylls fan. So I sprited every bg tools for survival.

Industry: solder and tungsteel is not mine and i do not own them. Carbon ore is there right? Well you need to destroy an evil altar to bless your world with pure carbon instead of the graphites and coals. Extract the soils with extractinator to get soil metals. Gas canister bases by snailsattack. 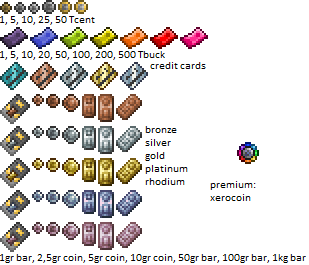 What happens if terraria uses modern currency: this happens. Currency is combined item. There will be 00000000000.00T on your currency as you play. Credit card bases by yaster goodman. Our coins will be banking currency. Instead of copper: there will be bronze. Rhodium color by sergo.

Blaze: from minecraft: will spawn in underworld.

Ohhhhhhhhh.... this one: from terrariaonline days: made by someone, heavily rewamped by me. Shading is nice. This is more reallistic sized cows. And there's three types of mushcows: cultivated, red and glowing one.

Closest to cows and olso domesticated ones are water buffalos. Their milks have more fat. Making them more useful at making sweet pastries.

Soul raw material can slowy get corrupted after listenning Sheytan(Satan) a lot. There's anti-determination which is Chara, fear which is Bete Noire.

If I were redigit: I would remove workbenches and add new ones: crafting bench is guide's gift and it's craftable too. Next up we have tinkering bench which is level 2 version of crafting bench. Level 3 has advanced tinkering function and more recipes at hand. Level 4: brutallama for arcane armor fabricator & izabelle for bounty hunter station: 2 of them combined with luminite: lvl.4 of the bench: architect's techtable.

There's a bit error on this one: pixel error. Well this time it can pass: why? Because this symbol! i tried everything to make it fit but i failed this time. This is an alchemic symbol of transmutation. That's right. Transmutation tablet from tekkit is back. But it requires dark matter(from thorium mod) and philosopher's stone to make.

This is the one i worked least amount: furnaces renewed, yes. But level 1 is vanilla first, 2nd one is blast furnace by someone but has been remade by me, 3rd one is olso from someone but rewamped by me, final level one is from thorium mod.(Unlike red: i will be more idea accepting.)
Update:

Instead of soul forge: there's atomic furnace. Atoms that formed powers: you're using those to advance further. Thanks starbound.

Unlike the previous one: i worked more. Level 1 is an anvil, level 2 is anvil forge(from starbaund), lvl.3 is modern anvil forge(olso from starbound). You're already know the final level. Loom by vanilla, modern loom by jestex(RIP): rewamped by me. Washing machine by zoomo but rewamped. Mega-forge by dragonith in starbound but terraria styled by me. Viking anvil(by jestex: i will miss his everthing(even himself)). Smithy's furnace set by chadwick. Reason it it here because it's a good furnace and anvil combo. But it can smelt and forge.
Update 1:

Secondary forges. You know them
Update 3:

Alchemy table is from vanilla: but it's lvl.2 version can make more potions and flasks! Chemistry table for basic chemistry. Crystal ball from vanilla. Enchantment table: by me.
Update 1:

Alchemy table has a 3rd stage now: which is alchemethorium.
Update 2:

They're not removed! So don't worry!

Tools for survival are made here:
Foraging, wayfaring, agricultural table from starbound.

Furnitures you say? Well, here's the carpenter's table then heavy workbench. Project-deco-en is a martian project but you'll get in pre-hardmode in quests(if those existed). Purpose is making furniture out of impossible items. Horewer! It's not done yet: glass kiln & clay spinning table is pending.

Enchantment tables adds enchantments to your items, but cursing tables adds Curses to your tools to affect other players. #bewitchingtocursing. Worry not tho, there will be another station that will be new bewitching table.

i believe you are talking about the short lived tf2 mod me and @quickseed40 did a while back. but your remakes are really good!

stevenawesome1018 said:
i believe you are talking about the short lived tf2 mod me and @quickseed40 did a while back. but your remakes are really good!
Click to expand...

Thank you man! We're are born with those skills.

It's that random time where i go back on back on the Terraria forums just to look around. @kerembarsbey nice remakes of my TF2 weapons, some of mine weren't good to begin with. I couldn't care less if you used those sprites since I don't really play Terraria anymore or mod. Also nice Delirium profile pic. I beat him yesterday in BOIA+ really close fight! https://imgur.com/a/4vadU If you care to see some pics of it.

These are really good sprites!

hey @kerembarsbey , would you mind if i used those sprites in a mod i work on?

And delirium is gud.:3

Your sprites are really good . Keep your good work . I think you can even make a new mod with these .

Really nice sprites, my friend! I liked the different cows the most because I think that we need some more passive creatures in our Terraria worlds. Good job! : D

Stardust dragon: crystal dragon's lunar counterpart and stronger one. And made it more dragon like btw.(ps. since they're much more stronger and clever; you can only summon 1 of them!)
Click to expand...

Now, this-
Now this right here is amazing.
You're an awesome spriter, kerembarsbey.