Today we receive a news that there're
-New recipes for stuff; mostly are for engineering.
-Travelling Merchant has new item in his stock, we heard it's very expensive.
-Medusa seem to getting stronger, which mean her head are probably more valuable.
-New statues.

Seraphina isn't really into mechanical stuff.. Maybe these stuff could be great for decoration. 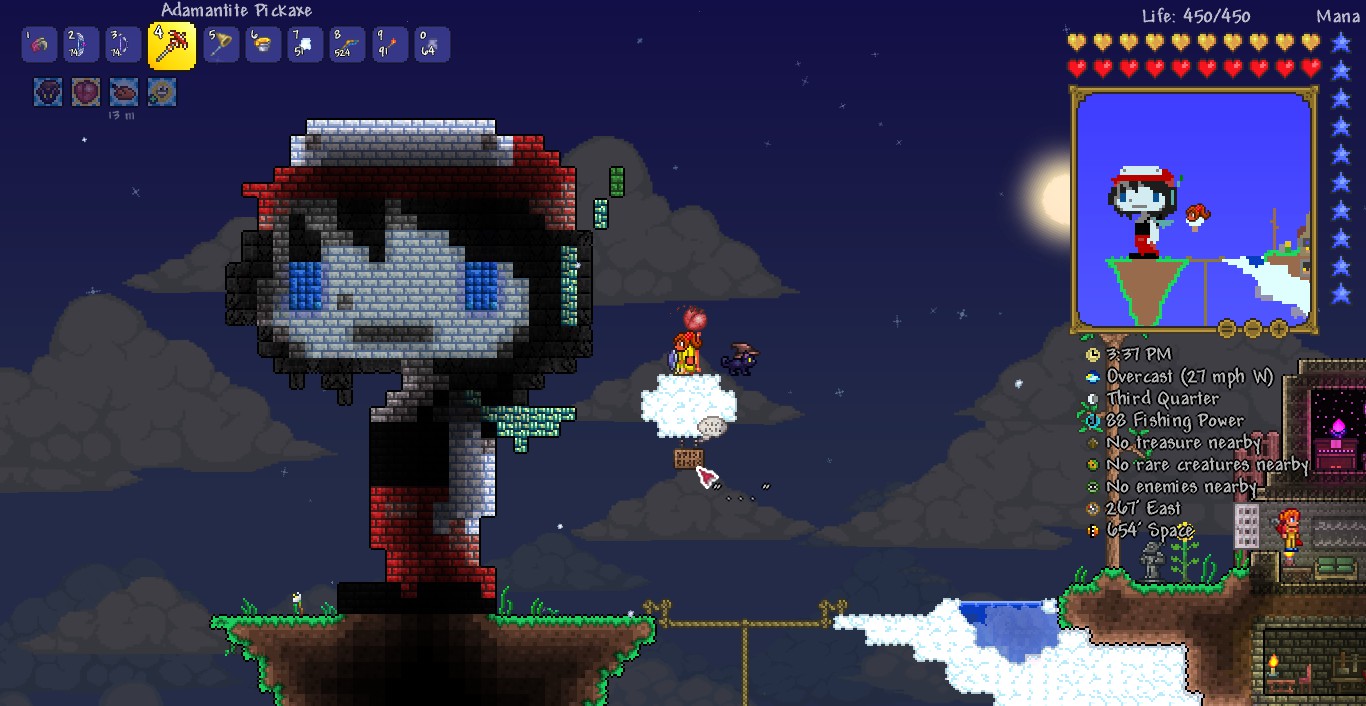 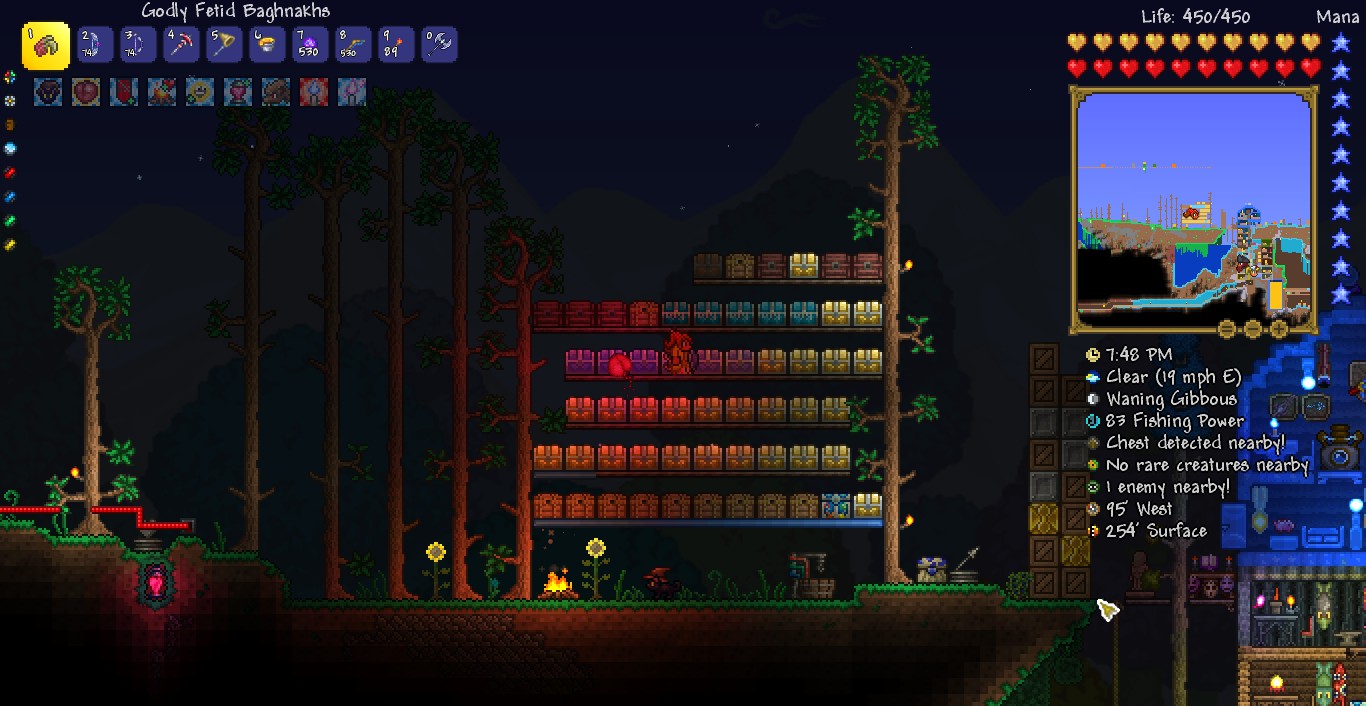 Seraphina decided to redesign the village and her base... 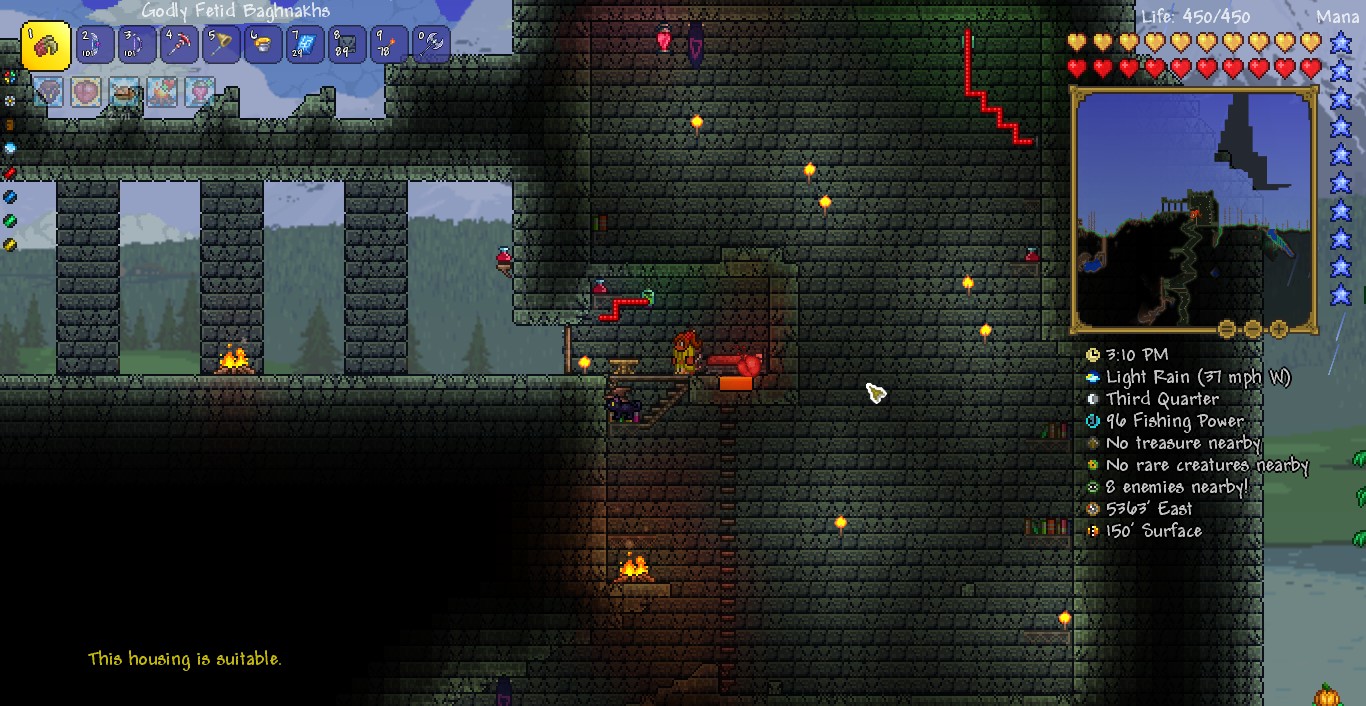 She also build some save point so it can save her time from walking too.

When is the next day gonna be? D:

The God Of Demon's

The God Of Demon's said:
il post mine here too

I'm afraid you posted on the wrong thread.

That is the same way I did how I did the mech bosses but the retizer got in the place I was trying to kill Spaziama (Cursed flame dude) so both were in 2nd form so I had a stadgey to switch in my megashark and killed then both with about 150 HP I used pladilllum armor for the regen. EXPERT RANGER playthrough

When is this going to be updated? This is very enjoyable and surprising since this is in Expert Mode.

Heyyyyy, you can't possibly be fishing and doing that much stuff every day...!
(Oh, I think you mean every real-world day, not in-game day.)

No armor Expert Mode playthrough is a pretty tough challenge, definitely. Keep it up!

what is this supposed to be? is it just a thread where you record what you do in terraria with a role play twist?

GriffdeBiff said:
what is this supposed to be? is it just a thread where you record what you do in terraria with a role play twist?
Click to expand...

oh, well swell! if that's exactly what it is i suppose your doing a good job at it

This is pretty cool.

I’m trying “impossible mode” chalange that I made up. Basically you have an overpowered character, make a new world, make it hard mode, then make a new character for that world. Well R.I.P me.

Definetly this playthrough is good (Steef's Throwing Playthroug is better)

YOUR LETTING THIS ROT LIKE THE OTHER ONE THAT I DONT KNOW ABOUT!

I cannot wait for...

What? I had to stick it somewhere.

But still I cannot wait!

I've got distracted by many things in life. So distracted that I haven't touched Terraria for a long time.

But I want this run to be finish, to complete what I have started.

Even if I cannot tell you when will that is going to be, I'm promise that I will get it done.

I am making some things to make this sound more interesting and so that i can fix a few grammatical errors if found.

Hello, My name is Guide the Guide but people know me by many different names, today is the day that my best friend decided to go on an adventure (and forced me to come along with her)
We traveled to the place that we assume to be center of the island, as I think it will be best place to start exploring... Hmm? Oh! I forgot to tell that my friend's name is seraphina, We are both skilled archers but she has trained in sword combat a small amount and is quicker than me when firing the bow.. Ok, that's enough information for one day, let's continue on the adventure!

She headed over to the west side of the isle... No,that's east side. It has been on the opposite since the evil mastermind has taken over the large island. She can't go very far because there is a bloody and dangerous land island filled with many monsters and perils (A.K.A Crimson) in the way of the path, they say those areas are too dangerous to travel, so she decided to come back with some wood from the the bloody land so we may forge some tools..

We can only hope that the RNG god will be on our side.

I can only assume that he was not due to the fact that we had a very awful first night.

Though thanks to seraphina's swordsmanship we managed to go through it alive.

One of those walking dead out there dropped a (still usable) raincoat. Seraphina seemed to love that coat, She's worn it since.

Today Seraphina went exploring... and took a screen shot with some quotes on it. Let's see...

"I found massive antlion nest near our camp while i went out. It could have something interesting inside."
Antlion? They're really dangerous, and their nest is close to our base as well.. This can't turn out good...

"This ice cavern has so many things inside, but also is very dangerous. Luckily we have a thing called respawn"
That's right, we are all able to respawn, I think that's why people survive in this wasteland nowadays.

"I found this kid floating slowly to the beach, good thing he's with us now, He could have drowned, Or been eaten by the sharks."
Was he injured? I wonder what happened to him...

"It seem like Riley the traveling merchant has come to visit and trade with me... (also my current gear.)
Last edited: Jun 22, 2019