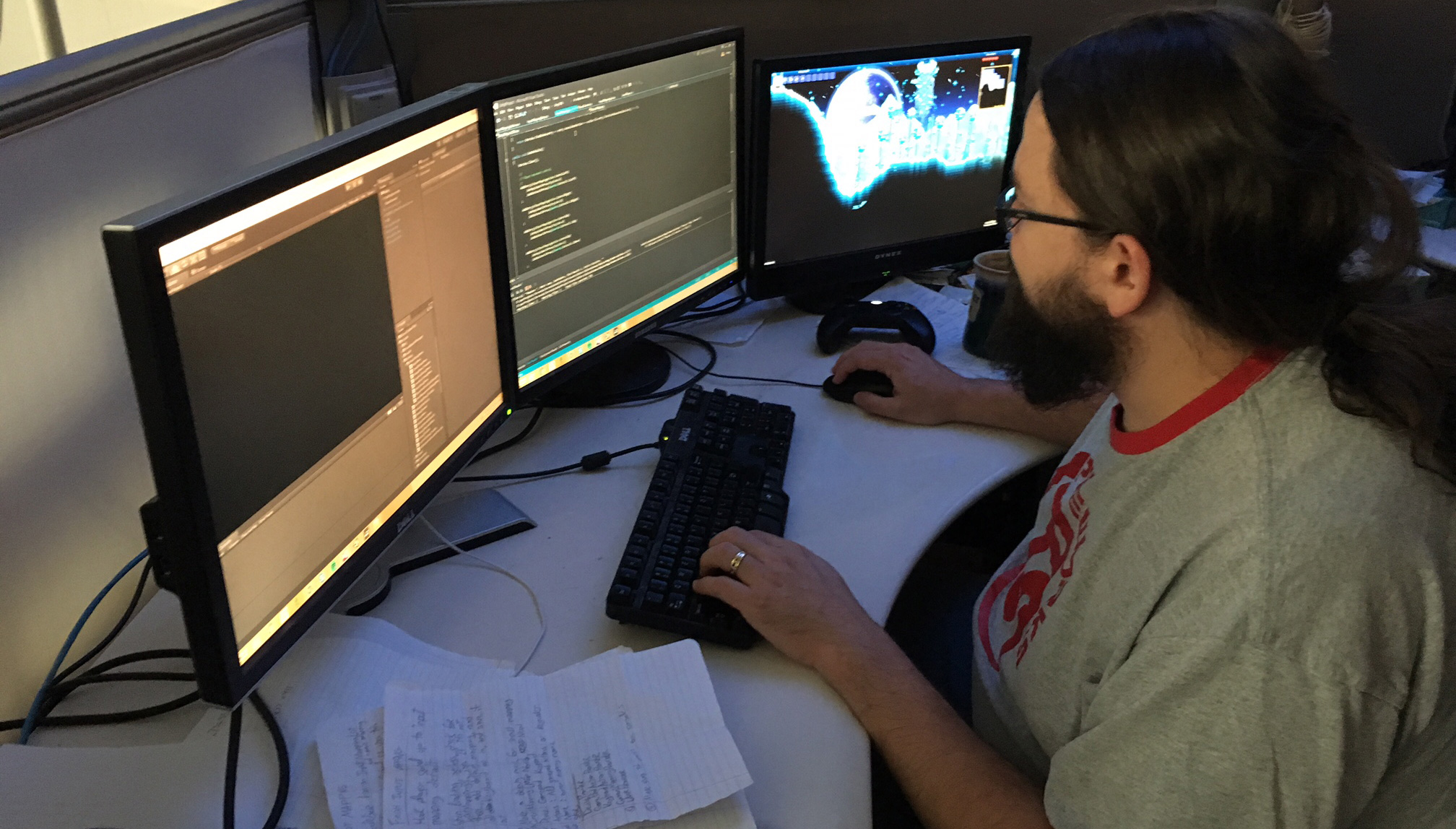 Meet the Team is a regular feature in which we interview members of the Pipeworks team working on Terraria to give you a brief introduction to the people working behind the scenes to maintain and improve your favorite game. Today, our subject is Eric Hope, Lead Engineer on the console versions of Terraria.

I've lived most of my life in Eugene and Springfield, Oregon, and I've been developing games professionally since 2001 -- but my interest in making games started way back in 1985. I had a Mac 128, and the paint program sparked my imagination. I drew characters and copied successive frames into the clipboard, where I could view them, then held down the right button on the scroll bar to animate them. I drew mazes in it, zoomed in as close as I could, and imagined I had an avatar walking around in forests. I had a music program, MusicWorks, that I taught myself how to compose music on. I got myself a copy of Turbo Pascal around 1990, and started figuring out how to pull these things together. Hypercard came out shortly after that, making it a breeze to put together games like the old ICOM games like Deja Vu and Shadowgate. Then, I learned C++, and using DirectX and OpenGL, started making platformer games. I went to college, got a Computer Science degree, and then, started doing it as a career.

I worked on Dance Central 3 for the Xbox 360, allowing transitions between scenes in the background while songs were playing, stitching together dance moves, the Holla Back mode, and support work for the Freestyle mode. I did the UI and in-game cinematics system for Rock Band 3 on the Nintendo DS. I worked on the Xbox One and PlayStation 4 ports of Gems of War as lead programmer during its preproduction, and I worked on Zombie Apocalypse : Never Die Alone, making the AI of many of the zombies, the system for designers to build the traps, and player control.

I'm the lead programmer on the console ports of Terraria. I ported ReLogic's PC code, which was made with XNA, which prevented it from being able to run on all platforms, to Unity, which is massively cross platform, allowing there to be a single code base. I'm overseeing all aspects of its development.

My favorite genre of games has always been open-world, side-view 2D platformers with a persistent expansion of player movement and power, that allows you to explore the world and game mechanics at your own pace, in your own order; games like Metroid and Castlevania: Symphony of the Night. When everyone started adopting 3D as the wave of the future, I figured my chance to make games in that vein was limited to what I could do in my spare time. When Terraria came out, it proved me wrong, but I still never imagined I’d be working on it, let alone leading the team developing the console versions.

We're bringing the full 1.3.x experience on the PC to the Xbox One and PlayStation 4! The lunar apocalypse and moon lord battle, expert mode, NPCs fighting monsters and socializing with each other, new biomes, new enemies, and more.

Wow, this really amazing, this is the way of Terraria Console

Welcome to the world of Terraria sir.

Staff member
Moderator
It's awesome to see Pipeworks interacting much more with the community! I must say - your lead engineer seems extremely qualified, and I'm sure he'll do an amazing job.
Last edited: Sep 7, 2016

Staff member
Re-Logic
Administrator
Having met Eric in person, I'll just say that he is "good people" (as they say in some places) and is quite passionate about making this amazing for everyone.

Very much looking forward to it....and to everyone getting a chance to meet the team. Thanks @ClearConscious.

That's some sweet gameplay on the background there
Anyways looking forward to seeing more!

Staff member
Moderator
As a long time hardcore fan of Terraria, dating back to when the Console edition first released, I'm very excited for Mr. Hope to improve upon this game for all of us, and I can't wait to see what tricks and skills he has up his sleeve for the future of the game.

They moved it to unity? Please, move PC version to unity at some point soon! I beg of thee, .NET is crippling a lot of people that want to enjoy Terraria, and its Microsoft that lacks support for such a poor maintained code-base. I hope someday this will happen!

Staff member
Re-Logic
Administrator
Yeah - it's required a ton of manual piece by piece crafting and coding from what I've been told (all of which is admittedly over my head) - all signs point to them taking the time and resources to do this the right way. High hopes here!

Staff member
Administrator
Yes! This is fabulous stuff, learning about the team is wonderful. This is something that you don't have to take the time out to do, and the fact that you are and that you're sharing with us makes it even more appreciated.

Loki said:
Yeah - it's required a ton of manual piece by piece crafting and coding from what I've been told (all of which is admittedly over my head) - all signs point to them taking the time and resources to do this the right way. High hopes here!
Click to expand...

If they can do it for console porting, I wouldn't mind paying another 20-30 dollars for Terraria again, to have it on Unity Engine for PC. I would literally pay RE-Logic to have it transferred over to Unity than ill-saken .NET Framework. It would also open up new possibilities. I can only hope that maybe some day this may be taken into consideration when content updates are halted, and migration is a prior, even fixing multiplayer in the process would be a miracle.

Lets hope for some neet exclusive items in console 1.3

13 months have passed since this was posted. Anyone remember how long it took to port the first Terraria version to Xbox360 and PS3?

This honestly feels like a long time to re-port a game...