but I'm just a

DeclanOcean said:
but I'm just a kid
Click to expand...

then why are you on the forums?

Why… not when, you shouldn’t be on the forums if you aren’t old enough for discord…

I did not go to discord .

DeclanOcean said:
I did not go to discord .
Click to expand...

noahblast20 said:
No-one said you did… you are making less sense than my brother named Declan… you don’t sound older than ten years old lol… not to be rude or anything…
Click to expand...

You are more confusing than any dream I’ve ever had…

I made a illager resprite

DeclanOcean said:
I made a illager resprite
Click to expand...

i saw that declan. i saw it.

noahblast20 said:
i saw that declan. i saw it.
Click to expand...

DeclanOcean said:
View attachment 354333here it is.
Click to expand...

Declan, this is the second time you’ve shown us the illager you made…

DeclanOcean said:
View attachment 354333here it is.
Click to expand...

We already have an illager redesign, and this one doesn't use the new humanoid base. 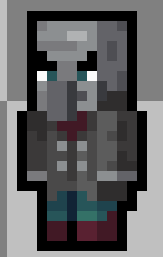 Huh... Stuff happened here.
Hello people of the Internet, and Happy New Year! It is once again time for some epic MMTP news.

For the past months, progress has been kinda slow. I was finishing high school and Lamb's been adding some enemies. But now we're back on track!

In terms of blocks, there's only one block left needed for this update. Once it's done, we'll move on to add walls and furniture.

Now, we've had complaints regarding the resemblance of the Corruption and the End (Hallow) since they're both purple. So we added a bit of green to the corrupt trees. That should hopefully be enough to tell them apart. 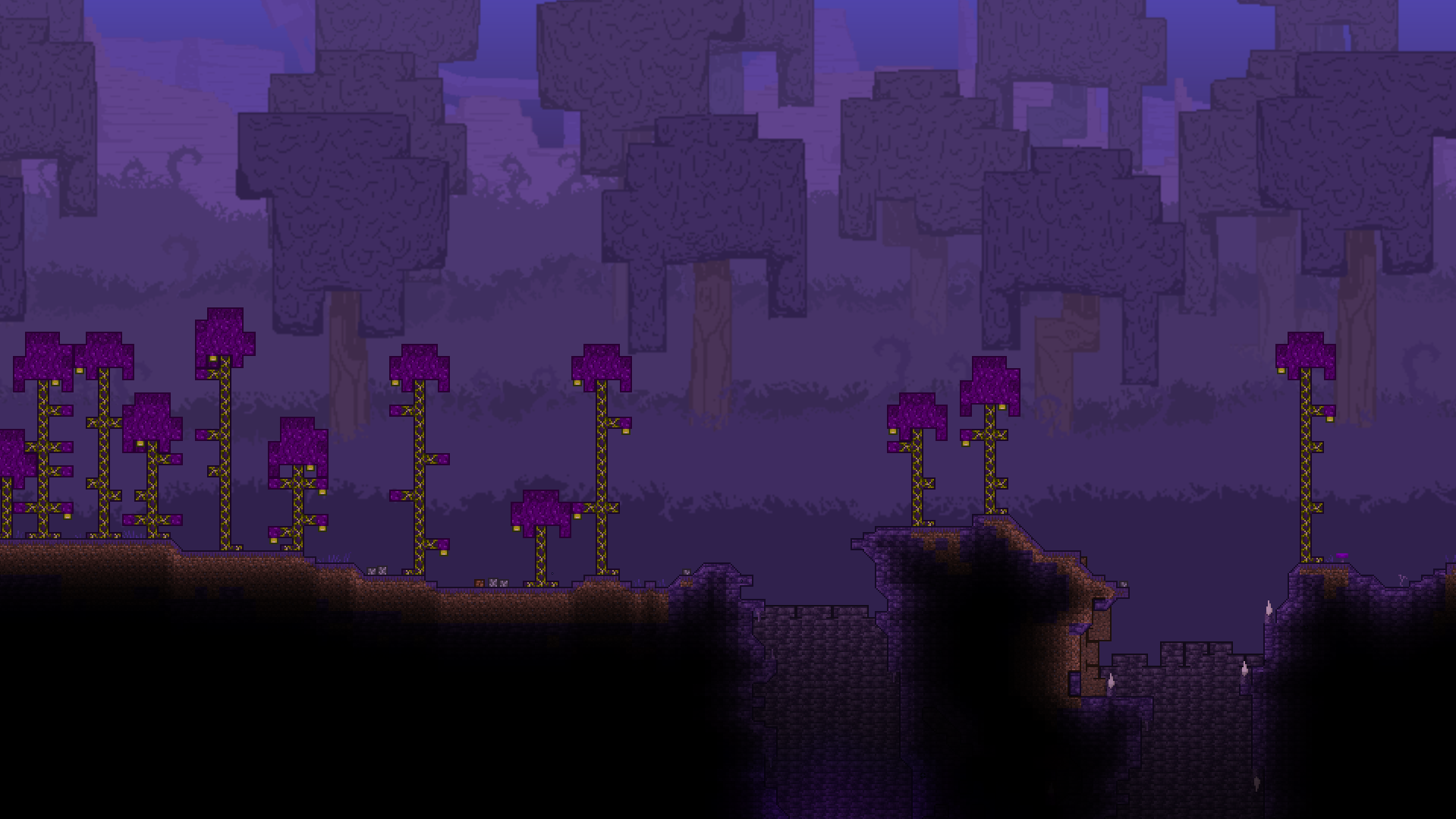 You can't tell me you don't know what biome this is
Lamb also asked me to show this. I present to you our replacement for the granite cave: The Sculk Cave! 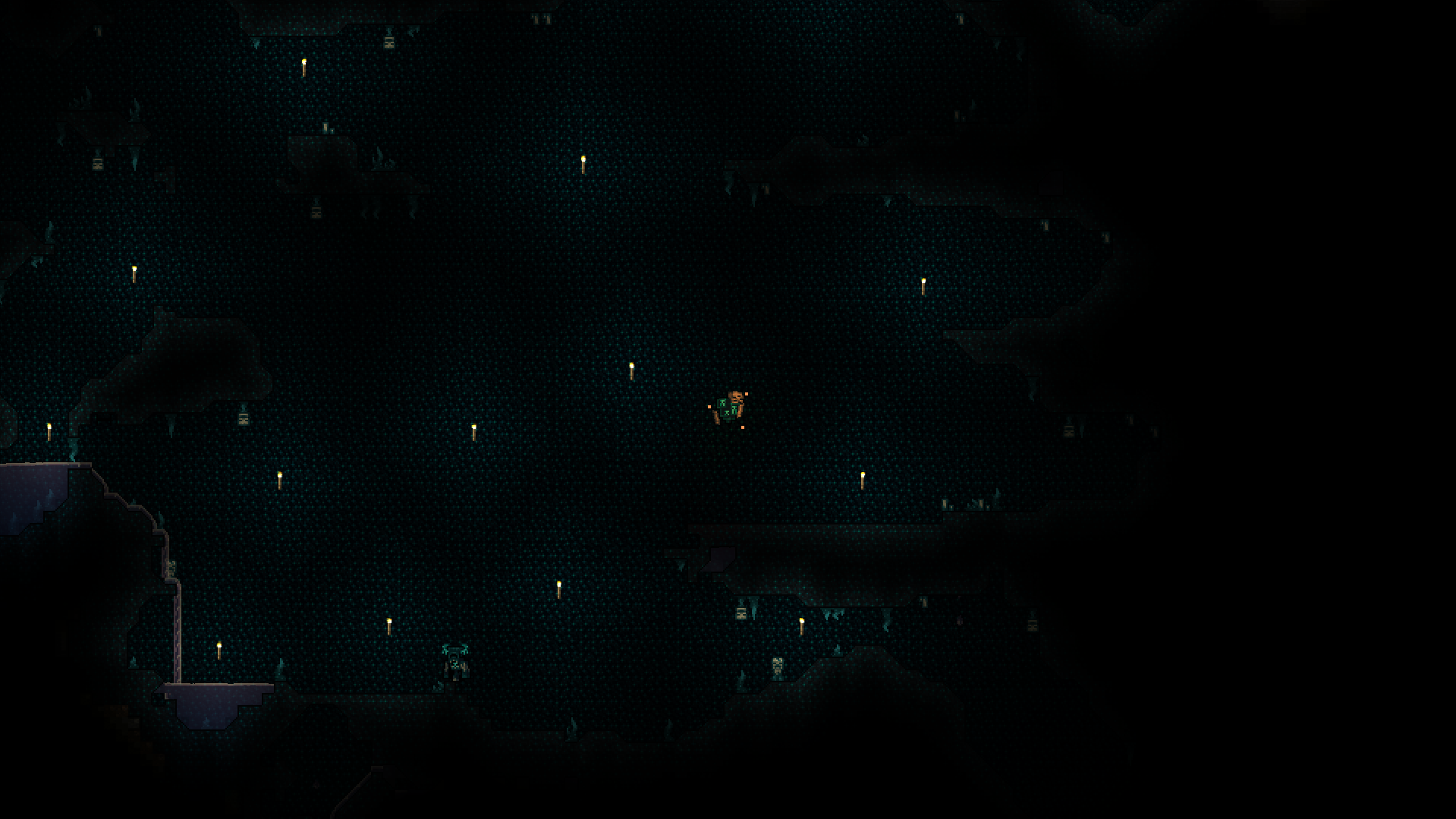 No, we didn't misspell the Warden's name. The Warder is actually his younger brother!
And as per usual, here's a compilation of all new and resprited entities. 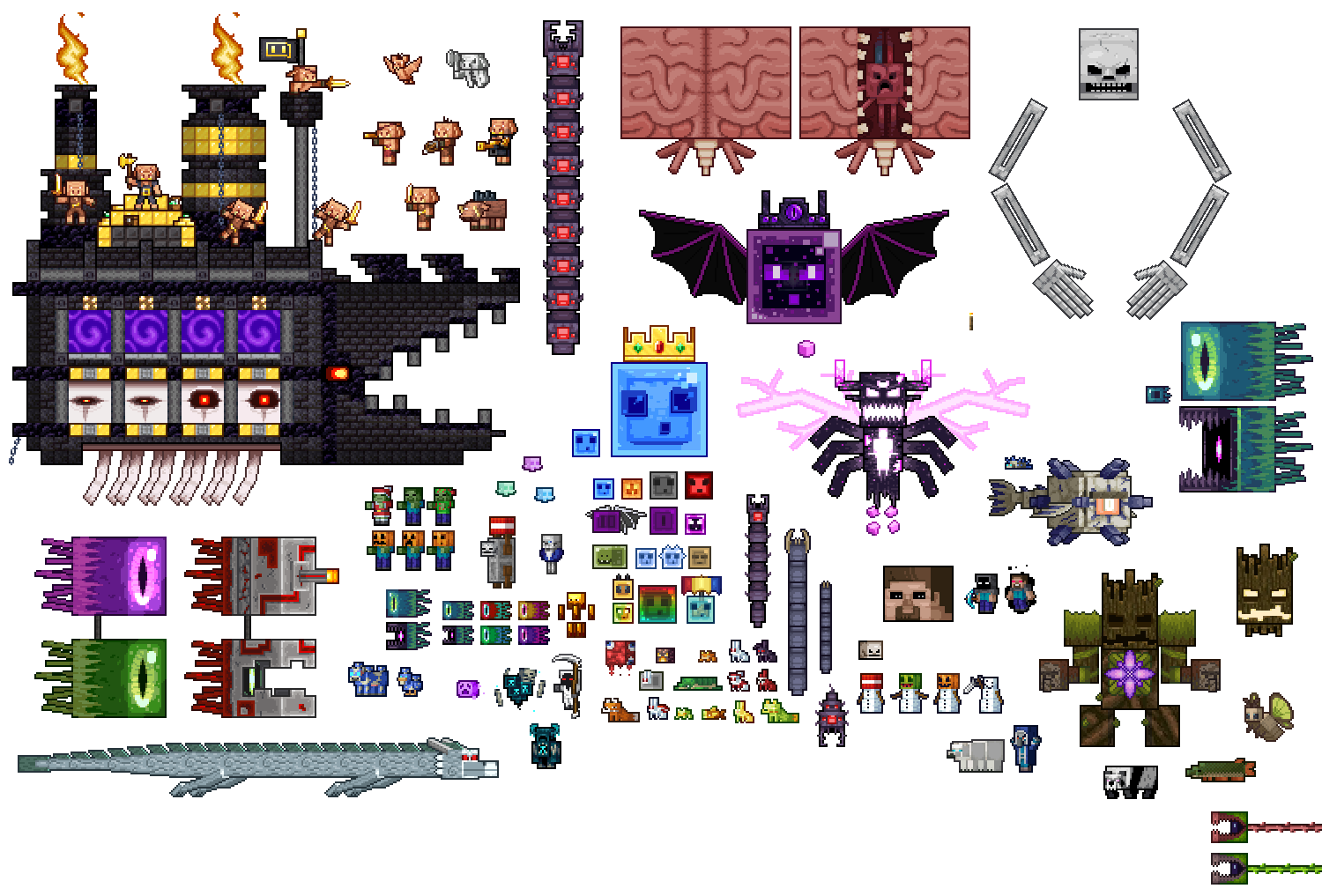 It's in our interest to resprite the brain again to give it a look more fitting of the biome it spawns in and its enemies. Now, I'm aware there will be people who prefer the original designs over these new unique ones. And we have just the thing for them: The Faithful Bosses add-on!

This pack will contain the newest sprites before their design was entirely overhauled. It also includes their master mode pets and trophies.
We don't plan on updating this pack to improve the sprites.
If you wanna test these cool new features you can subscribe to the Beta Texture Pack.

Aight that's all. See you next time. 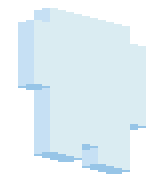 The Lamb said:
We already have an illager redesign, and this one doesn't use the new humanoid base.

I made an animation of me.

I ran out of funny introductions so I'll just say
yo
Once again it's time to show you our progress with the pack.

First of all, I want to say that these past weeks we've been very productive. I've been adding a LOT of tiles and walls, and Lamb's been adding quite a lot of entities. Because of this, it has become kinda hard to track our progress, which is why Lamb made some Excel magic and now we have a count of everything we've made so far!

God bless Lamb for his knowledge of Excel.
Now, I did say we made a lot these past weeks, so here are a few spoilers:

YEAH, THE MECHS GOT RESPRITED AND NOW THEY'RE EVEN COOLER
They also have new names because I can't control myself. I have to change all bosses' names 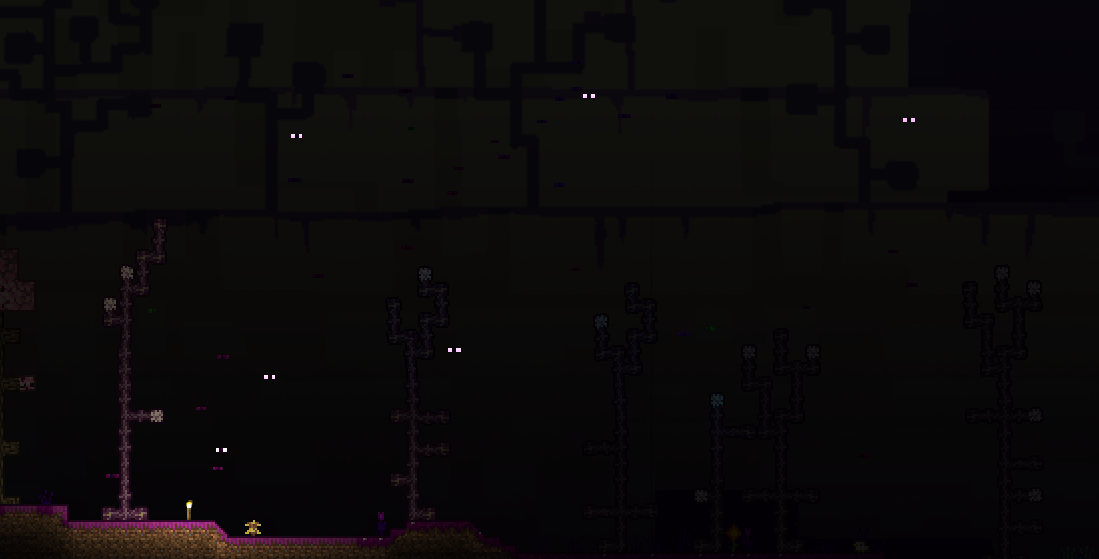 We replaced lightning bugs with Eyeflies, so now you can feel watched everywhere you go 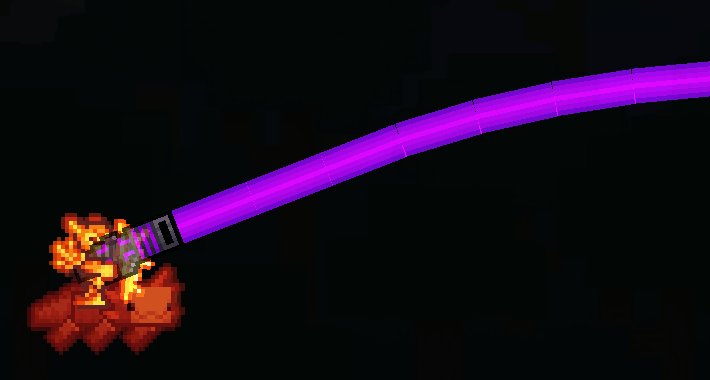 Since the End doesn't have any rainbows, the Rainbow Gun was replaced with the End Aurora Gun
IF ANY OF YOU SAY IT'S LEAN I SWEAR TO GOD

Yes, your eyes are not deceiving you. We did in fact add a portal block. It's a Terrarian tradition to create nether portals in Terraria, so I thought it'd be a good idea to have actual portal blocks AND walls in our pack
As per usual, a compilation of all new and resprited entities so far: 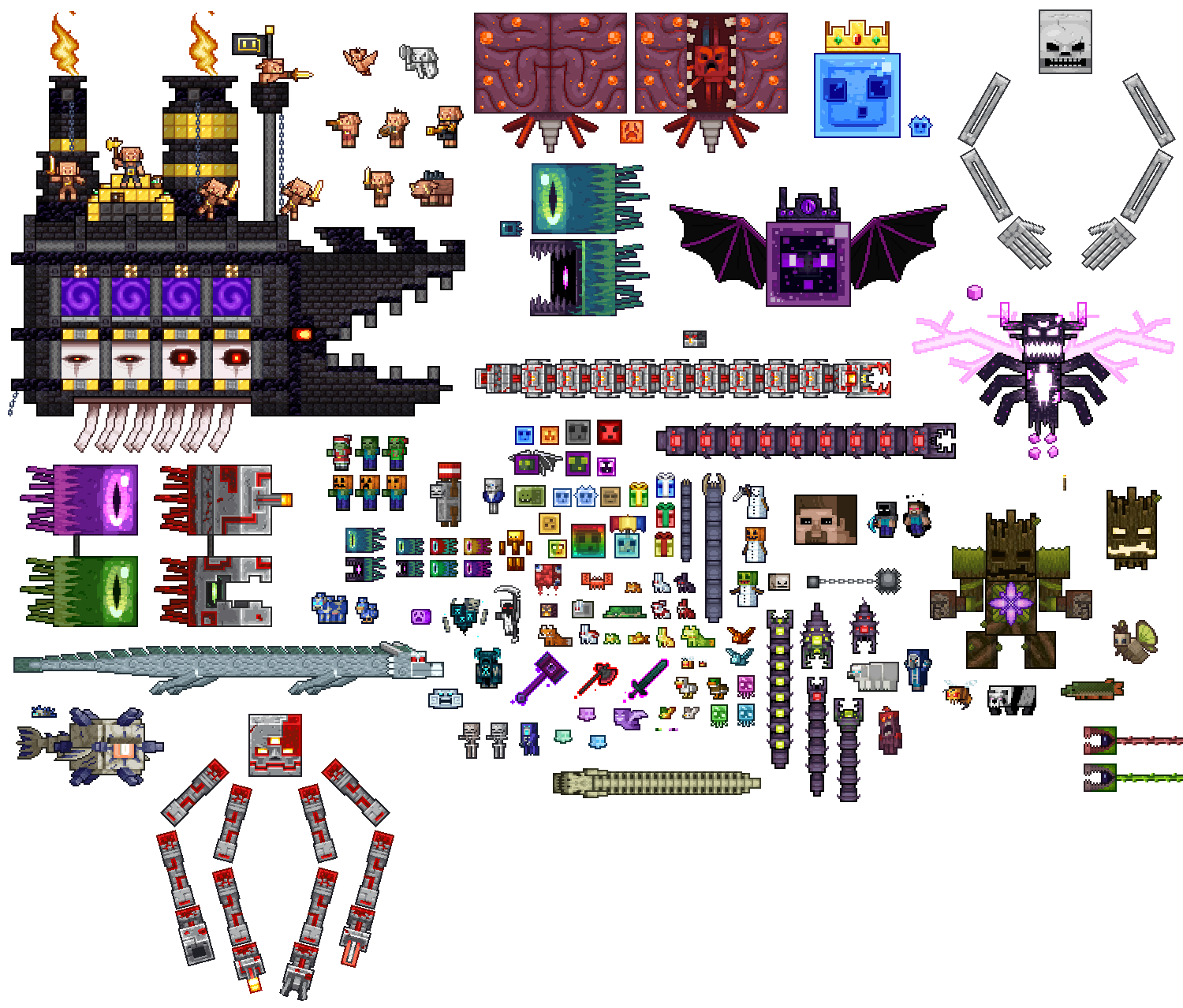 Lore is doing really good as well. We now have ideas for the Solar Eclipse, the Frost Moon, and the Pumpkin Moon. We've also expanded the lore of the Old One's Army a bit. Maybe it won't take us as much time to add them as I'd previously thought? I certainly hope so.

That's it for this month. Please take care and see ya next time.

Yes. I will now end every post with a meme.​ 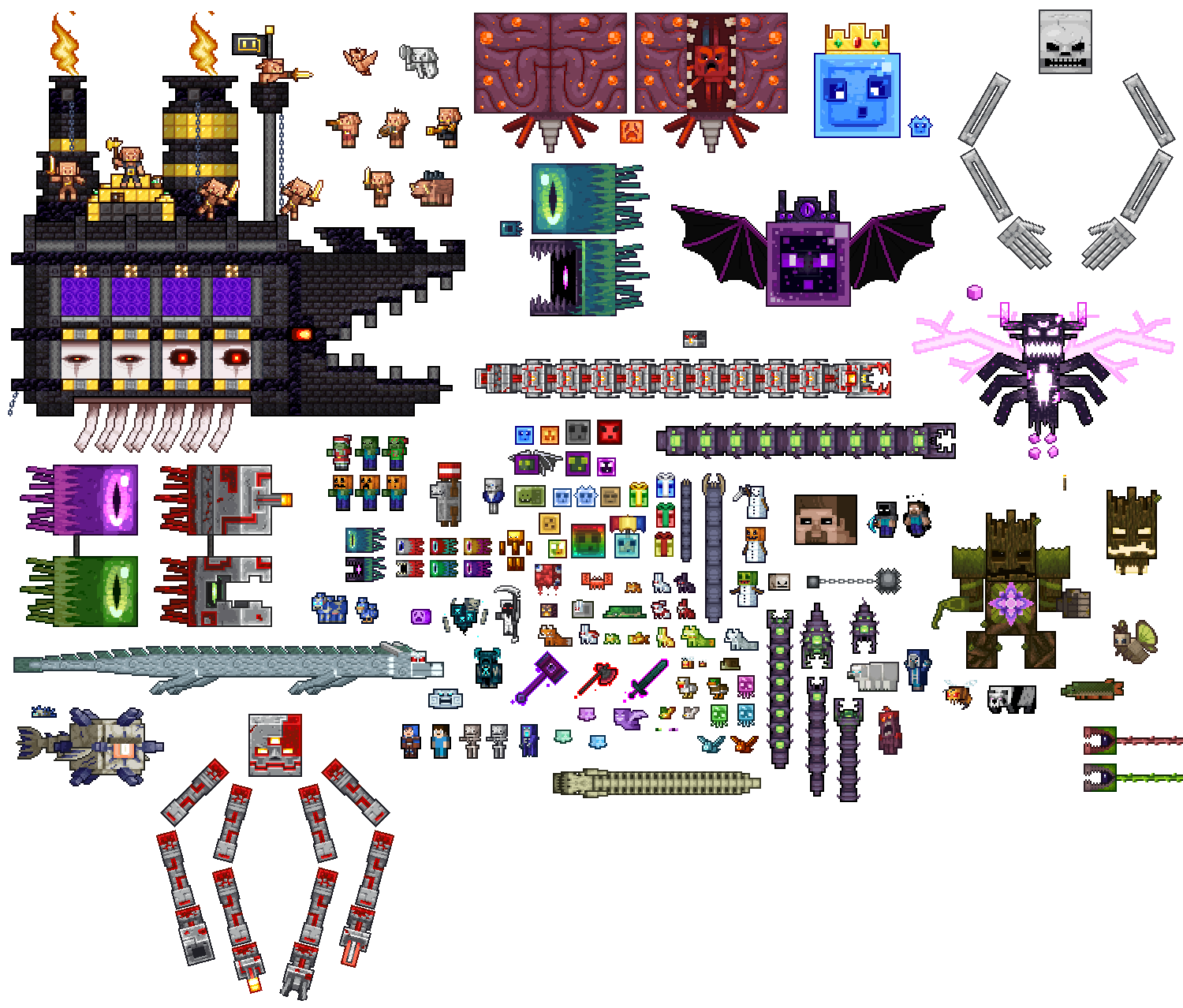