It's my first mod and my English is very bad.

I did not like that in a Terraria, monsters do not give anything (only useless money and loot for crafting) and I love RPG system in games, so I decided to make this mod.
For example, in a Terraria has a huge number of monsters, but if you do not need their loot, you can safely skip them.
I also hate restrictions in games, so I have only one thing in fashion: the size of a sword. Everything except this you can accumulate to the limit of the game itself.

This mod add not so much.

The essence of the mod is this: the more you kill, the stronger you are.

In the mod itself there are 3 main items (the rest are trifles), this is an amulet, a sword and a contract.
You create a new character, he is given an amulet and a sword.

You put on an amulet and all your murders begin to accumulate, all the information is there when you hover over it.
When the right amount of kills accumulates, the amulet amplifies and gives certain bonuses. But at the same time, 20 percent is added to the required number of killings.
The amulet can be improved using it in your hand, for this you need 1000 kills * level of the amulet. With an increase in the level of the amulet, each improvement will give more, as well as those 20% will be reduced (25% - 5 * lvl amulet).

The sword is strengthened with its use, initially it is very small and slow, but it grows with every stroke, accelerates with every swing and accumulates damage with kills.

The contract is an additional improvement for the amulet. He has his own list of improvements, the required number of kills does not increase there. To change the type of bonus, use it in your hands. If you started to save something, then do not change the bonus and do not lay out a contract, otherwise all kills will be reset.

There are several more items in fashion. for example, spheres.
They are bought from a merchant for 50 gold coins and from them other spheres are crafted that give a permanent bonus (if you wear amulet).
These bonuses can be disabled, just use the sphere again.

Now about which mobs are considered.
Everything is considered, except for: city NPC's and friendly creatures from the statue.

And if you use lava sphere, don't swim in lava without amulet.

The mod gives a lot of bonuses, so I decided to significantly reduce the character's invulnerability time (it can be increased, but it will be expensive).

If you want to suggest something or report a bug, contact me on Discord: Kenflesh#3090 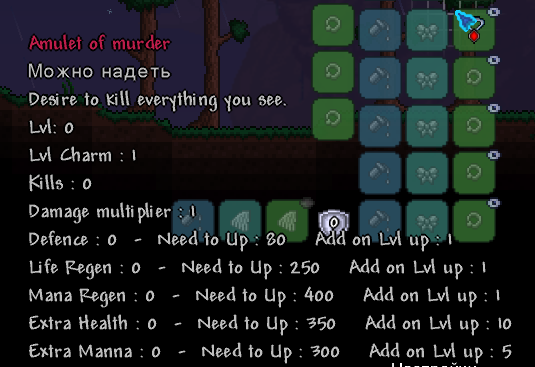