I've designed (what I think is) a pretty good AFK hallowed cavern mob farm. I haven't found any other farms that can really compare to it online, either in these forums or on youtube, so I thought I'd share it here. I'd also like to get some feedback to make it even better! This farm isn't super polished/finished (a lot of the hammered blocks don't need to be there for example), so if I ever get around to polishing the farm, I might update this post or make a new one. Here's a basic screenshot of the farm: 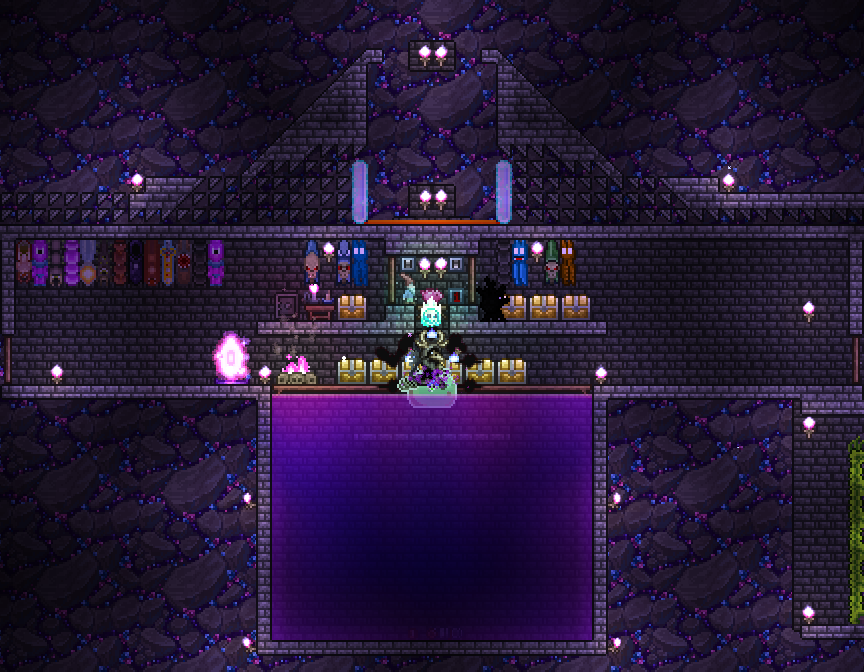 The farm starts as a normal pyramid farm, with roughly a 100x200 rectangle cut out around the farm to prevent mob spawns. At the bottom of the area is lava to prevent all spawns in the bottom portion to save from having to put walls all around down there. I'm assuming that the people reading this know the basics about a mob farm, but I'd be fine with making a more in-depth tutorial (and possibly a youtube tutorial) if people are interested in it.

The first unique feature of this farm is that it uses hoiks to shuttle the mobs all the way from the spawn areas to the center lava pit. It has actuators activate and de-activate the two rows of blocks above the base line of bricks all along the length of the farm. I've had some trouble with a few mobs falling through the blocks to the afk area due to the hoik (mainly skeletons and mother slimes), so the variations of hammered block were just tests to see if anything helped with that. Nothing ended up helping it, but a few minions can clean up any mobs that fall through. You definitely don't need that many hammered blocks inside the pyramid, I'm just not a hoik expert so I went overboard. I've been wanting to test getting rid of the pyramid altogether and replacing it with just a hoik wall on each side instead (a wall lined with hammered platforms), but I haven't tested it yet. Also, the bubble blocks aren't necessary and can be replaced with more hammered blocks; that was just another (unsuccessful) attempt to stop the mobs from hoiking down.

Besides the hoik track (which is connected to the 1 second timer), the other two switches are just quality of life changes. One actuates some divider walls inside the farm to make it easier to work on without being swarmed, and the other toggles the peace and water candles on the workbench. Also unneeded is the full pool of water beneath you: I've used it for my cavern fishing, but you don't need the full thing just for the afk farm to work. All you need is to have a small pool for you to bounce in, which I'll get to later.

Here's a picture of the same area of the farm with wiring enabled, to show off the simple wiring for the hoik and the other switches: 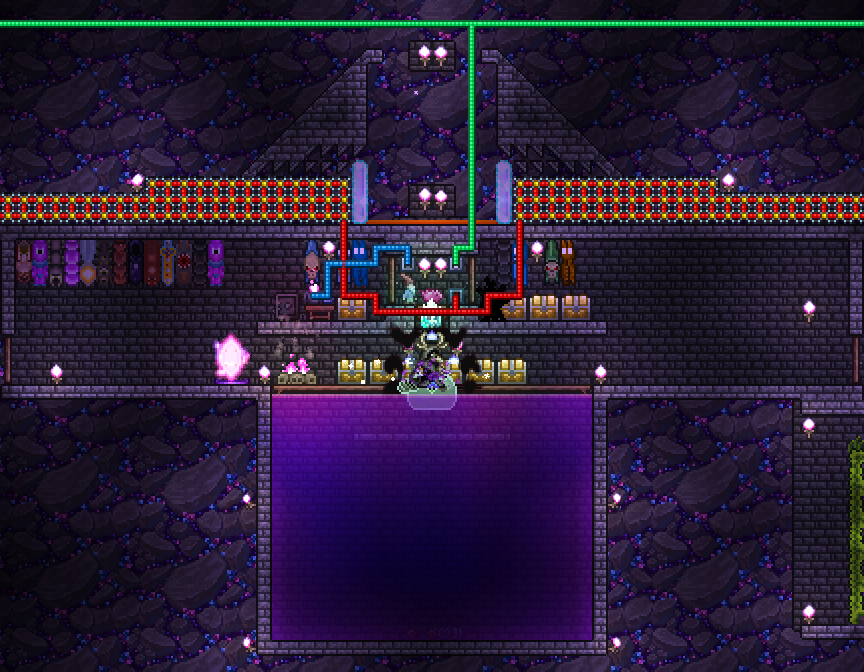 Now that I've covered the basics of the farm, I'll go over the general issues with afk rod of discord farms and how this farm overcomes them.
1. Hallowed Mimics (and regular mimics as well): You may think that mimics would cause a big problem for this farm, but they aren't a problem at all. Hallowed and regular mimics both get hoiked to the lava pit in the center and eventually die to the lava. However, the hallowed mimcs don't wake up and aggro on you. They just sit in the lava until they die, and you are able to get their loot. That is one of the nice features of this farm design. One caveat is that jumping up and touching the blocks at the top of the afk area there will trigger the hallowed mimics, but just standing on the top platform (if you want to afk for other drops besides the Rod of Discord) will not activate them.

2. Chaos Elementals (spawning and killing): The solution for the spawning requirements of chaos elementals in this farm is pretty nice: you just sit in water on either of the slime mounts to bob up and down, like shown in the screenshot. The 6-8 walls behind you are also broken so that they are able to spawn. For killing them, the lava can do most of the job. For if/when they teleport down next to you, I use the bats from the sanguine staff to kill them. I've tried using other early hardmode summons, but they bug out when you are bobbing in the water; spiders will happily sit there and watch you die, even if there aren't blocks around you and there are walls for them to sit on.

3. Enchanted Swords: These enemies have been the most difficult aspect of the farm for me, and are the part that I am most hoping to get feedback on. Currently, the hope is that you have enough minion slots/damage to be able to kill them efficiently with the sanguine staff bats. This won't always work for all situations, but it has been good enough for me to afk for a few hours at a time. Another problem is that the bats can't fly too far out to hit the swords; if they do, on their return flight, they will fly too high and hit any hallowed mimics sitting in the lava, activating them and leading to a swift death. That is why I have the walls set up on the sides of the enclosure, to make sure the bat's flying radius isn't too large. If anyone has any suggestions on how to deal with them better, please let me know (but keep in mind, I've designed this farm for early hardmode, so I won't be using temple traps for it).

4. Collecting the loot: You've probably noticed that the afk spot is too far away from the kill chamber to get the drops, which is correct. For collecting the loot from this farm, you need to use a treasure magnet, which you can get from shadow chests in hell or from obsidian lockboxes found in hellstone crates. This gets your pickup range far enough to reach the kill chamber in the pyramid, as well as most of the places any chaos elementals will die.

I haven't done any rigorous tests on the drop rates, but in the several hours of using this farm, I've gotten 3 Rods of Discords, multiple stacks of souls of light, more than enough mimic/hallowed mimic drops, and about 100 platinum after selling the excess items. This is also a pretty good source of long-lasting Exquisitely Stuffed food in the form of apple pie. I've gotten 20-40 so far (I've been using them throughout this playthrough and haven't kept an exact tally).

This is my first post on the terraira forums page, so if you have any suggestions to make my post better, please let me know. I'd be happy to provide more information/pictures as well if anyone wants them, I just didn't want the initial post to be too big. I've thought about making a guide/tutorial on youtube, but I haven't ever made/edited videos before, so I thought I would at least post it here and get some feedback first. I also made a very simple dungeon farm that I'll probably make a similar post about later. Anyways, I hope this farm design/guide helps some people out.

Edit: Here are some more screenshots of the farm.

You would be able to collect pretty much all the items on the screen with the treasure magnet, I just didn't have mine on at the time. 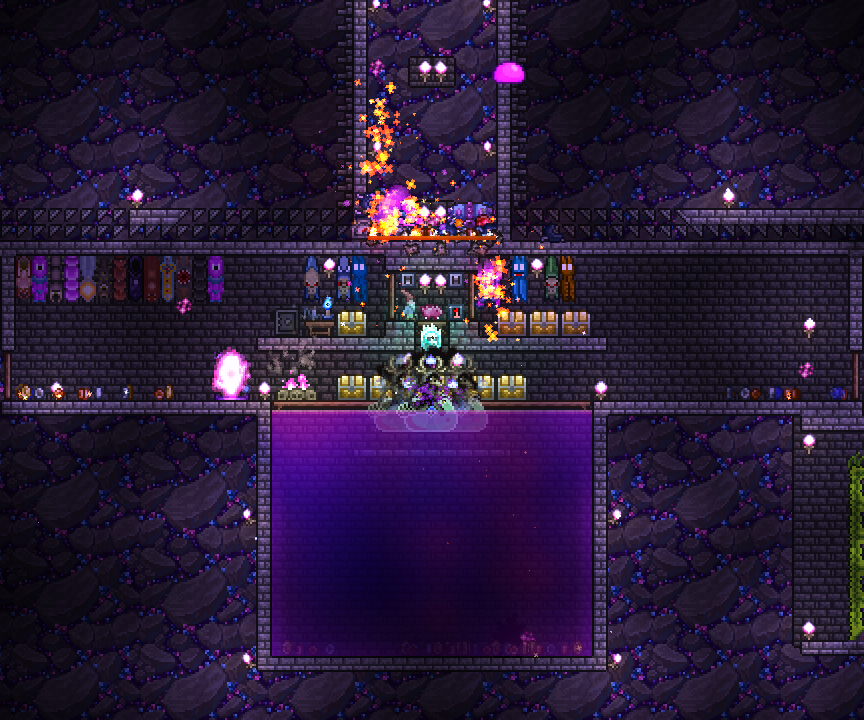 Maybe you could blockswap the grey brick at the bottom of the pool (not below your AFK spot) to dart traps and have those fire upwards. Even a single bit of knockback goes a long way with Enchanted Sword enemies.

Planthair01 said:
Maybe you could blockswap the grey brick at the bottom of the pool (not below your AFK spot) to dart traps and have those fire upwards. Even a single bit of knockback goes a long way with Enchanted Sword enemies.
Click to expand...

That's a good suggestion. I didn't know you could hammer dart traps to fire upwards. All the same, I'm afraid that 1. it won't fire consistently enough to stop them from reaching you, and 2. if it does hit them, it will just knock them above the blocks and then they will just come at you from above.

You could maybe make a circle of lava around you aswell (for enchant sword) and use ROD or bubble blocks to get out.

Peanut sauce said:
You could maybe make a circle of lava around you aswell (for enchant sword) and use ROD or bubble blocks to get out.
Click to expand...

Enchanted swords aren't affected by lava, they fly right through it without taking damage.

Also quick question: should I move this guide to general terraria guides, rather than just PC guides? Is it even possible to do so?
P