Some friends of mine and I have checked through changelog, Builder's workshop and source code and found a number of new wiring items. The process was manual so it's possible that we missed something. The wiki has been updating but have not yet reached many we have studied, so I decide to post whatever we know here.

Below is a capture of all new wiring items. Some music boxes are out of screen because there are too many of them. Themed furnitures are omitted. Golf Cup is not added because we don't know how the golf system work yet.

i think the new cracked dungeon brick is worth mentioning
- can be crafted from dungeon brick in a heavy work bench, yields 2 cracked dungeon brick from 1 regular brick.
- when walked/jumped on the top by the player, starts falling and will cascade all cracked bricks below it and has a chance of doing so to bricks horizontally adjacent to it.
- it took me an average of 3 jumps to start a cascade
- attempting to mine or grapple it will start a cascade immediately
- the falling projectile can activate teal pressure pads
- enemies do not affect it.
- it will act as a solid block when a chest is placed on top. Walking on these blocks do not cause the cascading effect on adjacent ones.

this block could be used for adventure maps in parkour, traps, and as a way of controlling player progression.
A vertical wall with the top of it covered by solid blocks can only be cascaded by grappling or mining it.

putianyi888 said:
Doors can serve as signal sources. Didn't know it on 1.3.
Click to expand...

does this mean that we can't insta-kill destroyer now, and that the DPS thread needs revision?

yes, i am interested too. How do you use a door as signal source ?

soz im not really contributing anything wish i was more talented

Golf balls do affect Teal Pressure Pads, this may be useful
2

Also, are npc based batteries viable anymore? I doubt they are, given that dart + teal pp is super clean in comparison.

Also, are npc based batteries viable anymore? I doubt they are, given that dart + teal pp is super clean in comparison.
Click to expand...

22144418 said:
From what I see, I don't think it's possible to stack geysers, which is a real shame; they would be useful otherwise.
Click to expand...

Geysers are actually kind of autostacking. If there isn't enough space where their "crater(?)" is, they look further untill they find free space to spawn their flame.

These three spawn their flamses on same level, above the top stone block row: 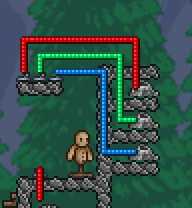 These spawn flames below bottom row: 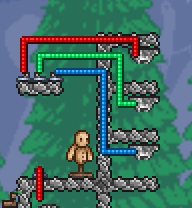 You can also "unstack" them tho there's no good reason for it, by making them float in air by removing teleporters underneath: 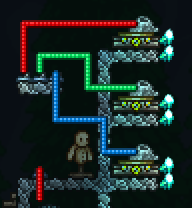 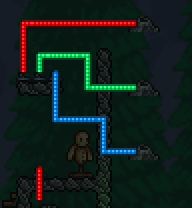 Iirc I think there's need to stack more than three, because their hitbox lingers for a while even after gfx are seemingly gone, but haven't played with them much.
P.S. Ignore dummy and bottom switch, they're unrelated, I just built this demo above them.
P

putianyi888 said:
Doors can serve as signal sources. Didn't know it on 1.3.
Click to expand...

Can you recheck this? Tried ingame and regular wooden doors don't seem to activate wires neither from the hinge nor from opened state tiles. Even tested if they maybe only activated from town npc interactions but nothing. Suppose it could also be when bloodmoon/dungeon zombies break a door, but slightly more annoying to test.

Yay, double posting, but it's regarding a different issue and post, so hopefully allowed.
B

If your referring to the new Boulder trap then yes, place them on a solid block then use block swap on the blocks to swap them to platforms, voilà.

how exactly is the bast statue affected by signals? I thought it was just another passive buff item?
2

Bast statues can be turned on or off, which is (if my mingling around proves to be good enough) impossible to do without wiring. Not sure why you would do this, but it's definitely a thing.

22144418 said:
Bast statues can be turned on or off, which is (if my mingling around proves to be good enough) impossible to do without wiring. Not sure why you would do this, but it's definitely a thing.
Click to expand...