please help me fix the no sound thing i have reinstalled/repaired directx xna framework everything like that deleted the config folder even the whole terraria folder in doccuments,reinstalled and still nothing switched from headphones to speakers all kinds of stuff please help deleted the X3DAudio files win windows system32 and sywow64 now my game doesnt launch replaced them and it still doesnt launch

....You deleted the system32 files?
You really shouldn't have done that.

Otherwise I can't make up what you mean.

Windows unsurprisingly depends on the stuff that's in the Windows folder. System32 and Syswow64 have lots of critical stuff in them that you shouldn't touch -ever-, unless you know -exactly- what you're doing.

If you really just randomly deleted stuff from there, try to repair Windows. After that, reinstall the xna/.net stuff that Terraria needs.
S

no i just deleted the X3DAudio dlls from system32 and syswow64

Which is something you should not do. Don't delete anything out of your Windows folder. It will cause problems if you do.
S

Gotcha! said:
Which is something you should not do. Don't delete anything out of your Windows folder. It will cause problems if you do.
Click to expand...

@svetoslav123 I assume this is just a Terraria issue? If all sound wasn't working then surely you would've gone to the Microsoft forums or something, so I'll assume in that case that only terraria is not getting sound.
Since this is a Terraria problem, it's not necessary to remove any system files since they are in no way related to your game. Deleting them will only cause problems. 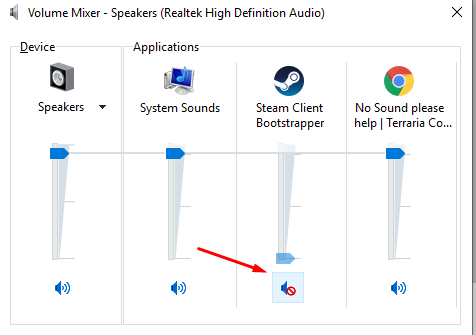 If the sound is full, then make sure your in-game sounds are also at 100%
S

of couse i have made sure... plus yes terraria does use system files thats why they are there why whoud there be dlls if not aspecually sound dlls

Staff member
Administrator
So something I want to clarify in this thread, is yes, 99% of the files in System32 and SysWow64 you should not touch without proper guidance. One of the DLL's I instructed the user to replace was X3DAudio1_7, which specifically is a component of sound in DirectX. This is a component that is not categorized as crucial for Windows to operate and therefore it is safe to replace.

One more thing I would like to mention is I don't suggest users do anything that I haven't done on my system first. Again, I did the same fix on my machine just now and determined the fix worked with no side effects like permanently losing audio in XNA based games. I'm not so sure that the audio issue is tied to the fix that I had the user do but rather is an additional problem that was discovered after the user could finally launch their game.