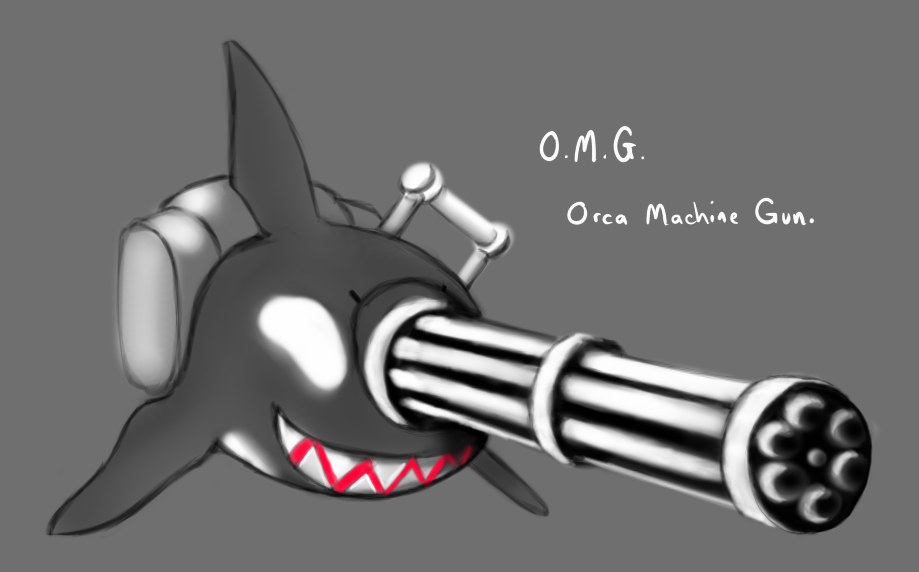 So we are all waiting for the next patch with hopes that the S.D.M.G will finally be a regular weapon, and I thought perhaps we could push it one step further.

I have no idea what sort of stats would be best for this weapon, so I'll just go over the concept.

Here we have a rapid fire weapon similar to the chaingun, spraying bullets at a high rate, but the special feature of the O.M.G. that sets it apart from other ranged weapons is the large muzzle flare that it shoots in tandem with the bullets. This allows it to cause more damage when up close to targets by combining muzzle flare damage with the bullets it fires. Think of it as a chaingun with a small flamethrower effect that doesn't use gel.

Another feature is the animated barrel that adds character to the gun.

This weapon should be very high fire rate, high damage-per-minute, and very hungry for ammo. This late in the game, a player should hopefully be able to afford the huge piles of ammo that this gun will consume. This isn't a gun design for efficiency or subtlety, but for gross display of power. It has a 50% chance to consume MORE ammo, but it's destructive potential should make it a sublime choice for moon events and boss fights if you can feed it.

Here's a sprite concept. The native particle effects in Terraria could do a much more dramatic muzzle flare than this example.

Here's an example with no muzzle flare.

This big fat chain gun can't wait to eat up all your ammunition and blow away all the competition.

50% to eat up more ammo? No thanks, I don't want to wield a gun which consumes extra ammo at 50% - lower it to something like 20% or 15% please. Plus, this is tiny compared to the other end-game guns such as the Chain Gun and so on!

No support until these problems are fixed (except from the last one which isn't vital for my support, but still something to consider with the last sentence).

Dominus Infernus said:
50% to eat up more ammo? No thanks, I don't want to wield a gun which consumes extra ammo at 50% - lower it to something like 20% or 15% please. Plus, this is tiny compared to the other end-game guns such as the Chain Gun and so on!

No support until these problems are fixed (except from the last one which isn't vital for my support, but still something to consider with the last sentence).
Click to expand...

If it has a massive drawback, then perhaps it could have massive damage values. That is of course what I'm implying. The ammo conservation potion, ammo box, and shroomite breastplate each offer 20% chances each to not consume ammo, and a weapon that actually eats more ammo is so far unseen. Thought I'd venture into new territory with that concept.

I also have a size comparison sprite that is poorly done, but shows a rough idea of how big I would like the weapon to be.

So it's actually fairly massive in this example.

Burnscars said:
If it has a massive drawback, then perhaps it could have massive damage values. That is of course what I'm implying. I also have a size comparison sprite that is poorly done, but shows a rough idea of how big I would like the weapon to be.

So it's actually fairly massive in this example.
Click to expand...

Thanks for considering my points and correcting me in a good way. 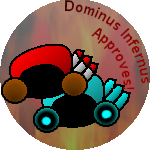 *looks at title
*facepalm
but after reading the suggestion, i like it. and the sprites are really good too.

OMG, what a nice abbreviation mate!

I also really like the style and everything, I approve.

THIS IS AMAZING. COMPLETE AND UTTER SUPPORT, MORE THEN I HAVE EVER SUPPORTED A SUGGESTION BEFORE.

OMG, This idea is awesome! Support!

this weapon is way too big for terraria. terraria uses four-by-four pixel units of color, so i have resized it to show how big it would actually be in-game.

suport tho, it seems pretty cool, although I would nerf that chance to eat up more ammo a LOT, eliminate it altogether, or change it into a chance to not use ammo if you want to get a lot more support.

Other than that, Jolly Good Show!

I am not sure about it being an upgrade of the SDMG, I thought it would be a side grade, trading ammo consumption and accuracy for damage potential.

Either way this is a cool idea.

I support the concept, but that doesn't mean I understand why exactly we're shoving chain guns into whales, sharks, and dolphins.

You get my support.
If it branched off where Mega Shark is, SDMG will be the less ammo use upgrade and 35 dmg (? methinks) to OMG being a minimal Melee range (muzzle flash) ammo plastering power house (40 damage, Mega shark included in recipe, assume 1.3 material use).
You'd get more DPS out of OMG for a while with all the reduced chance of ammo use, but SDMG would pull off in a longer for the fact it comes with a reduced ammo use to begin with. Pretty much, short battles- OMG wins, long arduous battles- SDMG wins.

I think you just went against the flow of Terraria, and I like that. You get points for thinking outside the box, as well as giant fricken miniguns. I'm thinking that maybe this one could emit a loud noise or something, just for the Schwarzenegger gusto.

Seems nice, although, I suggest that instead of making it consume more ammunition, just give it a cooldown time, so you can't constantly spam the hell out of it. Like the Mana Sickness debuff, I suggest that if this weapon is fired for longer than 10 seconds straight, it gives you a 5-second damage debuff that decreases damage by 25% and decreases as time goes on.
Feel free to edit my suggestion, I'd like it if you at least considered this idea.

I can't explain how muchI support this in words, I think. And the name! YES.

I see there has been some interest in my little idea. It would be nice to see something in Terraria that I could show my friends. "Look! They put my idea in a famous game!"

I would die happy with a boner.

Nice sprite, idea, and for thinking outside the box. I don't know many people that would make it use MORE ammo instead of less. I myself probably wouldn't.

I hope to see this in the game. I would totally use it.

This is an awesome idea