A Builder's Resource​
Introduction
Each swatch shows how the various paints look on a particular block and its corresponding wall (where applicable; some are block-only or wall-only). On the left is a 4×4 chunk of the regular block, and on the right is a 4×2 chunk of the same block actuated. 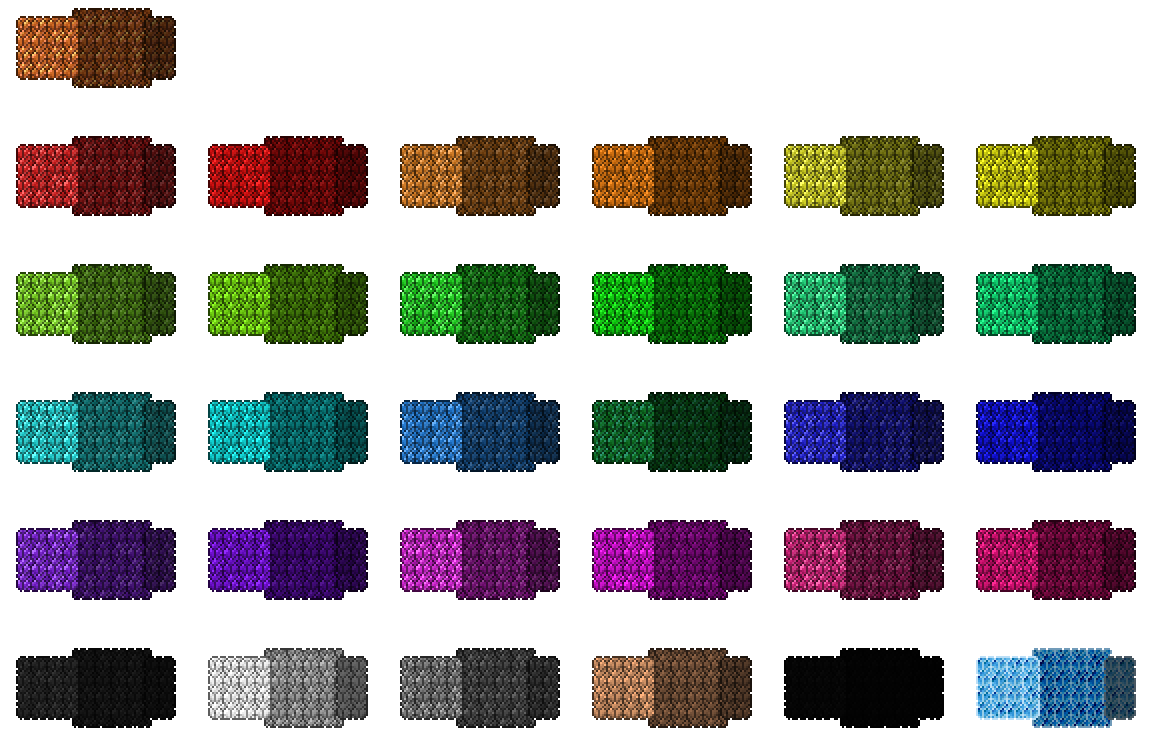 I think the first time I tried Terraria's paints was when using Pumpkin Wall to simulate curtains. To see how it looked (and more importantly, to help me choose "curtain" colours), I made a swatch much like the ones in this post. I got the idea from the official Terraria wiki, which has this swatch of painted wood; you'll notice I used the same 4×4 size and layout (with, eventually, actuated blocks added).

Once I was done with the Pumpkin swatch, I dismantled it, but then later built another one for Candy Cane Blocks, because I wanted a diagonally striped material for building a shipwreck, and since I was checking it out anyway I figured I'd do like I did with the Pumpkin Wall, and experiment with all the paint colours.

At this point, I knew I wanted to (eventually) make a lot more swatches to showcase the looks of different materials. But I was (am) something of a building purist, making everything in-game, and building and rebuilding swatches was an off-putting amount of work. Actually, I was thinking that the block replacement feature that 1.3.6 is bringing might be just what I needed; but it's a pity that it apparently won't keep paint in place.

I think it was seeing someone use painted Grinch Finger Wallpaper in a build that finally prompted me to do this for real. I'd always considered that a rather ugly wall, but when painted blue it looked very nice. So I finally installed TEdit and started using it to make swatches, and flying around them in-game to get the screenshots. (I have background and entities turned off in the screenshot tool, to keep distractions out. But you may notice at least one swatch where the top of a Strange Plant still managed to sneak into frame…)

The results were fascinating. Not only did I find that Grinch Finger is even more striking with negative paint, but I found a bunch of other colour combinations that started me thinking how and where I could use them. (I also found out other things, like how painted grass blocks have some odd interactions with the long grass and other plants that spontaneously grow on them.) So I decided that, when I had a bit of time, I'd share the swatches here.

After steadily expanding the set, I now have every available block and wall here (including the unobtainable ones, for TEdit-using builders). As for other paintable items… who knows? Maybe that'll be in a different thread, or someone else's project.
Future Changes (Maybe)

I have no clue what this means but I assume it's professional.

swatch, n. A small sample (as of fabric or paint) intended to demonstrate the look of a larger piece.

The idea is that builders can come here and see how different paints look on the various blocks and walls without having to do all the building and painting themselves. They can also browse through them to get ideas (for instance, if not for this I never would've thought to put negative paint on Ice Floe Wallpaper, but it actually looks really cool). And maybe even play around with the pictures in an image editor to test out colour matching between different blocks, or things like that.

Professional it ain't, but I hope it's useful to somebody!
W

You're doing the Moon Lord's work. If you finish a complete paint swatch guide I'd support putting a sticky on all the major discord, subreddits, forums. I'd never found one before.
T

Wow. Just wow.
Also candy cane blocks go in the looted (from enemies and the like) category, according to Terraria gamepedia.

If anyone is waiting on an update to this project, I have... kind of started over. I finally decided that I wanted to also include actuated blocks in the swatches, so every swatch (except the wall-only ones) needs to be remade.

It's happening (and should go fairly quickly, because I've also done a lot of behind-the-scenes work planning out all of the swatches... all 269 of them). But it means there might not be any new ones for a little bit, and also that old image links might break in the near future. Just in case anybody had bookmarked any of them.

This thread is amazing :0

This is amazing! A great resource for builders. It must've taken quite a long time to compile all this.

The swatches are now complete! I may make future changes—I've put a to-do list in the top post for myself, and I'd love to receive any bug reports/corrections—but for now, all 268 swatches are done.

(Yes, 268. I said 269 in my last update, but that included ice blocks created by the Ice Rod, because I wanted to see if it was even possible to screenshot them. Turns out, it's not; you can place them in TEdit, but then they're removed when saving the world.)

Some interesting things I found out, and observations I made, in the course of this project:

...Bless you. I've wanted something like this for so long. You even got the actuated blocks - I could cry. Bookmarking this page and sending you my most grateful of thoughts. Your hard work here is magic.

I have been making great use of this over the past... day. Some observations of my own:

-Negative paint can achieve really brilliant results, but it's sometimes difficult to make the white outline look natural. Using actuated negative-painted blocks usually saves the day here. Favorite all-purpose is marble right now.
-White or yellow ebonwood makes great textured columns.
-Grey sunplate is amazing for stone fences.
-I thought Bubblegum block was hard to use, but painted grey, it looks like another stone texture. White matches very well with cloud. Painted red, it looks like brick that the Crimson is growing on - same for Corruption and purple. (Dark) blue makes it look like brick in a glowing mushroom biome. It's probably the best material for making a structure look dilapidated.
-(Not something I learned here, but placing painted confetti blocks over a painted wall gives you sparkling lights over whatever pattern background you want.)
-Deep Sky Blue paint is weird and tends to push things into a dark green palette - however, this can achieve some duotone results where paints usually only offer a monotone, like if you want a blue-green Arcane Rune Wall or Sunplate Block.
-Shadow paint is silly.
-Negative honeyfall actually passes for a good waterfall block, albeit with a slower animation.
-I have been missing out by not building things with green dungeon brick, asdfgjl.
-Grey-painted purple rain wallpaper makes excellent industrial grates.
-Negative rough granite looks like gold-flecked marble.
-I need to make something with negative blue stained glass immediately. ...But I bet the blue light tint would lessen the effect, so it'd have to be in a white-lit room.

By the way... I'm not sure these count, but you missed thorns and spikes (normal and wooden.) While thorns are just a curiosity, you can actually build with spikes (I personally think they make great vanes and fence toppers), so a possible thought for the future?

Sorry for the bump, but this is really helpful! Hope you get ropes, vines and spikes next.

Does MrP mean switches or not. If he means swatches can someone tell me what that is.

Spazmatism7 said:
Does MrP mean switches or not. If he means swatches can someone tell me what that is.
Click to expand...

I mean swatches. Definition is back near the start of the thread: "A small sample (as of fabric or paint) intended to demonstrate the look of a larger piece."

For anyone waiting on updates, I've got time to get some of it done in the near future. But right now I'm putting all my Terraria time into hoping the Travelling Merchant shows up and sells me the one Christmas painting I don't have yet...

Wow, this is incredibly useful. Thank you so much! Any chance you would be willing to provide a download for all of the image files?

notato8 said:
Wow, this is incredibly useful. Thank you so much! Any chance you would be willing to provide a download for all of the image files?
Click to expand...

If you type this on PC then you could download it from right-clicking images.

I've finally updated the swatches! I actually made the new ones ages ago, but hadn't gotten around to uploading, sorting, and linking them. (Sorry about that.) But I figured I really ought to finish the process before "Journey's End" comes out and probably adds a bunch of new blocks that need swatches!

The people (well, @Laluzi and @computerfan0 anyway) demanded it, so here they are: spikes, vines, thorns, and ropes (including chains and streamers). Also living fire and cobwebs. I've also grouped five of the natural cave walls with the mossy stone blocks that they match. In all, there are 24 new swatches and five removed, for a grand total of 287 swatches.

And because @notato8 asked, I've also put together a zip file with all of the pictures. You can grab it from Google Drive:
I think that covers everything that is, or could be, counted as a "block" or a "wall" rather than "furniture" or a "placeable item". Oh, except maybe wooden beams...

With Journey's End now giving official names to the formerly-unobtainable natural walls, I've gone through and added these names to this post. I may have made mistakes in identifying them, as I don't have all of the walls in my current game yet (and the wiki seems to only have inventory icons, not placed samples), so please do let me know if you see that I've put the wrong name on something.

As for updating this with the new Journey's End blocks… well, I'm actually wondering whether it might not be better to start a new post. With non-desktop platforms (and modded desktop) still on 1.3.5, I imagine that this might be a useful resource for some. And I can't just leave the existing swatches alone, because apparently the odd greenish colour that Deep Sky Blue Paint gives to many blocks was a bug that 1.4 has fixed.