Paid content? Nah. This update will be free, like the rest of 'em As far as new weapons, bosses, etc I can't say but you can see all of the spoilers we've posted so far here: https://forums.terraria.org/index.php?forums/pc-re-logic.85/

Safeman said:
Paid content? Nah. This update will be free, like the rest of 'em As far as new weapons, bosses, etc I can't say but you can see all of the spoilers we've posted so far here: https://forums.terraria.org/index.php?forums/pc-re-logic.85/
Click to expand...

I mean, you deserve money for your wonderful work. I can not play this game for free anymore!

these backgrounds are awesome

It's really nice seeing all these graphical updates from the trees to these really fancy backgrounds, but my only problem with the backgrounds currently is that I feel the new forest's foliage doesn't feel as green as it should be.
Rather than a yellowish green like this 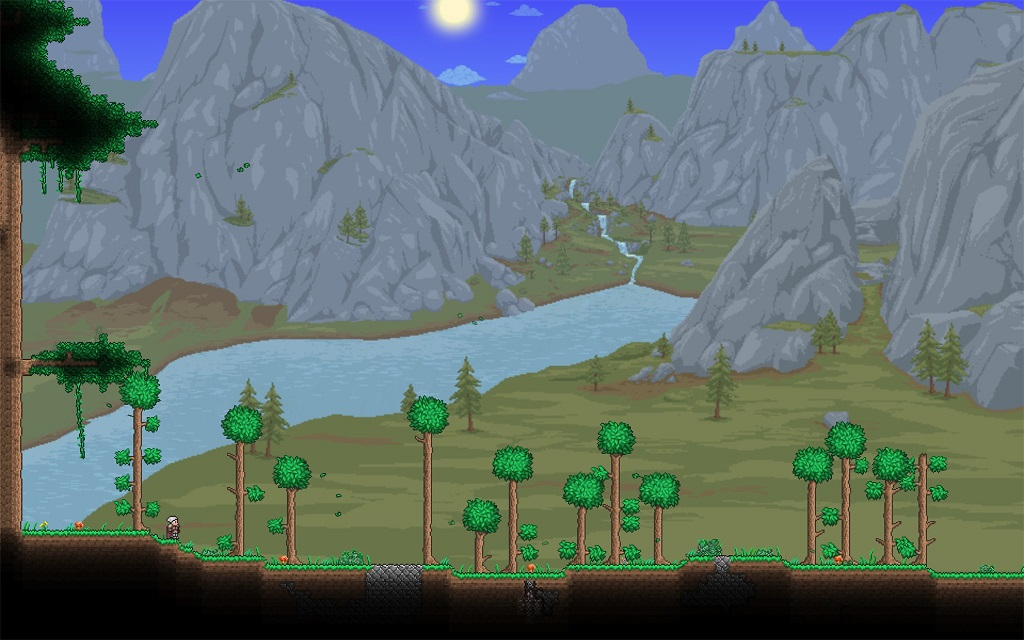 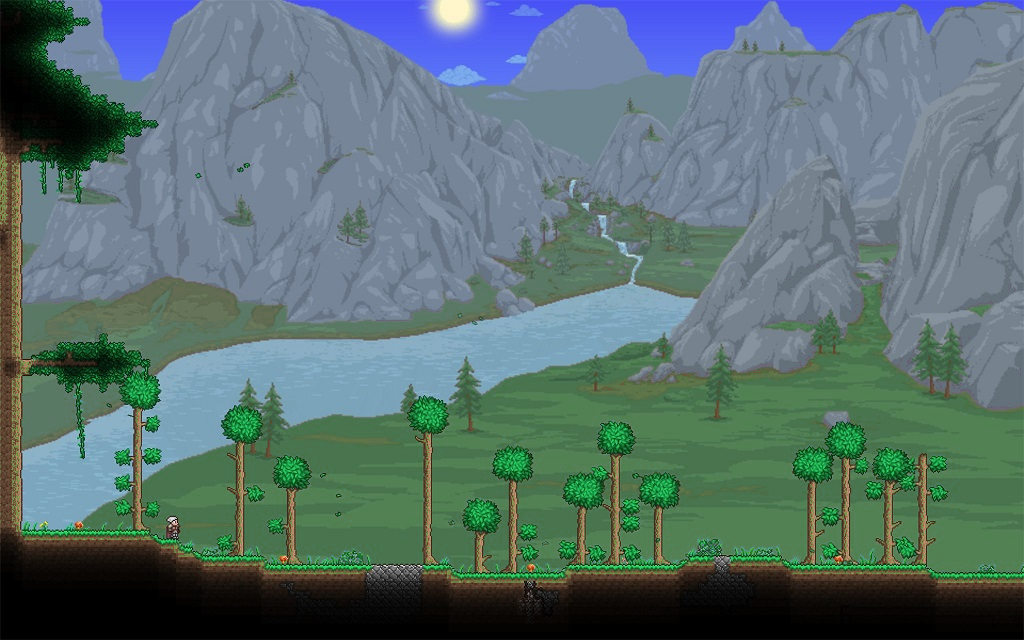 I really like all of them, but I'm not a huge fan with the forest one. I think the art itself is good, but something about it sticks out and looks wrong. Perhaps the colors? It doesn't seem like it fits with the main area and sky honestly.

I don't dislike the Forest mountain background, but it looks a bit bare for a forest. It is very well-detailed and very nice though! If only there was a mountain biome to put it with... (hint hint ).

Mushroom background is suitably dark and ominous! Hallow background looks like a path to the Emerald City, even if it's not a yellow brick road.

Ok, this stuff is really freaking sick! Especially the one with the mountains and river.
I’m amazed!
Great job, team! And a huge kudos to Crowno!
EDIT: My bad. It was more than Crowno who made these backgrounds.
Last edited: Sep 1, 2018

Oh my God! it's beautiful!

I mean, it's just speculation on my behalf, but I believe the 1.3.5 update is pretty close.

One of the things we learned from the cancelling of Terraria: Otherworld is that Re-Logic will no longer release spoilers and tease and, most notabley, hype people up about their new projects, until they can be certain that they can keep up the spoilers and the hype until the release of said projects.
It wouldn't be a stretch to apply this logic to Terraria's future updates, in this case, 1.3.6. After all it would be counterproductive to hype people up about the update if they have no idea if they can keep up with the spoilers and the hype until release.

And we can see this happen in action : the development of 1.3.6 began quite a moment before Terraria: Otherworld was officially cancelled, and probably internally too, and we got quite early spoilers of 1.3.6 as well ; I assume they were before Re-Logic had the wake up call of the dangers of hype with Terraria: Otherworld.
Then, the spoilers kind of slowed down, a lot, I assume it is because Re-Logic decided to not hype people up anymore than they already are about 1.3.6, until they can be certain that they can keep up with the spoilers and the hype until release.
Then, quite recently, we see an increase of spoilers, quite a drastic one at that. And so it leads me to believe that 1.3.6's release is close enough to Re-Logic's point of view that they can keep up the spoilers, and the hype, until release.

That does not necessarily mean that they have a release date set in stone, but I do believe that they know that they are getting quite close indeed to the eventual release of 1.3.6.

So I'm hyped beyond reason !

I'll be honest, I'm actually not too sure how I feel about a couple of these. The mushroom and forest ones look almost 2D- I can't really explain it, the perspective is a bit harsh. The mushroom especially I really don't think I like as much as the old one.

Obviously I'll need to observe how they behave in parallax and animation before reaching final conclusions, though. Will the old backgrounds be completely removed? I know I'll be sad to see the old floating island forest background go.

You guys are really doing a great job for Terraria!
1) Reworking Console and Mobile for faster update arrivals
2) Actually reworking the backgrounds for biomes
Keep the good work going!
(I really love the new looks! I'm guessing the Corruption, Crimson, Desert, and Ocean biomes will have new looks right after this one)

All backgrounds are SO excellent! But my favourite is the forest's because of those realistic mountains and short trees.

crowno best spriter, mushroom looks great but sadly i don't like the new forest one that much tho it's a bit worse than the old one

LOOKS SO AMAZING and BEAUTIFUL!
I Hope they add that backround on 1.3 Mobile soon.

Please don't smite but I feel as the mushroom one is quite 2 dimensional and cartoonish and the forest one looks dead. But I'm glad to see all biomes getting new backgrounds!

Personally, the mountains background look weird. The grass doesn't match the background 's grass in colour and the mountains are just straight up grey, whereas most mountains still have grass on them. If there's going to be more stone mountains in the future that are added to world generation, I'd say it would fit wonderfully, but until then, I'd say change the colours. Great job on the backgrounds, artists! Always keep up the good work!
Last edited: Aug 28, 2018

Fantastic! Nice to see even more fresh coats of paint on a lot of biomes. My only criticism is the contrast of the actual grass and leaves being a more saturated green than the earthier greens in the backdrop of the forest.