Correct respond is to wave or "hey" then casually walk away. Works for me at least.

Games that don't allow accessing the options menu to change the language until after the entire tutorial has been completed. Yes, I know that my system is set to German, and of course it would make sense for me to want to play in German, but your translation sucks like a vacuum cleaner in a black hole. And if you explain everything using badly translated, misguiding words, I'm gonna have to learn everything all over again later. So for

Come to think about it, games that don't allow me to change the language at all. In that case you just lost a potential player, and I'm not even sorry.

When somebody insults your intelligence when you can't answer a question due to lack of information instead of actual problem solving skills. Of course, being called stupid is pretty insulting all around but this irks me in particular because you can't; for example, tell somebody who the 15th president of the United States was (and yes, I am uninformed of this topic and picked a random number) if you've never even remotely seen any information regarding it and you don't have the internet handy. You can't just create facts out of nowhere.

It's better if you're going on and on about crap acting like you know stuff about it but you well, actually don't. But even then, we live in a world where everyone's first reaction would be to rudely tell you off and ask you to commit suicide rather than just kindly correcting you.

And speaking of thinking you know what you're talking about, there's always that one guy you'll encounter in any argument that is so loyal to their opinion and they 100% think it's right that they'll that they'll pummel you into the ground should you give them the right answer, complaining so much that you begin to question whether or not they are correct. Then later you go on some wiki to check the facts and it turns out you were right.

All those people that act stupid in front of teachers for the sole purpose of drawing attention to themselves.

When people in Minecraft multiplayer think eggs and snowballs deal damage. On a related note, when people say the wiki isn't a reliable source of information.

I don't think this thread should have the tag "Casual" anymore...

Well, when I'm at school, I'm basically surrounded by phone addicts. It's not the girls on the phones, it's the guys. It's just annoying when I try talking to someone and they're playing a stupid soccer game from the internet. Every. Single. Day. They're technology addicts. Sure I get on my phone to check the time and stuff, and then at lunch I get on it to play games; but I'm not on technology playing games at inapropriate [how am I spelling it wrong?] times.

Most of my pet peeves includes triggering my anxiety up..... but oh well.

People speaking loudly and laughing around me, especially in restaurants. It makes me self-conscious of how ugly my body is and it invokes a hidden, unnamed demon inside. I do have a loud voice but at least i try to keep it to a minimum indoors.

People that do nothing but laze around and expect to be treated like a king/queen by me. Pretty self-explanatory. It's a

ty thing to do.

Couples/families that argues in public. Also self-explanatory. At least take it on closed doors instead of a public spot.

People who try to annoy me by singing when they know it bothers me (bonus points if it's that song I don't like), and then act like I'm robbing their rights from the First Amendment. I'm fine with singing if you're doing it without intention to aggravate me, but you've tried singing in my ears a million times because you find my aggravation funny, and then you get angry when I ask you politely to stop? I should be the one going off on your rear, but at least I'm trying to be the better woman.

PlatinumUmbreon said:
People who try to annoy me
Click to expand...

PlatinumUmbreon said:
when they know it bothers me
Click to expand...

excessive emoji usage. why do you need 6 laughing emojis? isn't one enough?

same goes for responding to messages with only emojis, usually the laughing one. don't know why, but it seems insincere

Motion controls, specifically in video games. Don't get me wrong, it's a really cool concept and despite being the lazy introvert that I am I'm not against exercising (at least, when it comes to that level of it anyway), but until we can create technology where I don't have to reset the position of the controller every 5 seconds when it goes out of sync with the console or whatever they're not as enjoyable as they could be. The Legend of Zelda: Skyward Sword was really fun but virtually unplayable and tedious from my experiences since it was entirely motion based with the Wii remote and I had to constantly pause the game and realign the connection to make sure Link wouldn't swing his sword down when I wanted to it go right whenever I had to fight something.

And it didn't really help that there was no way to center the Wii remote in game; in order to do that, you had to pause the entire thing and go to the map screen.

The same thing goes for really old remote controllers for your television set. Admittedly, it's gotten better over the years. Now I can just point the remote in the opposite direction of television and it'll still register the buttons I'm pressing, but with lots of remotes even if you're pointing it directly at the TV it'll take a few tries before it'll do anything, to the point where it would probably be less of a hassle to get up and turn the thing off manually if you were trying to turn it off with the remote.

The pronunciation of the word "data" as "day-tuh." (It's that word specifically, and I have no idea why.)
Books that describe the specifics of a recurring event every time it happens. (Entering the pensieve in Harry Potter and the Half-Blood Prince, for example. Once is enough, maybe twice if you really need to establish consistency. After that, just "they entered the pensieve" is fine.)

When people try to look at what I'm doing. I don't know why, but I hate it when people snoop over my shoulder. Seriously, unless if you're my parents or my teacher, what I'm doing or looking at is none of your business.

People who are overly open about their sex lives. I doubt I have to elaborate on this.

I'm also really irked by those people who use "big eyed emotes" (that's the best way I can describe them. Like, for example, even though I typically find the jokes that include these humorous, "OwO") at the end of every sentence they make, usually with hardly any punctuation or grammar included in it just to top it off. I suppose this falls into the same category as people who use an excessive amount of emojis or punctuation whenever they respond to something, but half the time I can't tell what emotion or reaction that these faces are even supposed to portray. At least when people say, respond with a bunch of happy face emojis )) you can clearly tell that they're trying to say that they're smiling even if using multiple of them is a tad excessive.

And, since I mention it above, people who use a multitude of punctuation for emphasis. Sometimes following your sentence with more than one exclamation point makes sense but for some reason it just irks me. Usually one is enough, and even if you come to the point where it's acceptable to use more than one, adding like 15 of them is just going to hurt my eyes and make me not want to read it any more.

People that will go up and say rather insulting things to others (and I mean things that will truly get under someone's skin. Making fun of another's health, their mental health, making fun of problems they frequently struggle with, being sexist, being racist, etc.. Unless your on a diet, you could probably be tough skinned enough to not get upset when someone calls you fat) with the intent of upsetting them, and when said person is angered by their actions, the offender hides under the thin but somehow effective veil of: "I have the right to freedom of speech." Just because you have the right to free speech doesn't mean you should walk up to people you hardly even know and be a total asshat.

RavageTheSavage said:
People that will go up and say rather insulting things to others (and I mean things that will truly get under someone's skin. Making fun of another's health, their mental health, making fun of problems they frequently struggle with, being sexist, being racist, etc.. Unless your on a diet, you could probably be tough skinned enough to not get upset when someone calls you fat) with the intent of upsetting them, and when said person is angered by their actions, the offender hides under the thin but somehow effective veil of: "I have the right to freedom of speech." Just because you have the right to free speech doesn't mean you should walk up to people you hardly even know and be a total asshat.
Click to expand... 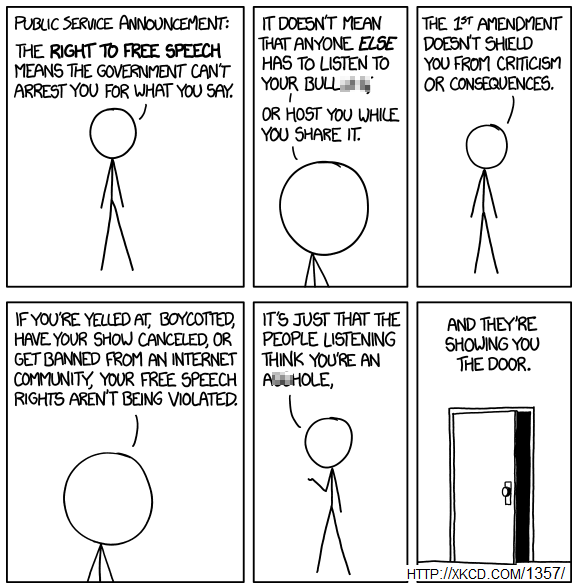 People that play Support characters in team based games that have decent damage potential to only rain fire on the opposing team and not heal their allies. I mean, I guess I won't need healing when the enemy team is dead, but when I do die, I'll probably be blaming it on them. Looking at all the TF2 battle Medics, Overwatch Zenyattas that forget their harmony orbs exist and Pips in Paladins that don't seem to realize their healing potion is one of the best support abilities in the game.

Seriously, I'm sick and tired of losing and seeing that our Pip did zero healing. That means he didn't even heal himself, which doesn't help him as a battle Pip either.

I feel you Ravage. Sometimes our team will be suffering, even though as a Medic main I'm putting forth all my effort towards keeping everyone alive. And then I see that one Medic who is just attacking the enemy team without healing anyone. I mean, come on, help us out here because I can't keep everyone alive completely on my own, especially when the opposing team is pushing.