Hello, Terrarians who somehow visiting my lonely art thread.
I like drawing, and usually do a couple of them when I have free time and motivation.
I've created this thread to put my arts here.
​
[insert art here] 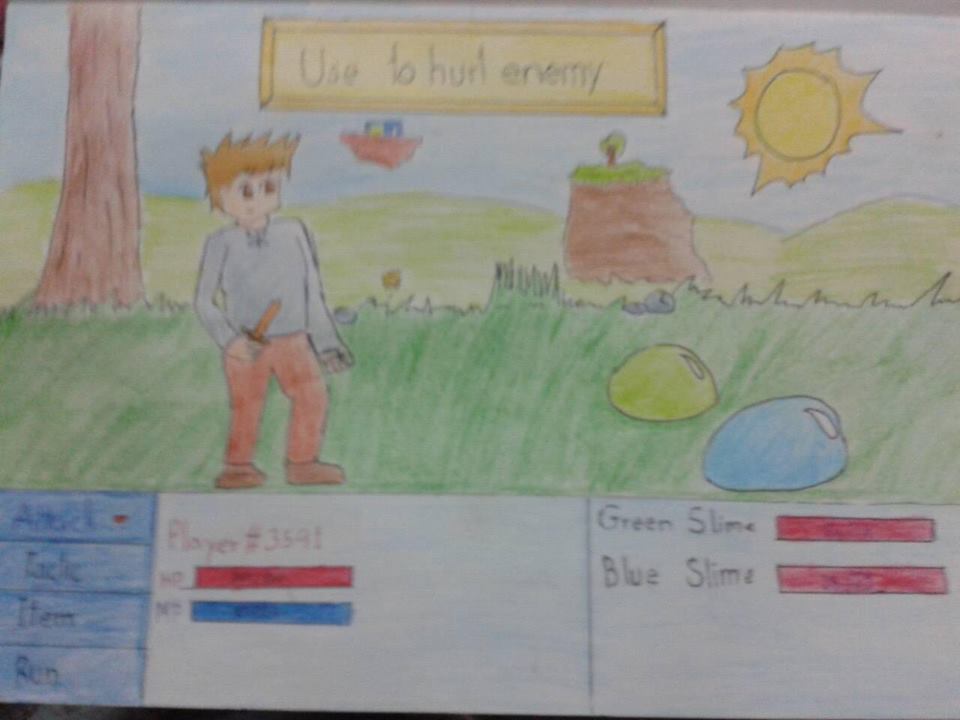 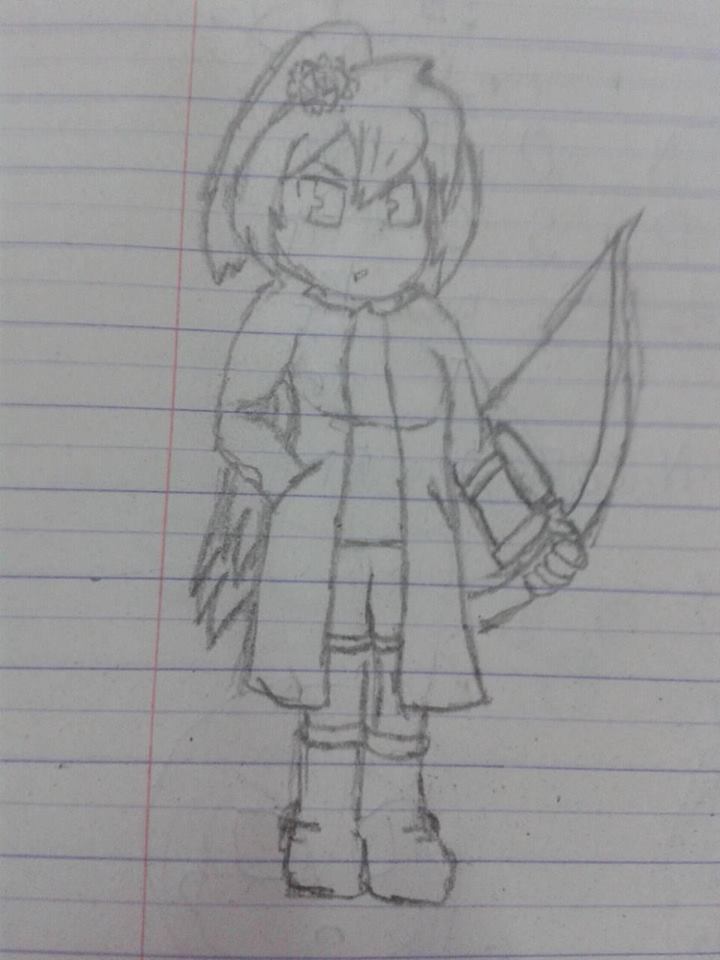 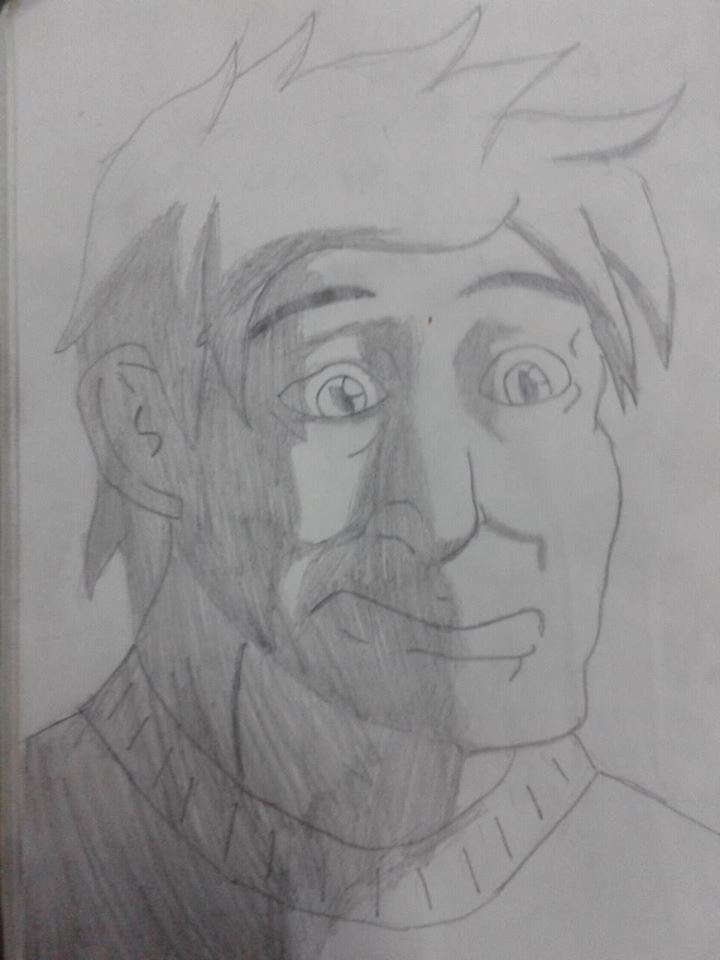 Nothing to see here

Yes, I accept request. ​
-Your request doesn't have to be Terraria related; it can be anything you want.
-Forum rules still apply here.
-Sorry if my art skill doesn't please you, I still have a lot to learn. 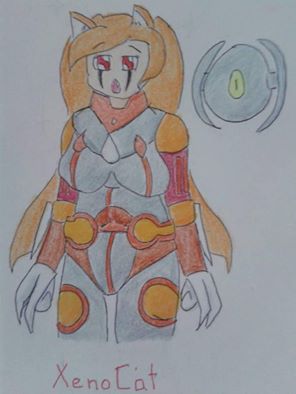 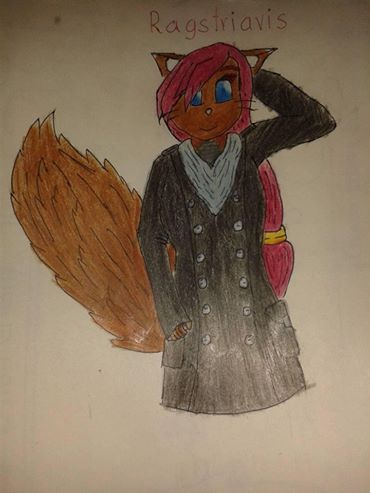 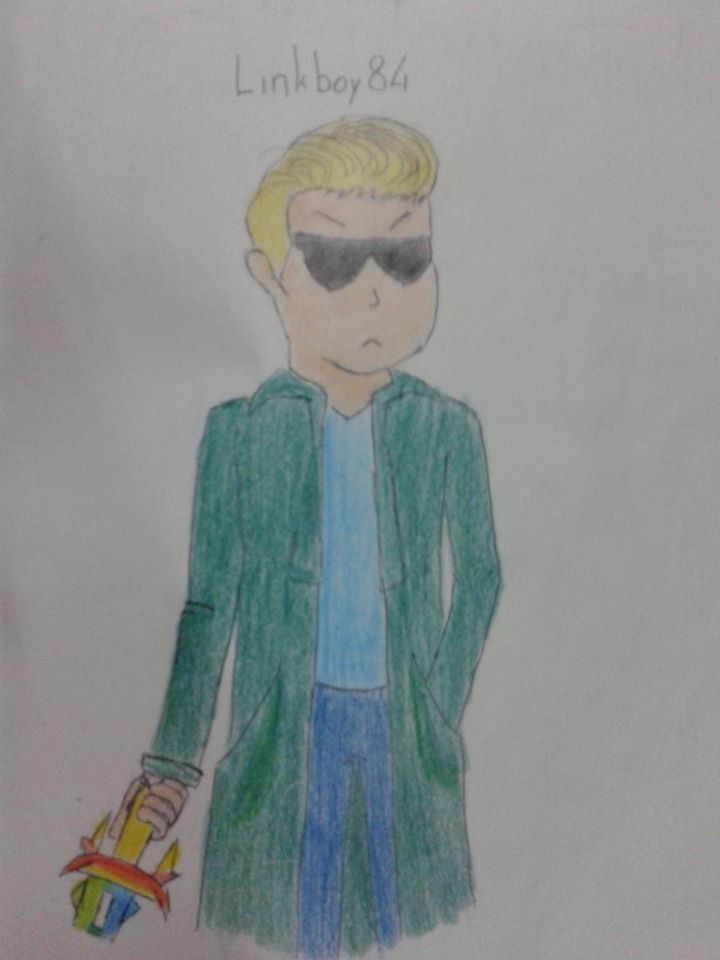 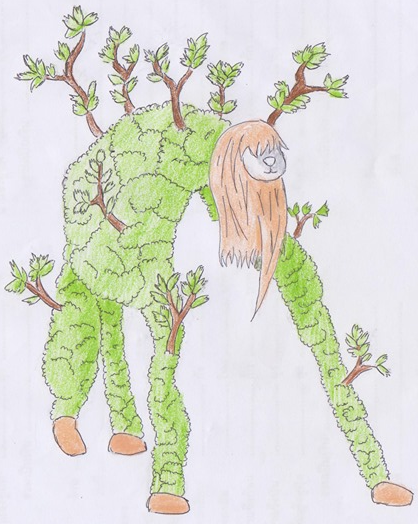 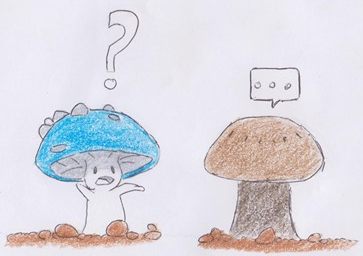 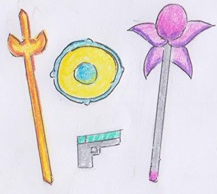 Hmm.
I guess, I suppose, I'll request something for funsies. =w= 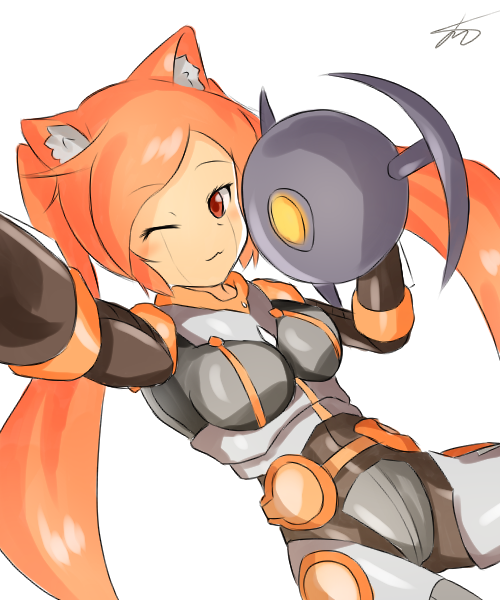 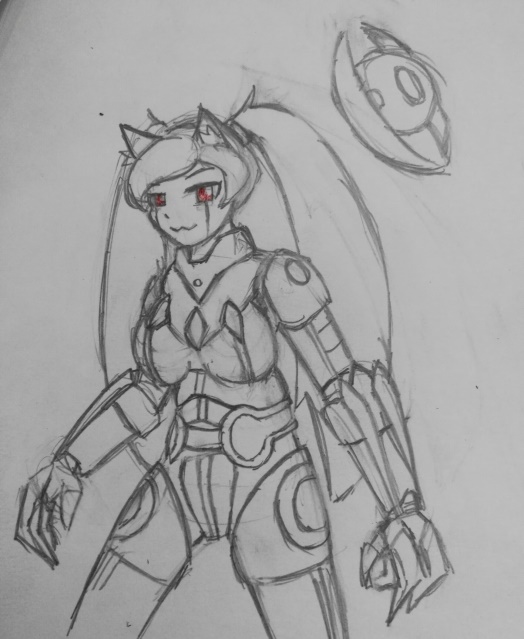 Not sure if you need any more details, but I'll leave it up to your imagination for poses and such. Thankies =w=

A short, lean-built keidran character (not skinny, just lean). His figure looks very girlish, to the point that he gets mistaken as a girl a lot, as well as his features in general, though he's male. His hips are slightly wider than his stomach, and his shoulders are not broad, a lot of curves, ETC. His hip area is probably wider than his shoulders, pretty much an hourglass shape. He's a mix between a dog and a cat, though he looks like a cat, except for his tail, which is longer than normal. His main fur coloring is dark brown, in this pattern. The black fur is replaced by very dark brown fur, the tan/gold fur is replaced by dark rusty red, and the cream fur is replaced by dark grey fur. There's the standard very dark brown fur on his long tail (very long, longer than a regular fox tail, like the length of a tiger tail. It's longer than his legs are by about half a foot), which goes to a point, like a dog tail. It is really bushy, and the fur on it is relatively long (kind of a mix of a dog tail and a maine coon tail, like the one is this picture, although half as bushy), with solid dark grey fur starting halfway down, continuing to the end. On the top center of the chest there's a puff of fur (which is dark brown). His eyes are ice blue, and he has thick, bushy, angular eyebrows (in this shape) that are the same color as his hair. Has larger than normal (and I mean a fair bit larger) cat-like ears which turn dark grey toward the tips. He stands about 5 feet tall. He generally wears long, gray baggy cargo pants (which cover everything but his toes, and the backs tend to drag on the ground) which are too big for him, and doesn't wear shoes. His pants are folded back a little at the bottom, creating a sort of cuff, though they still drag. There's a hole just above the right knee, and the ends of the cuffs are a bit frayed. Next, he wears a long black buttoned up trench coat (which, to compliment his body type, is relatively form fitting, showing his really girly figure), reaching down past his ankles, with a big, long, loose hood which is not up (kinda like a hood version of Link's hat, bunched around his neck), thumbholes, and cuffs at the ends of the sleeves where they're folded back on themselves. It's the type without a fancy collar, and the sleeves are too long, and slightly baggy, ending at his knuckles in the thumbholes. It's split up the back, from the bottom almost all the way up to the waist. It's buttoned up all the way, and there's flaps at the bottom which button back to reveal his feet. At around the thigh area on each side the coat, there's a big pocket with a button top on either side (his coat is kinda like this, although with the modifications listed, and it fits his torso in that shape. It lacks the brown belt, though). Surprisingly, no other part of the trench coat is baggy. On the top of his head, he has hair apart from his fur, like a human. This is colored dark red and is wavy. It's insanely long, flowing almost past his hips. This makes him look even more girly. It is thick, and wavy. He usually flips it around the back of his neck, and ties it like this (although his chest is flat, unlike the guy in that reference). It does cover part of his eye. His legs are digitigradein structure, and thus he walks with his legs bent forward, which shows, despite his baggy pants.
(Basically he's supposed to look like a Keidran) Over the back, he wears a rifle scabbard, in which is a rifle which looks like a M14, with a dark walnut wood stock, a long-range scope, and a 2-foot-long bayonet. He wears two leather belts, which cross in a horizontally oblong X pattern, on the lowest point of which are two sheaths built to fit this sword. (each of them are 3 feet long ) The color scheme of the swords is as follows: The blades are gunmetal, the handle is dark walnut wood, the handguard is gunmetal with shiny, polishes sides. Along the bevel of the blade is also shiny polished metal. All the belts/slings are black. The sheaths hang at either girly hip, and the belts push the coat tight around his waist, exposing his girly hips, stomach, and shoulders.

His rifle is basically this, but with a dark wooden stock, a more vertical pistol grip, the aforementioned bayonet, and a longer scope.
Just basically draw him like you would a girl, with the long feminine eyelashes, and stuff around his eyes, please.. Like the eyelashes in this picture.
(His body and head is more or less constructed like this.)

His ears are kinda more to the side of his head though, but still a bit above where a human's would be. Could you make his head more triangular, like in the body construction reference, with a short muzzle? He's 14, by the way.
There's a picture of him in my avatar, though the hood is bunched up and pulled forward a bit more, you can put him in any pose you like. Cheers!
Last edited: May 28, 2016

It's cute =w=
Thankies much

(Sorry for typo on your name there)
Anyway if you're going to bring your OC description to request another one, please organize it a little, it definitely help

Because I don't have any idea to draw so I did CC entry.

Anyway I have some free time so there's no limit about how many request I'll take at the moment.

(Sorry for typo on your name there)
Anyway if you're going to bring your OC description to request another one, please organize it a little, it definitely help
Click to expand...

Sorry, I forgot to respond! Thank you very much for drawing him!

I drew a doodle.

Can me you do my main OC Linkboy84?

This is my main OC, that's why he's called "Linkboy84" like my username. He's a melee character.

The sunglasses are a little too big, but I did give my In-game Sprite as a ref so yeah.

The sunglasses should be black, but that's all to note.

His manner is much more grim and serious, but Mag just ran with it, and I appreciate all art made for me, as well as accept it without question.

Nothing to note here.

Probably the most accurate one, but I imagined the shoes being a little more detailed than that.

He only uses the gun rarely, but he does use it for enemies that he doesn't want to get close too.
Padlet Wall
Last edited: May 24, 2016

Hey, can I make a second request? I liked the first one a lot.

Rastriavis said:
Hey, can I make a second request? I liked the first one a lot.
Click to expand...

Could you draw one of these walker... things... with a few changes to them? 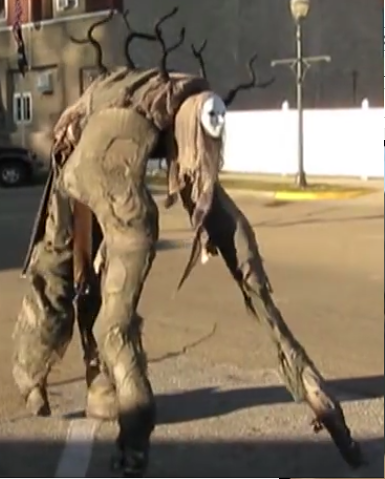 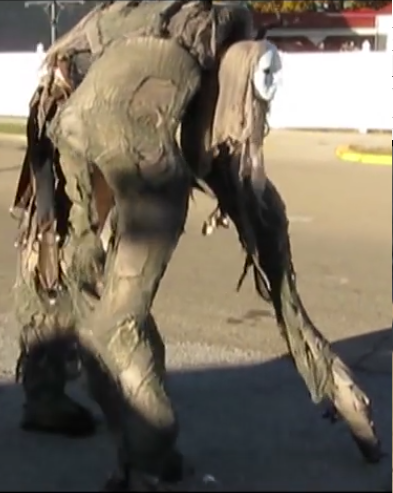 Could you have moss, twigs, and bog weeds hanging off of it at various points, and give it a thin layer of fur (using the exact same colors as in that picture). And then could you give it an... I dunno, more natural/animal-looking face? You can have artistic freedom for that one, all I ask is that there's a set of antlers on top of its head, a pair of tusks, and a rather menacing-looking visage. It's around 8 feet tall.
Last edited: May 28, 2016

Rastriavis said:
Could you draw one of these walker... things... with a few changes to them?

Could you have moss, twigs, and bog weeds hanging off of it at various points, and give it a thin layer of fur (using the exact same colors as in that picture). And then could you give it an... I dunno, more natural-looking face? You can have artistic freedom for that one, all I ask is that there's a set of antlers on top of its head, a pair of tusks, and a rather menacing-looking visage. It's around 8 feet tall.
Click to expand...

Sorry for the delay @Linkboy Here's your request!

And I draw the guide. 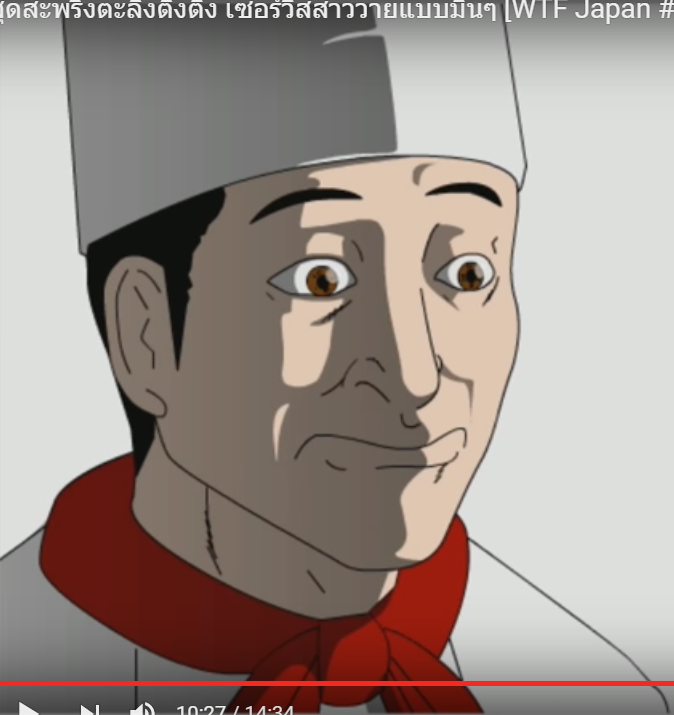 I love it! Thanks!

A doodle I draw in class.

Requests, huh?
I wonder, if it is REALLY still on, but I'll do a request anyway.
Well, ya'll be able to draw my OC ("closest" one on my avatar) with Varia suit from Metroid series without helm?
You must log in or register to reply here.
Share:
Facebook Twitter Reddit Pinterest Tumblr WhatsApp Email Link
Top Bottom