So, I was prepping for Hardmode, getting tired of my NPCs wandering in front of my chests, so I figured I'd sink some of my plentiful resources into rebuilding my base into something beyond a floating box. If I do say so myself, I think it came out rather nice....

A couple of notes: The Daytime image is slightly newer, I tweaked a bit more. I still need to do a little more rearranging of chests and such, and I'll be sticking a couple of armor-clad mannequins in the upper corners. The walls in the central area are iridescent brick, painted green. Below the base (underground) are a couple of pits, liquid generators, a statue-farm setup (I swap in statues at need), and my new arena. Those rails lead to my skybridge.

The side exits look a little weird, but they do work OK, with the doors open I can run smoothly from the rails on either side to the rails on the other. I'm thinking about some actuated caps to seal off the bottom if I need to for an event.

Note that some of the NPCs are currently housed elsewhere, but their rooms (along with the "blank" rooms) will be spares for incoming Hardmode NPCs. I think I provided sufficient spare space for Hardmode equipment and more chests, too -- if I need more space I will continue the top to a pyramid or suchlike. 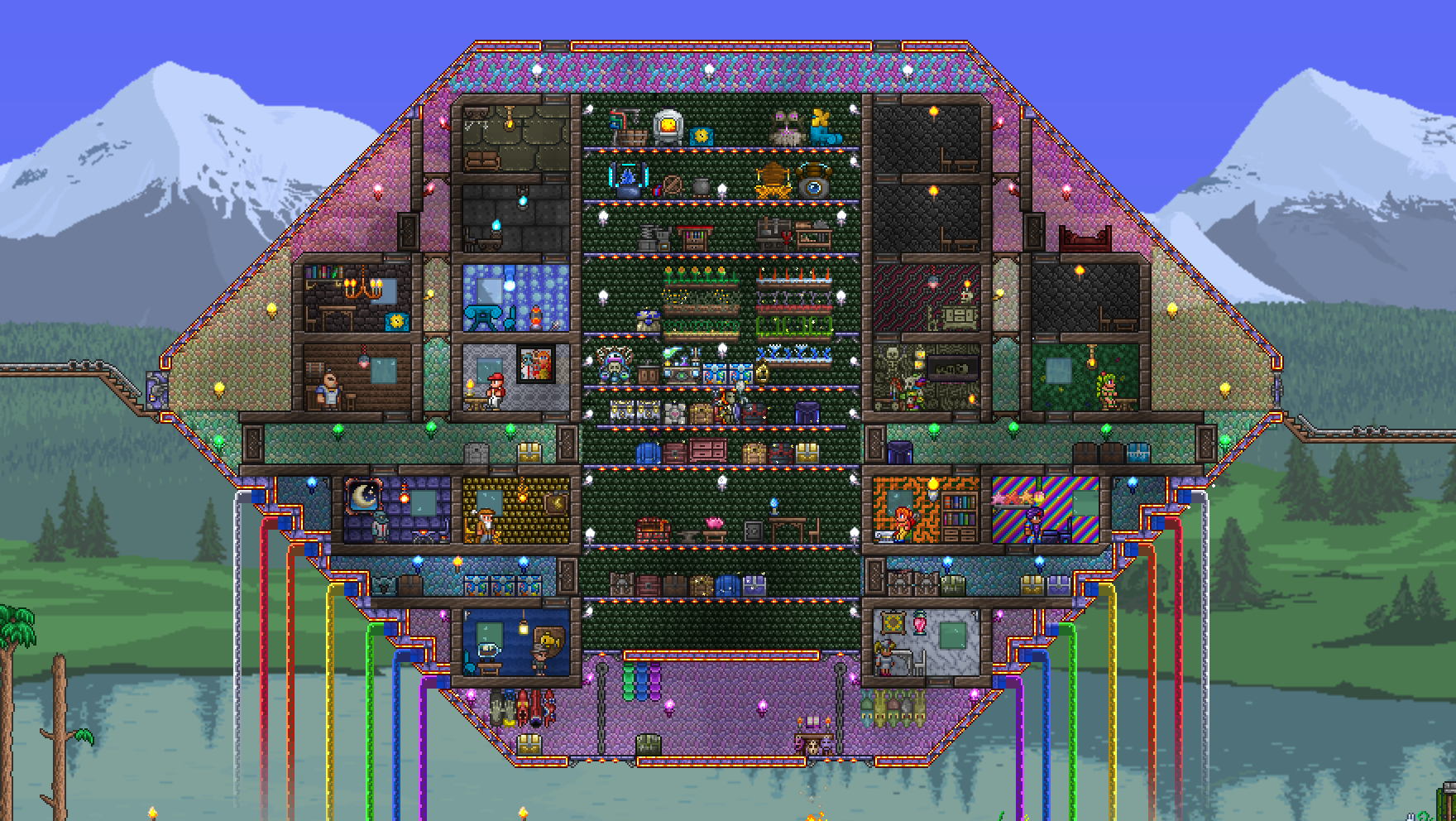 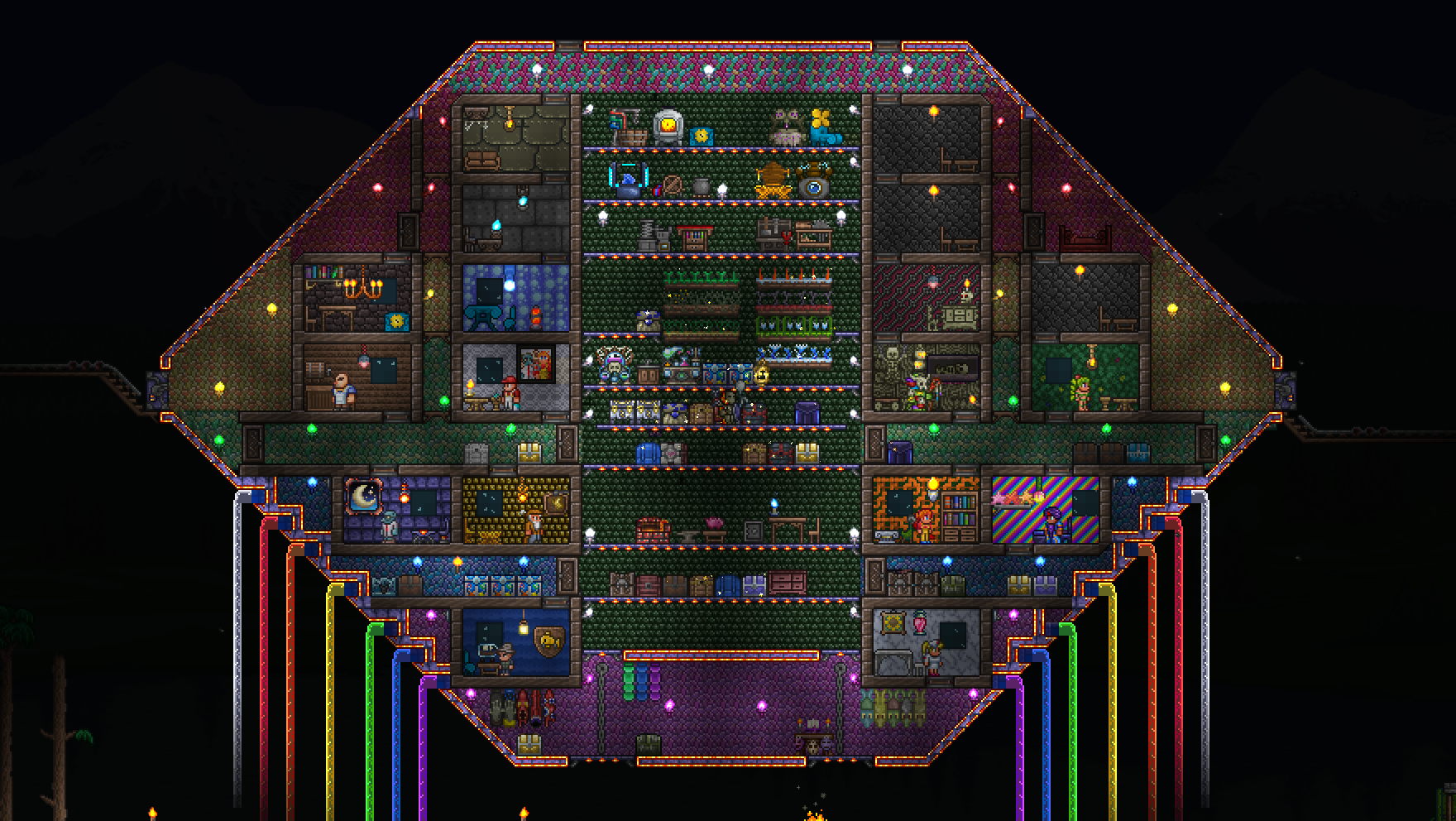 Hmm. Tried a Blood moon image, but it didn't look much different than the night.

That's really interesting! What did you use for the colored water?
M

Kittyboon said:
That's really interesting! What did you use for the colored water?
Click to expand...

Those are waterfalls over Gemspark half-blocks (the wiki, I likes it). I'm still trying to think what to do with my other 18 Gemspark blocks of each color.

Here's a little something. I already uploaded it but not here so here you go 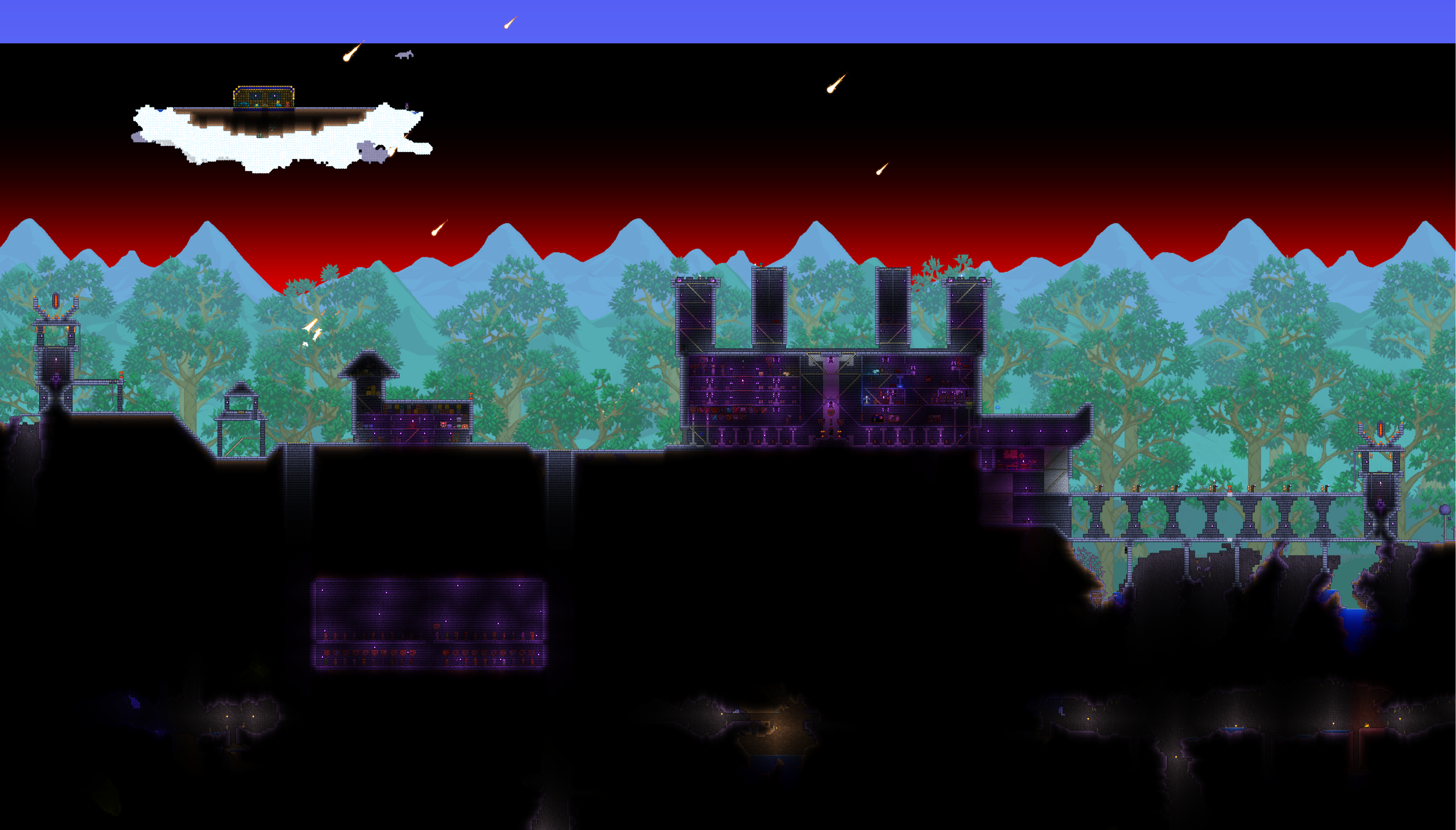 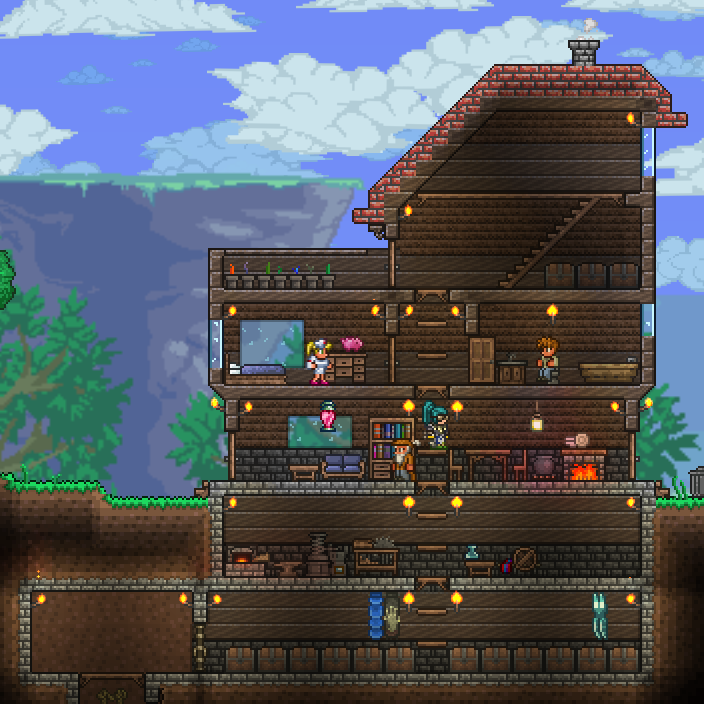 last successfull design i had made while trying to survive in hardcore expert. wanted to do something that was functional and had aesthethics at the same time. looks like something you could actually live on. so i repeat this design each time i start a new run. with some changes here and there. i hope to upload one of the most recent run if i dont die this time of course.

I know my base sucks.
M

Presenting, Mark II of my base -- now with apartments for the Stylist and my new Hardmode NPCs, not to mention myself. I also expanded the top half of the base for more space, and added actuated caps for the bottom. (Did that after my first Solar Eclipse... ) And having learned how to use Camera Mode properly, I included the stuff below my base: Pits with switchable lava, statue farm (ditto), Liquid/Obsidian/Honeyblock farm, my museum (still missing Gold Mouse, Lightning Bug, and Green Jellyfish), and a bit of my arena.

The Heart-&-Star station isn't for that arena, it's one of three for the aboveground space to the right of the image, which is where I've been fighting Hardmode bosses.

ETA: Since posting this I've added player sensors to open the side doors (helps with those events) and upgraded the Tax collector to mahogany table and chairs with a pile of coins on the table. 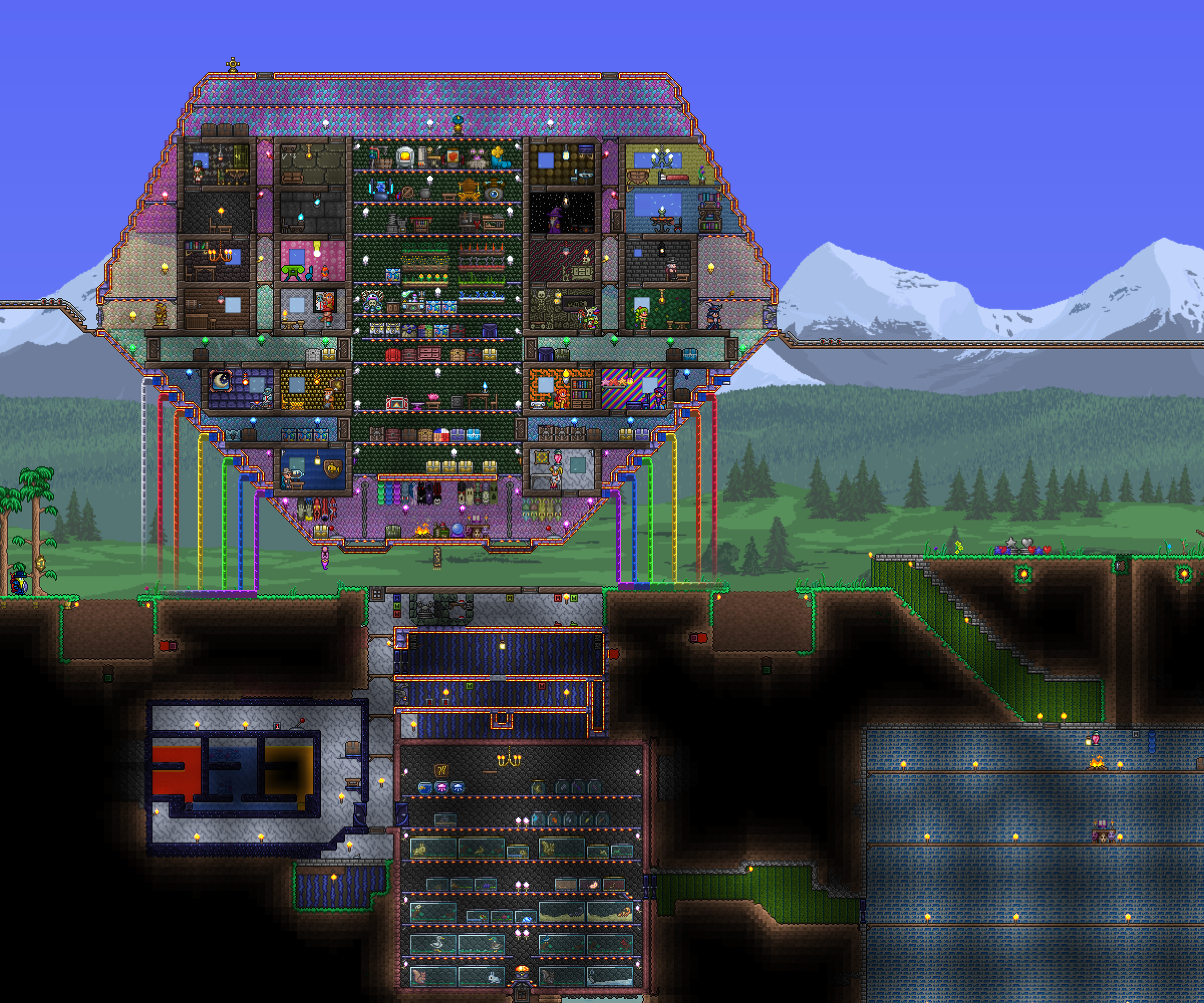 here is a city that a friend and I made.

It has a subway track running under every building. 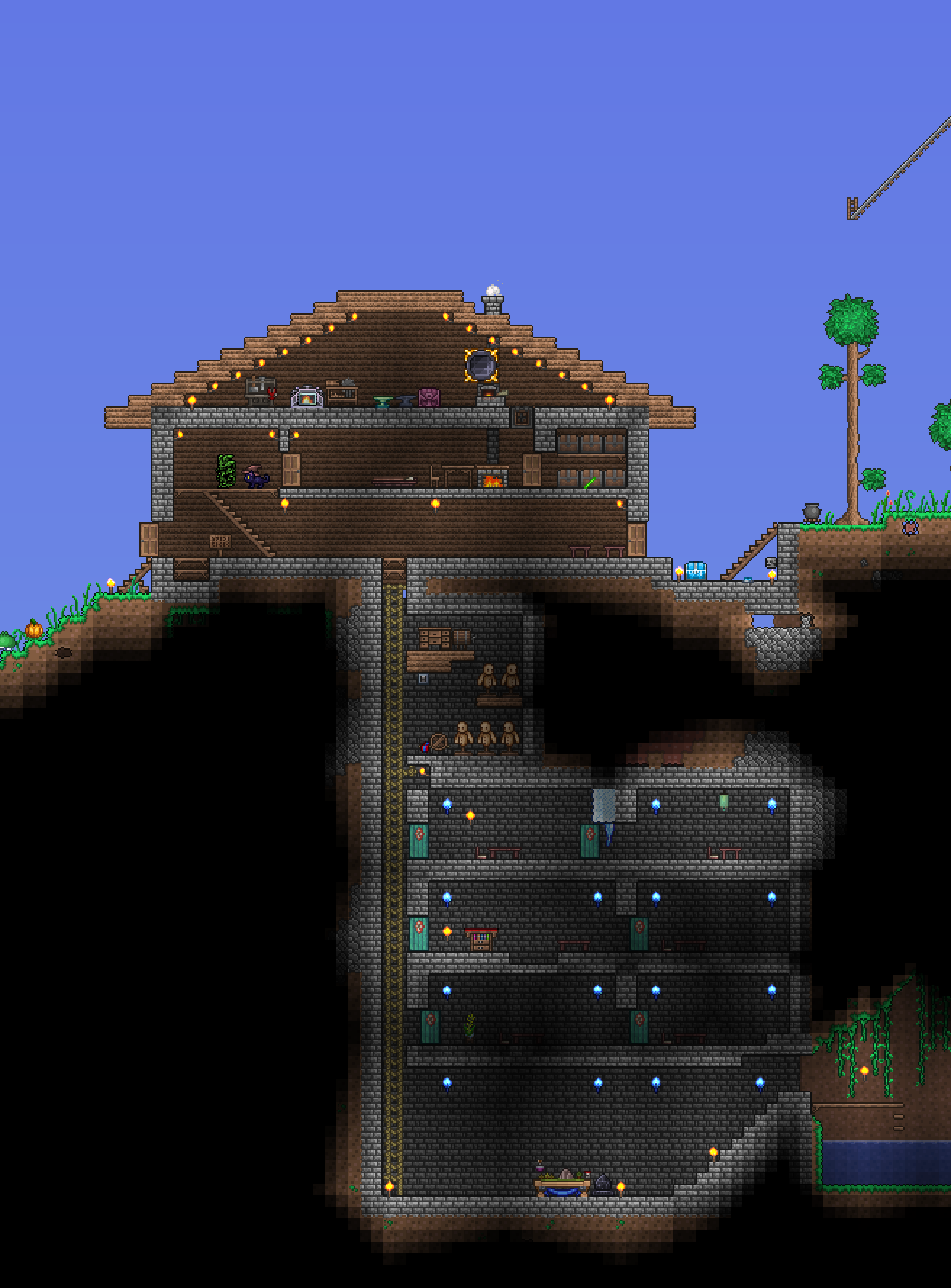 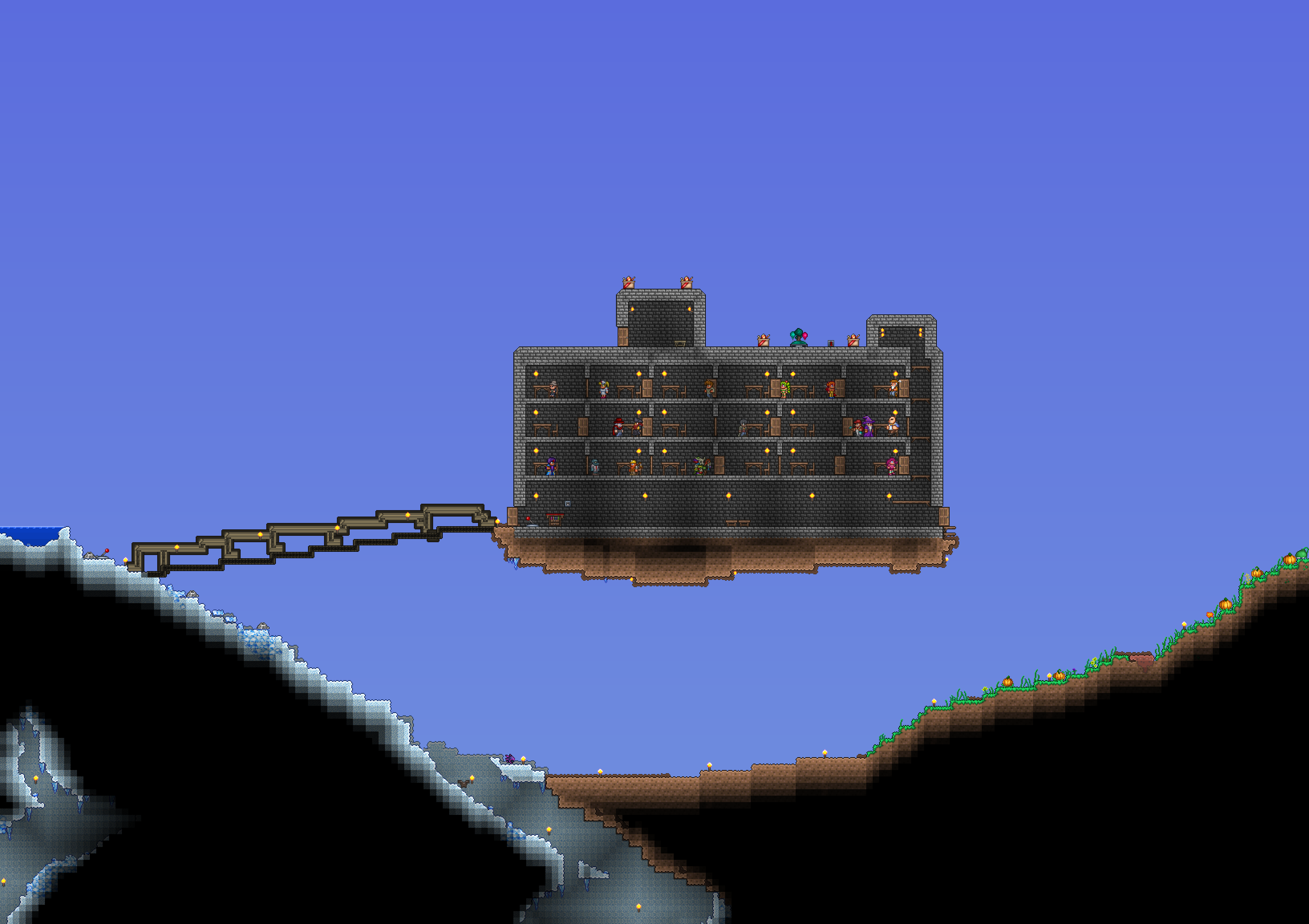 And... Mark III of my base. Feel free to compare it to my prior versions above. Current features: 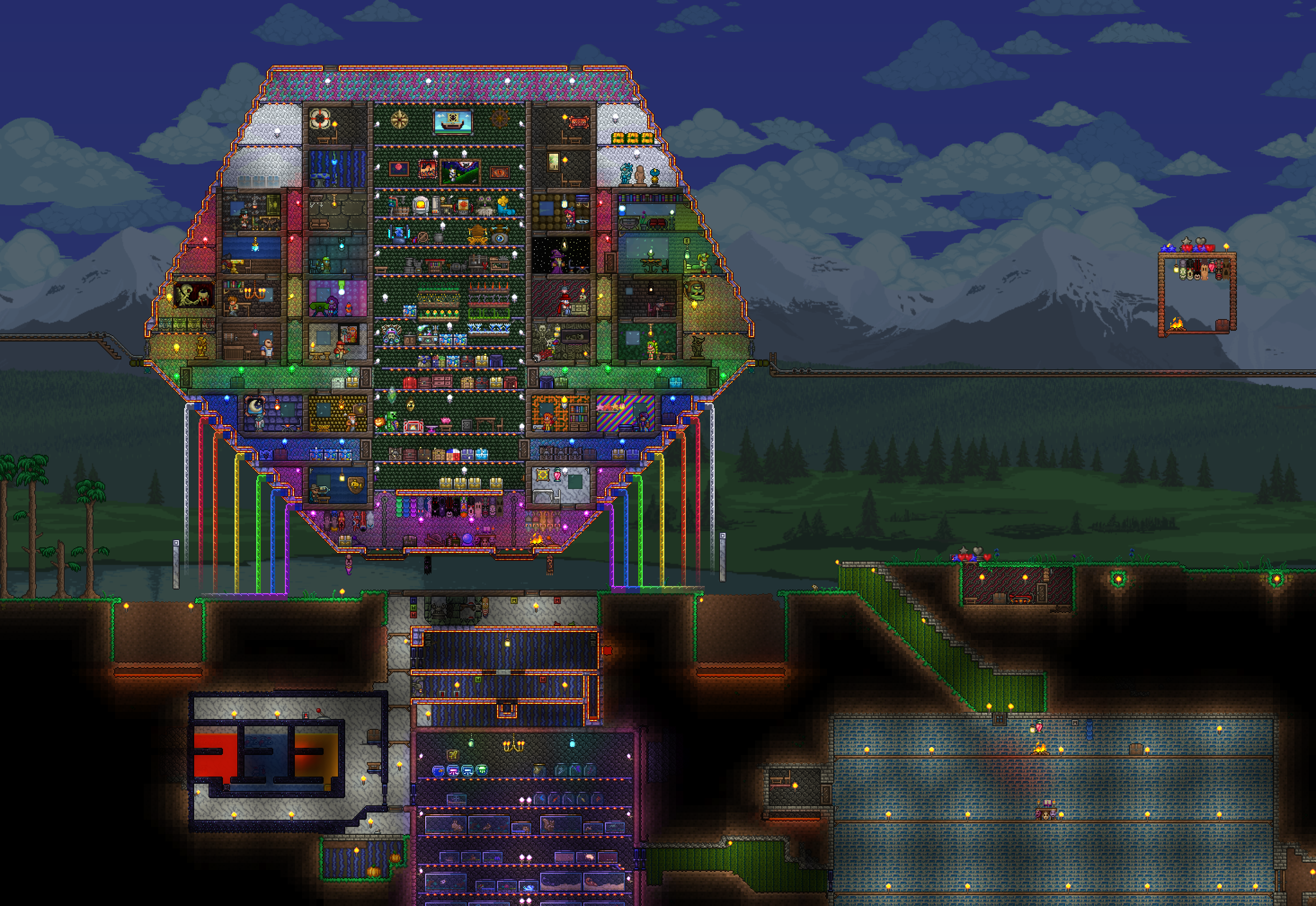 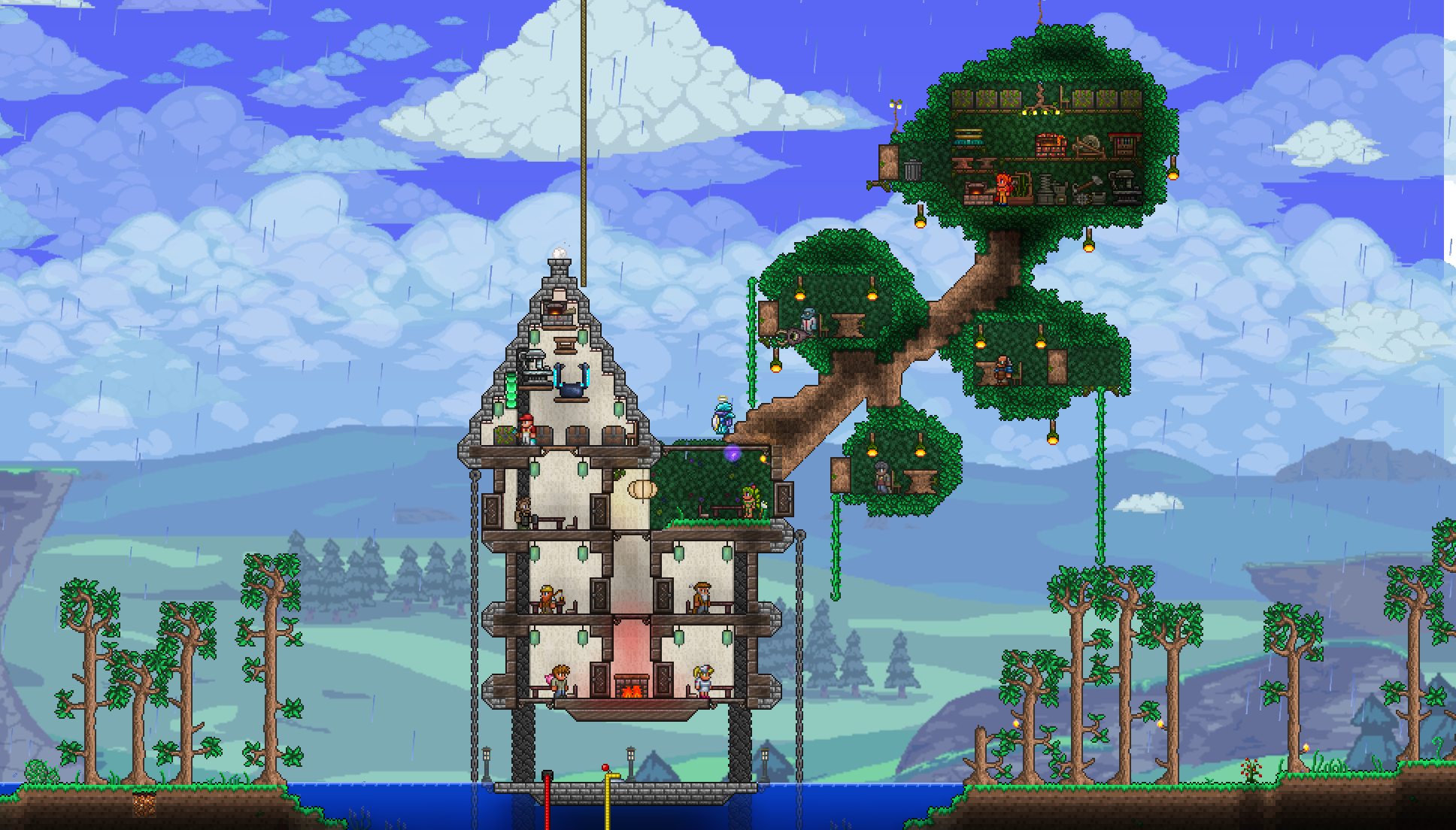 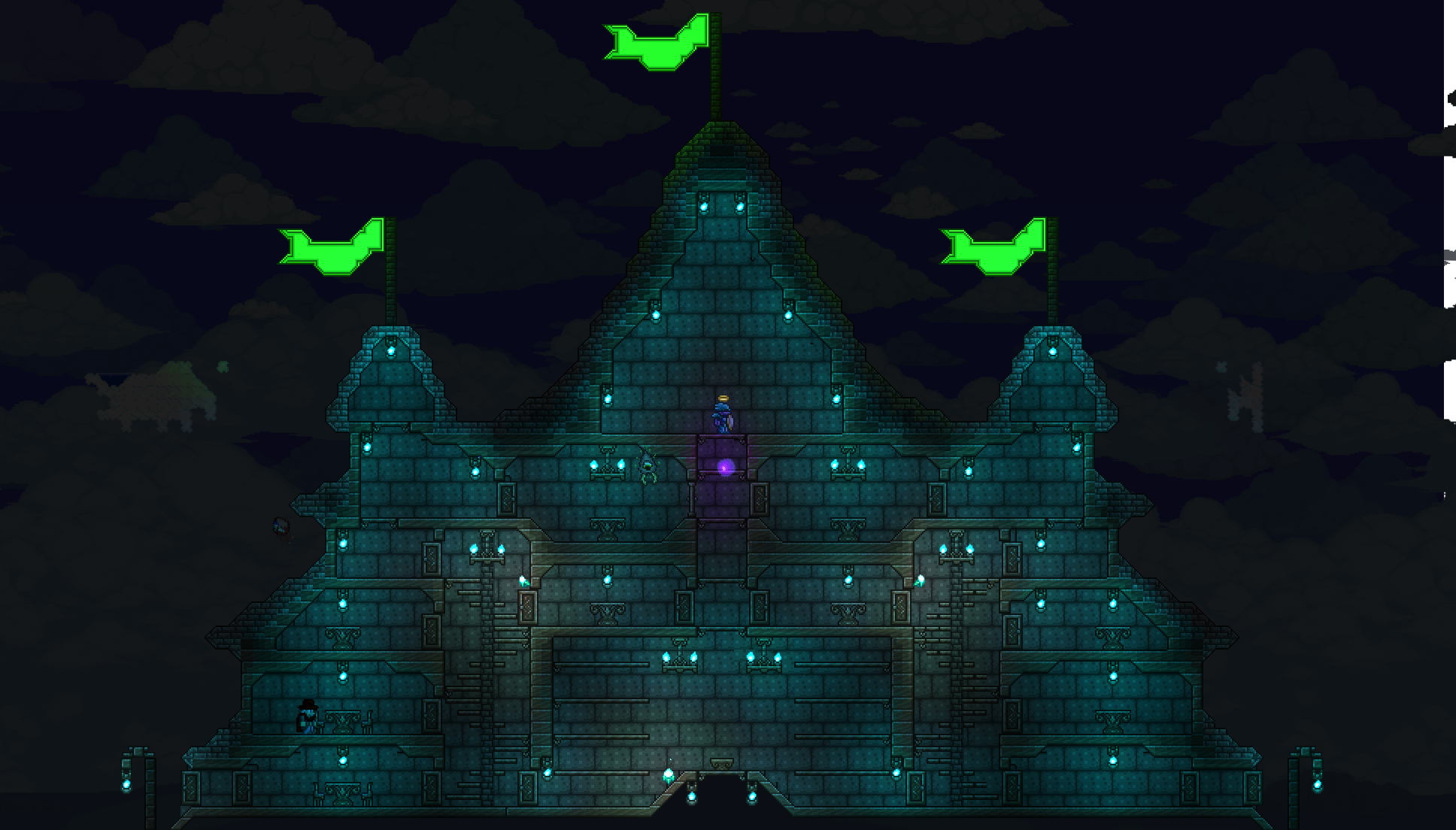 Im not good at furniture if anyone wants to suggest some ideas you can go ahead!

Obviously nowhere near as good as the other stuff on here but this is my first attempt at a detailed build, could i get some tips and stuff guys?
thanks

This is my spawn point. I wanted to have an open base, you can see the spawn on the top, the storage below ant the nursery on the bottom left corner. The objective is to make individual houses for every NPC with their own unique turn, but sticking to the nature/abandoned theme I´m going for. 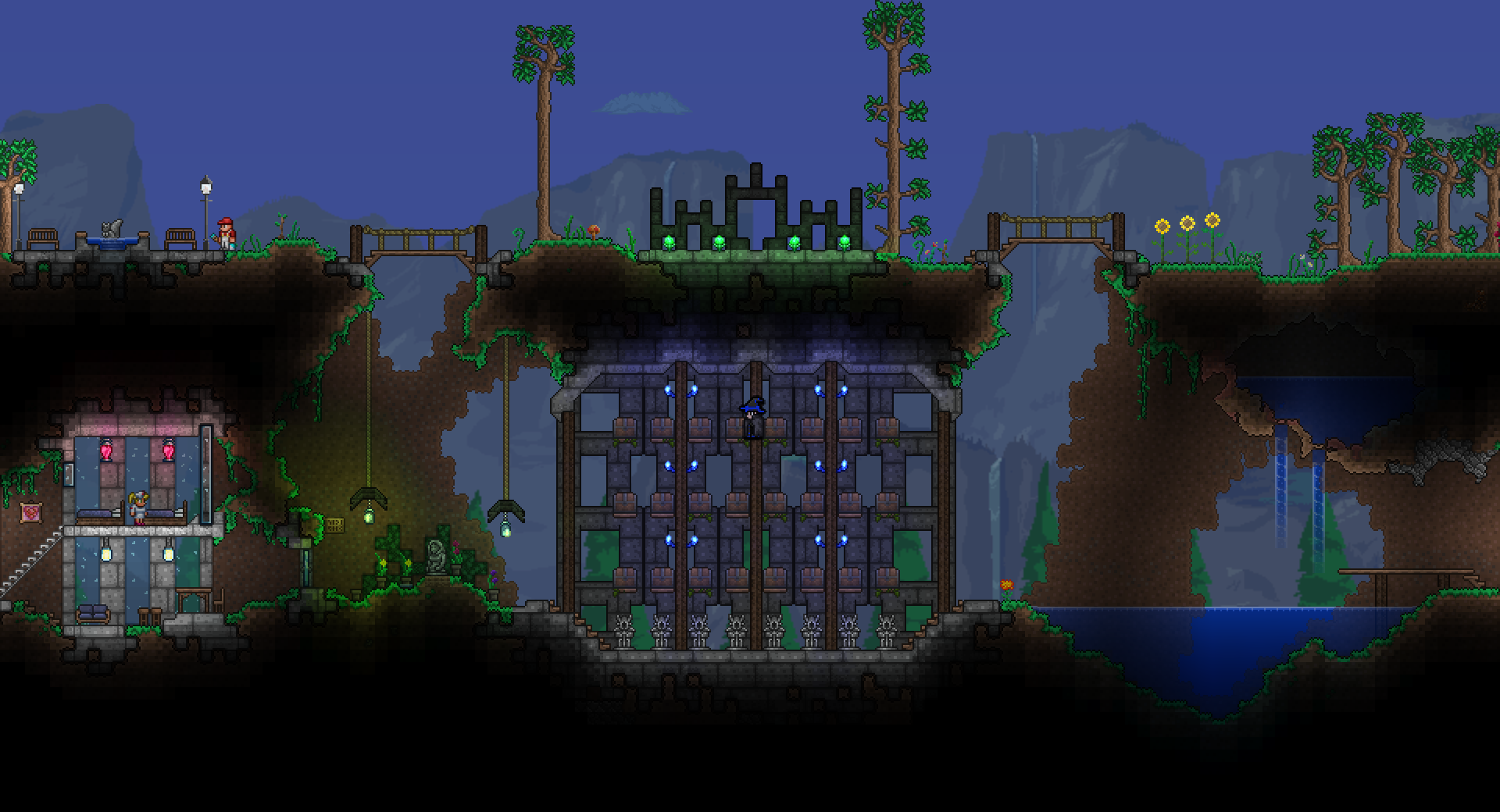 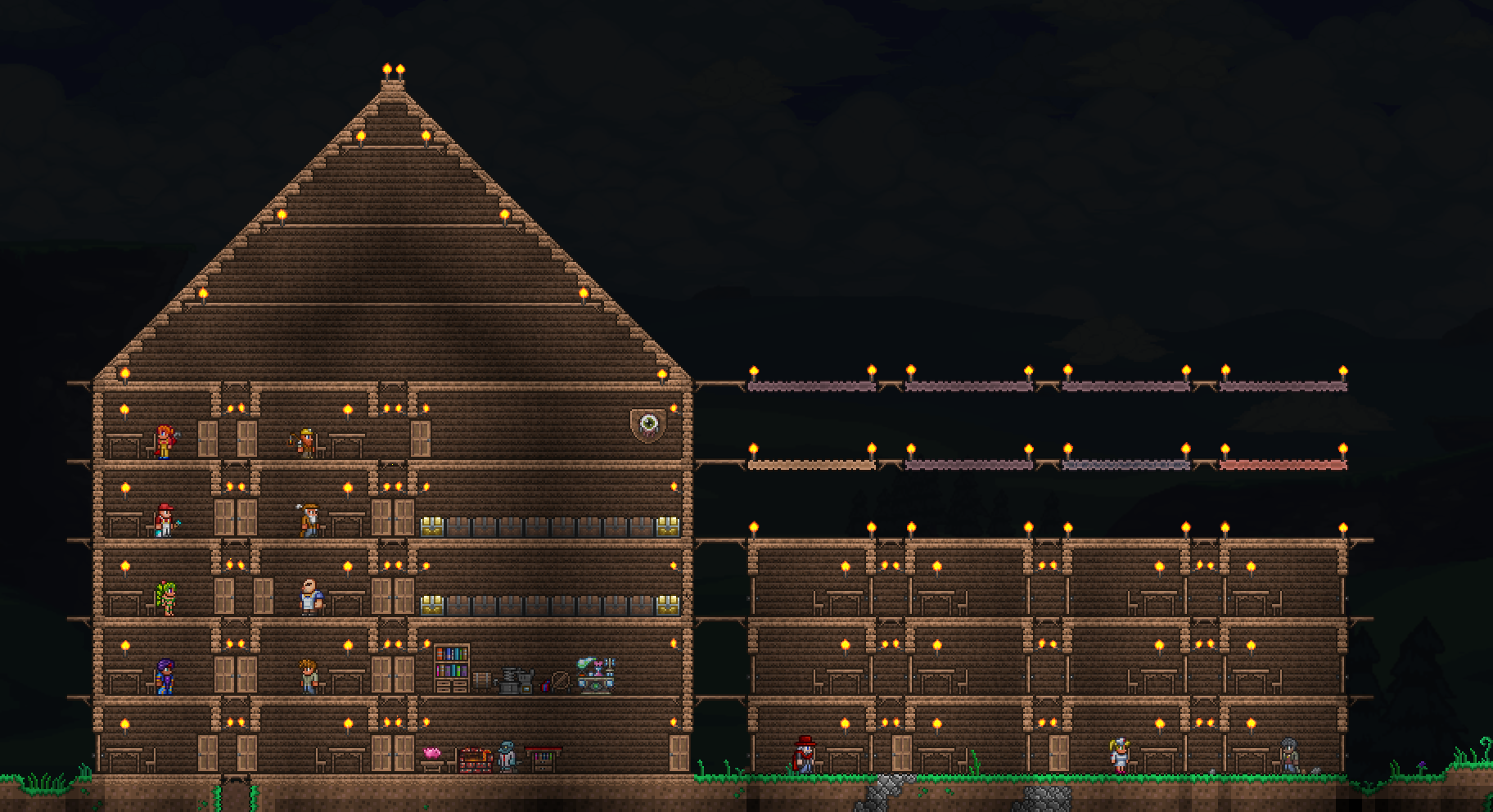 Simple wooden house. Not the best base out there, but I'm pretty proud of it so far.
M 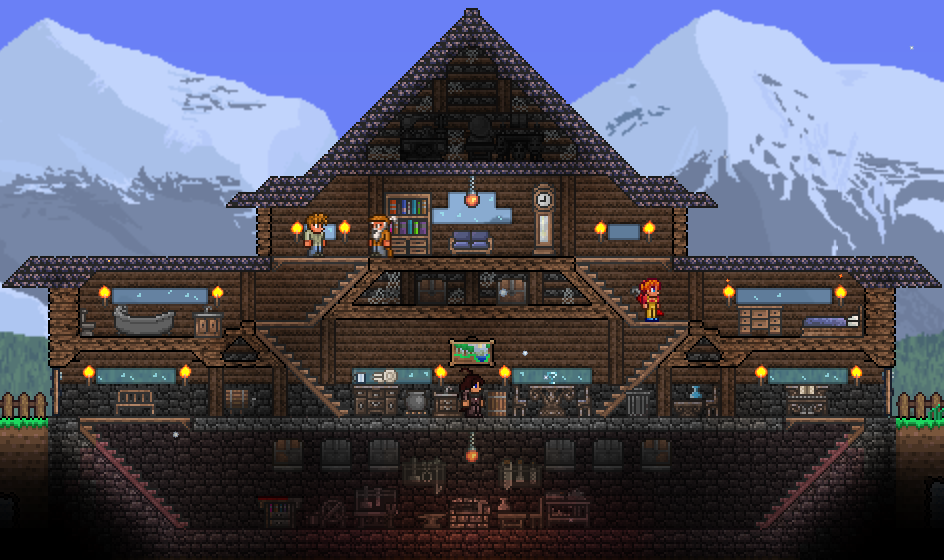 I stole my Spooky Wood from my 1.2 world but that's on my Expert playthrough. I wanted to complete all my NPC housing before I kill WoF. It isn't quite done on decoration but I do have everything set up. Just the furniture and ambiance isn't complete.
Click to expand...

what are the walls and stone made of? also what is the roof made of? 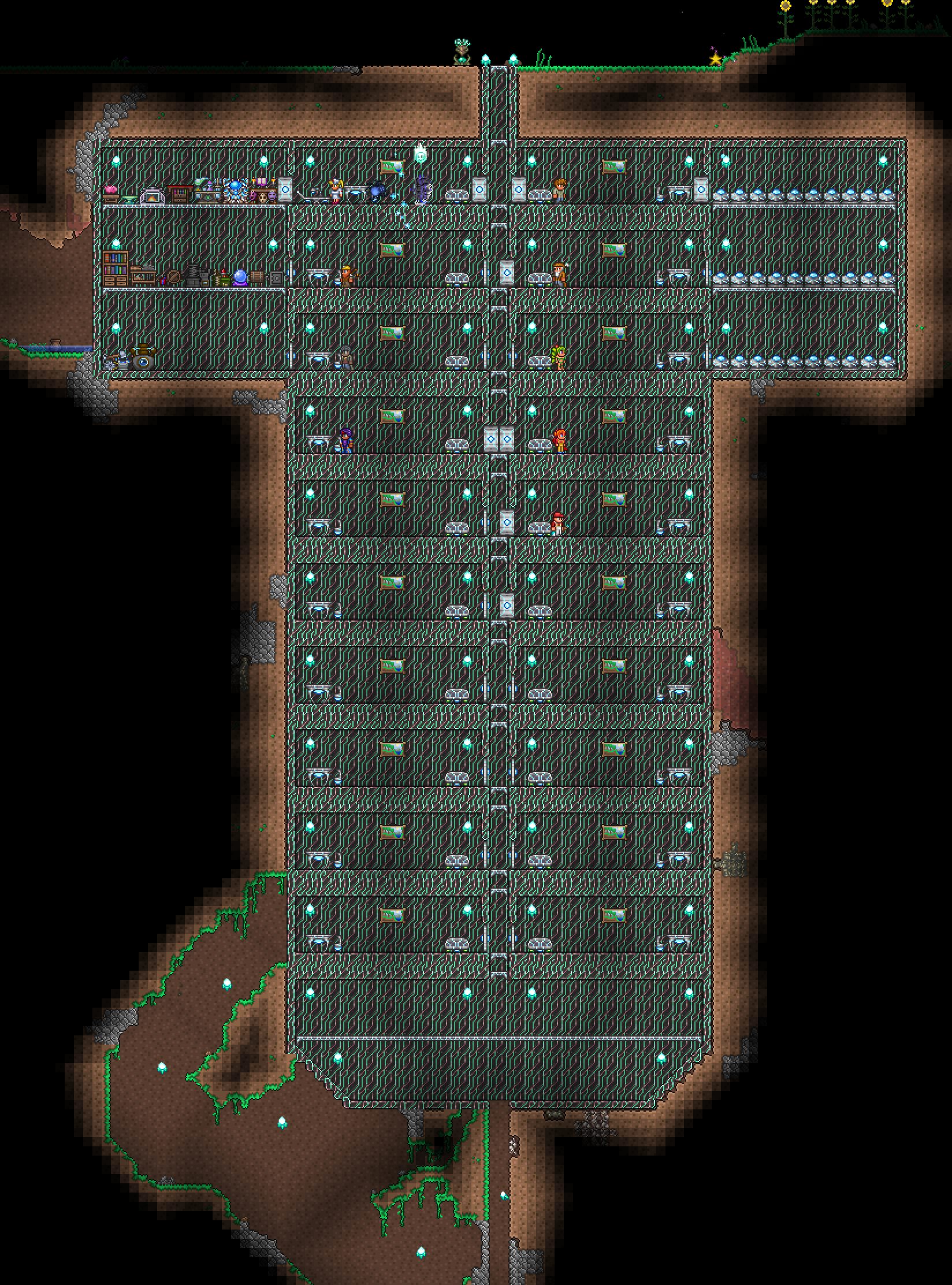