We know you are eagerly anticipating Halloween next week - as evidenced by some of those fantastic Halloween contest creations we have been seeing across all three versions of Terraria - but we wanted to take a few moments to share some tidbits of information around upcoming Console and Mobile Terraria events. First up, we have the Mobile Thanksgiving Update:


A Mobile Terraria Thanksgiving Feast​
Thanksgiving is here!
If you search well, you might find yourself a new little friend...but beware not to stuff his face too much, for once he turns up his nose, there is no going back!
- The Merchant just received a shipment of Turkey feathers, which can be used to spawn your very own Turkey pet
- Be careful of the Cursed Stuffing - and whatever you do, keep it away from your Turkey lest you awaken Turkor the Ungrateful!
- Though if you are brave enough to engage and defeat Turkor, you will obtain the Horn of Plenty - a bottomless regular healing potion


In addition, we are adding a handful of fixes and tweaks. These include:
·Water Candle now works even if you're not holding it.
·Now holding the buy button will keep on buying until you let go of the screen. (Same as crafting)
·If you reached maximum health of 400 HP (10 golden hearts) the game increases difficulty, mainly higher spawn chance & more mobs.
·Wraith AI had a bug where it was stuck flying on a certain height - this has been fixed


_______​
NOVEMBER 3, 2014 UPDATED INFO:
Good afternoon everyone! Apologies for the delay in providing any news, but we wanted to be sure we had a solid answer before handing out any additional information.

Along those lines, we have great news: the Thanksgiving update has been approved by both Apple and Amazon! This means that you can expect to see the update ready for download later this week for iOS/Amazon/Google Play.

We also wanted to leave everyone with a quick screenshot of Turkor the Ungrateful to further whet your appetite. You'll never look at Thanksgiving dinner quite the same again. 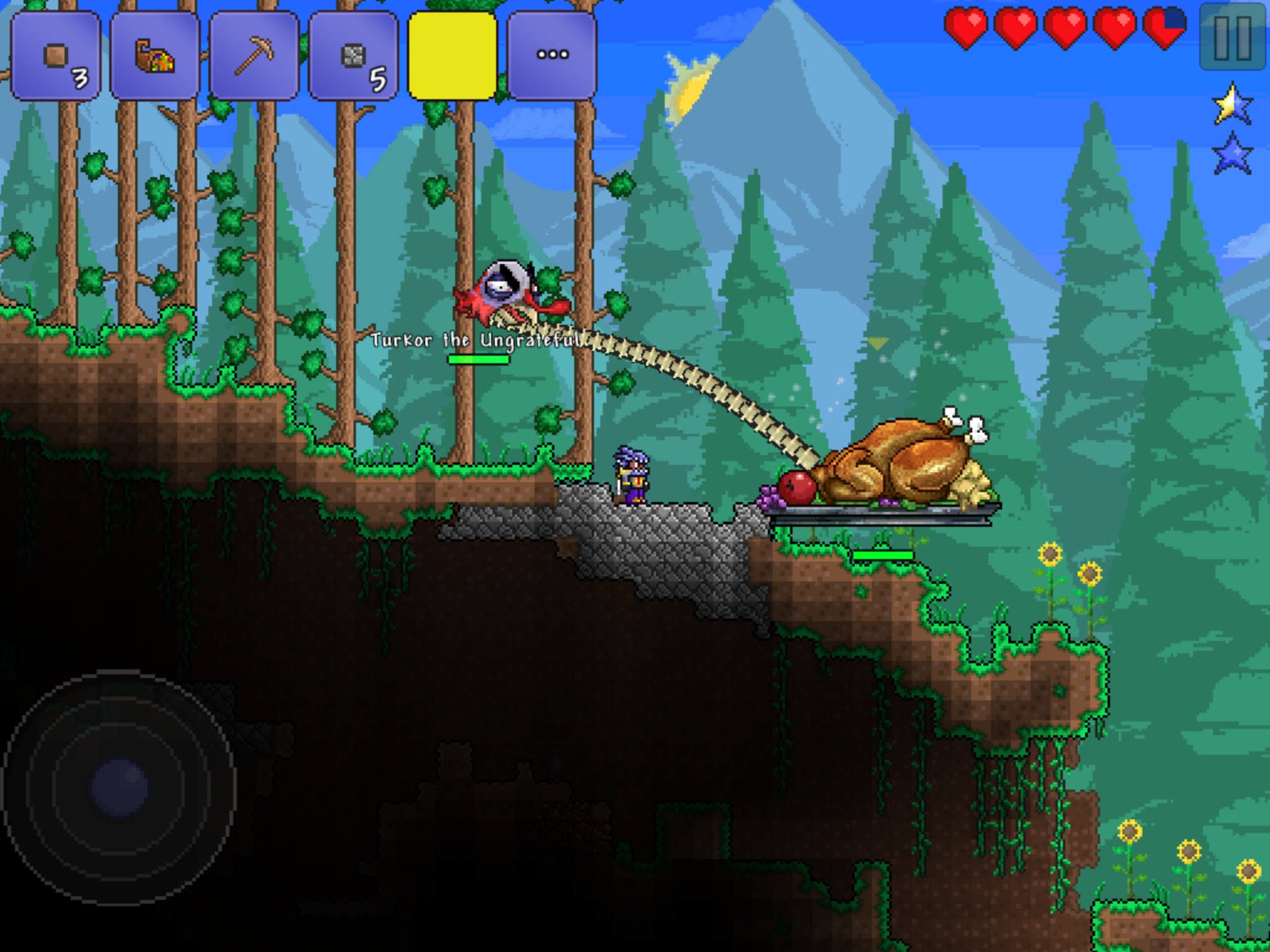 Thanks for your continuing interest in and support of console and mobile Terraria!


_______​
Update on XBox One and Playstation 4 Development​
We are pleased to announce that - barring unforeseen delays - our plan is to deliver an equally pleasing Thanksgiving treat to our XBox One & PS4 fans by releasing Terraria for both of the Next Gen consoles before the end of November! 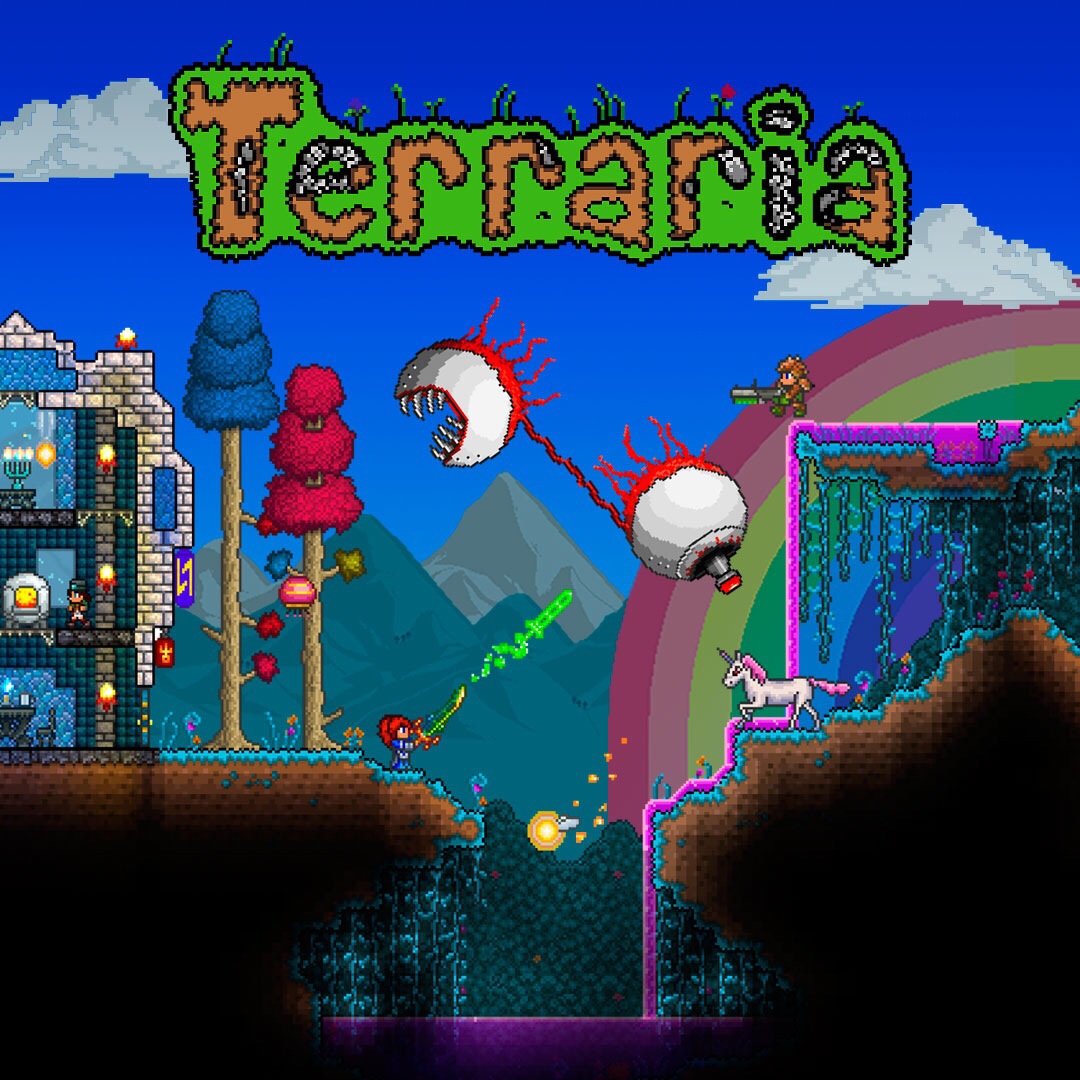 That's it for now - you can expect further exciting developments on the Console and Mobile front in the weeks and months to come. For now, keep those Halloween entries coming and beware of Turkor!
Last edited: Nov 3, 2014

Turkor? All Boss just became harder to All Kill!

One question - does anybody know HOW to obtain the new "Cursed Stuffing"?

Staff member
Moderator
I'm going to be jelly since I no have access to play the non-PC versions!
Last edited: Oct 25, 2014

Steve of a Thousand Naps

So, an update for Mobile, eh?
Also, Turkor?
I assume a giant demon turkey,
Possibly with laser beams.

Any plans for a Wii U version?

I know this is a Thanksgiving update and not Halloween update, but this is looking bootiful.

Sorry for that spooky boo part, I won't judge you if you need to change your shorts, it was pretty spooky.

It amuses me how the mobile version just kind of does whatever it wants for new content. Anyway, really hope the PS4 version has full-sized worlds, it certainly has the power to do so.

Any news on when the mobile update gets released?
Last edited: Oct 25, 2014

I hope that someone beats Turkor before tomorrow, because I'm dying to see it. I want to know if it's worth playing through the Mobile Terraria to find it, because I bought the game, but I haven't played it much because I don't own a tablet, so I haven't had the patience to even try beat the EoC with such a small screen (My phone is an Android Motorola X (5.09 x 2.57 inches)).
q-q
Last edited: Oct 25, 2014

Thanksgiving? Does that mean a Turkey? Will be there fried turkey item then? yummy