The TeamTerrarian Summer Games are an annual Terraria event brought to you by Commision Corp. Grab a friend and compete against other players in four different minigames; Capture the Gem, Racing, Scavenger Hunt, and Dolphinball! Become the ultimate Terraria Champion and win some cool prizes!

• Starting now until May 14th, signups are open for the Summer Games.

• Players will participate in teams of two and compete in four minigames with short breaks in between, plus a longer break for "halftime".

• Points will be awarded depending on how well they do in each minigame.

• Players will also receive map downloads to practice (except for Capture the Gem).

• Players will be required to join a Discord voice chat for much of the duration of the Games, except for most of Capture the Gem and Scavenger Hunt.

• The winners will both receive a $10 reward!

• All contestants are entered in a raffle for a $10 GameStop gift card.

Dolphinball is a Commision Corp. original. It's like volleyball and football in water... hence the dolphin, as you're quite literally a dolphin bouncing a ball around. To aid you in maneuvering and hitting the ball, you are equipped with a Neptune's Shell, Spectre Boots, a Shield of Cthulhu, and a Titan Glove. And the ball... is a Fungo Fish! Knock that sucker around, because Jellyfish take plenty of knockback. Score into the enemy team's goal; first to five wins!

Racing is fairly straightforward. You are equipped with Hermes Boots, a Shield of Cthulhu, an Aglet, and a Lucky Horseshoe (plus a Gravitation Potion effect for Rainbow Road). Your goal is to be as fast as possible and get as close as you can to first place! Our racing courses were hand-made by us, and are heavily based upon Moonview Highway, Coconut Mall, and Rainbow Road (this one is a work in progress, map download not available quite yet) from Mario Kart. You can even dress up as your favorite Mario Kart character! Be sure to practice as much as possible to find some neat shortcuts and sharpen your skills.

The Scavenger Hunt relies on a Terrarian's basic skill of survival, mining, and collection. We provide you with some decent gear and send you off to complete the Scavenger Hunt! The Scavenger Hunt ends after 24 minutes (1 in-game day), and points will be awraded based on how many items you were able to retrieve. You are given the world file to find where everything is ahead of time; just be wary that someone else may also be doing the same thing!

Items that must be retrieved.

A true Terrarian classic! After everyone is where they should be, teams are given fifteen minutes to prepare themselves with whatever they can find; that includes weapons, tools, armor, and anything that will benefit them in the future, and build defenses to protect their precious gem. After the fifteen minutes are up, players are free to steal the other team's gem and bring it back to win! The only twist in our version is that there are four teams in our version of Capture The Gem! Don't worry about game balance; we put Teleporters on the left and right side of the world to ensure teams don't have an unfair advantage. Ore spawn has also been amplified using TerraCustom to ensure maximum chaos!

For the sake of organization and ease of access, we put an extensive book of tips, tricks, world files and the method of play we use on our Discord server. There is a link to our Discord at the bottom of this thread.

---> Click this link! <---
You are required to join our Discord server if you plan to participate in the Summer Games. Upon signing up, you will receive the Summer Games role that allows you to view it's respective channels. We recommend you don't leave after the Summer Games; we have so much more events planned, in and outside of Terraria!

Prize
The prize this year is anything on Steam less than or equal to $10 for each winner; plus, all contestants will be entered in a raffle to win a $10 GameStop gift card!

Think we're joking? See what our 2019 Summer Games Champion BunBunWeens had to say about his prize: 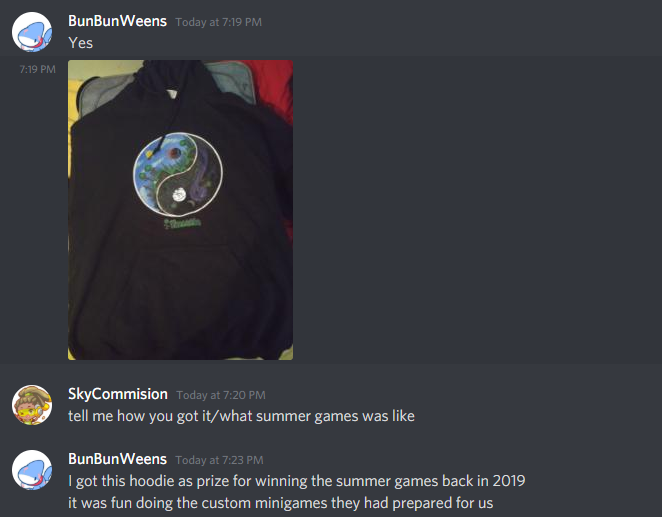 Stream
We're also going to be streaming the Summer Games! We're working to make this as entertaining as possible to fellow Terraria players; last year there were some technical issues but we're gonna get those resolved this time! You can catch the stream here.

Shortly after the release of 1.4, we are also planning to host a private multiplayer playthrough of the game that anyone can sign up for! Click here for more information. Contestants of the Summer Games are encouraged to also join TeamTerraria, and vice versa.
~-=-=-=-=-=-=-=-=-=-=-==~


What are you waiting for? Grab a friend and sign up for the Summer Games! Also be sure to join our Discord - it's required!!! Please contact me through the forums or through Discord if you have any questions; I'd be glad to assist you!

MAY THE GAMES BEGIN!