Tunnel King said:
This is a bold statement to put out as 'true' when you have no proof to offer. If you do find some proof, you should post it publicly here.

I'm not on Discord so I can't say you're wrong, but this is the sort of statement that generates wild, unsubstantiated rumors.
Click to expand...

Ah, apologies, I probably should have just looked harder.

Anyway, I found it: 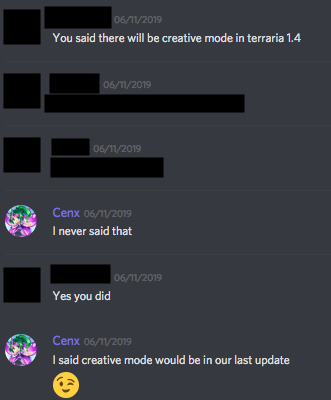 Thank you. I believe what she is doing here is clarifying what someone else claimed she said.

Since 1.4/JE is the last big update, then I don't think there's any need to stir up anxiety/worry about it.


海底精灵 said:
I am a player coming to China, I want to know if there is a Chinese language in mobile version 1.3.
Click to expand...

This Thread is for the PC Update, for Multiplatform news, this is the best place to have your question about Mobile answered along with other questions that pertain to Terraria as a whole: Terraria State of the Game - August 2019

Wow. This is insane. I really hope that the drops from the final final boss will like insanely, OP, but also that there will be like a 1 percent chance drop that lets you have infinite accessories space or something. Great work, Re-Logic!
Also, release date?

It is planned to arrive sometime in 2019, but there is no release date at this time, it will be ready when it is ready. I'm just as excited! A lot of cool stuff has been shown for Journey's End so far.

waaaaaait a second, I found something today...

uh... what?
I can think of only two scenarios.

Really? The final update? Perhaps i should not be here...

Anyone else really excited for the froggy summon

What is under the red

Spazmatism7 said:
What is under the red
Click to expand...

It's people's usernames being covered up in order to protect their privacy.

I have no words for how much I admire and love this game and Re-Logic. The worlds needs more devs like you guys. Honestly, I would buy this update. You guys should definitly make it and option to pay for it.

I have 5 years of playing terraria, i still remember when i played with my friend on a Xbox 360, Now i finally bought it on steam, thanks Re-Logic

As you hopefully noticed, we had some pretty big news to share at E3 today! During the PC Gaming Show, we revealed live to the world that the in-development 1.3.6 update is no more... the next update to Terraria will in fact be the fourth major update we have developed for the game, which we are calling Terraria: Journey's End!

For those that were unable to watch the reveal live, we have shared the teaser trailer below - along with some key details and a bit of what we expect will be your FAQ. As we always do, we have left out a ton of juicy details and other content and features that will be included with Terraria: Journey's End. Some of those have or might be spoiled between now and launch, but others will remain a secret until you have the update in your hands later this year. So, without further ado... we present to you Terraria: Journey's End!

KEY FEATURES REVEALED THUS FAR​
In case you missed any spoilers along the way (outside of the trailer above), we have created a spoiler compendium for your viewing pleasure. You can find that by clicking the link below:

….and that’s just what we have in so far – the team is going to remain hard at work over the next several months to not only perfect what we have in and planned now, but to also add in a handful of other surprises and features that we will share with everyone in the coming months. Stay tuned and watch our official Forums/Discord/Twitter/Instagram/Facebook for regular spoilers and reveals in the run-up to the launch of Terraria: Journey’s End!

Q: Will Journey's End cost extra?
A: For owners of Terraria on PC (Steam/GOG/Etc), Journey's End will be a free update - this continues our long-standing tradition of providing substantial free content to our fans.

Q: Will Journey's End come to Consoles? Mobile? Switch?
A: Eventually, yes - but likely not at the exact same time.

Q: When will Journey's End release?
A: We expect to have this update out prior to the end of the year. However, as we always say... it will be ready when it is ready.

Q: What happened to 1.3.6?
A: As we got further and further into development, we started to realize that 1.3.6 was reaching a tipping point... one where if we decided to add in a handful of big ideas we have had for some time, it would really feel worthy of a 1.X tier update.

Q: Why call it Journey's End instead of 1.4?
A: Our current plan is for this to be the crowning update to Terraria. We do not currently have any plans to tackle additional updates, outside of fixes and maybe a few tidbits here and there to shore things up.

Q: So, what does that mean for Terraria? Re-Logic?
A: Terraria will remain the vibrant and amazing game that it always has been! There is plenty more coming down the road for Console/Switch/Mobile (including some things we have not revealed just yet), and with the available mods - plus any future mods - on top of what is a VERY robust core game, we are confident Terraria will be trucking along for many, many years to come. Of course, we will stay involved with all of you - you make this possible, and we always enjoy hanging out.

are you planing to relase this update???? I am waiting 2000years for it
Click to expand...

thanks for every thing