Do i access the chest through the labyrinth?
A

Awesomegoo said:
Umm i cant use the celestial sigil because the lunar events are going on
Click to expand...

Why would the lunar events be going on?
A

Awesomegoo said:
I dont know but i cant use the celestial sigil to summon moon lord
Click to expand...

Use TEdit to deactivate the events.
A

Wait am i supposed to kill the lunatic cultist

Oh no where did you find the Cultist?! He's not supposed to be in the game!

This map is *amazing*. I don't normally play adventure maps because I fear they may be too challenging for me, but I saw FuryForged on youtube start it and I immediately wanted to try it, so I downloaded it.

I didn't find it too challenging (which is good for me, I don't know about others who might like more of a challenge; your idea about changing the availability of items for different difficulties is a good one, or having this same one in Expert mode). I did play it on my own, so maybe having to share life crystals and come of the equipment with others might make a difference. Then again, having more players around for bosses to focus on might counteract that somewhat; I can't tell

The beginning was actually rather challenging because of my greatest enemy Fall Damage. It took me so many tries just to reach the EoW arena it's rather embarrassing. Getting a grappling hook as a reward (and later fall damage negation) were the greatest, for me.

The EoW got positioned at an angle after I lowered the HP of most segments where he kept coming at me straight on and the Muramasa just *shredded* him, so that one may be a bit too OP for that fight, even if it did involve some luck in boss positioning.

I don't want to give too much away here, so I won't name things but the area where you can go to during the day while waiting for night time to face the Mech bosses was really fun to go through.

Actually, every single area is beautiful, and the representation of the non-Eucledian geometry is genius.

Now, for an issue I had which has SPOILERS (not kidding, please don't click on it if you haven't finished the map, it was a lot of fun to discover on my own and I would hate to ruin it for you!):


I found the whole colour-code and the lever room (thanks to that hint about grappling in that sign, I wouldn't have otherwise), but the chlorophyte didn't actuate, neither with all levers in the positions the hints gave nor the opposite. The chlorophite in the other area up top didn't actuate, either. I'm assuming that's what was supposed to happen, I may be wrong, though; but since that's what happens when you get all the diamonds placed in that other area and it's the only thing that stands out here, it's what I expected to happen.

Is there a chance something broke with the wiring, or am I missing a step, or is something else supposed to happen? There's a chance I made a mistake in the colours even though I double-checked (on the map, this time; I had made a mistake initially, due to the pillar effect affecting lighting in one case) so I can send you a screenshot of the levers if you want so you can check if it's my error, or if it has to be something else.

(Initially I had included all the details, a table of the colours, and screenshots in this spoiler tag, but thought that was *way* too spoilery even for a spoiler tag so I decided to mention just the basics; but I can send you more details if you need.)
That is the only thing I found that either isn't working as intended, or I don't understand how it's supposed to work.

Thank you for making and sharing such a wonderful map!

EDIT: Actually, I remembered one more thing! Is only one circle supposed to open in Plantera's arena after defeating her (besides the one you access with the temple key), even though more than one has a marble chest in it?
Last edited: Dec 19, 2017

Thanks a lot for taking the time to write some feedback, ringspells!


I just messed around with the lever room, and yeah, there's currently an inconsistency. Crap! Sorry about that. If everything else matches, you should be able to pull the lever on the 2nd row, far right to solve the puzzle. The fix will get uploaded with the next update. Thanks for the heads-up!
There are multiple switches in this level. I'll make them a little more obvious in the next update.
I'm really glad you enjoyed it! Yeah, I wanted to make the difficulty accessible for most people. It's tricky to balance though, since everyone seems to have their own unique set of stumbling blocks in terms of skill. I've been told "it's too hard" and "it's too easy" in regard to the same battles/stages before. So for now, this will be the "easy" version, and I'll get to work on an Expert version later on.

Thanks again, and let me know if that lever room temporary fix doesn't work!
A

To avoid any spoilers to any person can i DM someone if I need help?

Thanks, Feistygandhi, that did indeed make it work!

After that I found and issue and something I'm not sure should be there (again, SPOILERS): 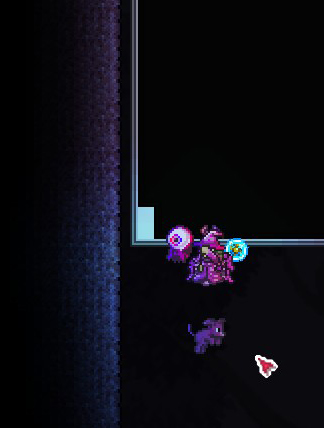 I couldn't get out down through there without mining those blocks. I still had the tiny pickaxe from Plantera since I forgot to put it back, so I mined them. You may want to remove those two blocks (and there's no way around it until you actually get through there, don't want to say too much but I'm sure you can tell why that is). 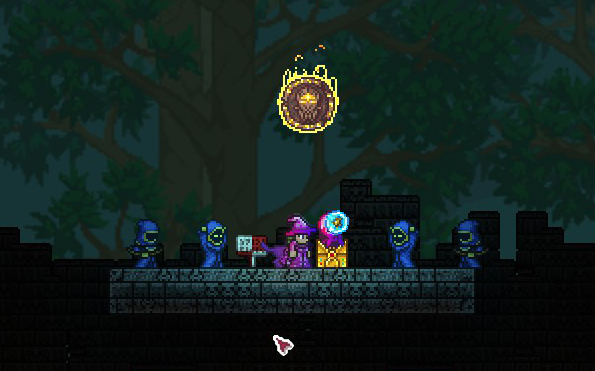 Should these guys be here? IF yes, then please disregard; if not, you may have to change the blocks to something other than dungeon blocks (though I don't know if that might make them appear on another set of dungeon blocks elsewhere in the map).
I don't want to tell you how to make your map, but maybe you don't need to make them obvious, maybe you could put a sign next to each one with a number, or even 1/4, 2/4, etc (not necessarily 4, but however many there are total), or do you think that's too big a hint?


In regard to that squeezing through section... I just now tried it. It was difficult, but I was able to jump and wiggle a little, then grapple the left wall to lower myself into the open area. Also, dashing with the Tabi seems to drop you down a tile when you're stuck like that. Did you try these methods? I'll change it if you did and it still didn't work.

OMG the Cultist has been misbehaving throughout the entire development process. My original plan included him in it (he's one of my favorite boss fights) but I couldn't get him to spawn. And later I tried adding him to this particular spot as an extra side-battle. Apparently he'll spawn there now?! I'll do some more testing, and see if it's possible to do the Lunar Events.

Thanks again for being a guinea pig! And for taking the time to communicate these issues. I really appreciate it!

I tried jumping to reposition and grapple to the left wall to no avail, it left me stuck inside the left wall no matter how far to either side I moved before grappling to the left (I spent a long time trying that before resorting to mining the blocks, actually) but I didn't know about dashing dropping you down a tile; I replaced the blocks and dashed to drop the last couple of blocks and that worked perfectly! So that one was definitely player error, no issues with the design.

can i dm someone about the secrets in this map? i probably overlooked something and i cant seem to find the place

Thank you to everyone who has patiently worked with me to fix the many broken parts to R'lyeh Nexus! I have implemented multiple fixes, suggestions, hidden extras, and a special "end" to the big secret arc. Of course, if you still discover new problems/potential for improvement, or if you have any questions, feel free to contact me!

I hope you all have an awesome Christmas! Thanks again!
T

Am I able to sell stuff or just buy(from specified npcs). There's no place it says I can or cannot.

TheHamburglar said:
Am I able to sell stuff or just buy(from specified npcs). There's no place it says I can or cannot.
Click to expand...

Wow, I guess I should specify that. Haha. Yeah! Sell anything you want! Maybe not Temple Keys or Large Gems though.
X

Question about the map:

I have defeated moon lord, but I cannot find some of the diamond gems. I also am wondering the use of the colored patterns spread throughout the map.

Xeryph said:
Question about the map:

I have defeated moon lord, but I cannot find some of the diamond gems. I also am wondering the use of the colored patterns spread throughout the map.
Click to expand...

The Diamonds are all in the main hub area, and most of them are behind the white-painted brick.

Hey Gandhi... I love your maps and I'm trying to get into game design... Could I make a game out of your maps(Red hat and this one?), I'll be giving you all the credit for it but, I can easily imagine these maps as their own games... so it's your choice ,for these are your maps.
You must log in or register to reply here.
Share:
Facebook Twitter Reddit Pinterest Tumblr WhatsApp Email Share Link
Top Bottom