Some towns/bases I've been building, 1.4 style

So, now that apartment buildings have been panned by the Homeowner's Association, I've been doing up little bases for my NPCs in various biomes. Still have a few more to do before I go for Hardmode, but I figure I've got enough to post a thread:

The pit outside the door is a penguin trap, and yes this is my surface-snow fishing hole. The Painter is currently off at the Graveyard, but he's got a studio and loft here.
And speaking of the Graveyard... I'm not completely happy with the shaded glass, but I wanted the whole space walled off. This one actually was a Meteorite crater before I mined it out and "refurbished" it. The graveyard does leach the color out of everything.... 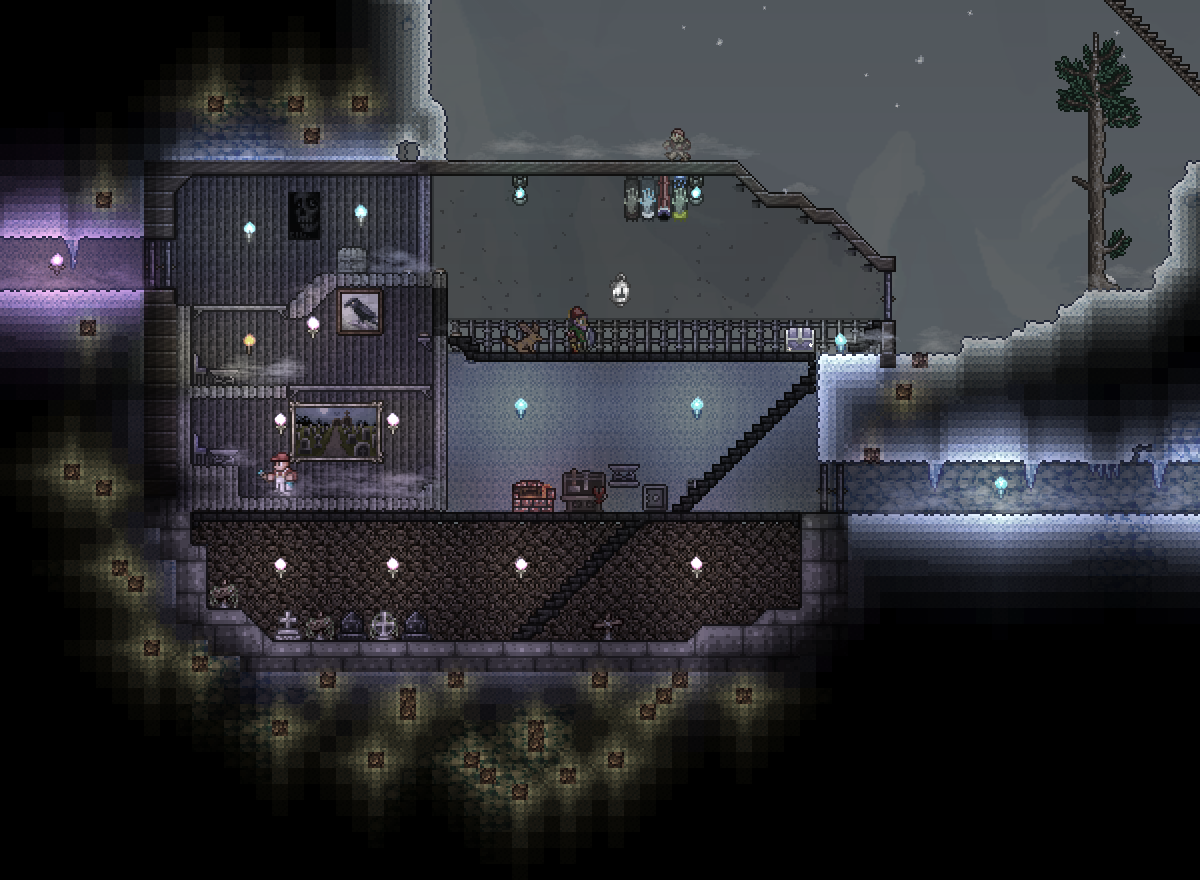 This is directly under my main base, close enough that I may move the Cavern pylon elsewhere once i've got teleporters. As it is it's a quick run down the rope. Note that the houses are all outside crowding range of each other, though in some cases it's close. 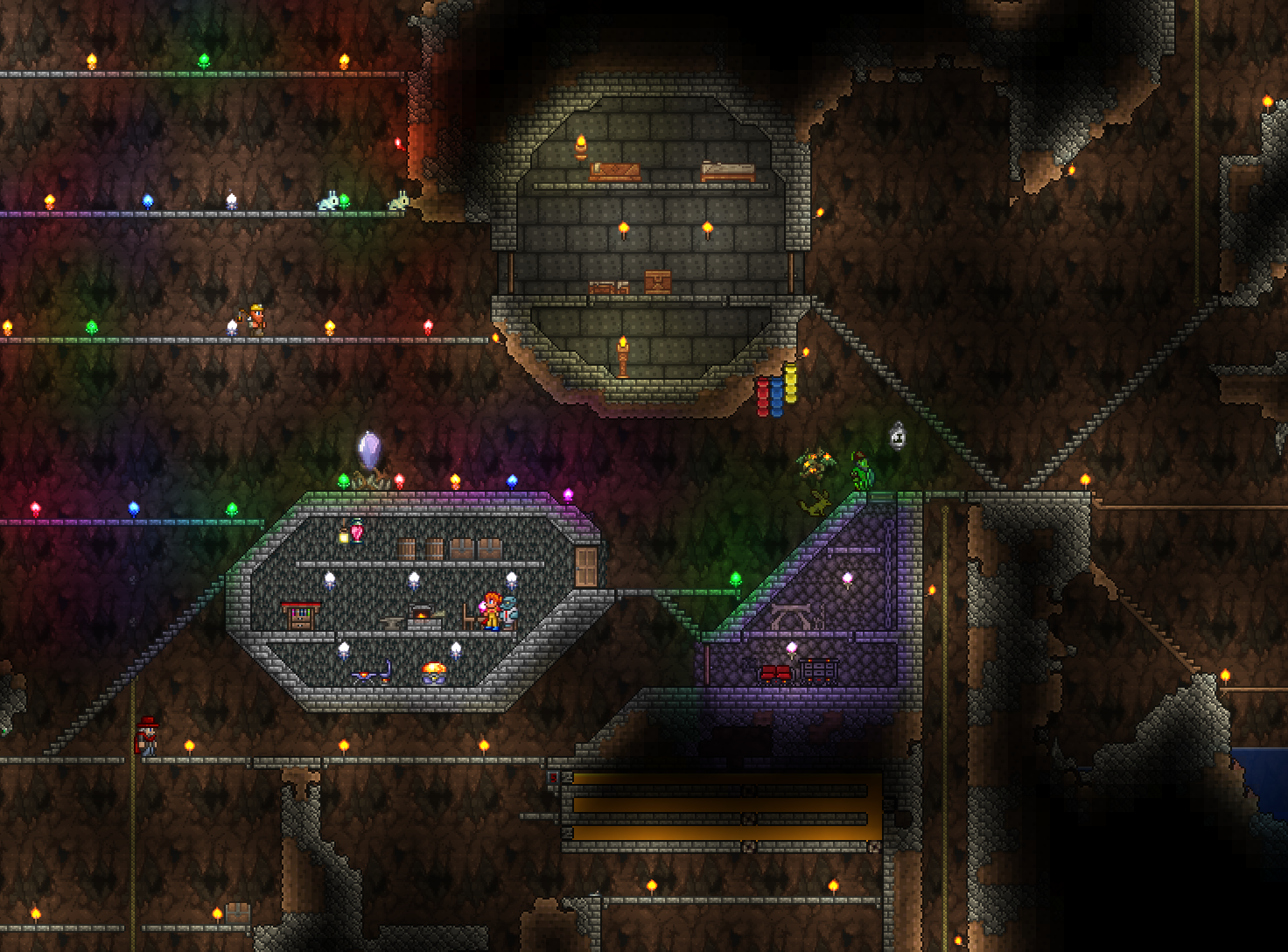 The Mechanic is visiting her sweetie... The pink candle she's passing was meant as a gift for him -- when triggered, it's supposed to blink ILU in Morse code. Alas, this turned out to be both noisy (dart traps) and to push the 5-second timing -- but he understands, not every invention works out perfectly. And if you think the Demolitionist's house has a familiar radius, there's a reason for that.... ;-)
So, my Jungle and Main-base images turned out to be too big for the server, I'll be back later with less sweeping views.
Last edited: Jun 24, 2020
M

My main base, not so much designed as evolved. The most recent expansion gives me some extra space for Hardmode needs. ETA: replaced image with a wireless one.

Nurse is in my bedroom as usual; originally the Arms Dealer was in the room between with the Void Vault, but the Merchant was feeling crowded, so I gave the Nurse's bad boy his own place out of the way, and now the Merchant's buying my stuff for 125% of book price. Yeah, I see that rope to my back door, but hey, I'm not jealous! ;-) That said, I may yet send him back to the Desert once I do a new base out there. 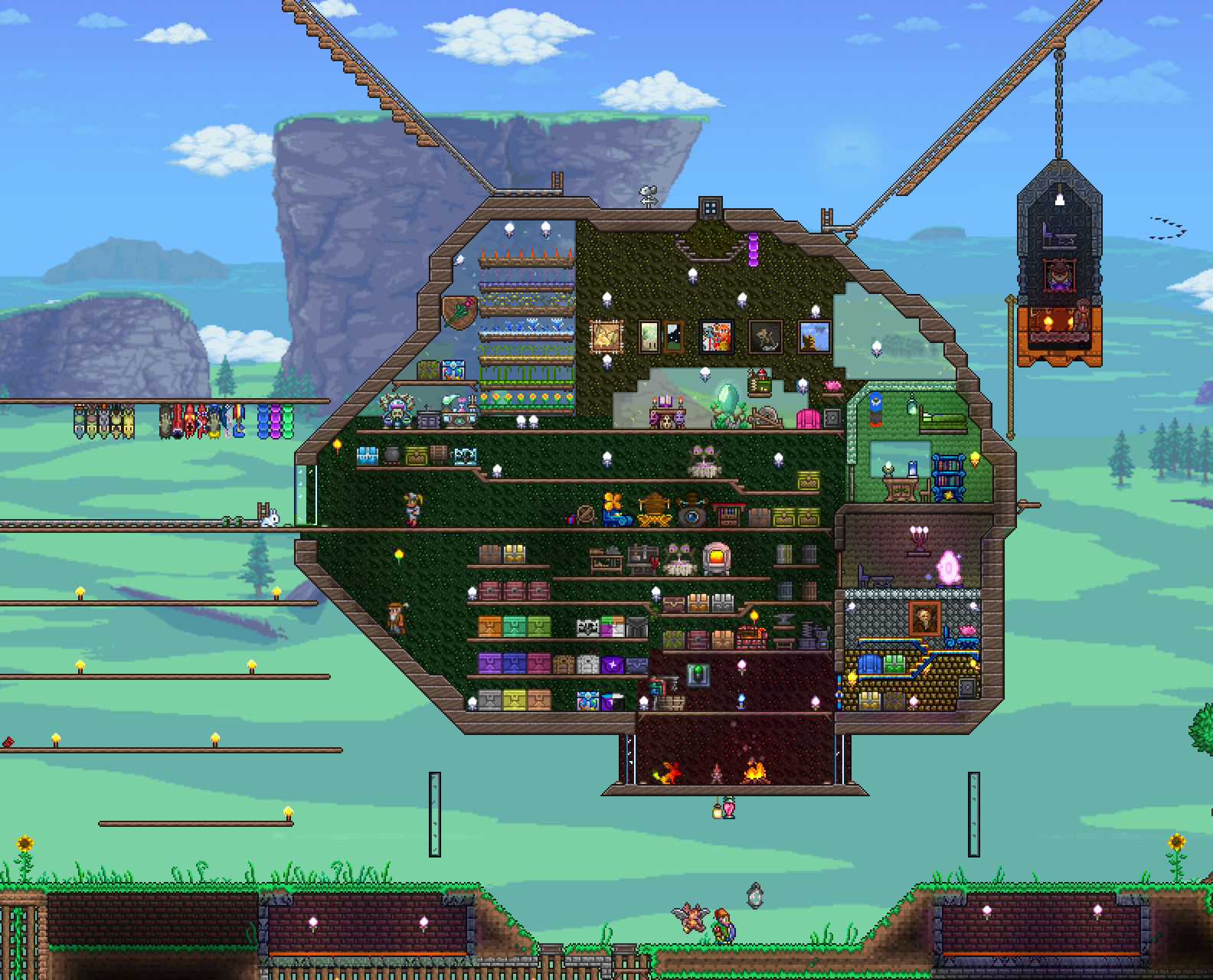 And for the heck of it, my little shelter at spawn: 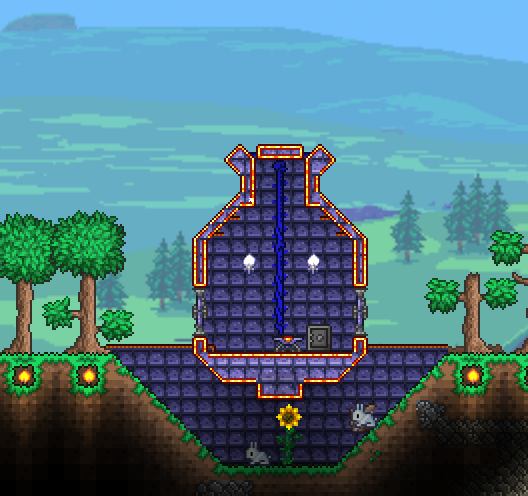 My Mushroom Pylon is down near the Underworld.
The Guide on seeing his new digs: "Oh come on, now you're just messing with me aren't you?" 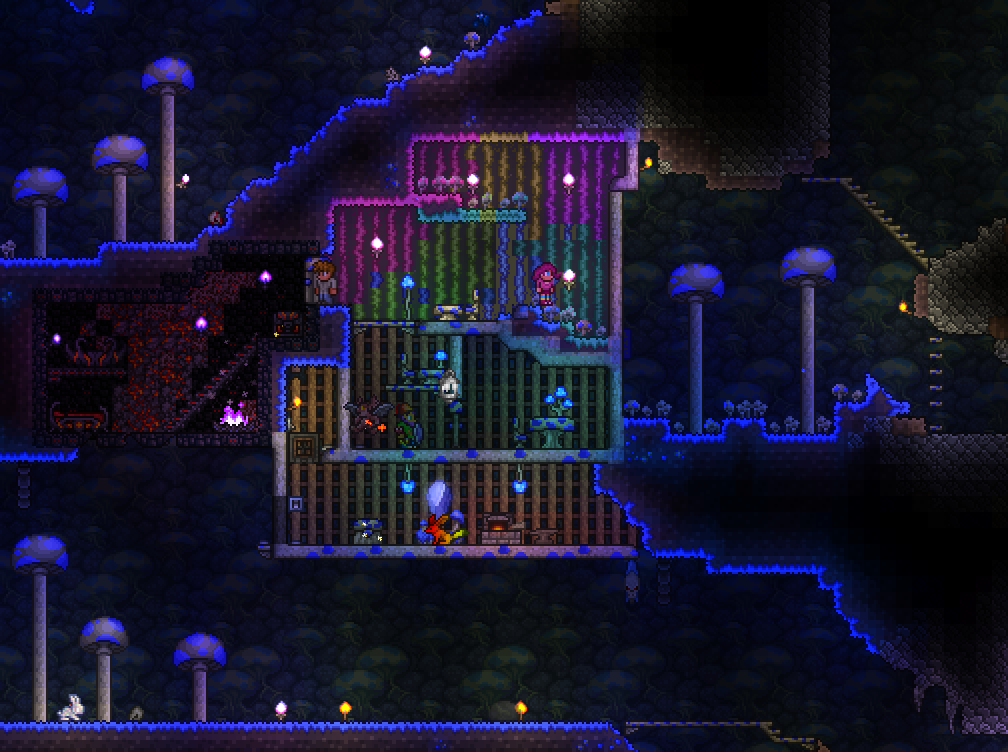 Here's the Temporary Jungle digs until I get around to the big-tree build. The vertical area has Ecto mud walls because the bats and such were getting annoying -- you can see the borders where I left off there. 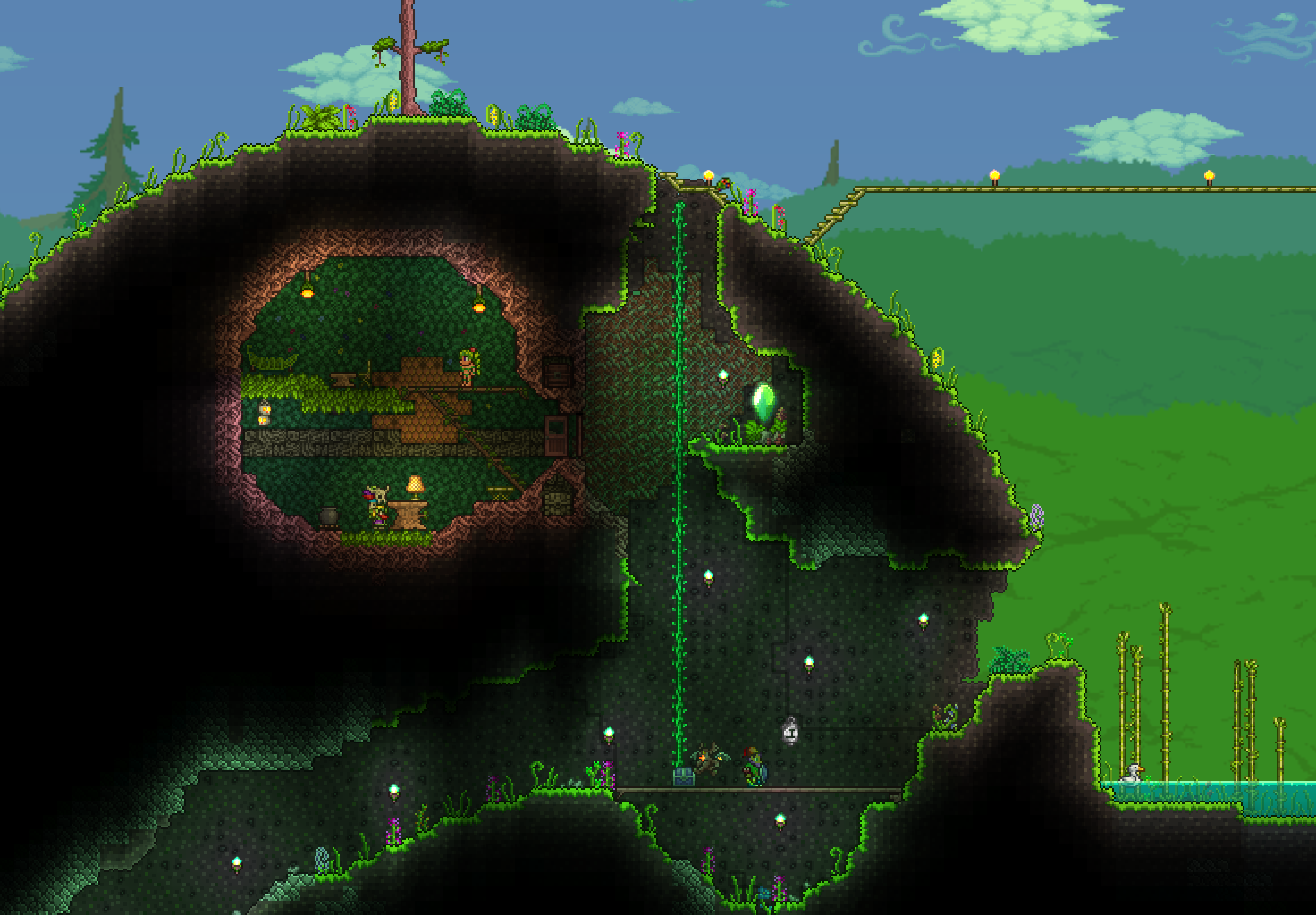 The water to the left is actually my Jungle fishing area -- it runs all the way across the main Jungle valley to the Surface Mushroom area (which is not really worth a picture), and the sheer length makes it big enough to be fishable. (OK, I did have to join up the water and deepen it a little.)
And my Desert setup, old and new buildings next to each other. Gonna need to do something for the other desert too, just in case.... need more Hellevators there too, sigh. This one isn't really custom for the inhabitants, but I was playing with the new Sandstone options. Yeah, that's my fishing oasis. 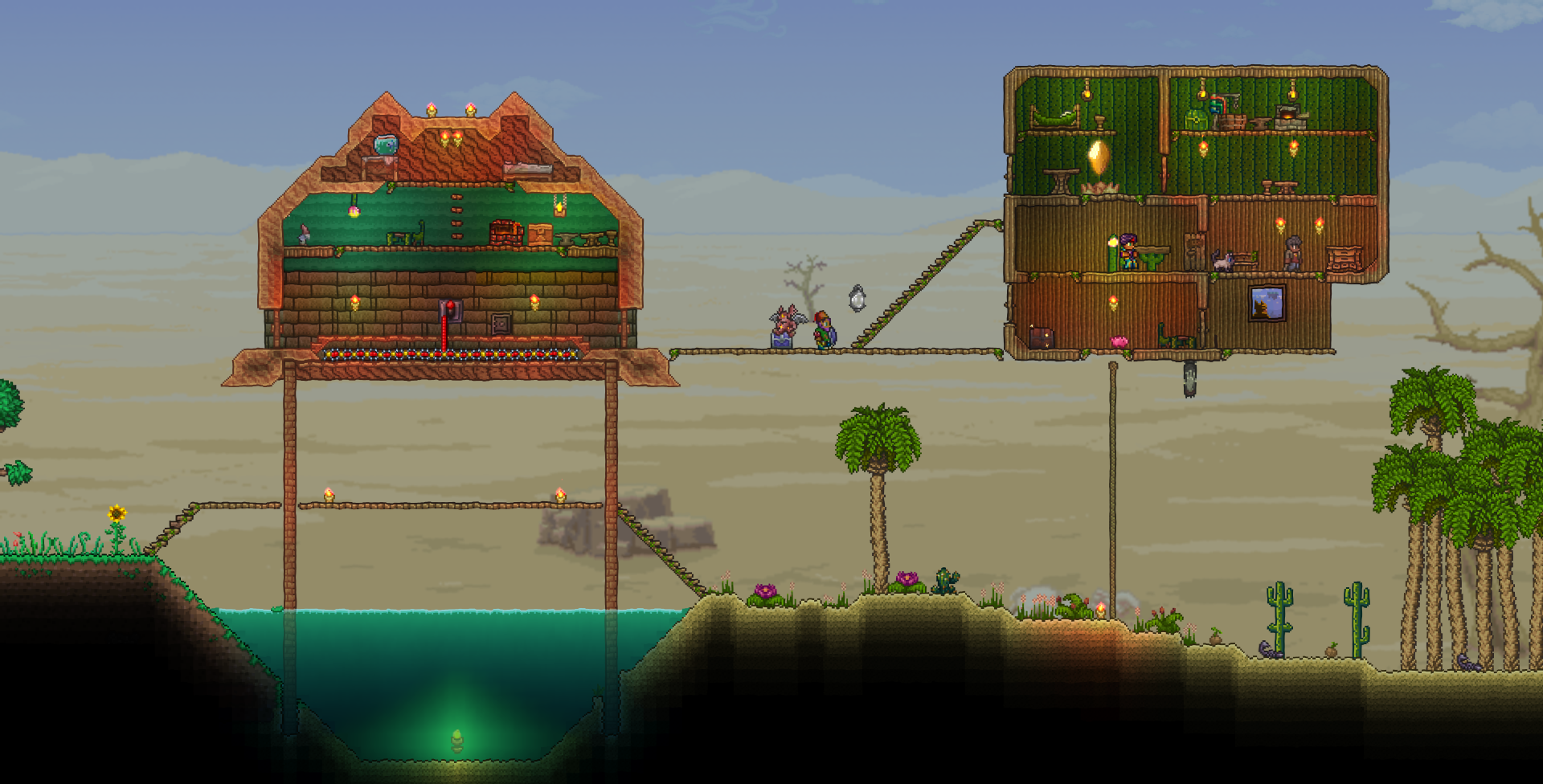 And, at long last, after many stacks of both regular and mahogany wood, who-knows-how-many banners, and three gold frogs... my Jungle build: Treeception!

I will of course be continuing to tweak it as I continue to play, but at this point this is a fully functional base. Not great for actually fighting an invasion, but the fully-walled section does seal up (the pictures show the bottom open), as do all the passages to the outer sections. That bottom area is still fishable, too. Some finishing touches do need to wait for Hardmode: A couple of spheres are waiting on Hardmode seeds, and I will be replacing most of the pressure plates with player sensors once I get them.

I had to use GMP to resave the picture in compressed form, let me know if there's any visible problems from that. 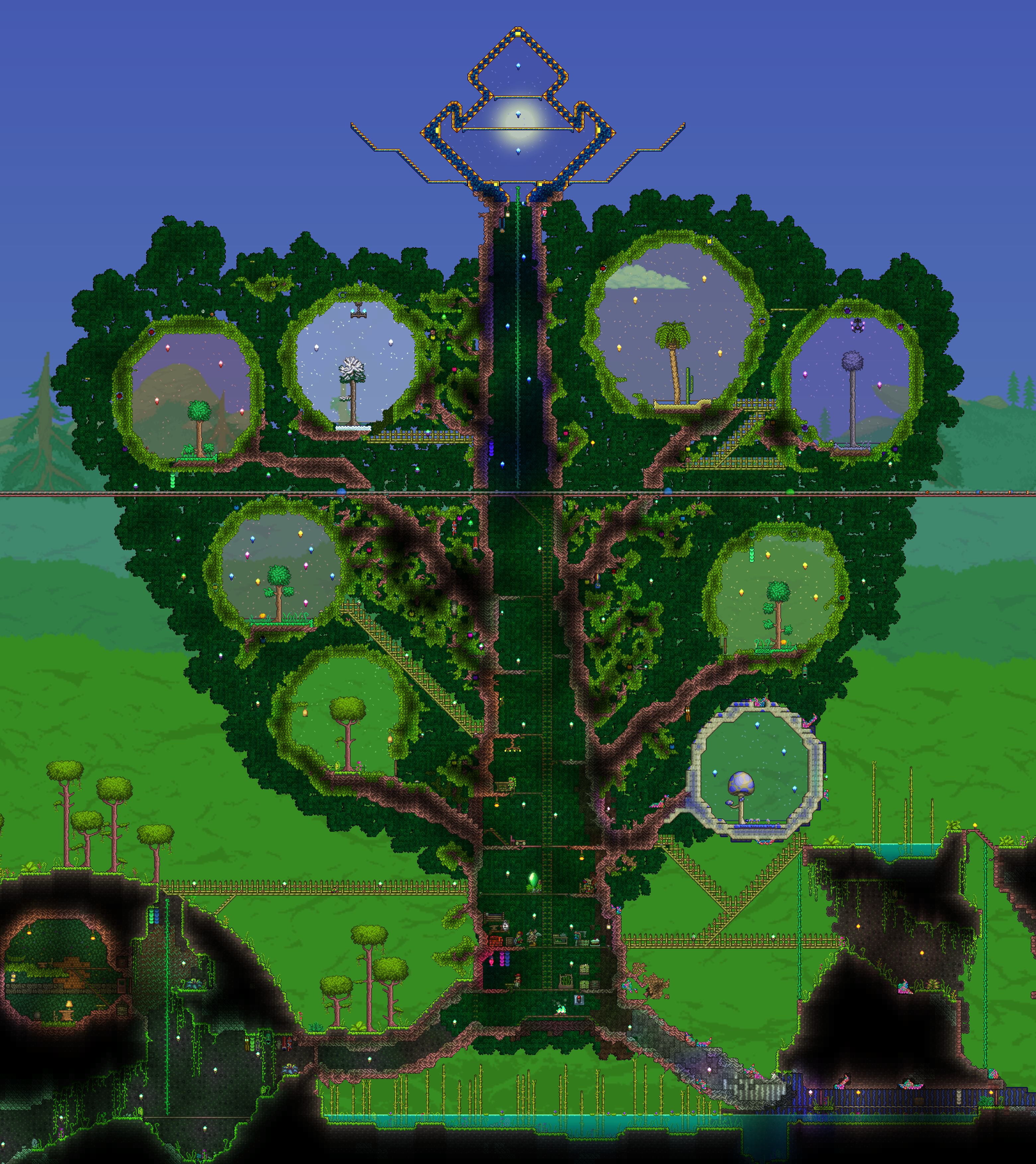 Note that the mushroom sphere (and only that one) is actually in the Mushroom biome, courtesy of my Surface Mushroom patch which is off-screen to the right. 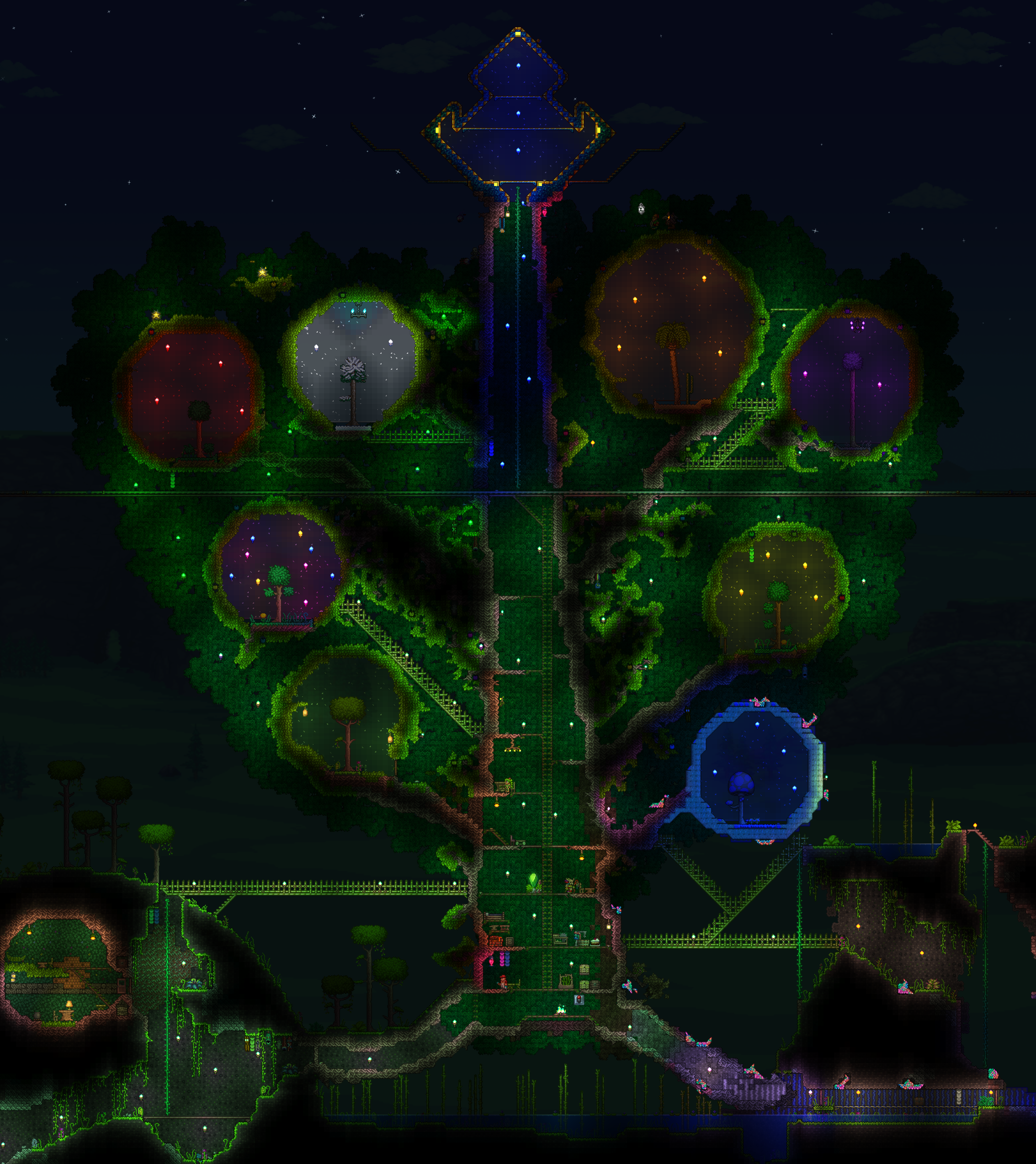 I'm really loving this. Good job! The Treeception is both really unique and beautiful.
I also really love the simplistic design in your creations.
M

Raverrian169 said:
I'm really loving this. Good job! The Treeception is both really unique and beautiful.
I also really love the simplistic design in your creations.
Click to expand...

Thanks! This is the biggest single build I've ever done (it's not quite Surface-to-Space, but close) and it took me a good two weeks realtime of heavy play. The day-night cycle and storms became a real annoyance; I can see why Khaios and his crowd use mods to kill that, but I'm not quite ready to start getting into mods for Terraria. (I was also interrupted by a few Blood Moons, Slime Rains/King Slime, and Goblin Invasions.)

I personally think full realism is beside the point in Terraria; I've still taken some tips from Khaios, but I don't have the patience for his level of detailing, so I basically try to go with something that looks natural for the game, working with the available textures. For this one, you can see where I was fighting the blockiness in some places, like in the fungal root; I gave up on painted Moss walls because they checker too badly. Indeed, I have discovered that even among the "natural-type" walls and blocks, there's darn few that don't stripe or checker badly over large areas. That's why it's all Living Leaf walls instead of Grass or Flower walls.

I also did want something that would function as a base through Hardmode, and I think I got that. Not a great arena, but like I said above, it can be locked up pretty well, and it does seem to do okay at channeling enemies into kill zones. I may yet fill some of the branch crotches with lava to deal with invaders in Hardmode, but for now I didn't want that glaring glow disturbing the jungle night. I'm also aware that the Hardmode stripes may swat some of my spheres, but the vulnerable bits are all small enough to fix easily, and even if the Jungle gets Corrupted, this base will be mostly unaffected. I debated with myself about walling in the spheres, but the thing is, Scorpions in the jungle are cute, Ice Slimes not so much, let alone the Hardmode spawns. ;-)

I've created something I call The Rave Palace, which is an elaborate water palace like structure
And I've hooked up all water fountains to it to where it allows you to create MANY different repeated hue cycles of the nearby bodies of water.

I commend your insight! I too like to change and exchange how something looks!
Stardust furniture in negative paint, looks rather extraordinary.
M

Raverrian169 said:
I've created something I call The Rave Palace, which is an elaborate water palace like structure
And I've hooked up all water fountains to it to where it allows you to create MANY different repeated hue cycles of the nearby bodies of water.
Click to expand...

Do you have a thread showing that? It sounds like it would be better shown by a video than still images, but you could at least show how you're wiring it.

So I'm by no means an expert, however I feel like showing the world my own style of designing. I explain my entire method at the end and I hope that my creations inspire you! :D

So I'm by no means an expert, however I feel like showing the world my own style of designing. I explain my entire method at the end and I hope that my creations inspire you! :D

It does look interesting, but a bit of video advice: if you're showing off your builds, you might want to zoom out a bit so people can see more of them! ;-)

Give angler a house in hell
M

Angry Bones said:
Give angler a house in hell
Click to expand...

And I like the Angler. He's got a nice little shack with the Golfer to keep an eye on him.... I didn't include it before because it's crowded and messy, but: 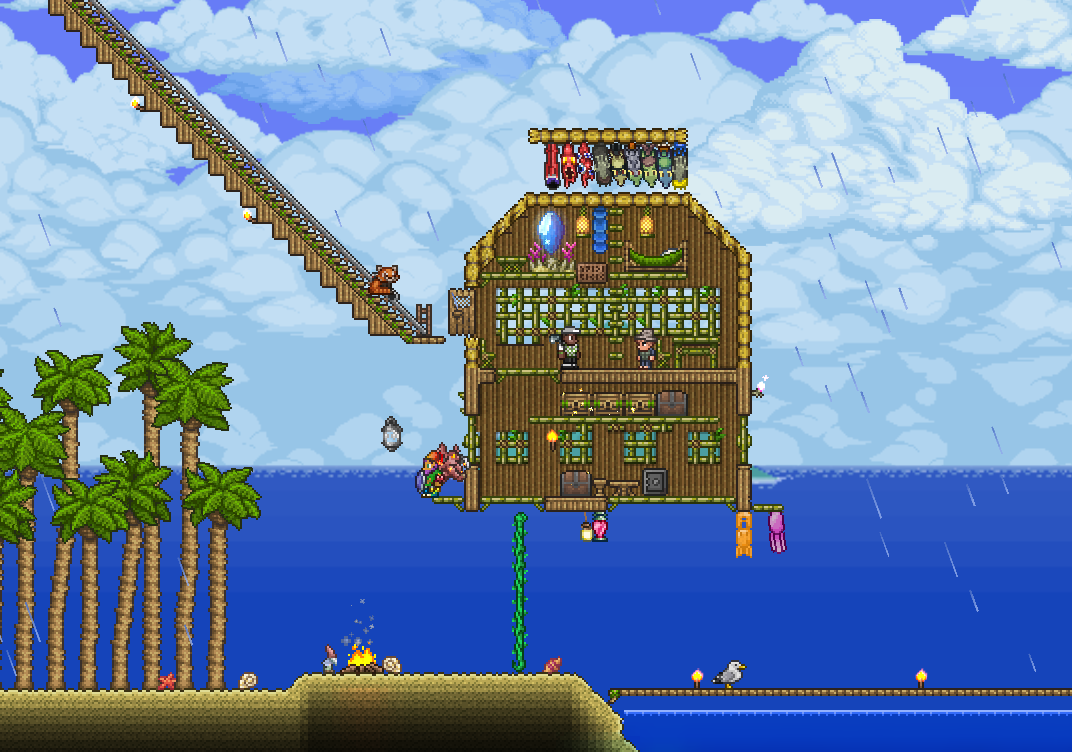 And while I'm over there, my little refuge on the Ocean bottom, good for shark farming and such. Also caps a hellevator.
Huh, that's a lot tripper than I was expecting (the upper roof and floor are in fact flat).... there doesn't seem to be an obvious option for turning off that underwater wiggle, anyone have ideas? 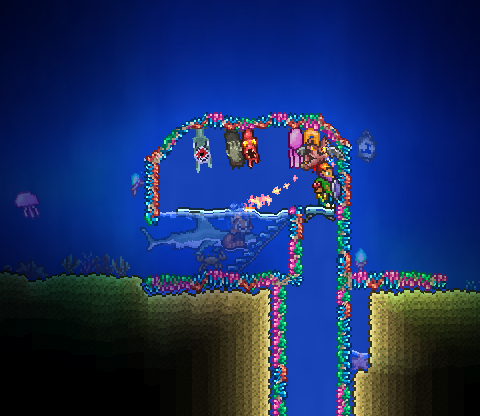 And now that I've reached Hardmode, Treeception is complete! 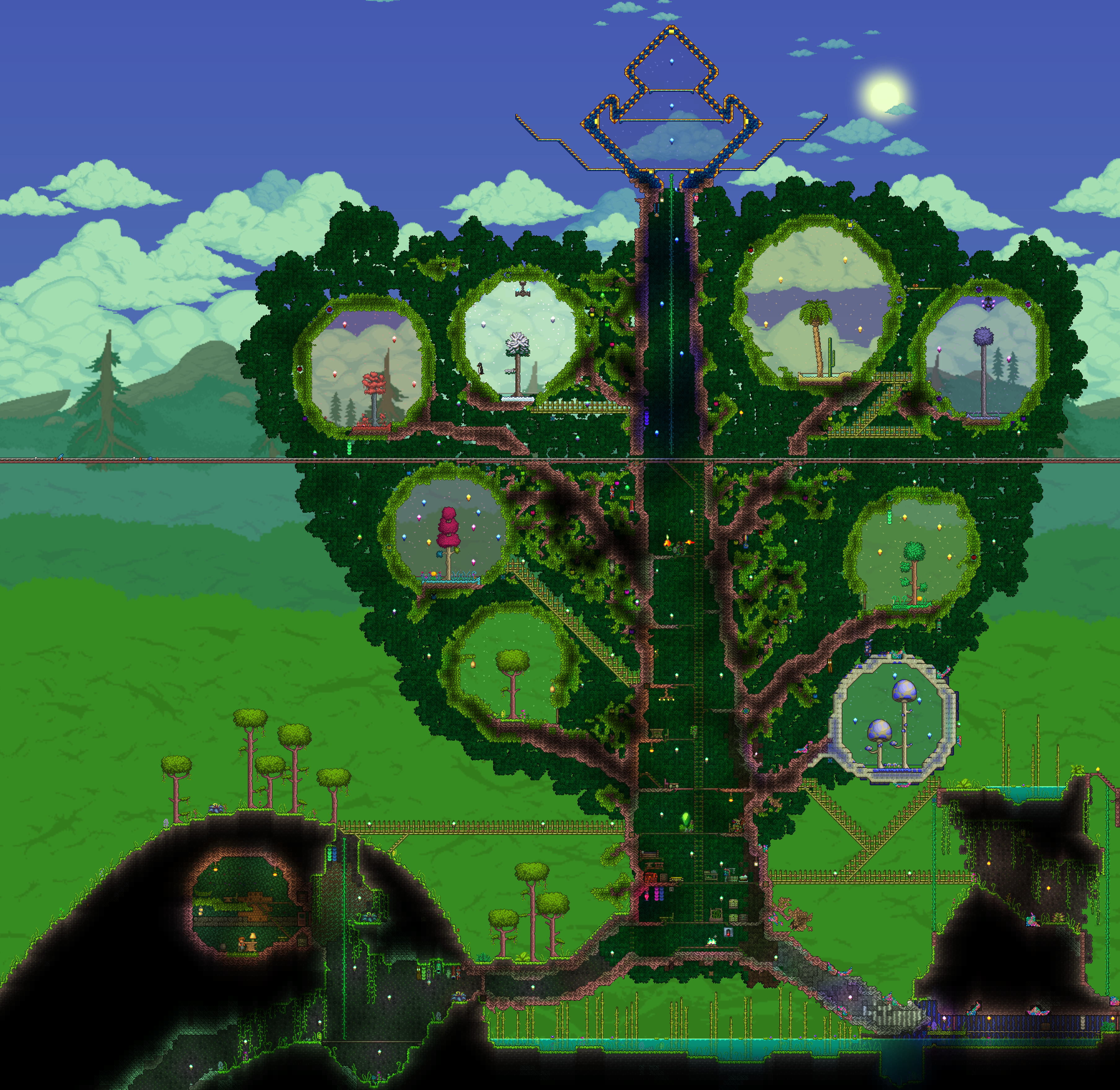 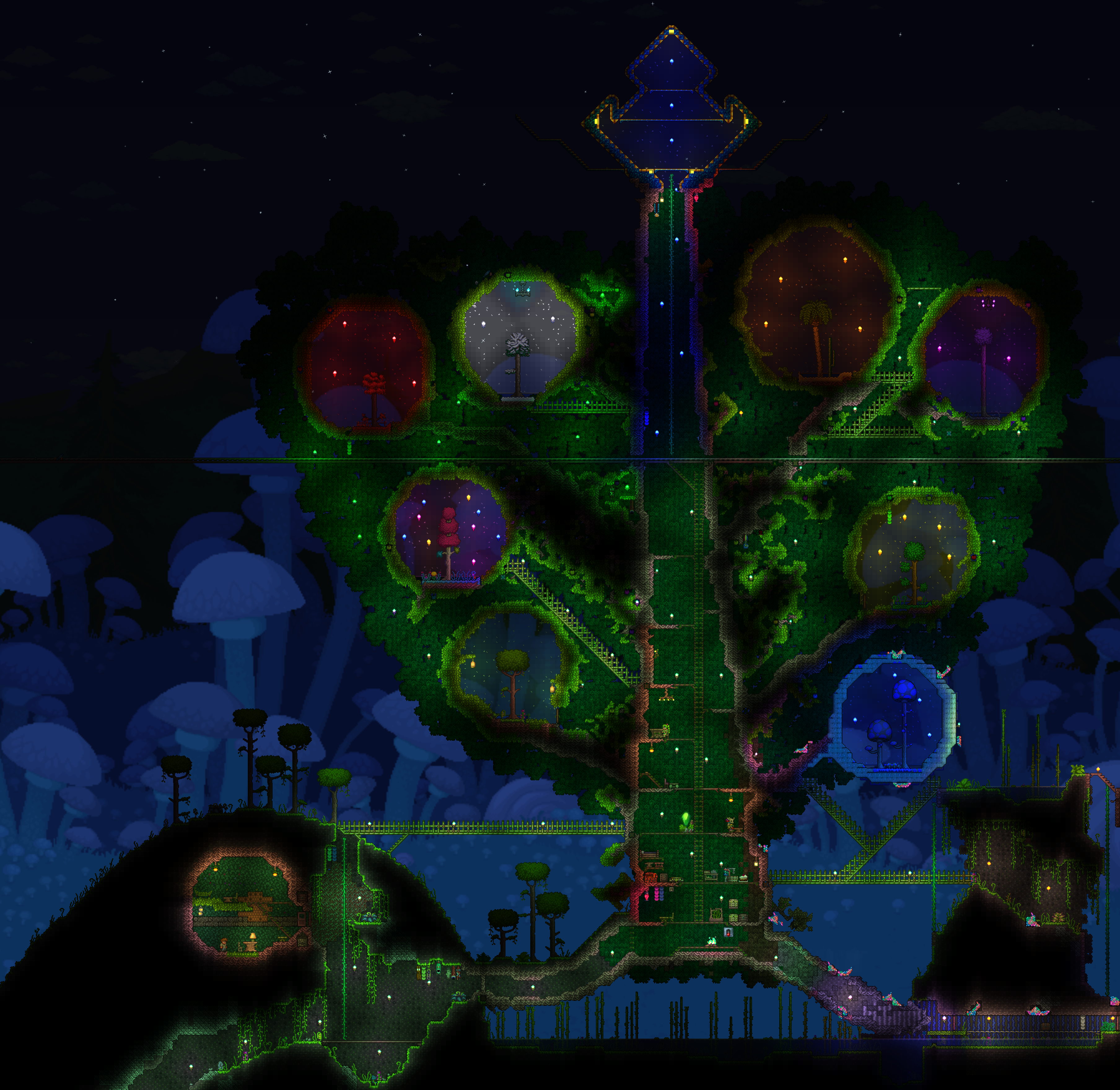