I think "Luna nueva" is better.

The item "Bacon" isn't "Beicon" in spanish, it doesn't exist that word. It should be "Tocino".

When the weather is clear, the Weather Radio says "Borrar" but it should say "Despejado". "Borrar" is the verb "Clear" or "Delete".

The item Blessed Apple is translated as "Mandana Bendita", when the correct translation is "Manzana Bendita". Probably a typo.
The debuff description of "Infierno maldito" (Cursed inferno) is "Te succiona hacia la Boca" which should be the description of the "The Tounge" debuff. The correct translation should be "Perdiendo vida" acording to the english description.
[doublepost=1513620584,1513620361][/doublepost]I'd like to ask if it would be legal to use the Terraria Localization Packer tool and make a better translation avilable while the devs are focused on other things.

-The tooltip name for the mob-spawning portal of the old one army says "Postal". 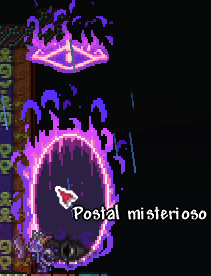 -Both glass and crystal furniture are translated as "XX de Cristal" in spanish.

-Pixies should be called "Hadas" instead of "Duendecillos". Even their drop is "Polvo de Hada". Duendecillo sounds more like an imp than a fairy.

-The control configuration screen shows Grapple as "Agarrar". With no context, you will not understand what it is supposed to do. I suggest to switch it to "Gancho". 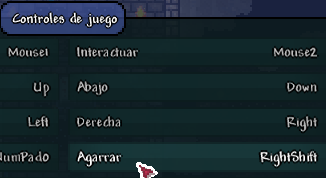 -Most of the D-Pad's config UI is untranslated. 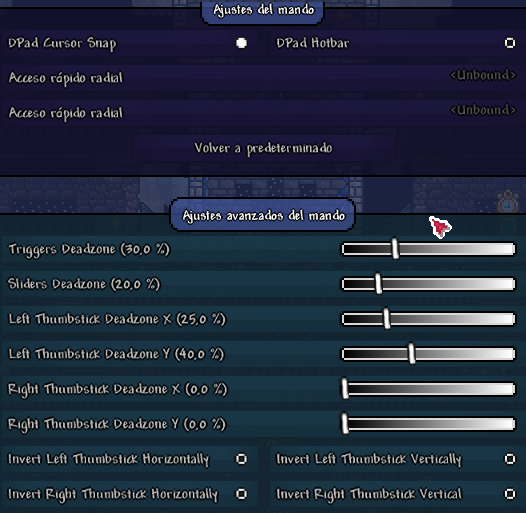 -Oddly wide space on the 10.000 number of the "Bulldozer" achievement.

-Since Terrarian is a yoyo's name, it should be capitalized. This is not the case in the achievement's description for obtaining it.

-Achievement description for Truffle moving in fails to describe that a surface mushroom biome is required.

-Achievement description for maxing out your health & mana is unclear of its conditions. I would translate it as "Consigue el máximo de maná y de vida sin contar accesorios ni bonificaciones".​

-Tin is detected as "Aluminio" by the metal detector. It should be "Estaño". Tin-Foil is aluminio (No screen for this, sorry).​

-And even though this was mentioned before, I saved it for last because it's probably the worst offender: RAPE. The angler is actually called Rape, which is a species of angler fish! The angler should be "Pescador" in spanish.

-----
Now as a bonus, some screens of already-mentioned issues that either have no picture, or the existing one is no longer available.

Only one piece displayed, but that's the format. "Para la Selva" just sounds off. Also, instead of the previously suggested "de la Selva", I think "Casco Selvatico", "Camisa Selvatica" & "Pantalones Selvaticos" is a way better format.

As previously stated by @칸나, almost all robes (including endgame mage armor) have been translated as "Vestido" instead of "Túnica". "Vestido" in spanish are skirts, whereas "Túnica" describes the kind of ceremonial robes often used on religious events.

Yep, as previously stated, it has The Tongue's debuff description. The name appears to be right, however (Averno is synonym to Inferno in spanish). 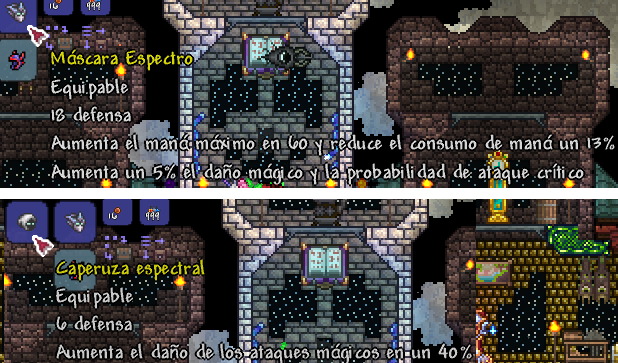 The correct translation would be Espectro. Sure, Espectral sounds better, but it conflicts with the now-retired Spectral Armor from console. Remember that even though it is no longer an armor, it still exists as vanity. Most spectre-tier items are translated as Espectral right now, including the paint tools.

As previously stated by @칸나, not only it conflicts with the achievement's description, it just doesn't make any sense to use "Multicolor" instead of "Arcoíris" (Rainbow).

As pointed by @Dwcels, this is an erroneous name. And as @칸나 said, it should be "Pez Especular", period. 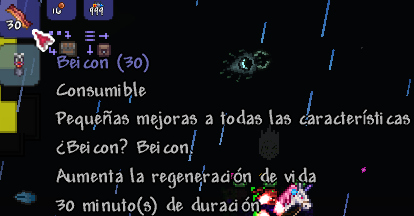 As @Melster said earlier, if there are actually people calling "Tocino" as "Beicon", they are probably just memeing the word. Bacon has been "Tocino" for as long as I can remember, and I'm 36. 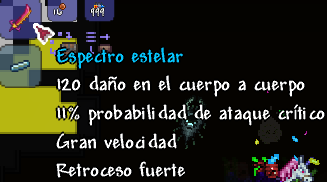 As stated by @칸나, translator probably read "Wrath" as "Wraith". It should be "Ira de las Estrellas" o "Ira Estelar" (not "Furia", because that's used by Starfury). 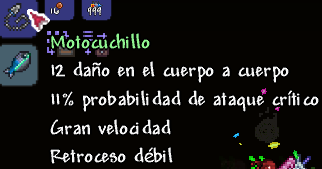 The translator was probably thinging of a chainsaw when (s)he wrote that name. In my opinion, "Cuchilla de Cadena" should be a good translation.

Should be "Mundo" instead of "Mudno".

I disagree there. The game calls them "Casillas" when loading a world, and I think it's a fitting name. Not all tiles are blocks after all, yet they all fit within a specific set of tiles.
Last edited: May 10, 2018
F

I am very confused with someting about the spanish translation on Terraria, the "Spectre Armor" (with the hood) reduces magic damage by 40%, the problem is, that the spanish version sais that the hood INCREASE the damage by 40% and this can be very confusing for someone that doesn´t know this. I hope the people of re-logic can solve this problem.

I seriously doubt that's the intended context for that enemy.

Another find. Columan > Columna. Forgot to check the other pillars to see if they also had the same typo.

Kojiro_S said:
Another find. Columan > Columna. Forgot to check the other pillars to see if they also had the same typo.
Click to expand...

Nah, the other pillars are ok.

Aside from issues previously mentioned in this thread which I've found yet unfixed, for now I've found two more:
- The description of the achievement The Frequent Flyer reads in English: "Spend over 1 gold being treated by the nurse". However, this is translated as "Pasa una hora siendo cuidado por la enfermera", which means "Spend 1 hour being treated by the nurse". This mistranslation is utterly confusing and nonsensical, since you can't even measure the nurse's healing in time as it's instantaneous. The translation should read: "Gasta uno de oro siendo cuidado por la enfermera".
- "Ancient Cloth" is mistranslated as "Ropa antigua". Ropa is clothes/clothing, whereas cloth is tela/tejido. More specifically, the translation should be either "Tela antigua" or "Tejido antiguo", although the former is more fitting for this item.
Last edited: Feb 29, 2020
You must log in or register to reply here.
Share:
Facebook Twitter Reddit Pinterest Tumblr WhatsApp Email Link
Top Bottom