I've had some reports that my mod causes people to be unable to open their inventory when my mod is installed along side some others. I was able to reproduce the bug and found out that it was my vanilla recipe changes causing it, as disabling the option prevented the bug from occurring.
Because of this I have regretfully removed the vanilla recipe changes from the mod for the time being, though any new recipes for items that lacked them have remained in the mod. I may bring them back in the future once I use a better method to change them, however the future of the "change"s part of my mod is uncertain at this time.

Announcement:
My mod has been slightly renamed:

This is due to the removal of all the vanilla changes, and the reason for this is that most of the changes really didn't add anything to the mod and a lot of them were just small stats changes.
You can however enable the changes if you go to the config options as I have left them there as a legacy feature for now

As of the new update released yesterday they have been fully removed from the mod.

How did you change the mod name's color to teal

How are you so good at this!?

I'm not that good, compared to other larger mods.

Also I've started a wiki, still a big WIP and anyone can help out with it: 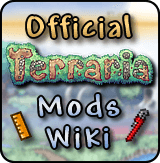 You have still done some really cool stuff in your mod though, adding unique enemies with their own AI as well as a lot of the weapons you've made is really cool and you should be proud of it.

The Floof said:
You have still done some really cool stuff in your mod though, adding unique enemies with their own AI as well as a lot of the weapons you've made is really cool and you should be proud of it.
Click to expand...

The current enemies just use vanilla AIs with some modifications and projectiles added to them as I haven't really looked into enemy AI all that much. But thanks.

even just some slight changes is impressive. Coding is no simple task so the fact that you figured out how to do that is pretty amazing to me.

I finally have added all the relevant information to the wiki: