After getting inspired by a post elsewhere of someone recreating SMB's 1-1, I decided to steal their idea 1:1 (heh) and add a couple more features to make it more golf-like. 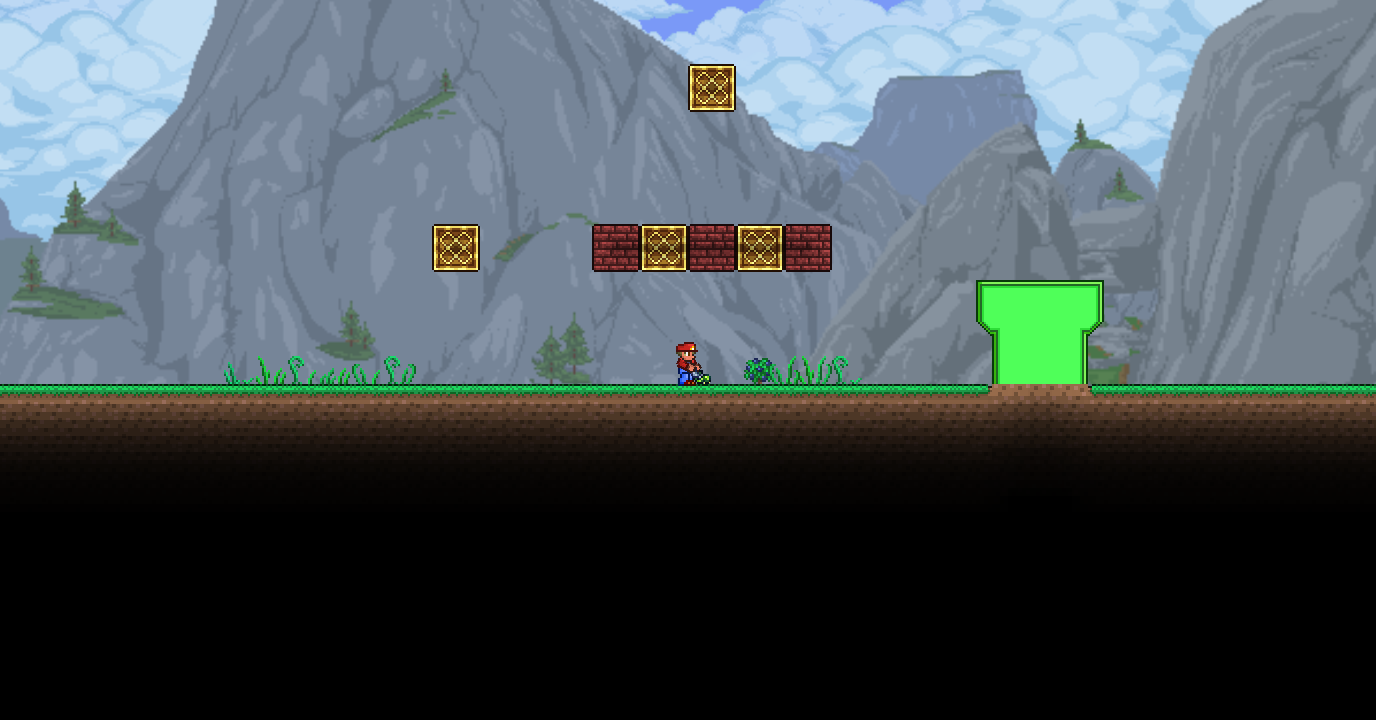 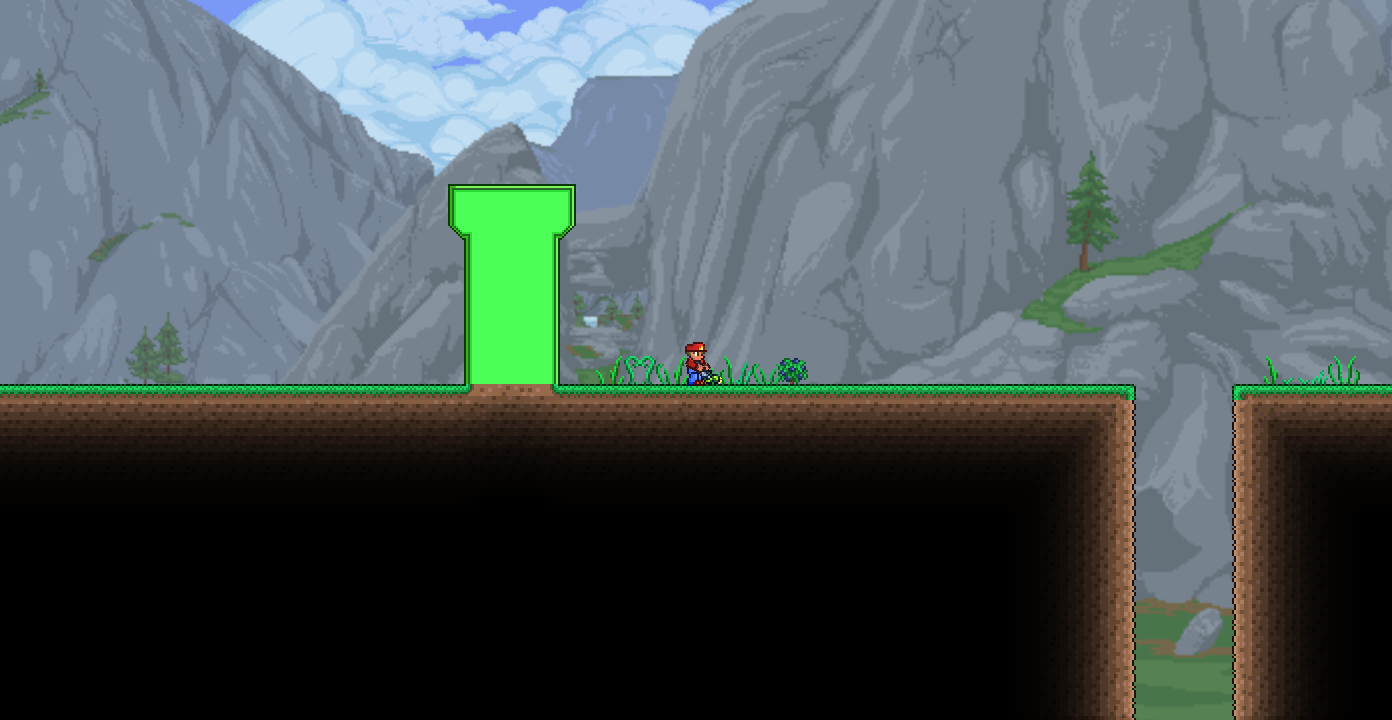 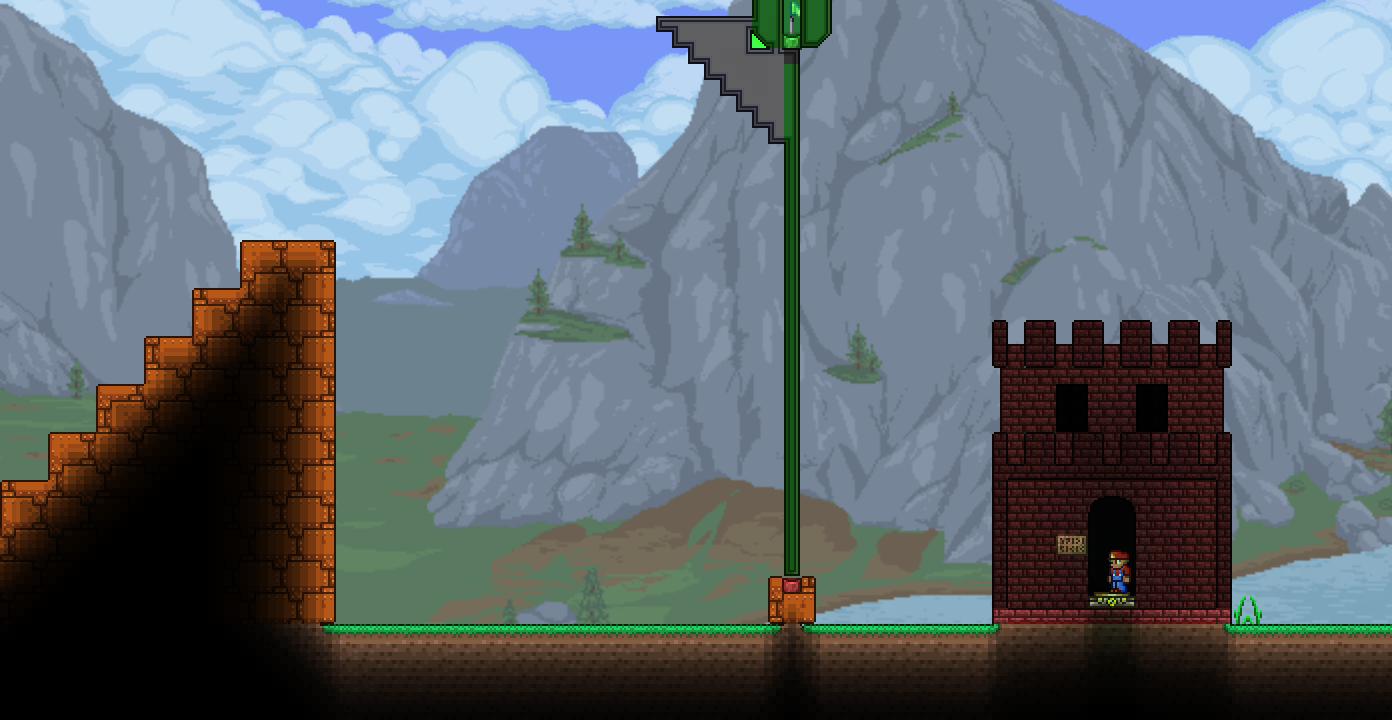 Every single brick and row of tall grass was placed with a "times 3" notion in mind. As in, for one brick in SMB, it would count as a 3x3 square set of blocks in Terraria, also accounting for how many blocks something was distanced by. i also considered 2x2, but felt it was a tad too small.
Death pits are about as lethal as their source, lined with a small thing of shallow honey + honey blocks to practically guarantee you need to use a Golf Whistle. soft dirt walls also mean little to no bouncing should you lean into one
The secret block is even in this level, too, but there's a pretty obvious hint as to where it may or may not be. Can you find the hint?
As you can see, the flagpole has two golf cups, though it doesn't exactly matter which one you get it in.

Sadly none of the blocks are functional, and neither is the secret pipe. This was due to the green gemspark blocks not meshing well with dirt blocks and me being too lazy and unwilling to continue this project, since for whatever reason I didn't enjoy making this in the first place.
I also can't exactly think of any useful functions the power-up blocks could have that would actually help your golf ball get to the end quicker.

Wanna continue this project? There's some dev notes right here that might help you get through

Once again, if you're planning to pick this up I recommend going with the "3x3" notion. Every block in SMB will go by this, including any spots of grass you may or may not use. Most grass start and end in the center of a brick, so you'd be reflecting that too, ideally. Though sadly, I don't think there's anything that's 3 tiles high. Unmowed tall weeds, maybe?

Of course, if you wanna go bigger or smaller, just keep the "notion" in mind. Wanna make them bigger, like maybe x5? Well, 5x5 blocks, and any blocks that're apart/grass in general, you need to account for that too.

The SMB Speedrun Wiki is your friend for full map layouts. I personally recommend using NES SMB for level construction, while turning to the All-Stars SMB for aesthetics -- especially so you can plant weeds and have mowed grass and soft walls for your death pits.

Finally, I originally planned to do all of world 1 + 2 (and MAYBE a minus level at the end) but I kinda lost my passion for this, so here's a couple of suggestions for some objects in SMB:
-Moving platforms should move (read: be actuated by a timer) only if they aren't above a death pit, if you wanna make them move
-The spring you can make Mario bounce off of should be made of Silly Balloons/Pink Slime
-How you're gonna do the puzzle-levels in SMB, I've got no clue of. Good luck with that.
-If you're working in secret pipes, try to make them all look the same and go down into the ground, but have everything but the secret pipe layered up by a row of echo blocks
-Speaking of echo blocks, if you're gonna work in the hidden blocks, try to hint your player at where they're at. In case it wasn't painfully obvious, I only used 2 blueberry bushes for the whole level. One's right under a block, so hopefully when the player sees the 2nd blueberry bush they'll think there's the hidden block nearby. I probably could've done better and only have a certain amount of blueberry bushes as opposed to just 1 in a line, doesn't look very cool
-You can kinda see how the shading makes some dark lines in between some boxes. I never got to it, but I think Illuminant Paint removes that?
-For underwater levels, apparently Bubbles can create a line for water and dry areas, so you could probably just slap Waterfall Walls everywhere and watch as your player suffers with trying not to hit the top and have their momentum drained.
-I'll try to add more thoughts
In any case, this map ended up becoming kinda brutal for golfing. Hopefully you enjoy this little, unfinished and unpolished setup. Shoutouts to TEdit and that one guy.

(edit: world file actually now in, check it out for yourself and feel free to entirely deconstruct it)