Nakano15 said:
Actually, the entire mod source is disponible on GitHub, you just need to look in the right place to find the sprites.
For example, the companion sprites are in Creatures folder, each folder is to a different companion (Terrarian companions will not have a sprites, obviously). Items... Well, on Items folder.

If you plan on trying improve the sprites, you will have to pay attention to where those sprites are placed on the companion, and do notice that some sprites, like Body Front and Right Arm Front doesn't exactly follow the other body parts spritesheet (that's to save virtual memory space).

The other thing, is that a sprite change may cause me problems in the future, even more when making new companions, but I could add them as an already unlocked skin to the companions.

Ps:. Also, Aseprite is awesome, I would have several problems splitting the companion body parts if wasn't for It.
Click to expand...

The problem is that the program is paid. If png versions were on there too...

But they are!
Just browse those folders: nakano15/giantsummon
You'll find the other sprites on the github page of the mod.

The only thing you'll not find is sprites for each split body part, but that already gives an idea of how the companions works.

Nakano15 said:
But they are!
Just browse those folders: nakano15/giantsummon
You'll find the other sprites on the github page of the mod.

The only thing you'll not find is sprites for each split body part, but that already gives an idea of how the companions works.
Click to expand...

pigman065 said:
The problem is that the program is paid. If png versions were on there too...
Click to expand...

I have a pirated version

^ that wow was a gasp btw

DinoZers said:
And yeah downloading the mod source on github was a good idea i saw the shazam131 idea of the Pig Guardian and man what a good idea
Click to expand...

Ah, only now I got what you meant, haha.
I'll tell him.

So I did the first and second frames.. Is this (first frame) good or should I give up?
EDIT: apologies if it isn't very clear, downloading then viewing would make it clearer

What's wrong with his eyes?

yeah... I'll change them back to the eyes from the original...

I have finished polishing the RococoBase!

Most of what I did was improve shading; it turns out that was really all he needed.
I also added claws because why not.

Well, the shading certainly is better than the ones I did, I guess?

The body front is the sprite shown on specific moments, like when your character is sharing the mount with Rococo, so It shows the left leg in front of the player.
Also, you had to show too his petrified frame too?

Nakano15 said:
Well, the shading certainly is better than the ones I did, I guess?

The body front is the sprite shown on specific moments, like when your character is sharing the mount with Rococo, so It shows the left leg in front of the player.
Also, you had to show too his petrified frame too?
Click to expand...

Yup, the last frame from the spritesheet.

Uh oh, I forgot to add the shaded sprite as a skin to the mod, I'll launch that on the hotfix.
By the way, update launched.

Wrath: "*I need to end this unending rage!*"

It is unknown where that cloud of anger came from, but It seems like It's a personality of someone split into emotions.
I'm pretty sure you'll try helping him reunite with his other emotions, and solidify his body, after you survive his warm greeting.
As long as you don't provoke him, he'll be able to help you during your challenges.

The dual wielding in the mod does what you expect, the companion will use two weapons in their hands, and attack with them. Currently, the system is
very simple, so the companion will use a copy of the weapon It is currently using on the other hand. You'll probably enjoy using It with ranged weapons, beside
currently, companions can dual wield any weapon. Enjoy while It lasts, because I'll build a whitelist for It, so you can no longer make your companion dual wield sniper rifles. 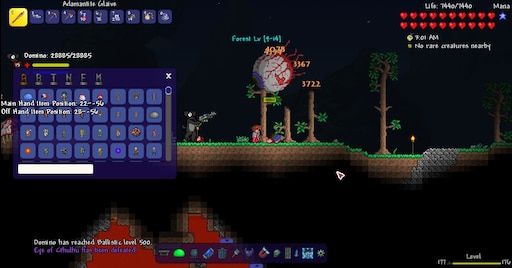 I did some sprite fixes on Blue, I probably wasn't the only one annoyed by the distance her arm was from her body. Fixed also a number of bugs related to companions recruit npcs, so now you can recruit Bree again, thanks to that.

What's to come and Planning

So... I plan on restructuring the Skills system. Instead of a from level 0 until, literally integer maximum value of leveling, I will change the system to, at least initially, level from 0 until 100.
With this change, I can make the companions gain some good status boosts based on their levels, includding extra status boosts or benefits depending on the level their skills reaches. That may turn their status leveling more interesting.

I've had also an idea of a different kind of game mode you could be able to trigger on a newly created character. Initially, the dummy name of the game mode is "Buddies for Life". To activate it, you would need to create a new character, and use an item that appears in your inventory and pick a buddy before 12 hours in-game time have passed (12 minutes irl), the buddies you can pick can be any companion that can spawn with the world, or any companion you have unlocked on other player characters. Upon activating the game mode on the character, you will be unable to turn It off (beside that could be changed, but I would need to make It in a way that is not accidental).
On that game mode, you can only have that companion as follower, and you will be unable to dismiss It. You can still meet new TerraGuardians and Terrarians during the gameplay, and also place them on your world to live, aswell as give them equipment normally through the GSI, but you will still be unable to call them as your follower.
With the game mode turned on, Ether Fruit and Ether Hearts will no longer be useable by the companion, either by their AI, or by manually making them use It. You will need to find them the items to increase their status. Possibly, maybe Life Crystals and Life Fruits be unable to be acquired as rewards from requests too.

That's actually the draft of the idea, I still need to think of the side effects and benefits that you could gain from playing in this game mode, beside since It's a thing related to friendship, possibly make both stronger as they venture? But the good thing of sharing the ideas in a forums is hearing people feedback, so if you have ideas, say it .

Well, that is it for this patch note, I hope you guys enjoy the update. :3

So may you'll add an whitelist config in the mod options?
And that sounds interesting

DinoZers said:
So may you'll add an whitelist config in the mod options?
And that sounds interesting
Click to expand...

If I do, probably on server settings. I think tModLoader has a way of setting up that.

Glitchy boi alert!
Here he is
(The UI that's supposed to follow the guardian appears in the bottom-left)
BTW you can ask me to make a new frame for Rococo if needed
Last edited: Sep 5, 2020

I'm not getting the glitch, she's stuck down there? The game soft locked? What is happening.
And what do you mean by new frame for Rococo?

Nakano15 said:
I'm not getting the glitch, she's stuck down there? The game soft locked? What is happening.
Click to expand...

No, she herself is in the right position, but the HP and chat UI that's supposed to follow her is misaligned.

Nakano15 said:
And what do you mean by new frame for Rococo?
Click to expand...