Pigman Δ said:
it's delta....
OK, so, I've played around with this mod for a bit and I have to say: it is broken.
Not broken as in 'doesn't work'...
It is EXTREMELY unbalanced.
So much so that I'm playing Awakened and Eternity Modes at the same time and it's possible.

If someone is going to play with this in a playthrough, enable Elements Awoken, Fargo's Mods and then those modes (which are part of those mods).
I guess Calam's Death Mode is acceptable too, if you insist on using Calamity.
Click to expand...

I kind of wondered that would happen, beside that's not only the reason why initially you could only have 1 companion following you, but also why I added the gem difficulty levels.

I really don't have ideas on how I could tweak the game difficulty around how many companions you have following you, without making that be like a punishment for having an one man army. I will need to give some thoughts about this.

So, what in your opinion is making the mod extremelly unbalance?

By the way, I did some changes to Rococo base sprites. I don't know if before the update I'll do more changes to It, just do you know.
The skin you made will still be displayed okay in the game, but wont have the body sprite changes.
N

I made the gem monsters have a higher chance of spawning, based on the companions you have following you and their max health. I'll have to buff the 2+ gem monster appearance rate, to turn the game more interesting when you have an army following you.

Well, that is all for the update. Enjoy your gameplay
And sorry for the delay, things went a bit upside down in my life those last weeks, but I'm slowly trying to catch up my pace.

Edit:. And adding to the apology list... Here's a hotfix.

Fixed a bug on the guardian npc inventory management hud, which the mod used the incorrect flag to set outfit and skins.
Whew, I'm sure I'll have to add more dialogue options on the companions. Probably add branching dialogues.
Last edited: Sep 24, 2020
N

I've launched a hotfix today, fixing the give up key not working.

Fixed the give up hotkey not working.
This will only be necessary if you play with the option of player knock out on.
N

Another hotfix launched, this one fixes an issue with the Buddy Mode setup interface.

Will, soon you will be able to see your guardians wear armor sets?

That would look really strange. Michelle and the Armour Wrath already do show it tho, cos they have a player shape, but any other one would look odd with armour shown.
N

The problems of adding armor set sprites for the companions, is that It would be one hell of a work for me to do.
Terraria has over 50 equipment pieces that can be seen on the character when equipped, spriting them all will give me a lot of work.
Also, I'm having develop the mod with only 2GB of ram disponible on my pc, so I'm really having to save space on It, or else I wont be able to play or debug the mod anymore.

The only way I found of kind of solving that equipment trouble, is by adding Outfits to them.

Hi! I have a horrifically stupid question.

How does one actually find all of these lovely guys 'n gals to recruit them?
N

ShadowTiger said:
Hi! I have a horrifically stupid question.

How does one actually find all of these lovely guys 'n gals to recruit them?
Click to expand...

Searching is the answer. The Dryad can also give you tips on companions you can find.
N

Well, looks like I was wrong, here comes a bug fix update. At least isn't a hotfix :3.

Monsters will get a damage received reduction when you're travelling with companions.
The initial damage reduction is of 10% damage.
If you have more than 1 companion, the damage reduction stacks increases by 20% of the current damage reduction, for each companion.
Reduced the visit rate of companions.
Added a configuration option to turn on/off the companions that doesn't live in your world, to visit It sometimes.
If you don't have another reason why they shouldn't visit, this can also be useful if your computer has low memory.
Your companion will no longer try jumping when your character is mounted, the companion is falling and about to hit the ground, taking fall damage.
Added a flag to to avoid multiple option clicks on dialogues.
Leopold got a revamp on some of his animations:
His right arm position on several frames were changed.
Changed his arm animations when walking and hopping.
Did changes to the arm position when when sitting.
Changed his revive animation.
Added a frame for when he's sitting on a chair.
The books he read are now bigger.
Moved a pixel down the third frame of the attack animation.
Fixed the talk quests not working correctly, when you speak with a companion npc.
Ensured that companions will no longer try opening gift boxes when using furnitures.
The number of town npcs will now influence on the appearance rate of Brutus.
If you have more town npcs, Brutus will most likelly show up.
Changed the sprite of Vladimir arms when jumping.
No longer a falling cactus.
I did some changes to the companions melee combat AI, to try fixing some issues related to It.
Removed gender reference on the message of friendship buff unlocked.
Some of you guys may have the hair rising upon reading the first change on this update, and I tell you not to worry.
The damage reduction isn't really absurdly high, but having an army following your character will no longer make combat extremelly trivial.
Gladly due to this, I didn't changed the player, companions or npcs status.

I did also a number of changes on Leopold sprites, I hope they are better now, beside the most troublesome animation was his Reviving animation.
On the list of those who I need to change the revive animation, contains Bree and Vladimir. If you know any other companion that has weird revive animation, feel free to tell me.

And possibly the companions will behave better when in melee combat. I found out that the reason why the melee combat was so weird, is because two sessions of their combat AI were clashing with each other, because the condition depended on the currently held weapon type. The combat behavior isn't 100%, but at least now the companions have some ideas of bounds.

I guess that's all I can say about this update.
Have fun
N

Another update is out. Not only you can have more companions living in your world, but also some of them got sprite changes.

Added option to disable the damage reduction based on companion count.
Increased the number of companions living in the world from 10 to 30.
Since the companions no longer uses town npc mask to exist, there isn't really a problem in rising this cap, other than your computer capabilities.
Removed sneaky debug message when companion spawns.
Changed Bree's reviving animation.
She will no longer... Whatever was that.
Changed how the bag Bree wears is drawn.
Will be helpful when I add outfits to her, but may be a problem if I add more skins, and someone actually likes the bag.
Made Bree's chest attract less attention.
Companions with charge AI will no longer behave like being in a trampoline, when they are trying to attack a monster that is above them, and they are in horizontal range.
Fixed Domino's Max Health, nerfed It from 1420 to the 1000, which was the original intention codewise.
He had more health than Brutus himself.
Changed Vladimir's Revive animation.
Fixed a bug where you couldn't report requests that failed because someone was defeated, when shouldn't.
Made Malisha's chest attract less attention, too.
Fixed Brutus feet sprites.
Also changed his leg sprites for some animations.
Fixed a problem with requests asking to participate of an event.
Due to that, requests needing you to participate of an event will now only ask you to do that once.
Well, one of the changes I have to talk about, is that Domino got a health nerf. His health math wasn't resulting in 1000, like I originally intended, and I believe It's because of a windows calculator problem I've noticed before. I managed to change his health status, but probably will need to check the other companions health math too, to see if their health will give exactly that expected number on the max health.

I also added an option to disable the damage reduction based on companion count, in case the game is hard enough for you without It.

I did some changes on Bree sprite, splitting her bag from the body, so It will be a lot easier to make her outfits in the future. That also made me change Bree and Malisha chest sprites, to make their shading attract less attention. I don't know if I will need to change the chest of the other companions, but probably wont for Mabel.

The revive animation Vladimir also got changed, because even though he was trying to help someone stand up, without falling on the one he's trying to help, It could easily look like he's doing something else. I know that he was just trying to help, but some may not think so.

And fixed two bugs related to requests, which could cause some requests to not be completeable at all, and most of them related to Brutus new skin.

Well, that is It for this update. Enjoy your expanded town. :3
2

Can you make the TerraGuardians look like they belong in Terreria?
N

Sprite wise? No.
Even though I'm still improving my sketching skill from time to time, I don't think I'm able to replicate Terraria's shading and drawing style.
But I'm glad to say that their sprites could be worser, and happily they aren't.
2

And that was the last time 27dschild was seen in this thread.

That's because they use different scripts that requires the player to have their effects.
Currently, there is no way of making custom weapons work as intended for companions, because not only I'm still thinking how I could add such compatibility, but I also don't use most of the mods that adds such items.

So, I'm trying to make a new companion for the Halloween, and managed to make her like this: 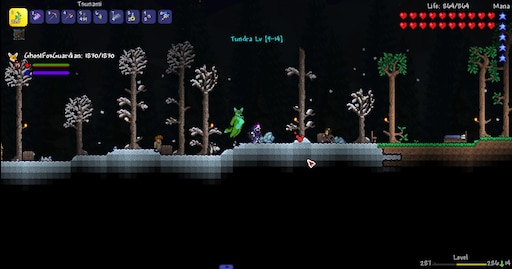 steamcommunity.com
I tried changing the head sprite to make It be less disconnected from the body, and now It looks like this: 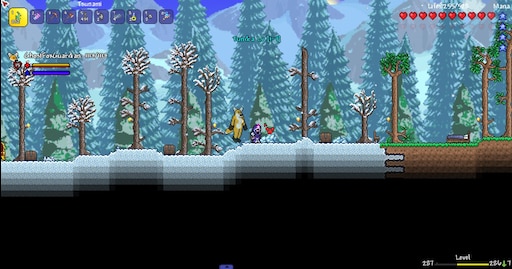 Steam Community :: Screenshot :: I did a change to the head sprite of the companion. I think It looks better, what do you think?

Steam Community: tModLoader. I did a change to the head sprite of the companion. I think It looks better, what do you think?