I think the mystery intensifies. Or maybe some mod that updated, changed something that caused the problem not to happen anymore.

Will there be ai improvements later on?
I honestly want to see the companions try to jump over gaps with me
Or use wings and stuff to fly.

Svelt_ said:
Will there be ai improvements later on?
I honestly want to see the companions try to jump over gaps with me
Or use wings and stuff to fly.
Click to expand...

I don't know. My intention was trying to make them smarter when travelling with you, but I don't really have ideas of how I can check when they should jump over gaps, and if It's safe for them to jump.
I've even made an AI to check where they will land, but had to disable due to issues with It.

I can see if I can make them smarter at finding out when they shouldn't fall.

Skill tree? And what that skill tree would benefit on? Or even how It would work?

For these upgrades need materials.

The skills themselves already does that, beside the system Itself may need changes, since the current way isn't really great. 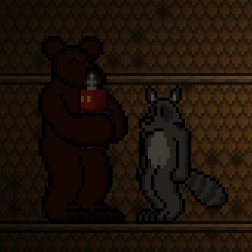 Well... If you didn't managed to get the pig guardian, at least probably you got the deer guardian.
And I thought I had fixed that bug where her head is not planted on the land.

@topic Well, the next update is getting close to be done, but I really wanted to get a secondary companion that I've been secretly developing ready, and launch with It.
I can't wait to introduce the new companion coming next update, heh. Beside people who peek github probably already knows her.

Nakano15 said:
Well... If you didn't managed to get the pig guardian, at least probably you got the deer guardian.
Click to expand...

I lost that fight.

I got caught on his jump attack and I could not escape his chokehold. Despite how fast I was pressing the jump button lol.

You can always try again the next time you find him. Be sure to bring an army if you think he'll give you some trouble.

TerraGuardians can do construction commands.
1. Use "Construction" command
2. Select the area.
3. Choose what to do.
- Clean the area (block, wall, block and wall) [need pickaxe, hammer, axe]
- Fill the area [use the item on 0 slot]

That would be very interesting, but I would need to elaborate how I would create the system.
The problem is that I'm not really into modding Terraria right now, so I don't think I'll even try making the system.
I'll probably only try releasing the next update, and then give a break.

Nakano15 said:
That would be very interesting, but I would need to elaborate how I would create the system.
The problem is that I'm not really into modding Terraria right now, so I don't think I'll even try making the system.
I'll probably only try releasing the next update, and then give a break.
Click to expand...

It is also better to take breaks to make everything easier.

Minerva loves cooking, she even experiments her own food to see if she's improving in her skills or not. That also had a side effect, which you can see on her.
If you want to see her happy, just eat something she makes, and tell her that It's good.

Companion wise, she will be very helpful if you don't want to make your own food. The only moments you can ask her to cook is during the day and night. If you ask her to cook again at the same daytime, she will refuse.
She wont be interessed into joining your town after you meet her, but if you end up helping her everytime she visits, she may actually decide to try her cooking skills in your world.
Due to her constitution, she may also be helpful on your adventures, just keep in mind that she's quite heavy.

This update actually brought quite a number of cool stuff, but some of them I weren't able to develop further. As you can see above in the topic, I'm not really into modding Terraria right now, so... I just finished this update, because of the lots of things that It brings. Of course, If there's problems with It, I'll try launching a hotfix.

One of the changes is related to the targetting system. Now the companions will take some extra things in consideration, when looking for a monster. When in a group, they will check if hostile is near their group members. When not in a group, will check if nearby allies are in danger.

The other changes is that I tried to make more use of the companions chat. Now you have more interactions you can do with them, and may directly do some things that you would do only at the Guardian Selection Interface, directly through their chat box. One of them is calling and dismissing them from the group.

There is also the addition of the Dialogue system, which is still in development somewhat, but at least part of It is functional. The intention I had were of adding topics you could speak to the companion, which allows you to discover more about them, their origins and other things. The problem is: I didn't really got to develop that further, so there isn't actually companions with backstory dialogues disponible right now. The only thing you can do with this system, or at least one of them, is play RPS with Rococo. You won't gain anything from playing RPS with him, but at least you can pass the time.

The messages the companions showed to you when friendship level increased were removed. The reason for that, is that It's really awkward for me to write them. I were trying to make them be meaningful and touching, and It didn't worked. Sometimes, I had to spend a loooooong time trying to think of something that would actually reflect how far in friendship level you reached with that companion. I'm actually glad It's gone.

The 2 combat AI attributes I've added will make the companions more unique in combat. The addition of the Trigger and Agility are to make the companions have distinct behavior during combat, and make It simulate more like as if was a player actually doing the battle. I don't really think that will hinder you much, beside low Agility will probably give you troubles against fast enemies.

Well, I guess that's It. I'm not sure how I'll give continuity to this mod, but depending on how It happens, maybe It will only be to add characters.
There are a number of TerraGuardians on hold right now on the sprite development, and one of them is mostly done, beside needs a few sprites related to the recruitment method, and also It's special skill. Let's see how that will end.

Edit:. The last update of the mod was at the end of October of the last year?! Holy...
O

The update seems to have broken something, I get this error log any time I try to use the mod.

I can't really get much thing useful from that error log, but I'll try doing some experiments with mod loading to see if I can find the problem.
I wonder if It's related to SubworldLibrary.

Edit:. It's related to SubworldLibrary.
I'll have to try changing how the SubworldLibrary stuff are called on the mod, but I will only be able to do that change later.

You can try rollbacking the version through the Github page, but that will cause Minerva to be a Unknown companion, if you found her.
Last edited: Jan 19, 2021

Removed all the support to SubworldLibrary...
Added some missing dialogues to Minerva.
I really disliked having to remove the library entirelly, but It's worse to have It be obligatory to play the mod.

I'm actually still experiencing an error, even with the hotfix. I'm still getting this error with a clean install of tModLoader (so no other mods installed).