In this case, ok, terraprisma apparently will attack everything that approaches (maybe only if someone arrives on the right initially): 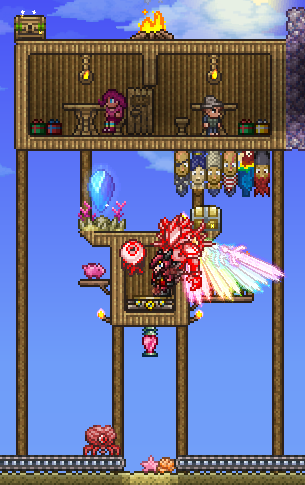 But in this case it will only attack only those who pass through the blocks apparently: 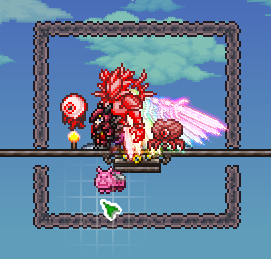 Terraprisma doesn't enter attack mode if it doesn't have line of sight with a mob. However once it starts attacking, it goes through blocks and wipes out everything that's on screen.

That said, line of sight is determined individually for each blade from the "handle" of each blade thus when you stand with your back to the wall, blades that end up on the other side will not be blocked by said wall and will attack anything that it can directly see.

That's based on my experience anyway.

PS: Good way for dealing with those high damage (one-shot on master mode) projectiles from Flow Invaders is to build a room with 2 block thick walls and stand with your back against those walls, your Terraprisma blades - 2 will attack those Flow Invaders fine; as long as they are on the side of the wall your Terraprisma blades are on.
You must log in or register to reply here.
Share:
Facebook Twitter Reddit Pinterest Tumblr WhatsApp Email Link
Top Bottom