-Make goblin thieves actually thieves - they can now steal items from chests. When they have stolen enough items (about 100, say) they will attempt to run offscreen and despawn, taking all of your items with them.

-Worm enemies destroy blocks when they move through them.

-Undead miners have a chance to carry pickaxes, which allows them to mine through tiles the same way a player does.

-Wood and other flammable substances can burn when near lava. They may also ignite if a flammable block is placed directly above a torch or >3 blocks away from a live campfire. Fire attacks from players or enemies also ignite flammable blocks (like sunfury, flamelash, or fire imp fireballs)

Natural disasters. These will randomly occur and can be destructive to your world.
-Volcano: if mountanious terrain is nearby, it may be labelled as a "volcano" on world gen. It will randomly erupt, spawning lava and falling boulders that explode on impact with tiles, creating bomb-size craters.
-Earthquake: all tiles connected to the ground will be destroyed.
-Tsunami: if you are near the ocean, an animated wave of water blocks may travel over across the shore, flooding everything on the coast.
-Tornado: a tornado (like the Duke Fishron water tornado but white) will appear and slowly move across the terrain, destroying the blocks below it. Nearby blocks will be dislodged and thrown into the air, and when they land, they place as a full block again. If it happens to spawn in an ocean biome, it will be a typhoon, which is only an aesthetic change
-Hurricane: Near the ocean, a hurricane may occur, instantly causing a monsoon event, as well as making blocks randomly break.

Fixed a bug where terraria existed.

Removed the zenith from the game. Wait that’s actually not a bad idea

Derpling Ω said:
Removed the zenith from the game. Wait that’s actually not a bad idea
Click to expand...

Fixed a bug where human beings and all species could play terraria.
only bots can play now.

All your ideas can't overshadow cracked dungeon bricks in angled passages anyway. It's fine if it's part of a trap, because I have Spectre boots by this time, but GOD DAMN the Dungeon was designed to be fight in tight passages and large rooms, not to grind (and I do mean it!) through the blocks with smart mining (but it always targets unbreakable dungeon block lmao), while literally everyone can pass through and hide behind these blocks 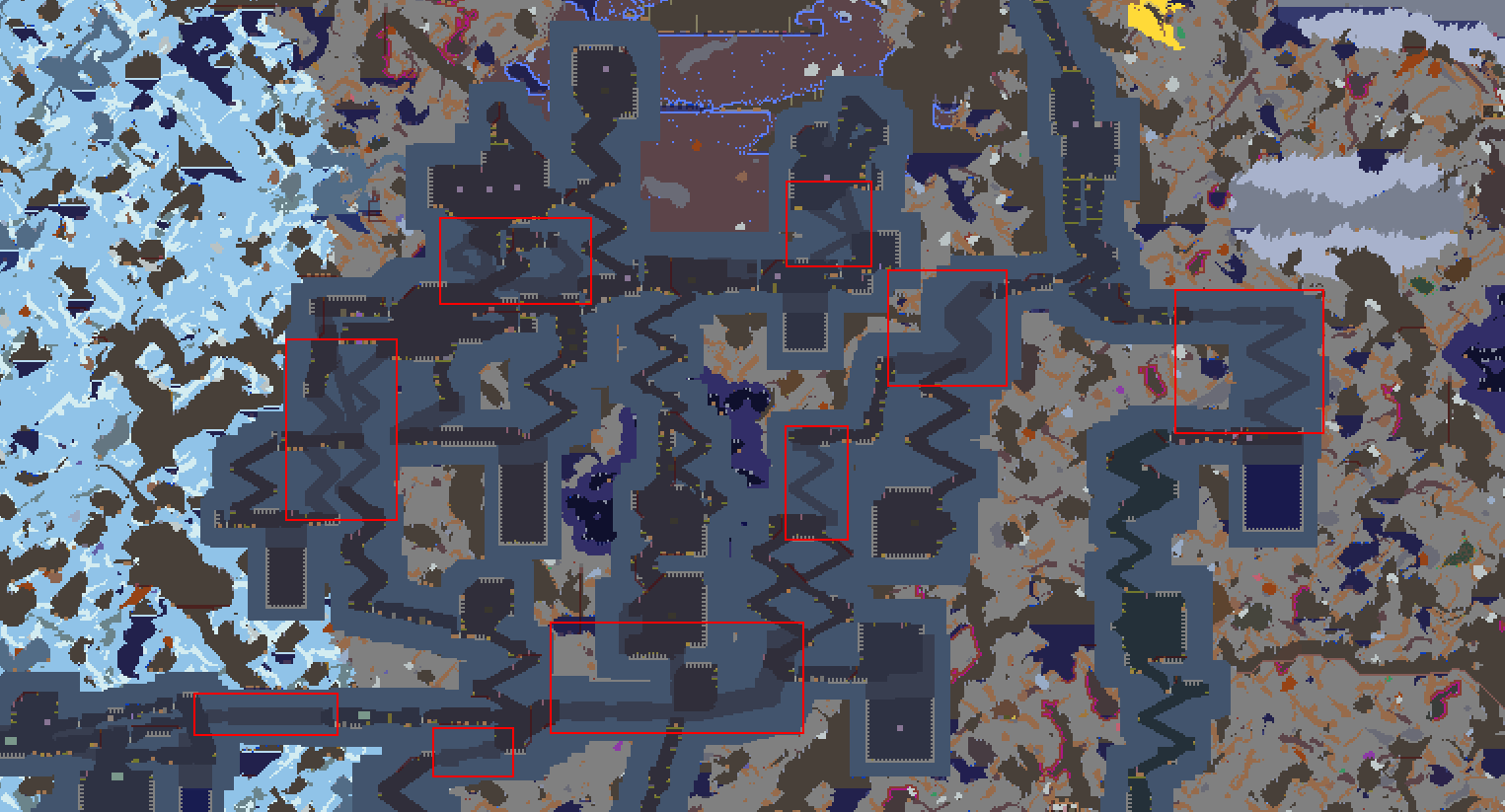 Stolaire said:
All your ideas can't overshadow cracked dungeon bricks in angled passages anyway. It's fine if it's part of a trap, because I have Spectre boots by this time, but GOD DAMN the Dungeon was designed to be fight in tight passages and large rooms, not to grind (and I do mean it!) through the blocks with smart mining (but it always targets unbreakable dungeon block lmao), while literally everyone can pass through and hide behind these blocks

I don't really think it's too bad considering that they took away the hardest part of setting up a dungeon fishing spot. Also, it's not really that tedious to mine through either with smart cursor's help. It's faster than normal mining.

A whip that has no synergies with any minions. Oh and it should also come right after the firecracker, one of the best whips in the game.

Fixed a bug where there is dirt in terrarai.

Excuuuuse me, but now it is in appropriate place

Boss/Events
Golem is a hardmode boss, found at the end of the jungle temple. It has high HP, high defense and multiple tricks in his behavior. He is definitely one of the hardest bosses in the entire game. Players should be physically and mentally well prepared before taking him on.
Generally speaking, you *do* have some chances to defeat him with cheated in Lunar-tier weapons and Terraprisma, but it is not guaranteed.

Terra Blade: this sword can barely handle its first phase and completely useless at the second one. Being “forged from the finest blades of Light and Dark”, this sword accepts only true, cell-powered Heroes.

Seedler is not viable too, because golem hands catch its “coffee bean” projectiles and make the special drink out of them, for him it is equal to Endurance potion with 99% DR.

Scourge of the Corruptor is particularly dangerous to players, as tiny eaters become hypnotized by the mighty “Eyes of the Golem” and debuff your character in the same manner as Red’s potion does. All projectiles spread corruption.

Vampire Knives have a special ability to heal the boss thrice as fast as you deal damage to him. Not recommended, for obvious reasons. They are even more dangerous if you have Stake Launcher in your inventory. It counts *you* as a Vampire and becomes Golem’s ally, dealing 10x damage.

The combination of Desert Tiger Staff and Firecracker is especially cruel. Armored adult tiger travels back in time and becomes a little kitten. Instead of attacking the boss he tries to play with Firecracker, putting himself in danger of self-explosion.

Chain Gun works fine only for 5 seconds. Shortly after, it overheats and tries to free itself from its chains to cool down. They, of course, bind the character and you are unable to move.

Dart Pistol and Rifle arrange “Darts” competition among themselves. The “Bull’s-eye” is your character’s eye. Coin gun usually tosses a coin and decides which weapon starts the first.

Zenith. One of the weapons that can defeat him in less than an hour. You may need to buy it from a secret NPC, named after TEdit. Item ID – 4956.

Despite their damage being reduced to 1 it this fight, Terraprisma’s swords are the only weapon loyal to the Player. After several hours of fight, they helped me to defeat otherwise impossible boss. Also pretty easy to obtain pre-Golem. Recommended in Master mode + For the worthy worlds.

Broken copper shortsword. I never ever tried this myself, but a lot of people say that it is broken indeed. They simply can’t lie! It is also rumored to scale stats with progression.

Pearlwood sword – an ultimate, hardmode version of shortsword. It is overupgraded though, because is not even 'short' at all! Immense range (size matters, and we all know it), more than doubled damage for noobs, who didn’t manage to defeat him with the original.

For those who interested, aside from stupid jokes, a huge update to the Moons Guide (a proper one, not like this) is going to be released soon, maybe tomorrow

Clowns now blow up blocks again like they did in 1.1.

All abandoned houses should be covered in ash

There is now a temperature system.

RockaBen99 said:
Fixed a bug where the goblin tinkerer would reforge items than less than the price of your soul.
Click to expand...

That was less than the price of my soul?

terraria now requires your gpu to be the illegal nvidia 4000 series to play.
else you cannot

The entire underworld is filled with abandoned houses you have to clear for your Wall of Flesh fight, and those houses are filled with lava.

Etotheipi said:
The entire underworld is filled with abandoned houses you have to clear for your Wall of Flesh fight, and those houses are filled with lava.
Click to expand...

removed all existence of console and mobile terraria

look for a truffle worm in the mushroom biome. find an ocean. Oh and, you must reforge your copper short sword to legendary and have wooden armor equipped for the event to spawn. If you use the truffle worm as bait, you will fish up a magic mushroom scroll, making all trades will the truffle 89% cheaper.
You must log in or register to reply here.
Share:
Facebook Twitter Reddit Pinterest Tumblr WhatsApp Email Share Link
Top Bottom