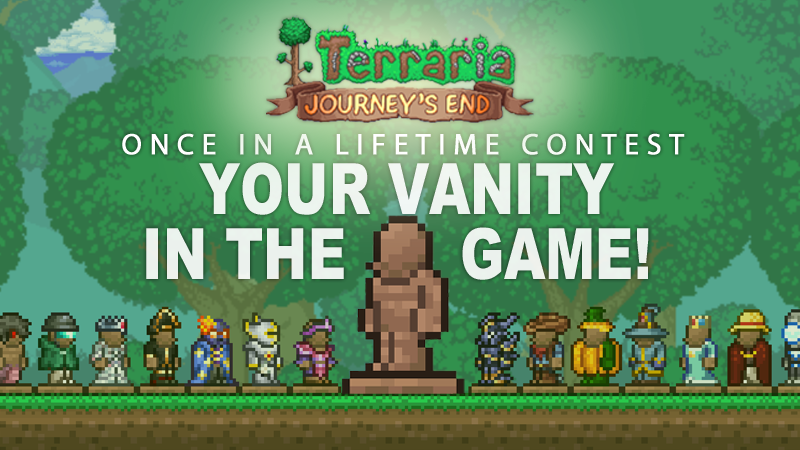 We are but a few short weeks away from the launch of Journey's End! We know that all of you are just as excited as we are for the release of the fourth and final major content update for Terraria... but we also know that you are equally excited to find which fan-generated vanity sets will be making their way into the game.

After a journey of over 7,000 entries, 431 Semi-Finalists, 25 Finalists and then counting more than 143,000 votes from the Terraria community - we at long last know the winners of the Journey's End Vanity Contest!


If you did indeed present a winning entry, Loki will reach out to you on TCF PM to gather contact information so that we can handle the legalities and then go over the process of how your design will make it into Terraria!​
We will present the Top 3 winners in the order that they finished in the fan vote - and then maybe share a few surprises at the end. So, without further ado, the envelope please! 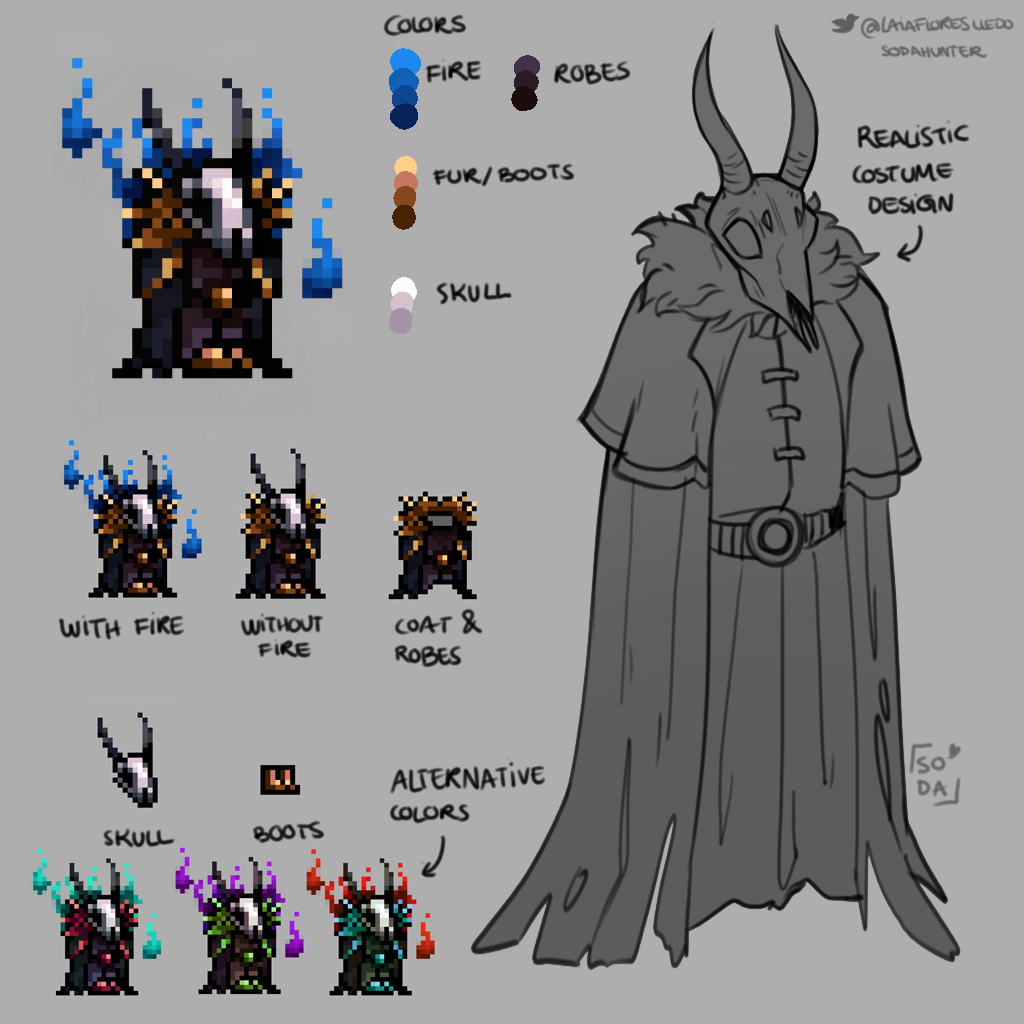 Far and away the top vote-getter, SodaHunter's entry finished first in points, total First Place Votes, and in total votes received - and by a large margin in each category. Clearly, the people have spoken and they loved the idea and execution behind the Plaguebringer's Robes!

The competition really started to heat up and was a LOT closer once you got past First Place. After the dust had settled, crowflux's mysterious, masterless samurai warrior stood tall in Second Place. This will be a unique addition indeed that Terrarians everywhere will look forward to proudly sporting as they battle the relentless foes in Terraria!

A popular fan prediction to come out on top, Timeless Traveler ultimately emerged from the space-time continuum in Third Place, edging out some very tough competition right on its heels. We still do not know what is peeking out from inside that robe, but we hope that knowing they will be making it into Terraria will keep their wrath at bay for the time being! 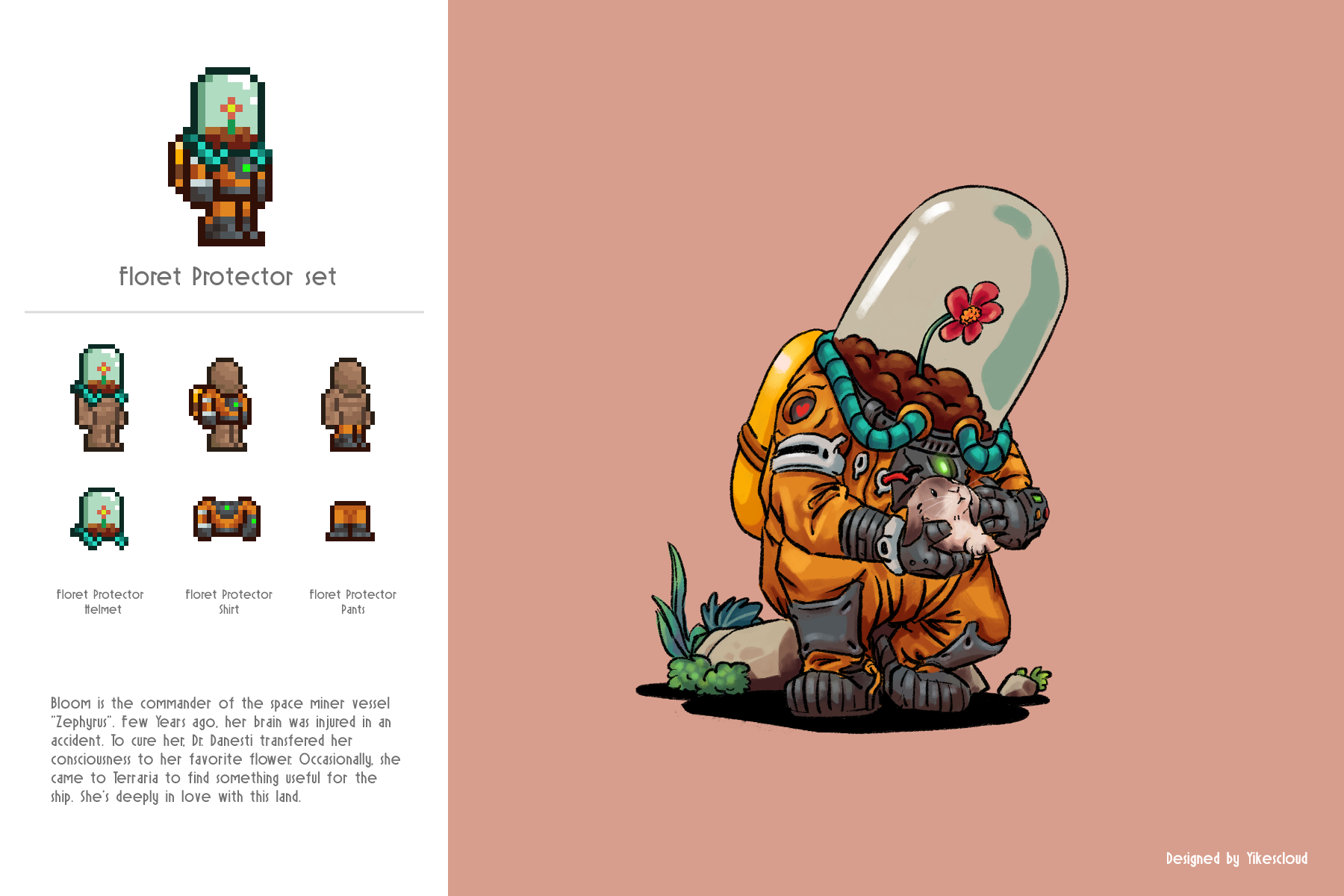 Clearly, the Terraria Community went with a very clear theme when you look at our First and Third place winners - and while we did want to honor those selections, we felt that having a bit more diversity in what makes it into the game was the right way to go. So, as we told you on the livestream - we will do the Top 3 and beyond that, we will do what we want.

With that said, we are happy to share that we will be adding a Fourth winning entry to our list of champions and also adding this design into the game. It is our pleasure to reward our Fourth Place/Honorable Mention to the very cool and very "Terraria" Floret Protector.

(We seriously still want to know what is animating the dirt blocks in that suit... earthworms?) 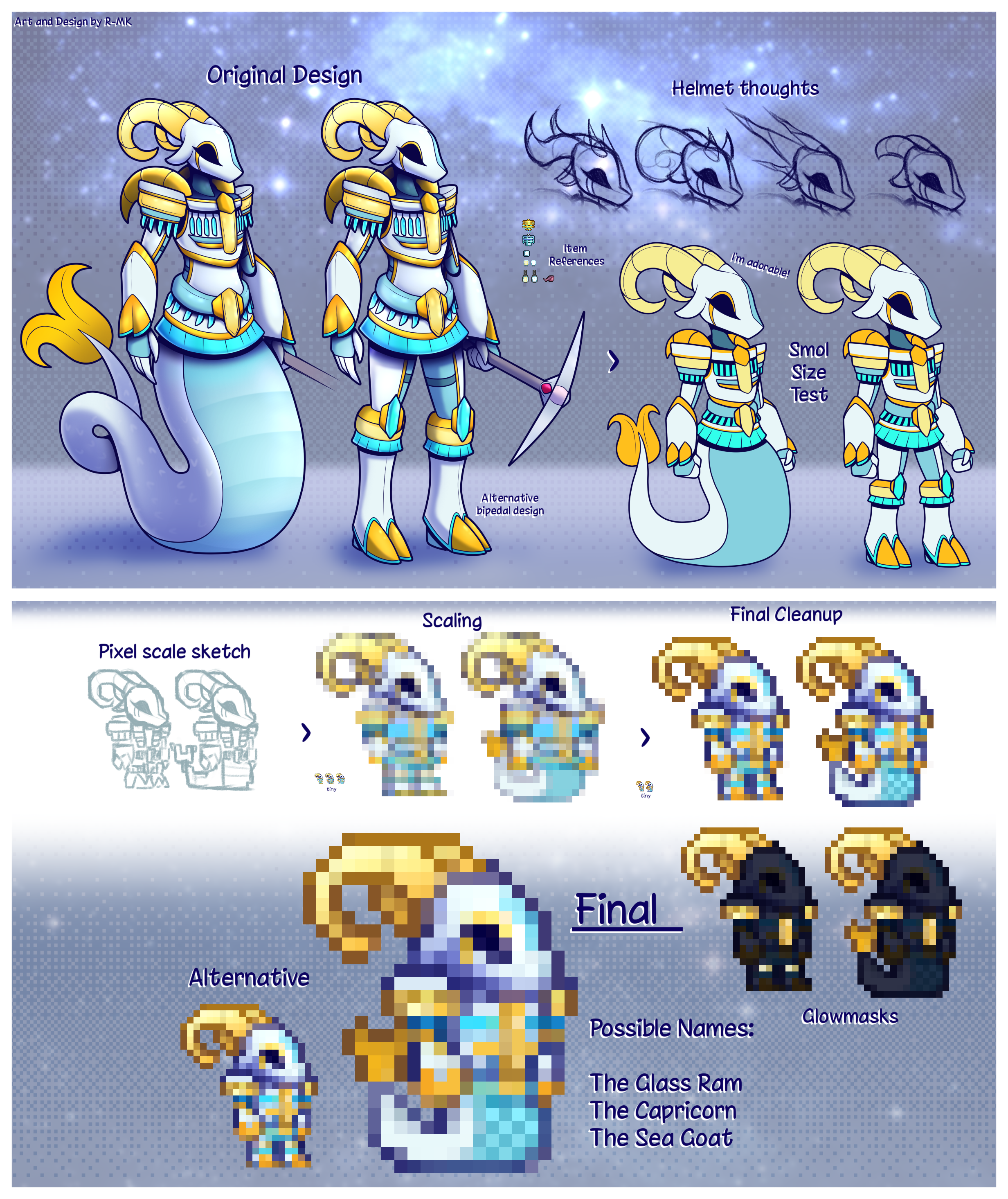 Once again, we did say we would do whatever we wanted outside of the Top 3... and so we decided that we would add a fifth winning entry. This one was based on a team vote based on the remaining entries... which narrowed us down to two that were in a dead heat. For the tiebreaker, we turned back to the fan vote, where one entry had a clear advantage over the other (finishing a full 9 slots ahead). Thus, the bright and vibrant entry from R-MK makes the final cut! We found this design to be quite unique, hearkening perhaps a bit to a Desert theme, but with a style all its own.

​
So, that's it - we left the toughest decisions out of a brutally hard whittling-down process to you, the fans, and your voices have been heard! We have been thrilled by the overwhelming response to this contest - both in terms of the quality and quantity of entries, the engagement and fun of the livestream finalist reveal, and the massive pile of votes you all submitted. We think this list of winners has a bit of something for everyone. Hopefully you will agree, even if your favorite didn't make the cut! The voting was VERY tight once you got past First Place - so each and every finalist should be holding their head very high right now.


Join us in celebrating the winners and looking forward to seeing these awesome designs make their way into the world of Terraria very soon!

We will be happy to answer questions and look forward to seeing your reaction to this worthy group of winners!
Last edited: Apr 26, 2020

Well done to all that participated and congrats to the winners!

Congratulations to all those who won the process! Nice to see that you did not only let the people here decide, but also voted amongst yourselves!

A question, are all the animations for the Timeless Traveler making it in?
H

GG WP to the finalists! See you in the game!

Congratulations to all who participated. Im so happy these are going to be vanity items

Congrats to the winners! These are all so amazing, I can't wait to see them in-game.

Ayyy congrats RM-K!
Congrats and nice job to everyone else that participated as well!

Congratulations to everybody who won! Here's to advancements in customization for all!

Staff member
Administrator
Congratulations to all five of you. I can't wait to see how the Re-Logic artists will transform your ideas into Terraria items.

Horns + 'Plague Doctor'-theme is the way to success...


Loki said:
We think this list of winners has a bit of something for everyone.
Click to expand...

Sadly not for me.
W

Wow, there are really good

Very excited to see all these added to the game!

Loki said:
Clearly, the Terraria Community went with a very clear theme when you look at our First and Third place winners - and while we did want to honor those selections, we felt that having a bit more diversity in what makes it into the game was the right way to go. So, as we told you on the livestream - we will do the Top 3 and beyond that, we will do what we want.
Click to expand...

This is the highlight for me TBH, because as great as it was for these all to win -- there were A LOT of equally great contenders I'd love to see implemented.

Wouldn't mind a Journey's End Vanity Patch eventually that adds all the finalists AND maybe some other dev surprises.

YES MY ZODIAC GOT IN

Man, I kind of wish I'd gone with a skull head instead of a TV.

While these are all great, I just

ing need to see a dragon vanity in the game, and I mean a proper dragon vanity and not a noodle like the "wyverns" are. (Seriously, they don't even count as actual wyverns.)
In any case, before I get too far into this demand, congrats to the winners.

Dr.Zootsuit said:
Man, I kind of wish I'd gone with a skull head instead of a TV.
Click to expand...

We were kinda surprised that everyone picked so much goat skull as well - but those are your votes!

Aww.... hopefully modders can add the others, because absolutely none of the ones I voted for ended up in the game.